I know what you’re thinking. After so many games optimizing your engine to maximize production so you can execute multiple chain-reactions building, harvesting, executing, developing, and rerouting your trains on a foreign planet, underwater, in the winter of 1843, what you’re looking for is a quick-hitting card game. Something light enough to bang out in 30 minutes or less, but interesting enough to merit replays. Something like a Spiel des Jahres nominee from 1998 with a terribly inaccurate tagline “The Game Where Size Doesn’t Matter!”

While there are several incarnations of illustrations, the 90-card deck is divided into five colored suits, each numbered from 1-18. Deal 15 cards to each player, and you’re ready to go. (Depending on your player count, you may need to remove corresponding high cards from each suit, but the entire remaining deck gets dealt out evenly.) 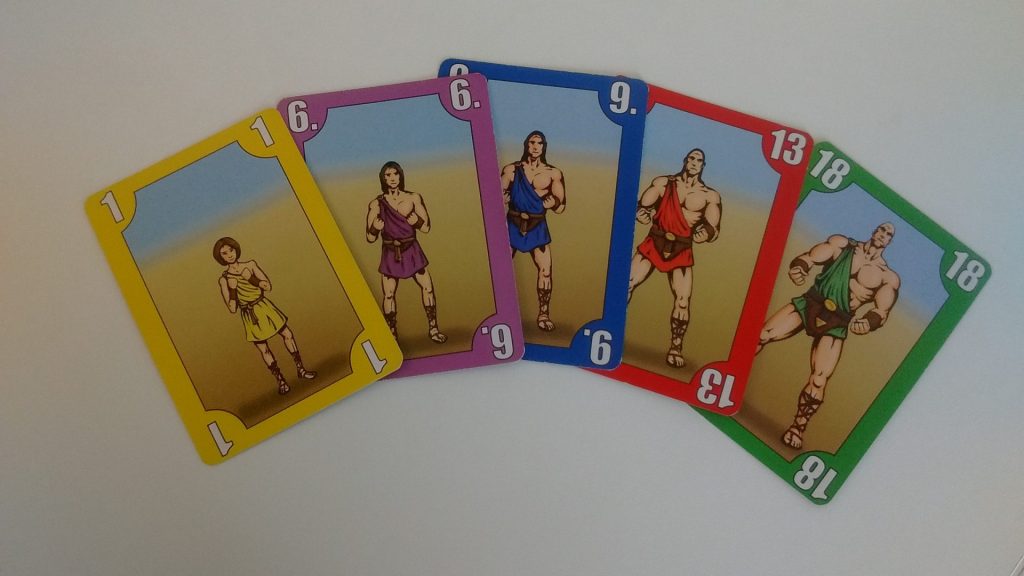 Things to look forward to as you grow: Bigger muscles and a receding hairline.

The player to the left of the dealer plays one card in front of himself, and play rotates clockwise. Each other player must follow the lead suit if possible. Once everyone has contributed to the trick, David and Goliath are determined. The highest card is Goliath, and whoever played Goliath collects all of the other cards of the trick. Whoever played the lowest card – David – collects Goliath. It usually takes a few tricks (and sometimes a game or two) to figure out who gets which cards, but once you comprehend the mechanic, that’s where strategy comes in.

If you can’t follow the lead suit, you may play any card of any color. Unlike Hearts or Spades, where there is a dominant trump, the number is the only value of importance. The lowest numbered card of the trick is always David. The highest numbered card of the trick is always Goliath. What if you can’t follow suit and play the same number of a different color? The latter played takes priority. The last card laid of the highest number becomes Goliath. The last card laid of the lowest number becomes David. Leading with a 1 won’t always get you a coveted 18, and even if it does, it may not be the color you want. 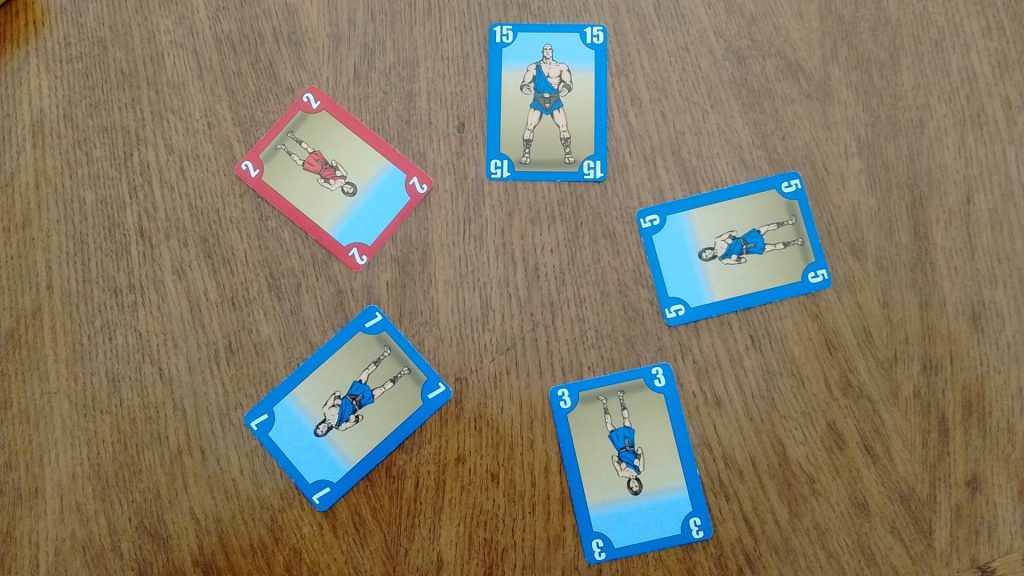 Red 2 (David) collects the Blue 15 (Goliath). Goliath takes all of the other cards.

Each player divides collected cards face up, divided by suit. If someone has two or less of a suit, those cards are worth their face value. Once they collect a third card of that suit, cards are worth one point each. When you’ve cleverly figured out a way to get that 17 and 18, you can be certain people will figure out a way to slough you that undesirable third card. 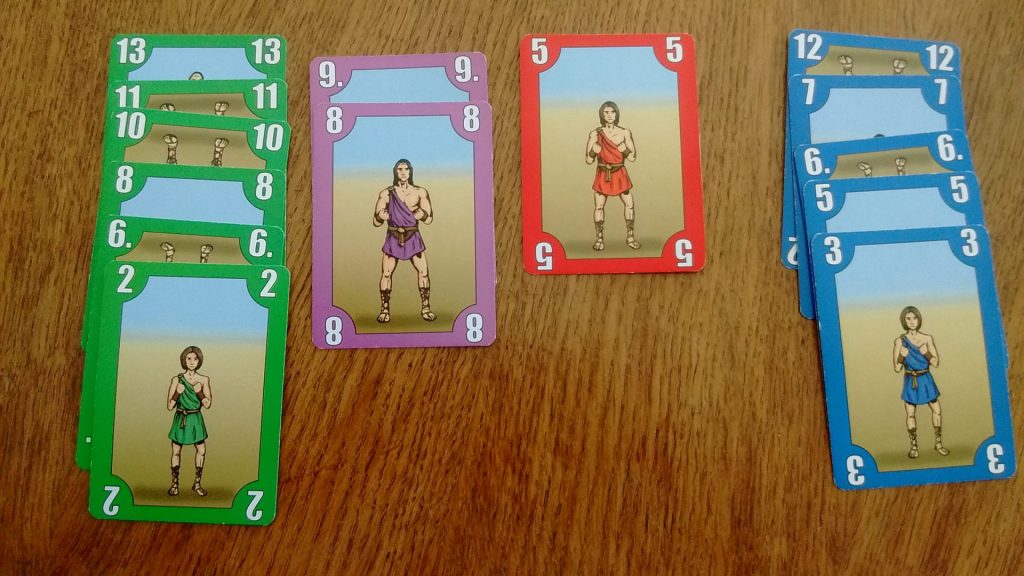 As the game progresses, tricks become more unpredictable with fewer people following lead suit. Playing a safe, middling card avoids collecting an unwanted trick, but what if you’re second to play? Can you toss a card between David and Goliath to force someone else’s suit to plummet in value? Make sure to collect some tricks, though, as zero cards means zero points. Once your proverbial bank gets broken, do you want to take every trick and squeeze every point out of a game? Or is it more satisfying to punish someone else by overfilling their suit?

It’s small, it’s simple, and it plays quickly. The number of rounds is equal to the number of players, and – like hearts – there is potential to pick on the leader and provide a catch up mechanic.

David & Goliath’s theme is thin and the artwork doesn’t do it any favors, but it’s no worse on the eyes than a deck of poker cards. As for the tagline, size matters most. Suit and play order are factors, but if you don’t play your numbers (size) right, you’ll end up just another Israelite collected by the big Philistine. (It’s also possible whoever designed the box wasn’t aware how the game worked, because the front cover says it’s for ages 10 and up, whereas the back of the box says 8 and up. Details, huh?)

With five or six players, it can sometimes feel chaotic when you get down to your last few cards. With three players, it’s nearly impossible to limit yourself to only two cards per suit. Whatever number of players, it provides a substantial, enjoyable filler. Find yourself a copy and get to slinging some cards!

If light card games are your type of thing, consider No Thanks, Team Play, 6 Nimmt, or PUSH.