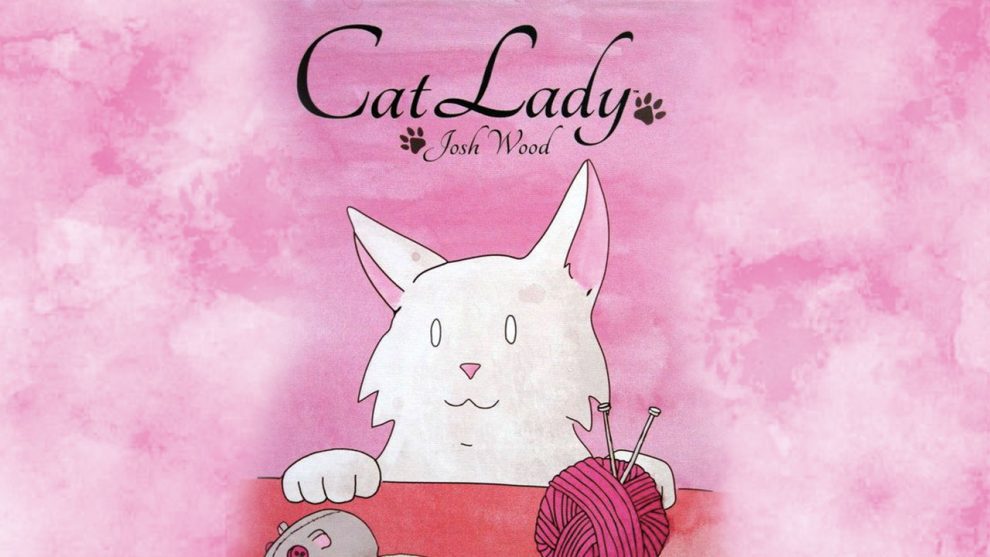 Bob Pazehoski, Jr. @bobpazjr
Add Comment
Four years after release, AEG’s Cat Lady universe is expanding. But what about the original? Join Bob as he jumps into allergenic waters to review all the feline fun!!

I still remember the New Year’s Eve when I discovered the severity of my allergy to cats. I don’t exactly like cats. I’ve always been something of a dog lover, so the allergy didn’t ruin my life. But it does mean that I now travel with Benadryl caplets, just in case a home is guarded by feisty felines. This confession might also mean that I’ve alienated half—or all—of my audience without even mentioning the game at hand.

Not even the vile substance known as dander, however, can halt the pursuit of worthy games. It falls into the same category as an allergy to box sleeves, poorly written rule books, and set collection games without included scorepads. Every industry has hazards that must be patiently endured.

Cat Lady was designed and illustrated by Josh Wood (Santa Monica) and released by AEG in 2017 to plenty of praise. It has spawned two small expansions and is now set to stand against it’s domesticated companion release this year, Dog Lover. Though I’m a little late to the purr party, it’s time to look back at the Ladies. 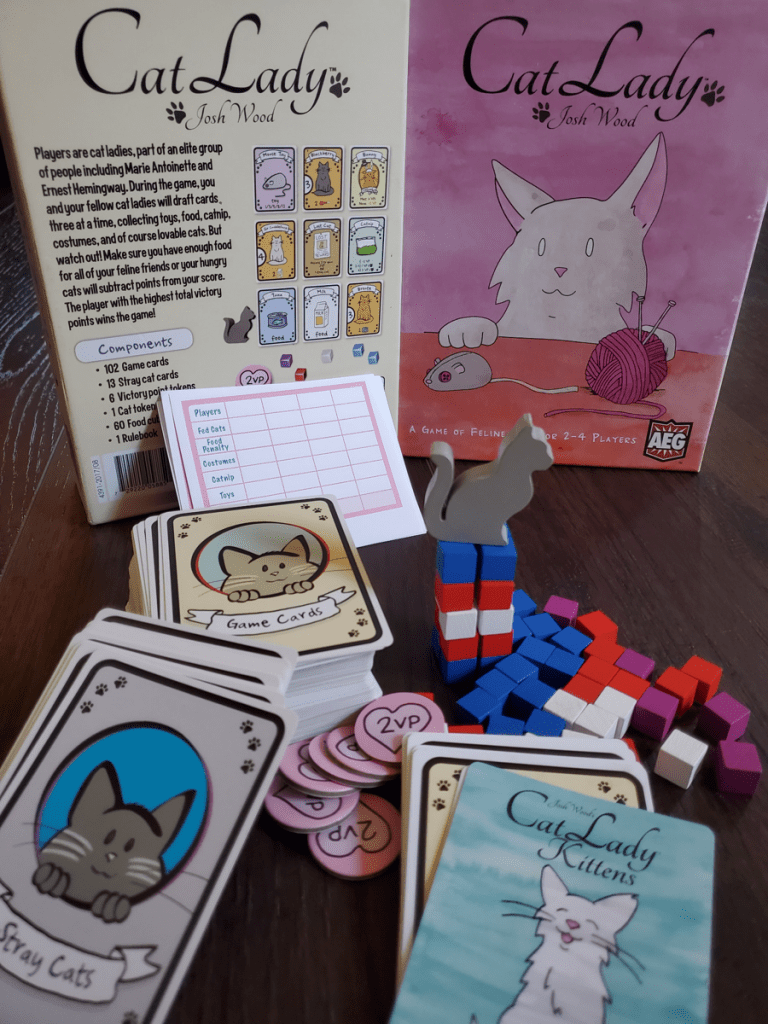 Cat Lady is a card-drafting set collection game. Drafting games come in all shapes and sizes. The method of choosing and refusing cards can vary, but there seems to be a sweet spot where mechanism matches the speed and objectives of the game. In Cat Lady, players draft on each turn by selecting either a row or column of cards from a 3×3 face-up grid.

After each selection of cards, the guard cat is moved to watch over the row or column that was just removed, preventing the next player from taking the same set. This keeps the grid from getting stale. However, Spray Bottle cards may be spent to torment the guard cat into allowing you to disregard its hissy intimidation. 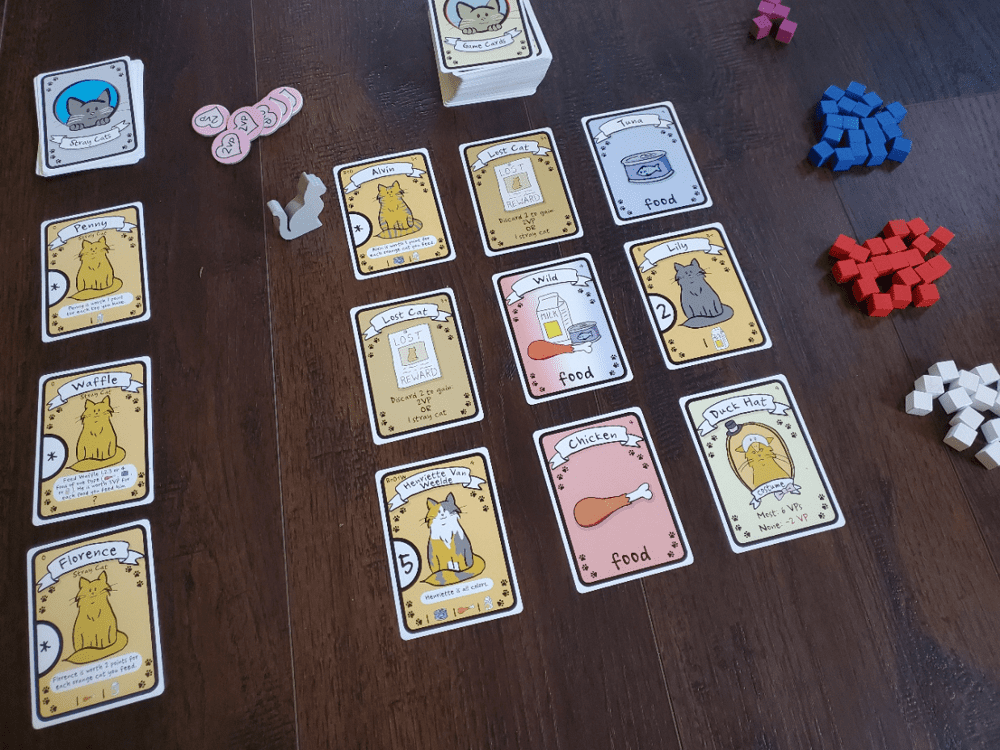 The key to success is feeding cats. Food cards are immediately discarded in exchange for representative cubes, which are not officially assigned to a cat until the end of the game. Cat cards are laid down into a tableau as part of the player’s clowder (a term for a group of cats that are familiar with one another… not really a term from the game, but Google hath enlightened me) and must be fed at the game’s end to avoid a penalty.

The rest of the cards are then held in hand. Toys are collected and scored for the sake of variety, because what cat wants to kick around seven balls of yarn when there are scratching posts, towers, and feather wands? Costumes are collected to dress up the felines against their will, presumably for exploitation on social media. The player with the most costumes receives a chunky bonus, while the player with none is penalized. Catnip is a penalty unless two or more are harvested, causing happy cats to grant affection in the form of bonuses. Lost Cat Posters can be traded for lucrative Stray Cats or Point tokens. 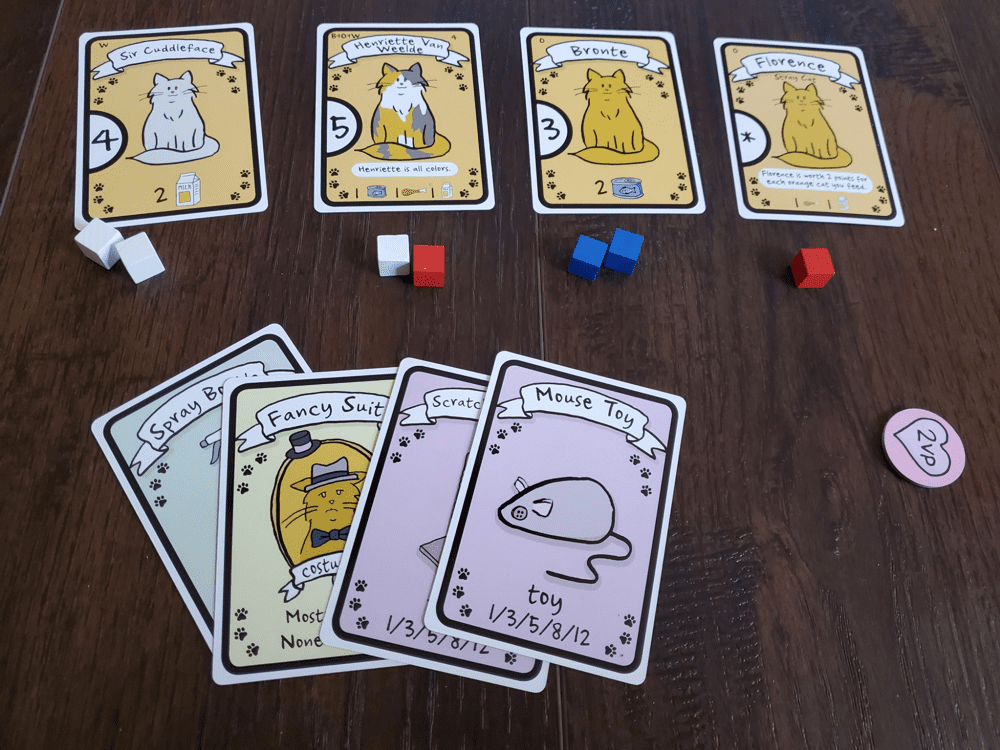 The game ends when the deck is exhausted, plain and simple. Penalties are dished out for each cat that isn’t completely fed, and for the player who wasted the most food. Tally up the points and play again, because honestly you can knock this one out in 15-20 minutes even at the max player count.

Cat Lady is the epitome of simplicity. Even if you have never seen a drafting or set collection game before, you could be playing this one after a few minutes with the rule book or a swift rules video. Depending on the group around the table, simplicity can be a great gift.

The cards are not the greatest quality, but they fit the game perfectly. Josh Wood’s comic-style drawings are minimalistic and cute. Two particular aesthetic qualities keep me smiling. First, the cat names are great. The kiddos latch onto favorites, and they pursue those favorites. Plus, Chairman Meow? Pablo Picatso? I can get behind cleverly placed puns. In fact, I wish more of the cats boasted ridiculous names. Second, I gaze with glee at the miserable frown adorning every single Costume card. This might be the game’s most bold societal statement. 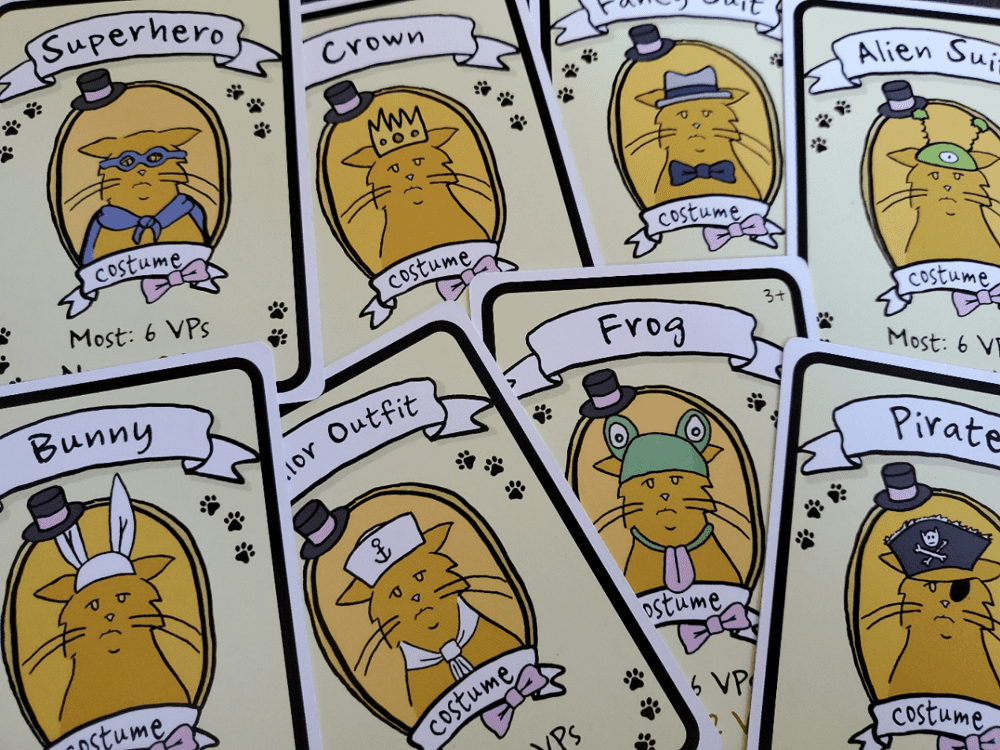 As for the negatives—why, oh why is there no scoring pad for this game? I’m not asking you, reader, I’m asking AEG. I don’t care if I chronicled years-long games of Rummy on plain old pieces of notebook paper as a teenager, I’m long since spoiled by now. I want to struggle and sweat trying to maximize every column on every little page of a delightfully themed Cat Lady scorepad! Thankfully there are templates online, but come on…

If you read my review of Dog Lover, you will see more of this argument. But having played both games, I now notice a slight identity crisis in the theme. Cat Lady plays more like a hyper puppy that just found the open box of milkbones. If you blink, it’s over; the cards and cubes are scattered and your favorite slippers are missing. The vibes are positive and the decisions are snappy. It’s a quick game that almost never makes you pause to think. You relax most of the time, because most of the time you can get a little easy love from the grid.

Cat Lady sinks or swims with your opinion of the grid. I am a big fan of card drafting and, subsequently, set collection. I appreciate the creative ways designers employ the mechanism. I’ll also admit there are widespread similarities that might make the mechanisms seem redundant. The Cats don’t shatter the mold by any means, but I find the combination of the grid and the guard cat to be an interesting variation. 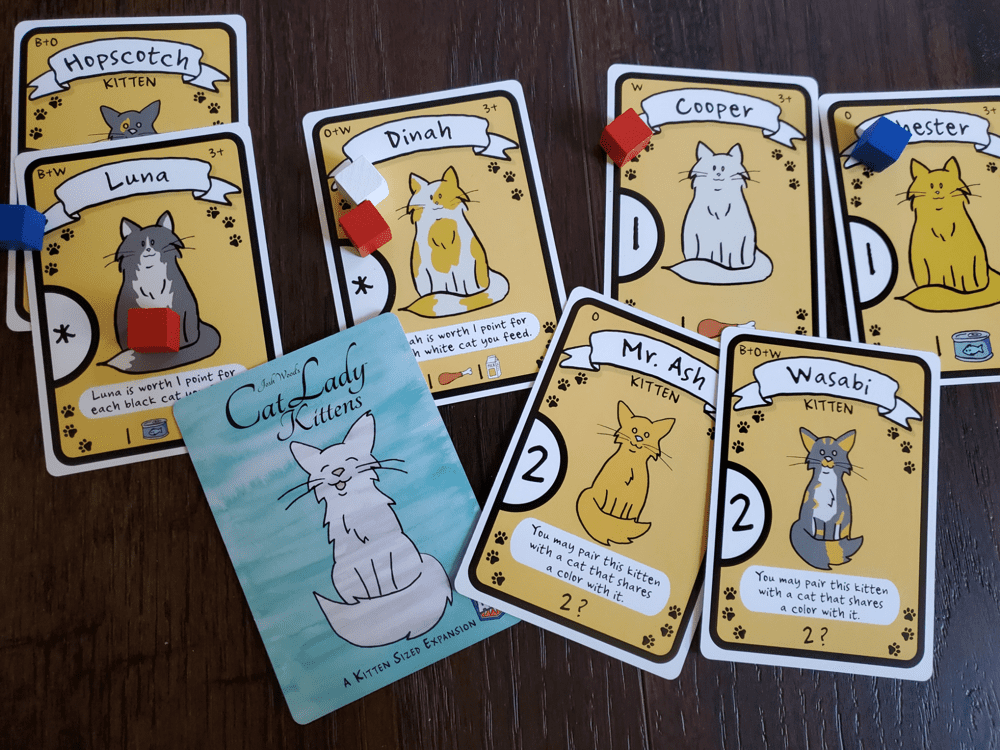 So far, I’ve also picked up the Kittens micro-expansion. It adds a handful of Kitten cards to the grid which play much like the Cats. They can be collected and fed as normal, or they can be tucked underneath a fed cat of a similar color, presumptuously forcing the adult to take care of it. The new blood boosts scoring and tactical variety. The scarcity also adds another hint of competition to the draft. Because this mechanic heavily foreshadows what’s to come with the Dogs, I can’t help but think the two games are helping one another along.

Cat Lady is a filler game if ever there was one. It is quick, easy, and fun for nearly all ages. It is a nifty little palate cleanser. The mechanics are familiar, friendly, and (mostly) feline. The base game is pleasant, the Kittens add personality, and let’s not forget the Box of Treats out there, promising to do the same.

The ultimate plus? Drawings of cats don’t require Benadryl. 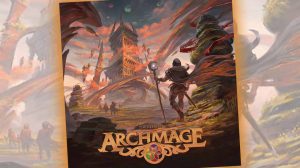 Bob’s love of a certain Rob Reiner classic invades this peek into Archmage from Starling Games. 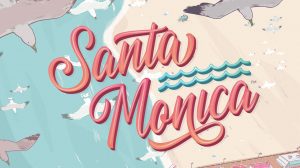 There are too many opinions about Santa Monica to limit the review to just one. Bob and Justin don’t see eye to eye on this one. Find out why! 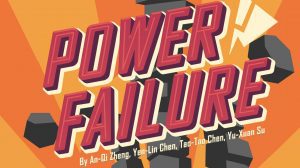 Nondescript cities need electricity, and you’re just the one to provide the solution. But does Power Failure avoid the pitfalls of its own name? Read our... 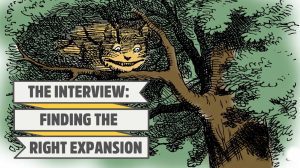 The Interview: Finding the Right Expansion

Building the right expansion must be challenging. Join Bob for an overblown metaphor as he considers the process from a slightly off-balance perspective.