David McMillan @FeldFreak
Add Comment
In First Take Fridays we offer hot takes on games that are new to us. This week we have Fool!, Tyrants of the Underdark, Free Ride, Kinoko, and Knight Fall.

Friedemann Friese’s trick-taking card game where your goal is to play all the cards in your hand. In a round, one player plays a card, thus naming the suit for that round. The player who plays the lowest card in that suit—or, if someone doesn’t have that suit in their hand, the lowest card in another suit—is the Fool. They get a green chip and cannot play a card in the next round. At the end of the game, your score is based on the face value of the cards in your hand. The lowest score wins.

A good filler for 4+ people, this plays quickly and was more fun than I thought it would be. 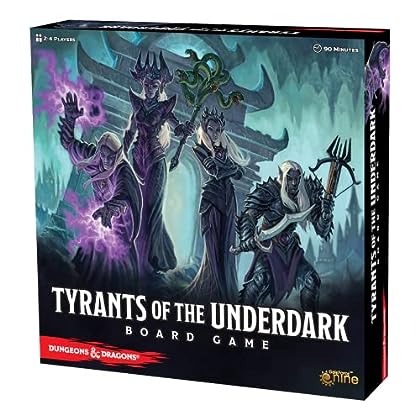 Tyrants of the Underdark – Andrew Lynch

Tyrants of the Underdark combines deck-building and area control, one of my favorite mechanical combinations. It always makes for a heavily tactical brew with gentle overtones of longer-term strategy. Despite the terrible title, the terrible art, the terrible graphic design, and the altogether non-existent theme, this is a terrific game??? Like my beloved Ethnos, this forgotten 2016 title deserves a reskin and another shot at life. 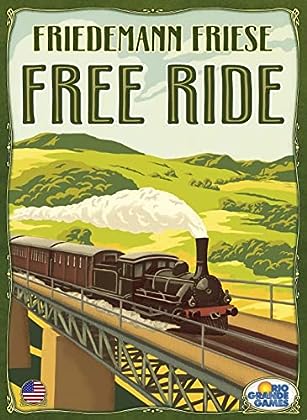 I’ve been on a FF kick lately and decided to pick up Free Ride on the strength of my enjoyment of Power Grid, Copycat, and Faiyum. Players get to select their start and end destinations from a grid of cards. Pick either the 1st and 2nd cards in a column or the 2nd and 3rd cards, then start working your way back and forth across the continent. On your turn you can lay track (which you own), you can move your train from your start city towards your destination, or you can grab new track pieces. If you use tracks owned by another player you must pay them, but that track then becomes “state-owned” and free to use by any player for the remainder of the game.

I played Free Ride with my 9yo son and we quite enjoyed it. Route selection is difficult primarily because of my lack of familiarity with European geography (as well as the game’s use of native spelling of cities rather than the Americanized spellings). Additionally scoring was tricky because you get a different amount of points for cities whether you’ve visited them once, or twice. I wouldn’t suggest this one with 2 players, I suspect that 3-4 is the sweet spot. 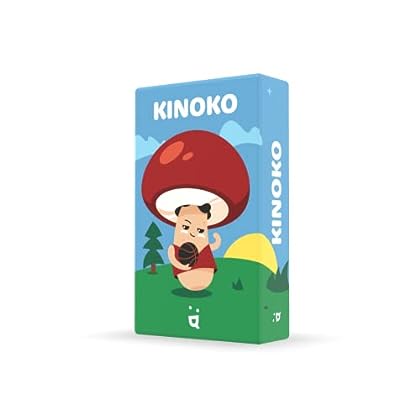 There are small box games and there are small box games. The tiny Kinoko from Helvetiq is reminiscent of the now-classic Hanabi in that players hold a hand of three playful mushroom cards outward, visible only to the rest of the table. The card numbers are visible on the back, but the object of the game is to be the first (and hopefully the only) to create a set of 1-2-3 in a particular color. Where Kinoko ups the ante is in adding a memory element. There are always two hands of cards face-down in the center of the table that are also available during play. The game involves swapping cards, most often one per turn, to create the desired set somewhere on the table. Available actions (and the occasional hint of frustration) arrive by way of three dice, with a turn consisting of choosing one. Along the way, players try to avoid penalties from holding cards of the forbidden color.

I am terrible at memory games, so this one is a personal challenge, but we’ve had fun with it so far. There are two distinct experiences: the light frolic with the young kiddos and the more swift and intense battle between the more capable older kiddos and adults. The mechanisms are quite simple, but there might just be enough in this wee box to prove a winner.

Knight Fall is a ‘dudes on a map’ game, played in teams, about demons trying to eliminate NPCs while the titular knights are working to eliminate the threat imposed by the demons. Each knight eliminated earns the demons a point, each NPC eliminated, two points. The knights gain points by eliminating demons and by simply surviving from one round to the next. The first team to reach a certain number of points wins the game.

A player’s turn is governed by the three cards they’ve drawn from the deck belonging to their faction and the cards are all multi-functional. Each can be used for its unique ability, for the icons it provides, or discarded to perform a generic action such as move, heal up, or punch someone. Through clever positioning and card combos, the players will try to achieve their goals. Table talk is encouraged, but the players have to be wary because for every turn of their faction, the other faction gets to take a turn. So, while it’s possible to set your team up for a slam dunk, there’s always the possibility that telegraphing your plans will result in your attempts getting blocked.

I didn’t initially think I’d enjoy this game. I am generally not a fan of games in this genre. In your face aggression? No thanks. So, I was surprised when I found myself actually having a decent time. Maybe it was the people I was playing with. Maybe it was the fact that I got really lucky with my card synergy. Maybe it was because my team won. Whatever the reason, I had fun. I doubt I’ll ever play Knight Fall again, but it was still a good experience.

Top 6 Catan Strategies for Turning Your Losing Streak Around