Let’s put it right out there. When you first read about a Bob Ross game, you thought it was probably going to be terrible, right? Licensed IP (intellectual property) games have a history of being bad…and sometimes they can be straight up disasters. In this review I’d like to show you that not only is Bob Ross Art of Chill a quality board game, but it could be one of the best gateway games you can have in your collection!

Who is this Bob Ross Guy?

Unless you’ve been living in a cave for the past 30 years you’ve probably heard of the highly regarded public access show The Joy of Painting, and its hirsute, soft-spoken star Bob Ross. If nothing else, you’ll probably recognize his signature afro, which he kept through the entire run of of the series.

When Bob first started his painting career he didn’t have much cash, so he permed his hair and let it grow to save money on haircuts. He eventually grew to dislike his afro but decided to leave it because of his brand. He even wore a wig when he was treated for cancer 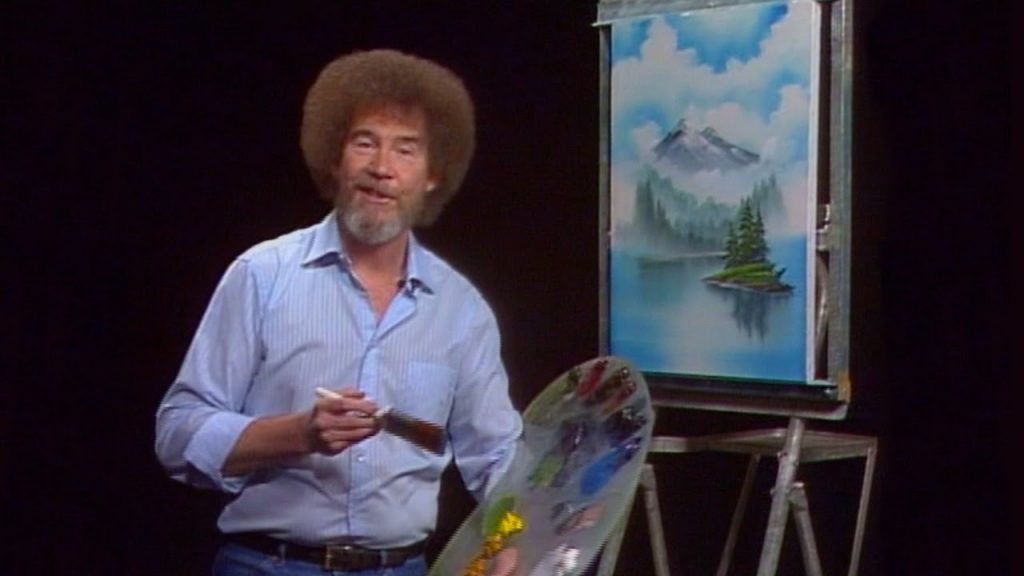 His goal with the show was to prove that anyone could learn to paint with just a few simple supplies and a few techniques which he happily taught to viewers over the 31 seasons the show was on the air.

“All you need to paint is a few tools, a little instruction, and a vision in your mind.”

Bob was a 20 year veteran of the United States Air Force and spent a number of years stationed in Alaska. This is where he developed an appreciation for the beautiful landscapes, as well as the “wet on wet” technique that helped him rapidly recreate those landscapes on canvas.

In Bob Ross The Art of Chill players compete against each other, and against Bob, in a race to gain the most chill points. These chill points are awarded for painting features, being the first to complete said features, and for using certain techniques. Throughout the game, players will be picking up and using Art Supply cards, acquiring Technique cards, and painting features on the current painting. 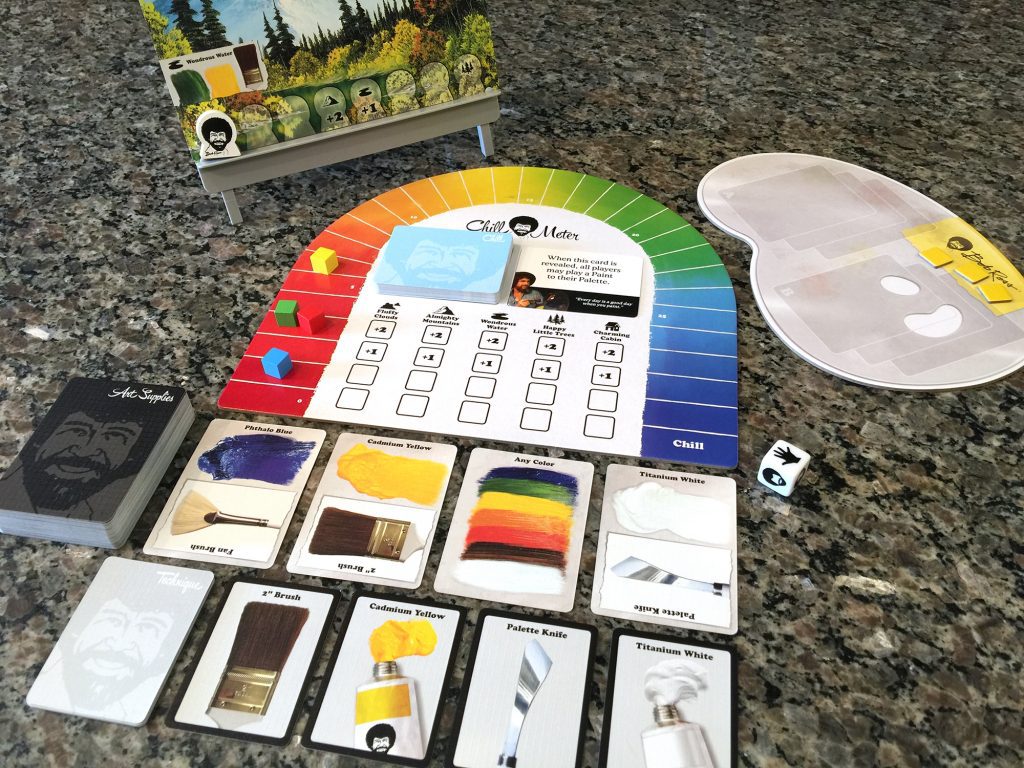 Just like The Joy of Painting gave you an overview of painting, then talked about some specifics, we’re going to get an overview of the game, then talk about some of the finer points. Bob Ross Art of Chill is played over a variable number of turns; basically however long it takes for someone to reach 50 chill points. Generally this takes about 30-45 minutes.

Players will start each turn by rolling the “Bob” die which provides valuable bonus actions, but also serves to advance the Bob marker located at the bottom of each painting. If Bob moves through the painting too fast, players won’t have time to complete features before the next painting is started.

Bob claims to have completed nearly 30,000 paintings throughout his life. None of them were sold, and most of them were donated to various PBS stations around the country which auctioned them off in fundraisers. 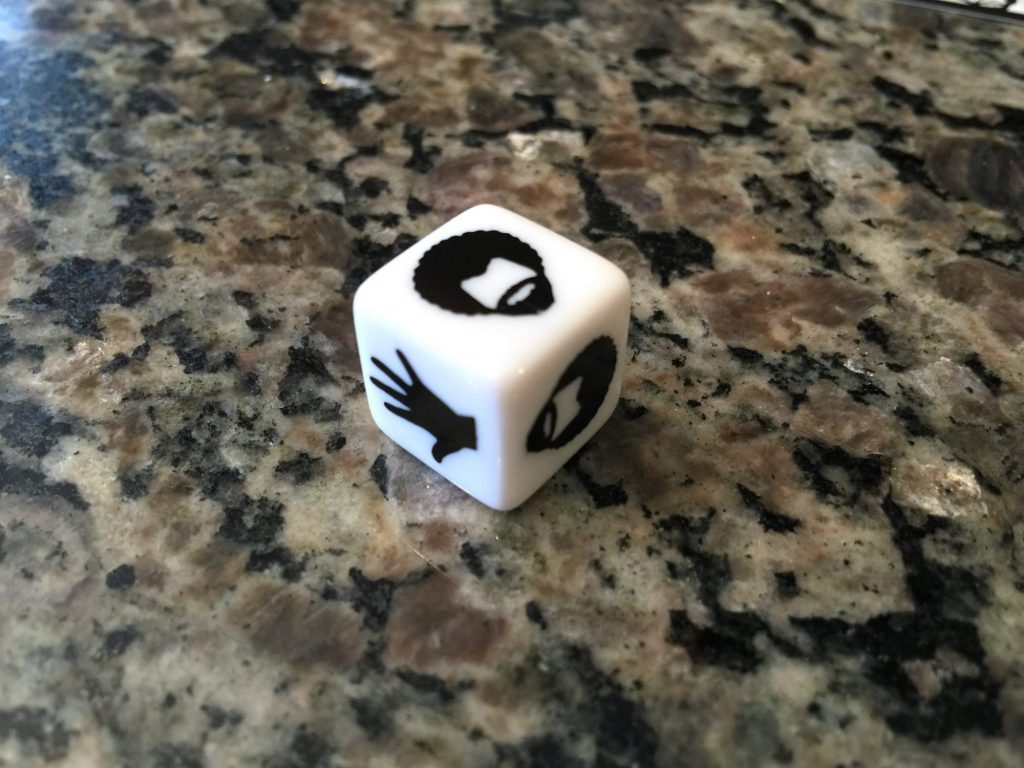 The Bob die has his face on 3 sides, and bonus actions on the other three, each of which provide the player some special ability. Even though “Rolling a Bob” moves Bob forward on the painting track it also gives every player a bonus in the form of chill cards. These chill cards can reward players for using a specific color on their turn, painting a specific feature, or just allow them to draw extra cards. Don’t get used to them though because you’ll draw a new one every time you roll a Bob. 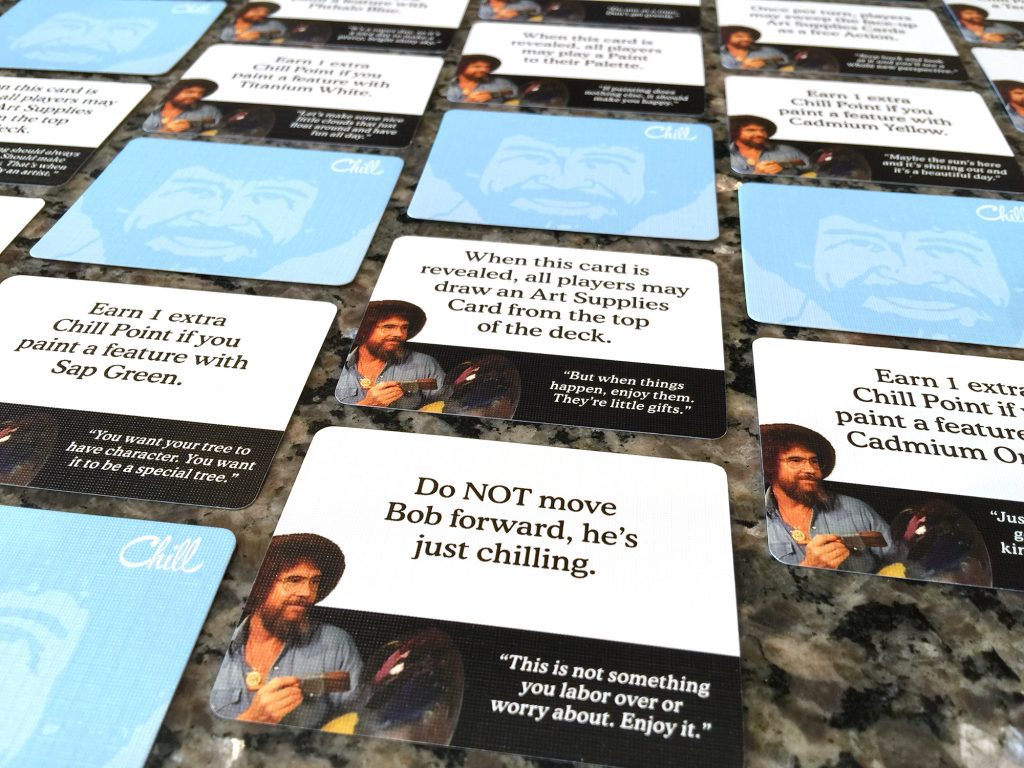 After you roll the die, you’ll get 3 actions with six different ways to spend them:

Art Supply cards are double ended (with the exception of the wild card) and can be used as either paint, or a brush (and yes, in Bob’s world a palette knife is considered a “brush”). The Art Supply cards are used to put paint onto canvas, to paint a feature in the current painting, or allow you to trade in for Technique cards which boost your score.

After painting a feature you’ll remove those cards from your palette and add the number of paints used, bonuses from any applicable technique cards, and bonuses for painting features before other players. If Bob reaches the end of the painting track, or if one player completes all three features on the painting, a new painting is revealed, and the Bob marker is reset.

Continue the game until one player reaches the end of the Chill track at which point the game ends immediately. 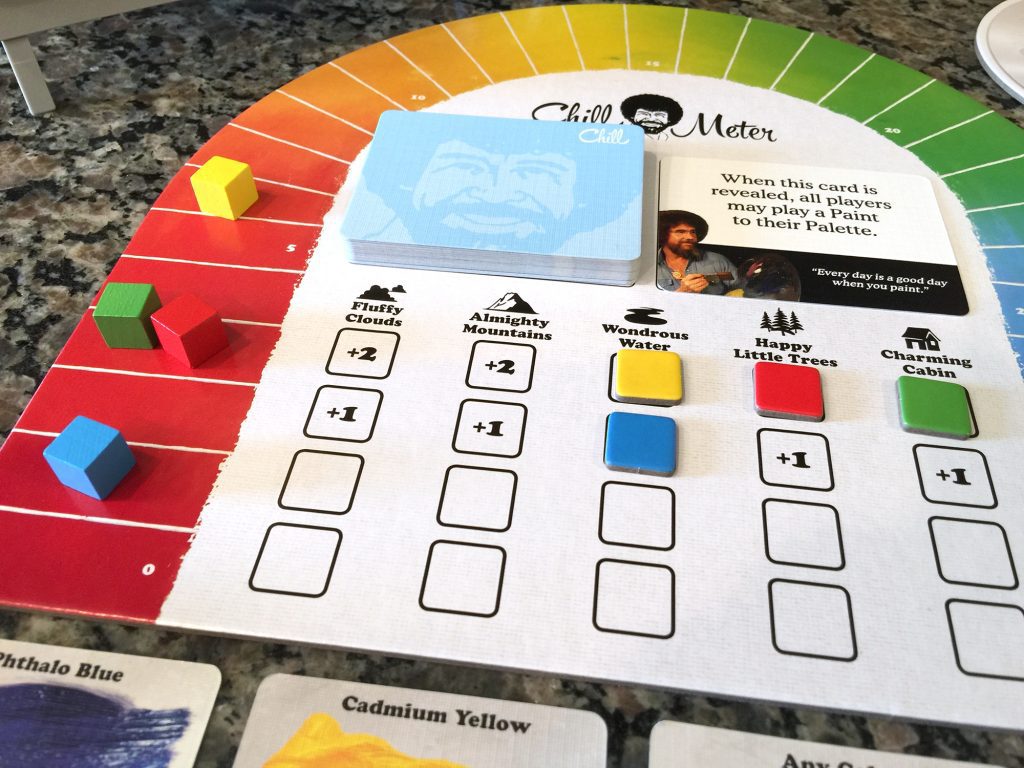 Does Art of Chill Make Your Your Little Trees Happy?

I’ve enjoyed this game every time I’ve played it. It’s great at 3 and 4 players, but I haven’t tried it with 2. Because of the randomness of the die and cards the game was never quite the same twice. In one game we zoomed through lots of paintings before the end of the game, while in another game we only made it through a handful.

The components in this game are great…they’re all sturdy and durable. The artwork is wonderful, as you might expect; bright and vibrant. The art team for the game probably had a blast sifting through and deciding exactly which paintings to use in the game. 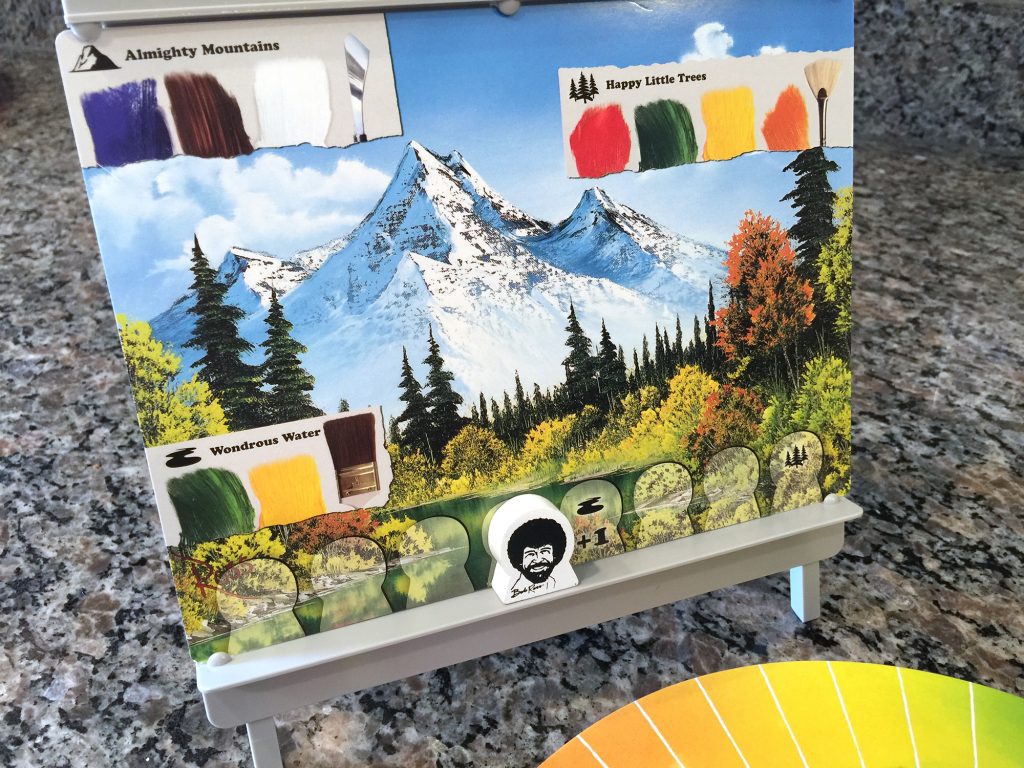 The gameplay has a few warts here and there…the die rolls for example. Because Bob might “finish” a painting quickly, players will have to constantly be monitoring the colors on their palette to make sure they still line up with the current painting. This can also lead to problems with the Art Supply cards; if you’re simply not getting the cards you need to complete a feature, you’ll fall behind. While in some games this isn’t a problem, there’s really no way to catch up to a player in the lead. In fact, because the game ends immediately when someone hits “maximum chill”, the first player has a distinct advantage.

Because this is a light game, none of these issues will cause real issues. Remember the name of the game is “The Art of Chill”. Grab a glass of Merlot, or a cold beer and have fun with your friends while you see who can do the best Bob impression. Bonus points to anyone who thinks their afro can match Bob’s!

This game will easily be a hit for fans of Bob Ross and The Joy of Painting. His influence can be found everywhere; from the color names, to the painting tools, to the quotes found on every chill card. In fact, every painting found in the game is an actual Bob Ross painting. But I was serious when I said this might be a great purchase for gamers and non-gamers alike. The theme, the subject matter, and even the mechanics of the game all scream “gateway game”. That means you could play it with your game group, or your family. Teach your grandmother and your eurogame loving friend.

Bob was known as a soft-spoken individual, but why? He is alleged to have been a drill sergeant while in the Air Force. He stated that “after yelling so much while in the military; he never wanted to yell at anyone again”.

It would be easy to dismiss Bob Ross The Art of Chill as a gimmick, but it’s certainly more than that. It’s a good game, and one that even Bob himself might enjoy. GIve this game a try and shoot for Maximum Chill. You might even reach it!