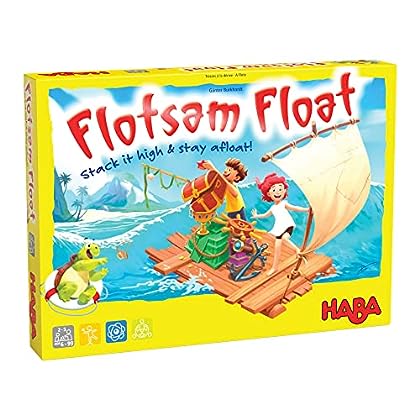 Skill is required in this game of island hopping. Flotsam Float contains 24 colorful stacking stones. This flotsam and jetsam must be collected and stacked on the wobbly raft. You need a steady hand because the fully loaded raft must be balanced to the next island.

In clockwise order, players pick a wooden piece and must stack it on one of the raft cards on top of the already existing found objects. In doing so, they must not move the other pieces. If no piece fell, that player may take an island card that has shells and a symbol on it. The symbol indicates which island the raft must be balanced to in the second phase. The islands are each four cards with a symbol on them, which are randomly distributed in the game area during the set-up. The raft card must be moved, but the found objects may not be touched. If again nothing has fallen down, this player gets the number of shells credited as points. The game is over as soon as only one island has island cards left. The player with the most shells wins.