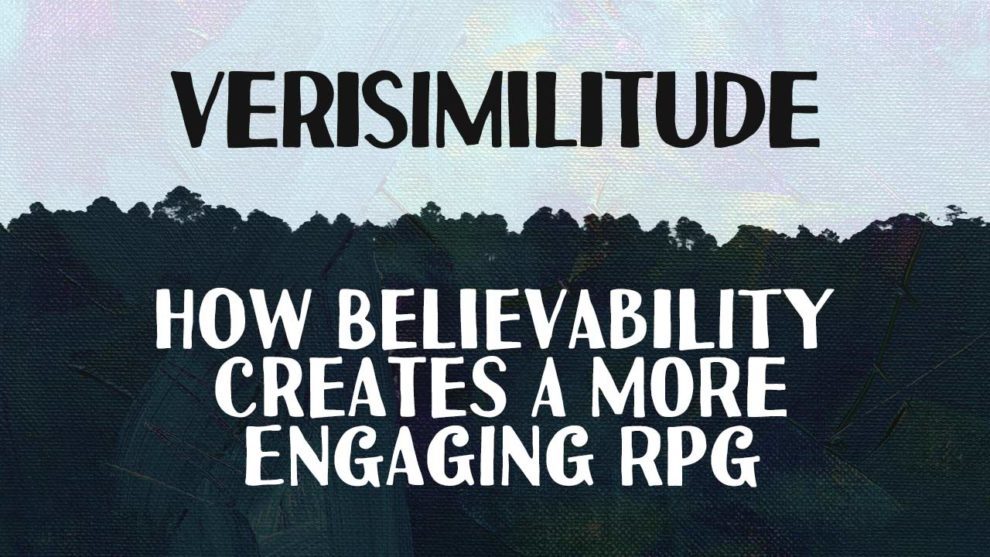 Ammar Al-Abdullah
Add Comment
Join Ammar as he dives into "verisimilitude" and examines how believability and realism can create a more engaging RPG setting.

A conversation that often gets bandied about in roleplaying circles—especially those that want to get a little better at running and writing compelling campaigns—is the concept of realism in roleplaying. The obvious conception is that realism should be kept as far from the roleplaying space as possible; we’re telling stories about vampire underworlds, apocalyptic magic, and cyberpunk futures, they’re obviously unrealistic. This is reductive. Believability is a major factor in all storytelling. It’s hard to engage with a story where things seem to happen on a whim without any rhyme or reason. Our brains seek patterns, and the crux of good storytelling is creating a world that, if not realistic, is at least internally consistent. In a word, what you’re looking for is a sense of verisimilitude in your writing.

Verisimilitude is a word with a bit of a nebulous definition, and I wouldn’t blame you for not being super familiar with the term. Merriam-Webster defines verisimilitude as “having the appearance of truth”. Essentially, something has verisimilitude if it appears to be realistic or depicting something real.

Acclaimed horror and science-fiction writer, Harlan Ellison once said, “I never strive for realism in what I write, but rather I insist on verisimilitude. I hope when you translate that, the important distinction can be made. I don’t need things to be true, I must have them seem to be true.”

In writing, this manifests through a world with consistent rules and structure; a world which emulates a person, place, or object by way of a sense of believability. The objective of a writer is not necessarily to depict something real or even realistic, but something believable.

So we have the basic definition of verisimilitude, how can we apply this to RPG writing? How can we improve our campaigns using this concept?

Well, it starts very simply with the rules of your world. Let’s take Dungeons an `d Dragons. The basic role of a Dungeon Master in D&D is to create a boundless world, and then give it texture through certain rules which make it feel genuine.

For example, say your players enter a city. They are confronted by all the usual trappings of urban life (a city guard, town criers, local peasantry, etc). In this city, they find a thieves guild. Think about what this implies about the city. It implies that the city is built in a way which has systemic inequality, and that there is an organization that hires and trains the citizens to be thieves, essentially taking advantage of this social dynamic. The only reason that someone might take up thieving as a profession is because they live in a society which necessitates that some people must steal to feed, clothe, and shelter themselves.

You can then branch out from there to explore the sense of inequality in the city that created the need for some to turn to crime to meet their basic needs. Maybe there are corrupt town officials who tax the lower class at an exorbitant rate, creating a greater and greater disparity between the rich and the poor. Maybe the city guard has a criminal element which shakes the citizenry down for protection money. Details like these make your setting more believable. They also expand on the established concepts you’ve set before the players in meaningful ways.

If your players should discover a thieves guild only to find out that there is no inequality in this city, that everyone’s needs are provided for and nobody has any reason to steal to live, the believability is gone, and the sense of player immersion is rightfully broken.

You can branch this out into any number of various examples. The takeaway is considering how certain aspects of your setting can be expanded upon in a way which breeds that believability in your players. If magic is an ability that can only be practiced by certain people in your setting, that means your setting has an inequitable element that might breed animosity between mages and non-mages. If your setting has a massive military empire who enacts imperialism across the world, this means that the clashing of steel has led to the crushing  and assimilation of other cultures.

This is a tough concept to wrap your head around as a new DM, and even seasoned writers can struggle with making their setting feel believable. But by interrogating elements of our settings in this deeper fashion, we can immerse our players in a more meaningful way.

Now, none of this means your campaign has to be grittily realistic to be fun. A point often made in the discussion of realism in RPGs is the idea that, in order for a campaign to be believable, it must emulate real life to the most minor detail. That, for example, medieval fantasy must be grim, and ostensibly full of meaningless pain and death. Or that you have to track things like hunger or thirst in order for your players to believe the campaign they’re playing. I don’t believe this to be the case.

Realism can contribute value to your campaign, but an over-emphasis on a sort of gritty, tough-as-nails reality can actually have the opposite effect. The most significant casualty is often the fun.

I have played in campaigns, and I’m sure some of you have as well, that were incredibly realistic, to the point where characters will die without any sense of pomp or circumstance. And while people often died in highly unsatisfying ways in real medieval scenarios, this can detract from the hero fantasy that I think is core to the experience of most roleplaying games. As someone who has been in campaigns where my character tried to engage in a bit of swashbuckling heroism only to be stabbed dead on the spot, that base level dedication to realism can suck a good deal of the fun out of the roleplaying experience. Was it realistic that my character hopped up on the tavern table, unsheathed his rapier, and got immediately cut down? Yes, that was highly realistic. Would I say it was a satisfying roleplaying experience? Not in the slightest.

There is a balance to be struck, and obviously this varies highly from group to group. You should definitely have believability in your campaigns, and you could have hyper realism in your campaign if it suits your group.

Taking all of this into consideration, verisimilitude and realism are two of many useful tools in a Dungeon Master’s arsenal. By just thinking back to some of your favorite stories, the elements in which they seem real, and even considering some of the elements of the real world in your life outside the table, you will have a lot more fun running games. I guarantee that your players will have a lot more fun playing in them. If they can believe your world, in whatever form that takes (be it gritty realism or just a highly believable setting) they will roleplay so much better. They will approach your game with the same care and love with which they approach their real life.

If you’d like to learn more about improving your game, there is much more to explore about becoming a better DM! If you’d like to learn a bit more about campaign writing check out these three articles about maps for your campaign, creating your own homebrew setting and creating compelling NPC’s, all by the fabulous KM Riley! You might also like this article about how something as simple as the fare at the local tavern can make your campaign more believable, by Kurt Refling!

That’s all I have for y’all today! Cheers until next time, all you jarls and lasses! 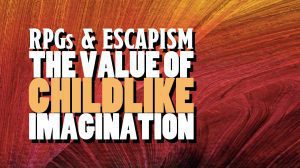 RPGs and Escapism (The Value of Childlike-Imagination)

RPGs can provide an excellent want to temporarily escape from the realities of every day life. With just a bit of imagination you can visit unseen worlds...

Just your less-than-average Zoomer who’s way too into his dice and miniatures. Doing my best to forge the highest adventures and the grandest stories.

I am partnered with Arcana Vault! If you'd like to support my work here, you can buy high-quality dice and other tools of the trade through the link on my author page!