David McMillan @FeldFreak
Add Comment
In First Take Fridays we offer hot takes on games that are new to us. This week we have Blood on the Clocktower, Black Sonata, Amerigo, Chocolate Factory, and Green Team Wins

Blood on the Clocktower – Justin Bell

My friend John wanted to play games all day for his birthday, and the nightcap was the game everyone is talking about: Blood on the Clocktower (BotC). A hidden role and bluffing game in the vein of One Night Werewolf (a game I have never played), BotC features a gamemaster known as the Storyteller who doles out roles, facts, and drama as players race to find out who amongst them is the Demon before the Demon and its minions destroy the town of Ravenswood Bluff.

Like all games of this type, the night is highly dependent on players buying in, really getting into character, and laughing their collective behinds off when everyone finds out who was really who. We played two games and in one of them, I was “Good” but didn’t know that my facts were not really facts at all thanks to the role of one of the Minions, which are characters that support the Demon. In my second game, I was “Evil”, playing as a Minion until I was made the Demon by my Demon boss.

Is BotC fun? Sure. Should you play the game with at least 12-15 people (the game supports 20!)? Absolutely, because playing with only 7-8 players really hurts its chances for both the Evil players to win and for the group to have maximum fun. 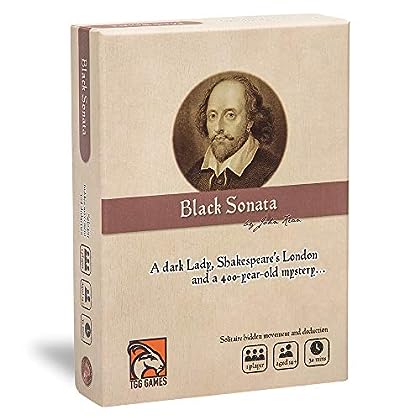 Black Sonata, which launched on Kickstarter back in 2017, is a deduction puzzle themed around the mysterious Dark Lady, famed subject of several Shakespeare sonnets. The goal of the game is to walk around London, tracking the Dark Lady’s movements while gathering clues to identify her. This is almost entirely a game of deduction and pattern recognition. After one play, the game runs smoothly, com- and propelling you from one turn to the next. I’m not much of a solo gamer, but I dabble from time to time. Under Falling Skies was excellent, and Commanchería remains one of the more remarkable gaming experiences I’ve ever had. With its thirty minute play time, ease of play, and impressive setup variability, Black Sonata will certainly make it to the table again.

While this last weekend’s play was technically my second play of this game, my first play was over six years ago, so it was like I was playing it for the very first time. Having bought the game off of the flea market at GenCon 2017, it was a nice feeling to finally get my copy to the table.

Let’s just get it right out there: I really dig this game. Amerigo is one of Stefan Feld’s finest and I can totally understand why it gets all the love that it gets.

In Amerigo, the players are competing to discover and populate the various islands scattered about the board. Points are scored for every settlement tile that a player places, and points are also scored when an island is finally completely settled. The amount of points scored for this depends on whether or not a player has established a trading post on the completed island, how many trading posts they have, and also which game round the island was fully settled in.

There are a lot of other intricacies that I’m not going to touch on here: pirates, commodities, the different phases of a round, etc. Suffice to say, the game is just brilliant and I am a massive fan of the ‘cube tower’ which is used to dictate which actions are available over the course of each round. Stefan Feld is obviously a big fan of it, too, since he reused the idea for his upcoming game Marrakesh.

Keep an eye out for my upcoming reviews of both! 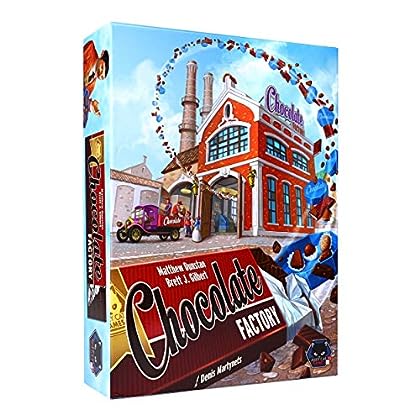 In Chocolate Factory from Matthew Dunstan and Brett Gilbert (The Guild of Merchant Explorers), players build a factory engine to turn cocoa beans into various high-end chocolate goodies to sell in various shops. For the game’s six days, beans enter the factory on one end, moving along on tiles to be transformed by factory parts. As the yummy bits leave the factory, they are sold either to small corner shops or larger department stores. Regardless of any hiccups we had with the rules, the game has a logical flow.

And wow is this one a tactile delight! I love physically pushing the beans into the machine, hitting them with upgrade after upgrade. In terms of gameplay, it’s a slow build engine. I really enjoyed the draft at the beginning of each day for employees and factory upgrades—timing and placement in the factory is crucial. The rest of the day is reaping what you’ve sown, moving chocolate, racking up sales and building influence until the avalanche of Pounds (monetary, that is) at the end. It made me feel like Wonka, without having to worry about teaching obnoxious children much-needed lessons.

A party game featuring Question Cards and dry erase pads. Everyone is asked the same question (fill in the blank, either/or, etc.) then writes their answers on their board, hidden from other players. You score points by guessing the answer the majority of the players guess. If you guess right, you score one point and your orange/green tile gets flipped to green. Now, a winning answer will score you two points. Guess wrong and you’re back to orange.

I’m not a big fan of party games, but with the right people, this worked pretty well.