In Yspahan, you’re attempting to build souks in the most prosperous neighborhoods to increase your wealth, use your influence with the Shah’s supervisor to control the marketplace and send your goods, and those of your opponents, to far off lands in caravans destined for the desert. But don’t delay, you only have three weeks before the markets close and the caravans begin their journey East.

Each player receives 2 gold coins, a building board in their color, and all the cubes of their color. Players will place one cube on the 0 space on the scoring track on the City board, then set aside 1 cube for use on the building board. Lastly the black first player marker is given to the starting player and the game can begin. 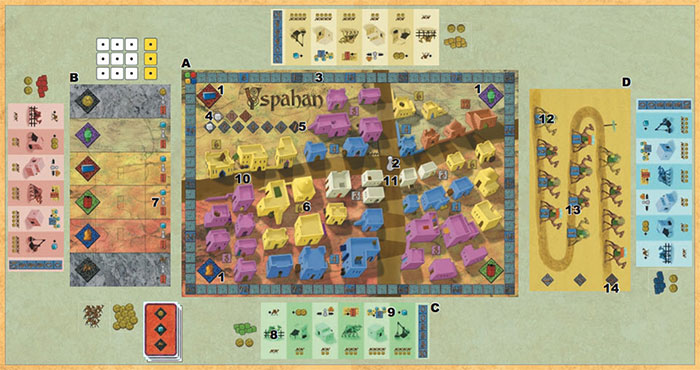 Rolling Dice and the Tower Board

On a player’s turn they will take all white dice and roll them. If the player desires more potential choices then the yellow dice may also be rolled at a cost of 1 gold coin per dice. Once the die have been rolled, group them by the face value and place them on the Tower board in the following manner: 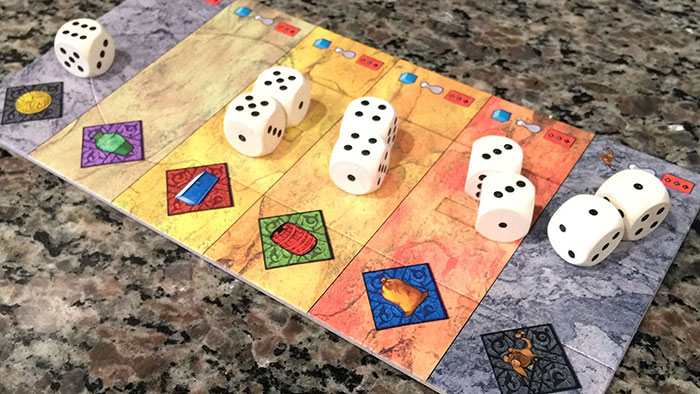 The Tower Board is central to the game and is what allows players to select their moves for that turn. The Tower Board is split into 6 sections, each with 3 possible choices. From top to bottom these sections are:

Each section has 1 unique action, and 2 common actions. For both the Camel and Gold sections, the player will take as many of that resource from the general stock as there are dice. For example 4 dice would equal 4 of that resource. For the Sack, Barrel, Chest, and Vase sections, the player is able to place as many cubes of their color as their are dice into shops in that neighborhood (more on that in a moment). Finally, for all 6 sections, a player can either draw a single card from the deck. or move the supervisor. On the off chance that there are no dice when it comes to a player’s turn, they will simply draw a card.

The Supervisor is moved down the road a number of spaces indicated by the value on the chosen group. Pick a group of 3s and you can move the Supervisor exactly 3 spaces in a straight line (or around a corner) in any direction. Players may choose to increase (or decrease) that number by paying a single gold per space. If the Supervisor completes their movement next to a space containing a cube from any player, that cube will be moved into the Caravan in the order indicated by the player moving the Supervisor.

If the player whose cube is being moved owns a camel, they may choose to discard a camel to preserve that cube’s position and move a cube from their supply to the Caravan instead. 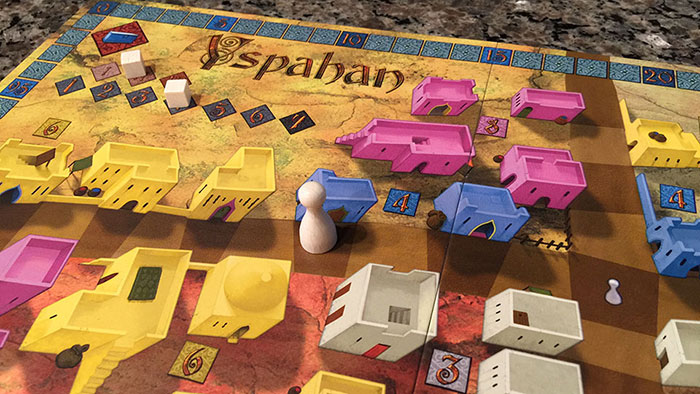 The Caravan is composed of 12 camels, divided in 3 groups of 4 camels each. When placing camels, the player must first place along the bottom row, then the middle row, and finally the top row. Each row will have a number of available spaces equal to the number of players, and each camel may hold only 1 cube. For example, in a 3 player game, only 3 spaces in each row are available to receive cubes. 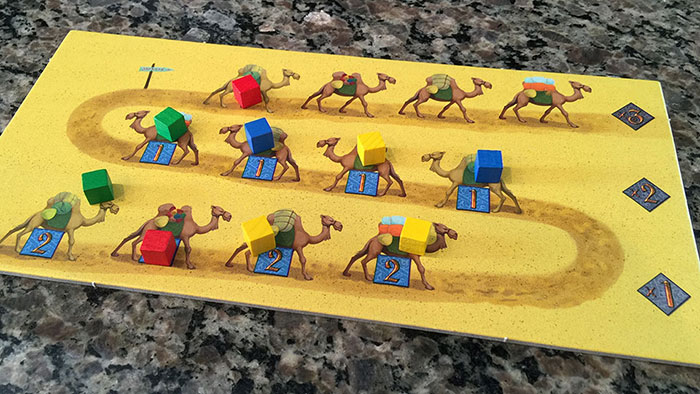 While taking a group of dice is mandatory, constructing a building is optional, and may only be done if the player is able to pay the resources shown under their desired building. Buildings grant a player special abilities for the remainder of the game. The buildings on the player board are from left to right:

Each time a player constructs a building the marker to the right of the board is moved downwards, immediately scoring the player that many points.

For each completed souk, in each neighborhood, players receive the points indicated on the colored square near that group. Players who have constructed The Bazaar receive an additional 2 points per completed souk. Once the points have been counted, the cubes are returned to the players. 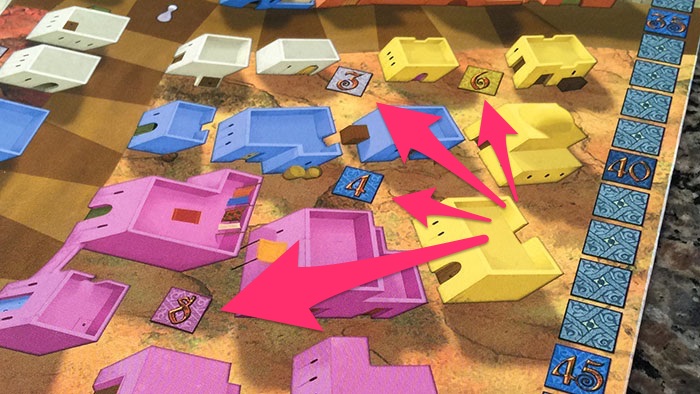 Scoring at the end of the 3rd week is identical to the scoring for weeks 1 and 2. The player with the most points is the winner.

Let me start off by saying that I love this game. Its fairly easy to teach, it’s vividly colored with a small footprint, it’s easy to play, and it has wooden camels!

Yspahan was one of the first games that I bought in my current race for “most board games on my street” rush. I watched a gameplay/review video of Yspahan and I was mesmerized. It had very little in common with any game I’d ever played. It had dice, but you didn’t use them to dictate movement. It had pieces, but they didn’t go on the board in a way I’d seen before. It let you build buildings, but you didn’t do anything with them…they just sat there and gave you cool “superpowers”.

Other games have come out since Yspahan was released that use similar mechanisms. Grand Austria Hotel and La Granja both let you pick your desired action from groups of dice. Jaipur uses camels as pseudo-currency. And while those games are great, Yspahan makes it simple, and easy to understand.

What I Dislike About Yspahan

While Yspahan does offer strategy, there’s only a few main ways to gain points. This doesn’t bother me, but there are some who like to craft a strategy to winning a game that is unique. Yspahan doesn’t really have that option.

There’s not really anything else that bothers me about Yspahan. It’s not perfect, but it is really fun, and plays faster than other similar games due to the single action you’ll take on your turn.

Yspahan is a lightweight Euro style game that’s fun and easy to play. Give it a chance, you won’t be disappointed.