There is a language, little known,
Lovers claim it as their own.
Its symbols smile upon the land,
Wrought by nature’s wondrous hand;
And in their silent beauty speak,
Of life and joy, to those who seek
For Love Divine and sunny hours
In the language of the flowers.
–The Language of Flowers, London, 1875

During the 19th century the “language of flowers” was not merely poetic license – it was a form of communication known as floriography. Friends and lovers sent flower bouquets to each other encrypted with secret messages. The secret messages were the flowers themselves.

Different flower types signified the sender’s emotions. Additional subtext was based upon flower color or the combination of flowers included in the arrangement. To the untrained eye a dozen roses were exactly that – but to those that were “fluent,” the flowers contained visual and colorful clues that deciphered one’s romantic feelings. Red roses were love or desire. White roses could mean innocence or thoughtfulness. A combination of the colors could mean liking someone as a friend, or “LIKE-liking” them. Best-selling flower dictionaries were published that deciphered this floral code.

Essentially this fad was the Victorian-era equivalent of emojis. Because one could hide messages in plain sight within a bouquet a suitor could be more playful, flirty, and daring. Sending flowers was a lover’s leap. And divining their true meaning was as thrilling as having the loveline on your palm read by a fortune teller.

The small bunches of flowers sent like mash notes to the beloved were known as nosegays, or “tussie-mussies.” In Elizabeth Hargrave’s new card game Tussie Mussie, this Victorian-era practice is recreated with charming aplomb and smart, quick, addictive gameplay.

How Does Your Garden Grow

Like the mini-bouquets upon which Tussie Mussie is based, the game itself is minimal. There are 18 total cards in the deck, each depicting a unique and beautifully illustrated flower type. 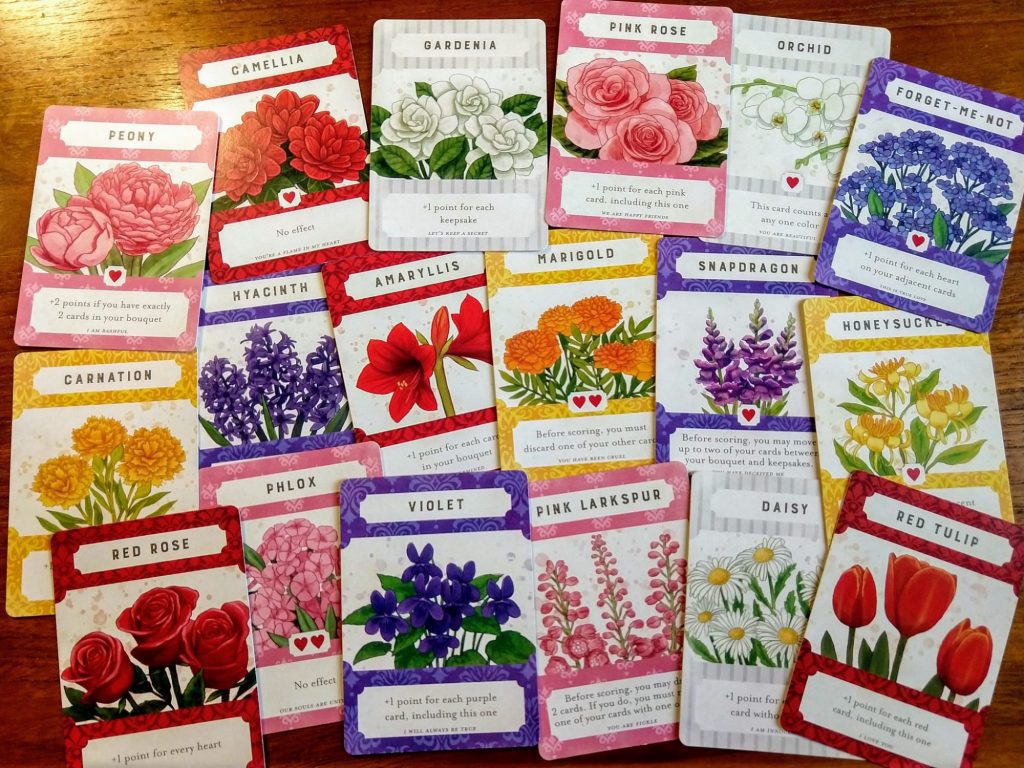 Tussie Mussie is played over three rounds with each round consisting of four turns. During a turn each player acquires one flower card which they will add to their tableau.

The core mechanic of Tussie Mussie can be best summarized as “I Split, You Choose.” (This rules explanation references the two-player game).

Player #1 draws two cards from the top of the deck and looks at them without showing Player #2. 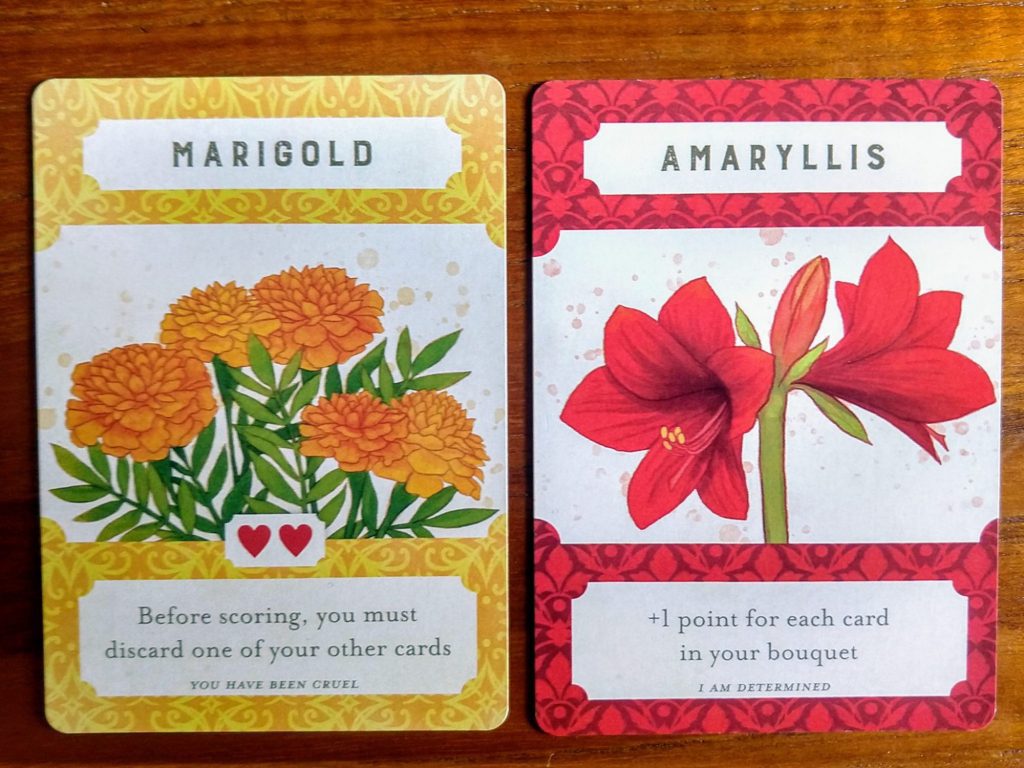 Player #1 then offers these two cards to Player #2 with one card face-up and the other card face-down on the table.

When offering the cards Player #1 decides which card will be visible and which card is hidden. 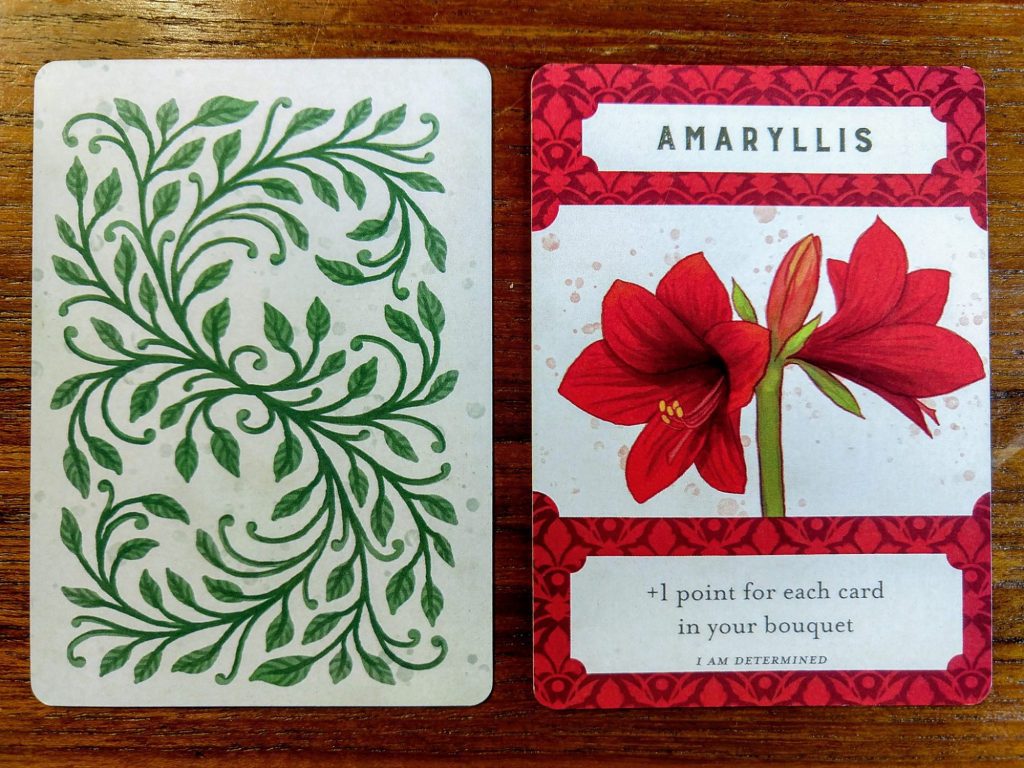 Player #2 may take either the face-up card (having perfect information) or the face-down card (unknown to them). The card that is not selected by Player #2 is automatically given to Player #1. Cards are added to each respective player’s tableau.

After four turns, each player will have four cards in their tableau, the round ends, and players score their “arrangement” of flower cards.

When forming tableaus each round, players place cards from left to right and must keep their cards’ original face-up or face-down state intact. Cards acquired face-up are considered Bouquet cards, and cards acquired face-down are considered Keepsake cards. Each card’s tableau position, adjacency to other cards, and Bouquet or Keepsake status are factors that determine the card’s point value. 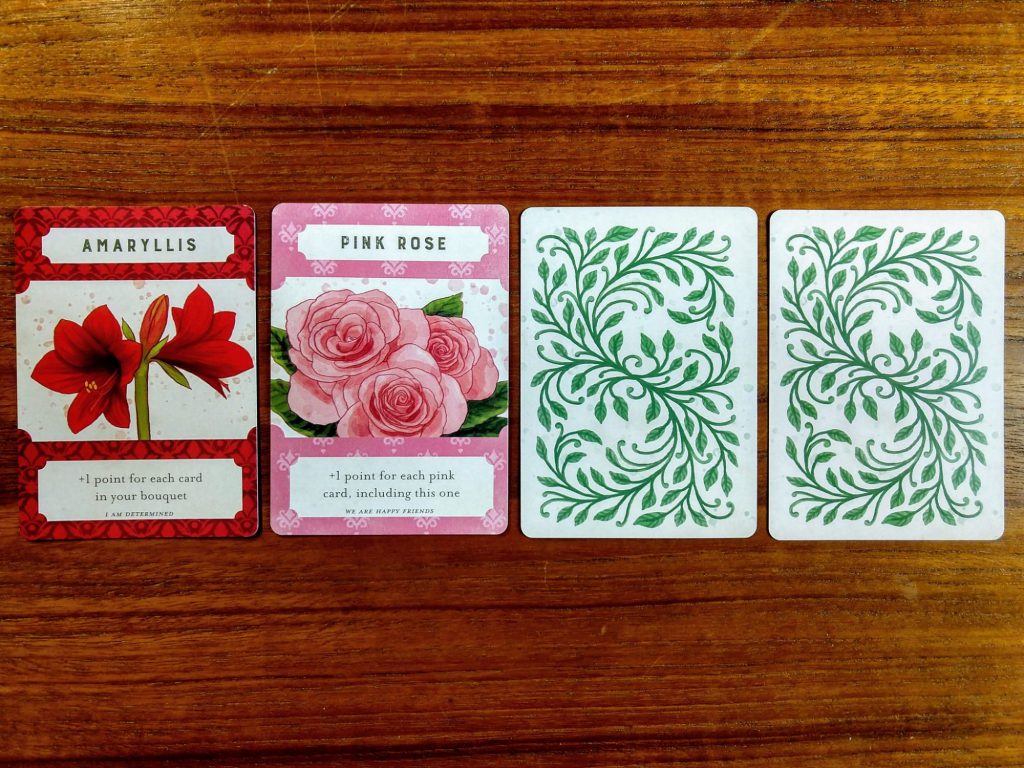 At the end of the round players reveal their face-down (Keepsake) cards. Players should slide any face-down/Keepsake cards slightly towards them so they remember which cards are considered Bouquet or Keepsake for scoring purposes: 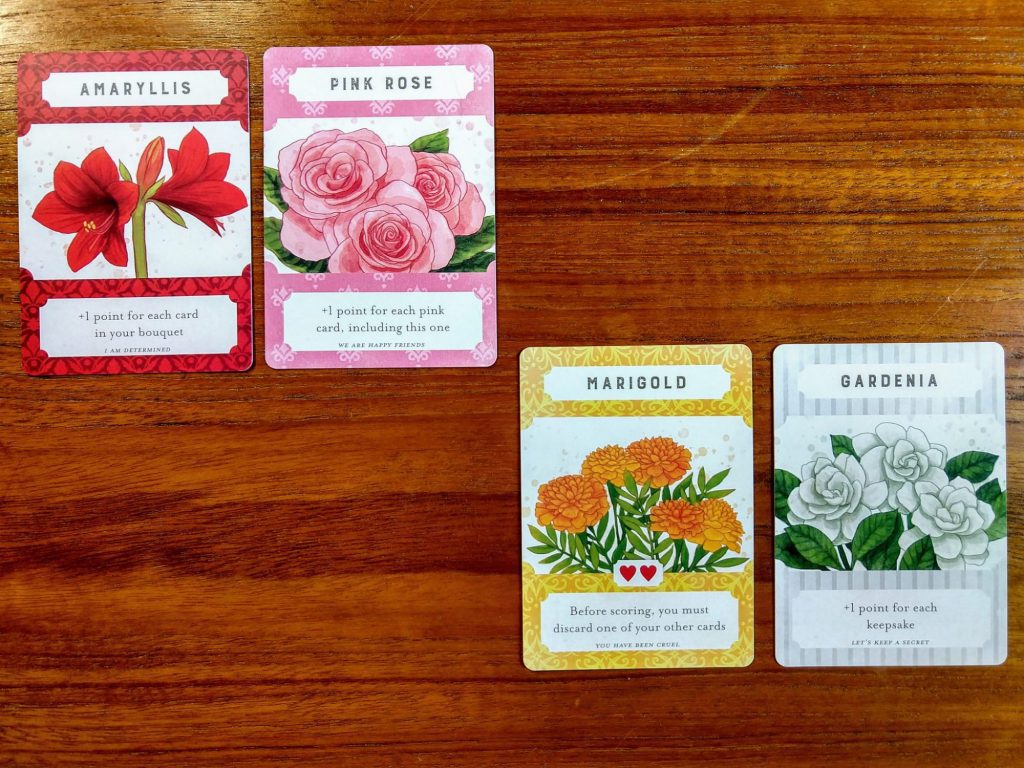 Cards with “Before Scoring” special actions must be resolved first. The Marigold card, for example, forces you to discard one of your other cards, while the Snapdragon allows you to change the Bouquet or Keepsake orientation for up to two cards in your tableau. 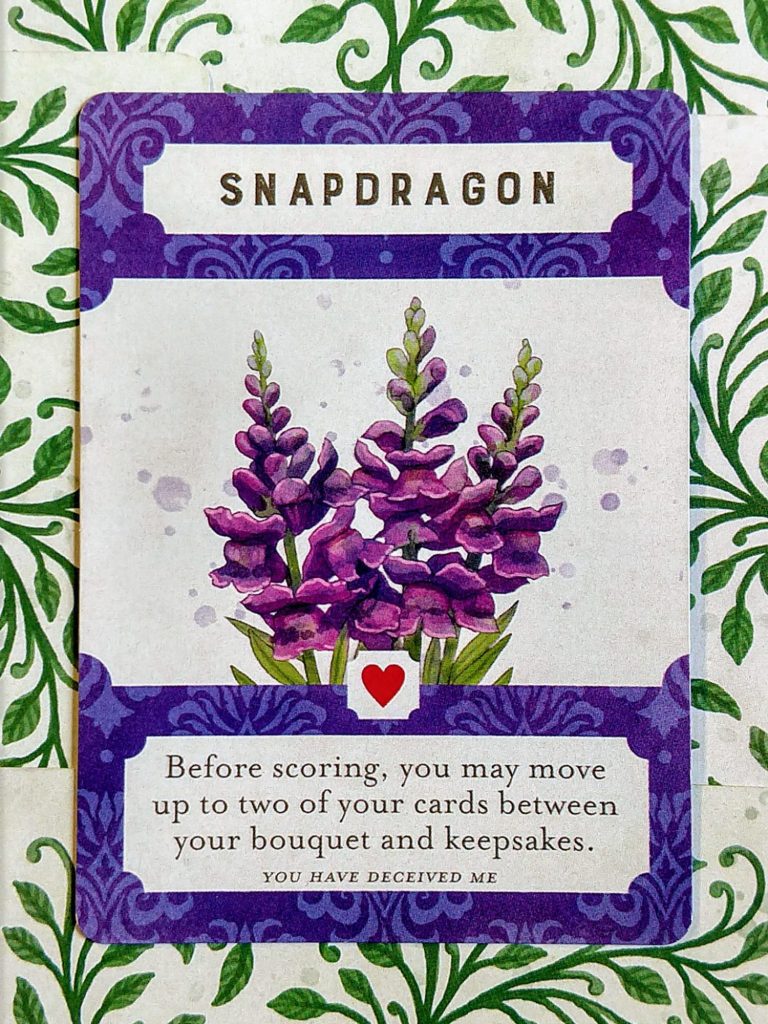 Next, cards with heart icons on them score 1 or 2 points. Some heart cards may also have additional scoring conditions while others have no effect other than awarding heart points. 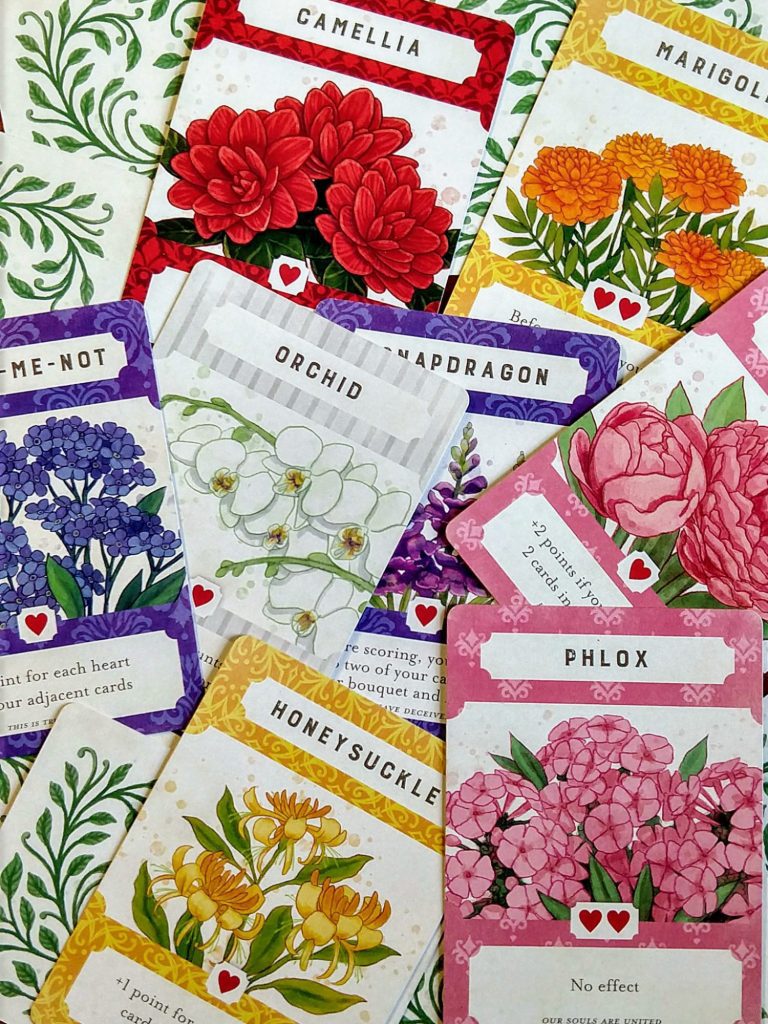 Finally, cards score based upon each card’s particular scoring conditions. These may pertain to a flower’s color or cards that have heart icons (or no heart icons). Some cards score depending on whether they are Bouquet or Keepsake, while others score if adjacent to specific card types in the tableau.

A flower card’s point tally can be variable. Acquiring more matching colors, more face-up or face-down cards, or more cards with hearts/no hearts in a given round may further modify a flower card’s score.

After three rounds the player with the highest overall score wins. In case of a tie the player who has the alphabetically lowest named flower card in the final round wins.

Tussie Mussie’s artwork and graphic presentation is as beautiful and elegant as a rosebed. The cards (wonderfully illustrated by Beth Sobel) are designed like seed packets and are riots of color framed like paintings. Form and function mesh perfectly on the cards; visual information is uniform and uncluttered, and effects are thorough, coherent and clear. In our games there was little ambiguity or argument with a card’s timing, effects, or interactions. (One card in our games that warranted discussion was the Pink Larkspur, but this was quickly clarified). 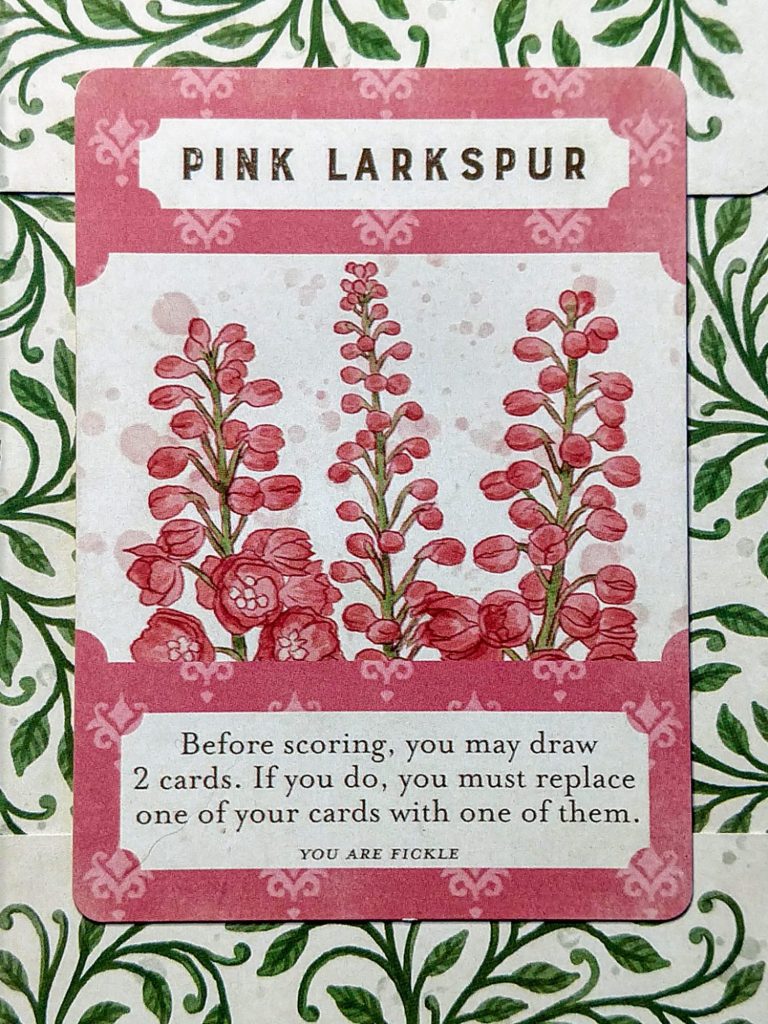 Players are given thoughtful tactical decisions each turn that allow for true strategy, but the game state is never overrun with the weeds of downtime or analysis paralysis. The game creates meaningful player interaction that doesn’t require brute force “take that” conflict.

With impeccable presentation and strong gameplay, Tussie Mussie succeeds as a terrific filler, but it is how the game conjures and inhabits its theme that elevates it to instant classic status.

In addition to scoring or special effects, each card includes a phrase corresponding to the flower’s meaning. The rules suggest that “for flavor” players should say these phrases out loud. There are simple declarations of love, stinging accusations and devastating rejections, and even last-gasp entreaties for a second chance: 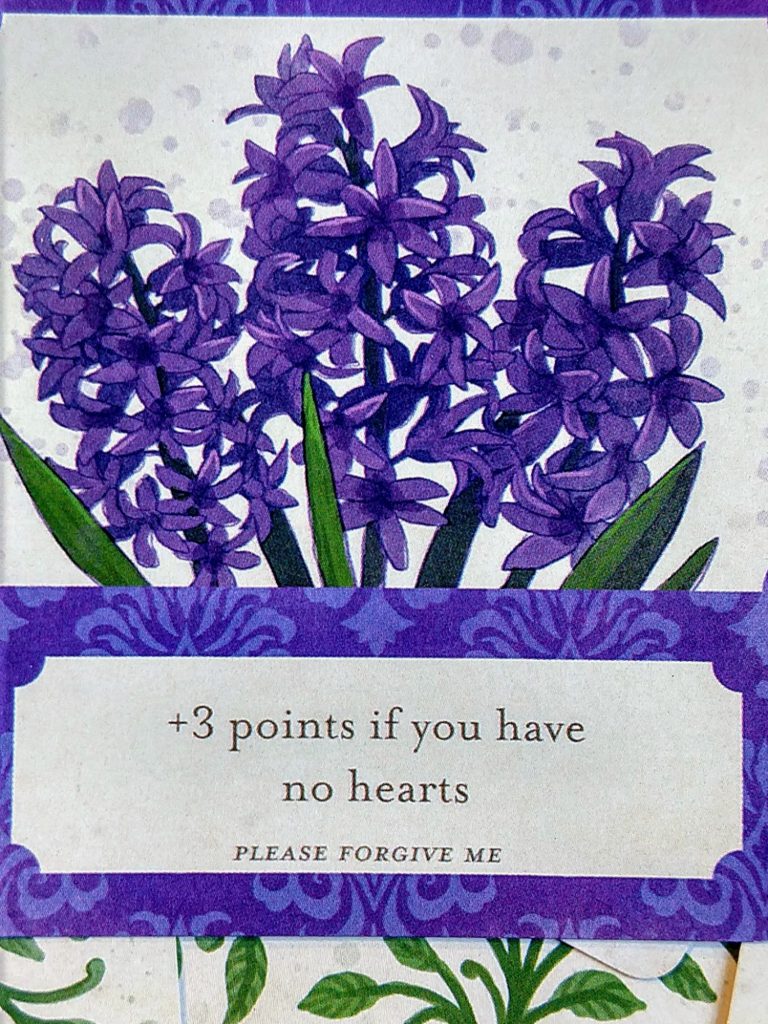 Whether players opt to lean into the theme or not, Tussie Mussie does something wondrous with just 18 cards over the span of a few seconds of cardplay: it fully immerses players in the feelings, vulnerabilities, and frisson of a first-crush, first-blush courtship. The face-up/face-down mechanic invokes an age-old, quivering uncertainty: will they or won’t they? Do they or don’t they? A true intimacy is created between players that is palpable at the table and organically rooted in the game itself. You’re not merely trading and collecting sets of cards for points anymore – you are putting your own heart out there, into the universe, hoping to be seen and heard and felt in reciprocation.

Tussie Mussie is the second published game by designer Elizabeth Hargrave. Her first title, Wingspan, was an instant hit and Kennerspiel des Jahres (German Game of the Year) nominee. Each game shares DNA: both are tactical card games and tableau games. Both celebrate nature: Tussie Mussie is as much a paean to flowers as Wingspan was to bird watching. And both games are balanced, clean designs. With Tussie Mussie, Ms. Hargrave demonstrates that there will be no sophomore slump. 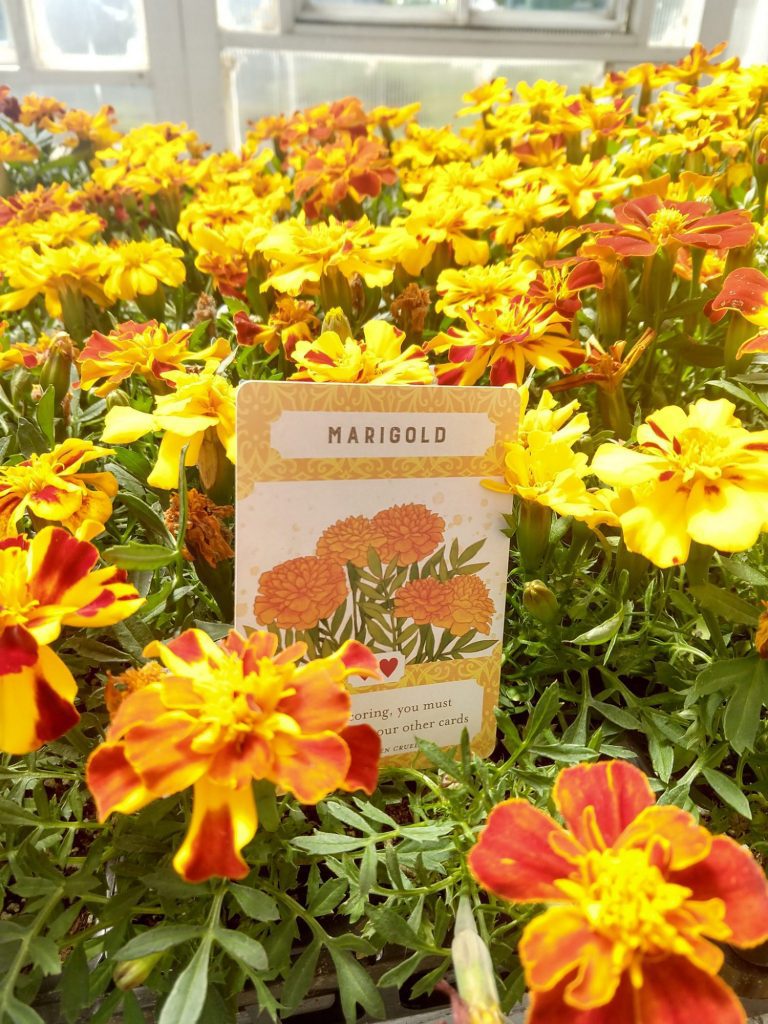 Tussie Mussie blooms resplendently within its minimalist package. It resurrects a 150-year old dead “language” to highlight a lesser-known fad in history. It’s a love letter that celebrates the beauty of flowers. It’s also a love letter to the players. In Tussie Mussie players send and receive flowers to win, but the game itself delivers a message: the joyful reminder that how we think, feel, and communicate in the realm of love and friendship is timeless.