Trekking the World Review – Citizen of the World

Last year I had the pleasure of reviewing Trekking the National Parks by Underdog Games, a lovely little venture that brought to mind childhood trips and cherished games with loved ones. Little did I know that Underdog would be bringing a new title to Kickstarter this year, Trekking the World, which inherits both the naming and some of the same gameplay elements from its predecessor. How does it stack up?

From a presentation standpoint, Trekking the World is every bit as charming as National Parks. Instead of using photographs for the Destination cards, here the artwork is gorgeously illustrated, an impressionist swirl of high-saturation hues. Each card has several paragraphs of information on the real-life locations, perfect for school-age children. While wooden cubes replace the previous game’s colored stones, the fantastic leathery bag that holds them feels just as nice as before. 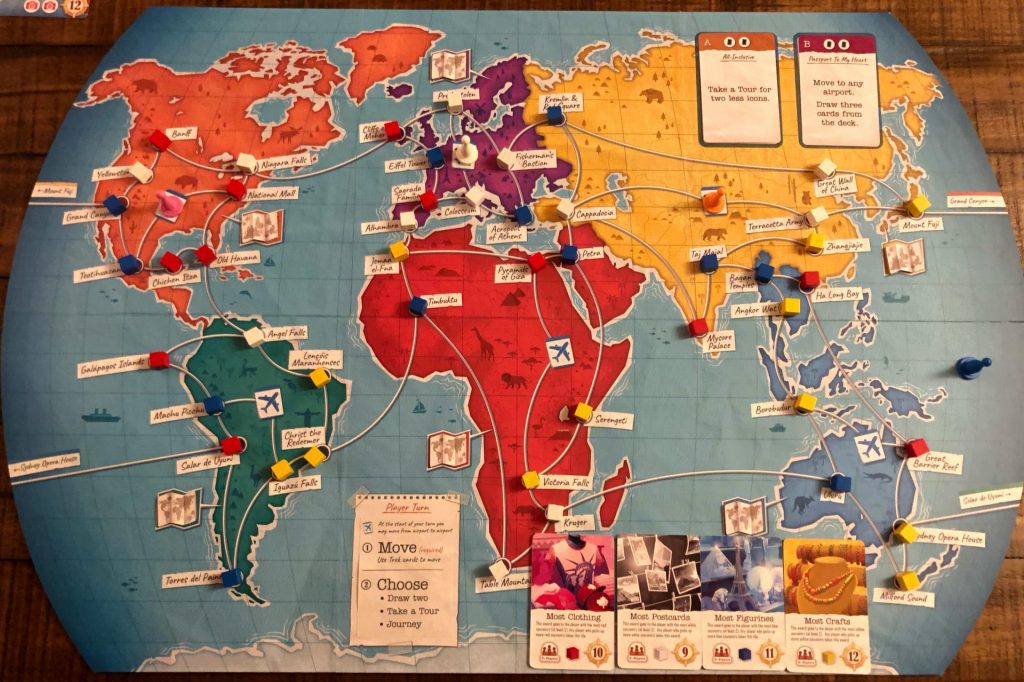 The board deserves a little extra attention here: its corners have been rounded to make it look like a projection of a globe, a nice touch which helps highlight the theme. This time around players also have their own suitcase-shaped boards in each player’s color, another fun detail that shows how much thought and care have gone into the production even before the game made it to Kickstarter.

Just as the theme of Trekking the World feels like a natural next step from the American landscape of National Parks, so too does the gameplay. Players are again gathering Trek cards, each numbered between one and three and bearing one of four icons. The Trek cards are used for both movement — using the numbers — and for set collection by using the suit.

There are always 4 face-up Trek cards available; when a player draws they may take one of these or draw one from the deck.

Each space on the board (except for the airports) has a matching Destination card, with four such cards available for purchase at any given time provided the player is occupying that location and has the requisite set of matching Trek cards. Gathering Destination cards is the primary way to earn victory points.

Players may complete any one of the 4 available Destinations, with the two furthest to the right worth either 3 or 5 extra points

This is not merely a retread, however. Where the previous game had players picking up colored stones on each space that gave victory points at the end for having the majority of each color, Trekking the World’s wooden cubes grant points for having the most of each color as well as for creating each set of four different colors. This adds a little nuance to movement, as players not only have to decide which Destination to pursue but also weigh whether it might be better to grab a cube that completes a set or contests a majority. 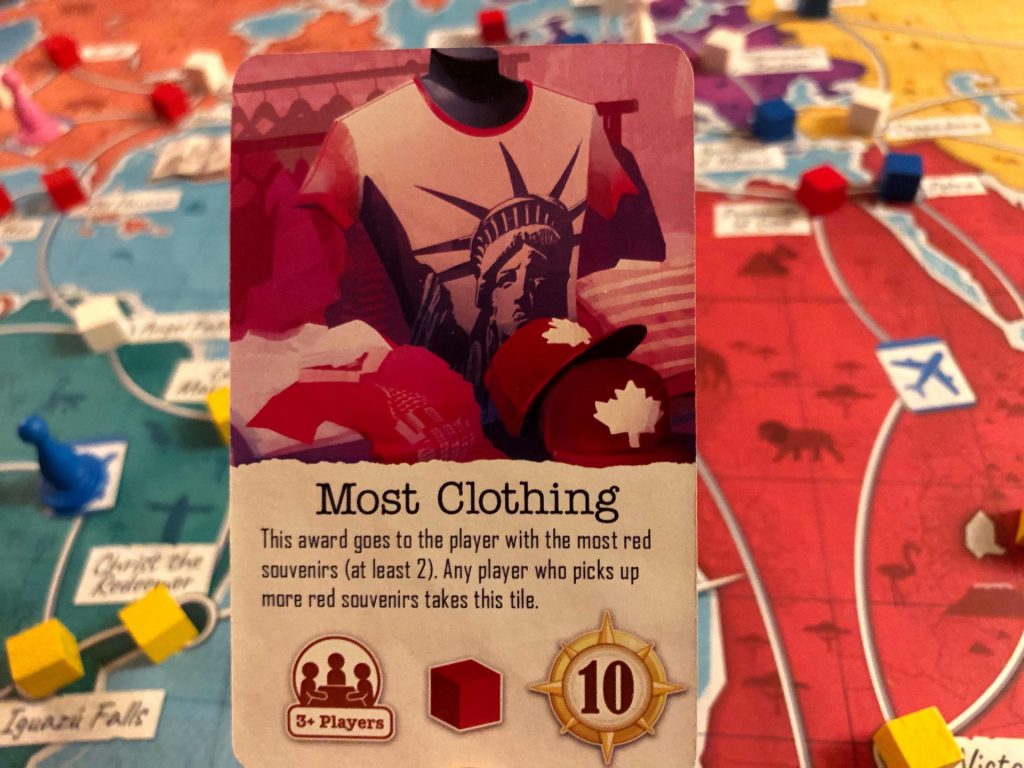 The action system has been upgraded as well, adding a mandatory movement phase and then offering a choice of one of three options: draw two Trek cards (either from the deck or from a face-up display), Take a Tour by purchasing a Destination card, or Take a Journey by utilizing one of the two special abilities chosen randomly at the start of the game. 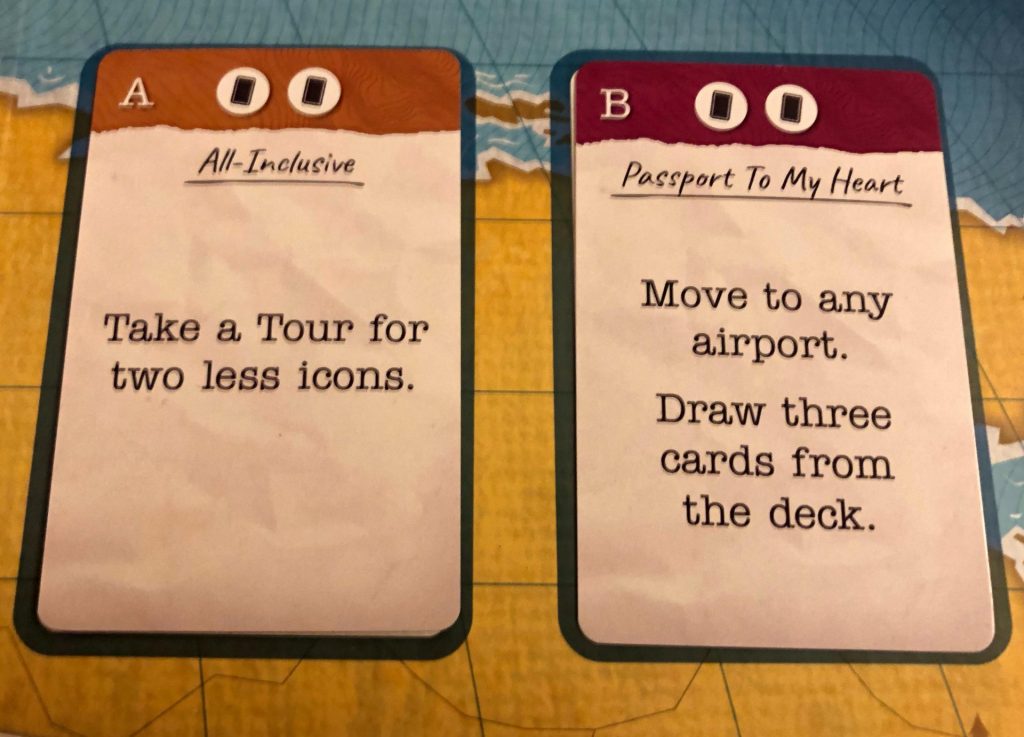 Overall the gameplay feels different but comparable to Trekking the National Parks. The special abilities are fun and powerful when used at the right moment, yet don’t overshadow the other options as they need two matching icons to activate. Adding a wider variety of sets to collect is a great move, making the game deeper without being more complicated. Each continent also offers a secret number of bonus points to the player who picks up the last cube there, which lends itself to some sneaky strategy as players try not to grab the penultimate cube or rush in to steal the rewards from a nearly-finished continent. All of these additions make the game feel like an excellent upgrade to Trekking the National Parks.

Chaos in the New World

However, these positive changes do come with a few quirks. The shape of the world map means that the action feels a little bit more separated, especially with fewer players. Unless all of the available Destinations (or cubes of a specific color) are on the same continent, there’s rarely a reason for players to move near each other. That’s not inherently bad: for a family-friendly game it’s nice that players don’t have to claw their way past each other to win. 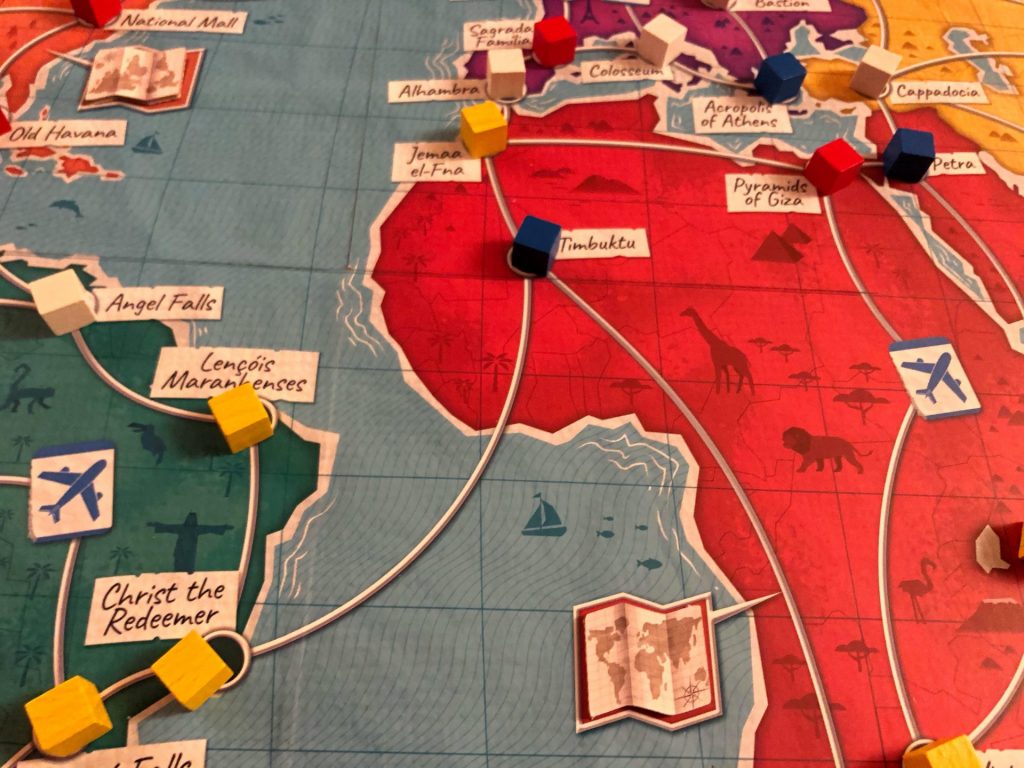 When players do interact it can be quite damaging. Because players can’t share spaces or move past each other, a well-placed pawn can easily block a player from making the most of their turn, if not voiding it entirely. What makes this more troublesome than in the previous game is the mandatory movement phase. These trekkers can’t sit still!

Moving costs Trek cards, the same ones needed for Tours and Journeys, and there’s no way to “camp out” on a spot and gather resources. This makes turns often seem like taking two steps forward and one step back. It takes careful planning and a little luck to have the right cards at the right time with enough to spare for movement. As a result players may sometimes feel like ping-pong balls bouncing around the continent, seeing everything but the Destination they desire, before eventually either succeeding or moving on. 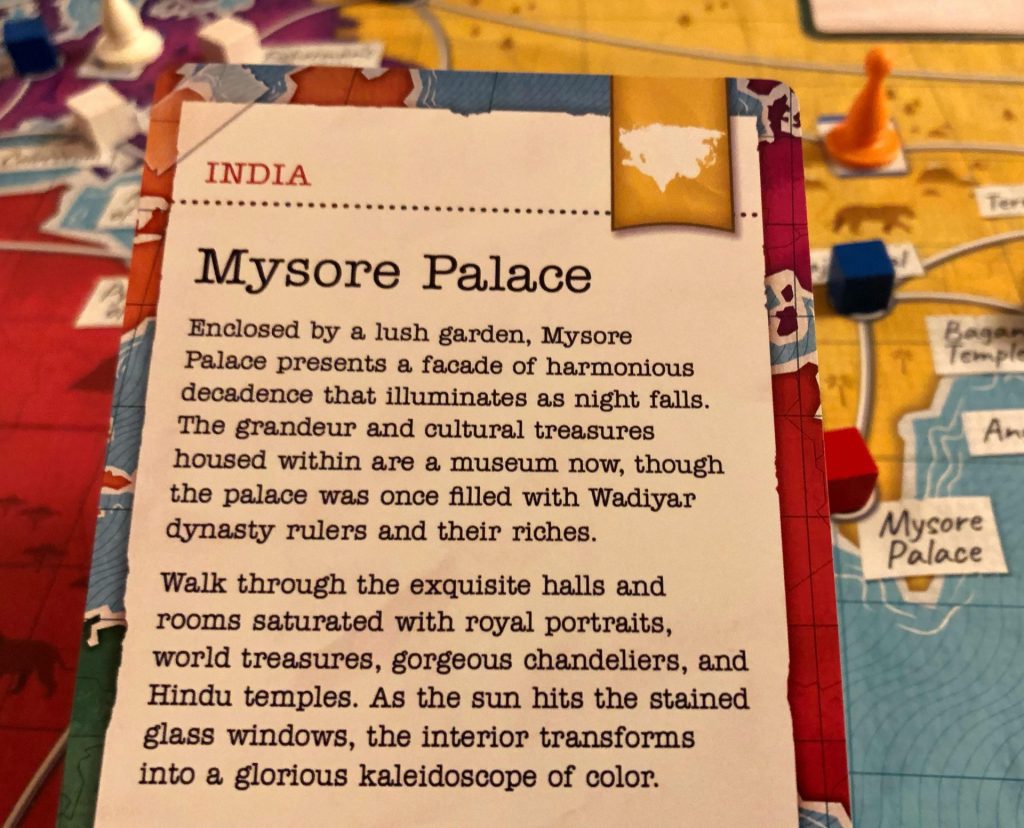 Trekking the World is as informative as it is beautiful.

After a game or two, the movement aspect of Trekking the World becomes more manageable, though younger players might still struggle. Some players may even enjoy jostling each other for position, playing the game more like a defensive battle than a casual tour.

Despite a few potential flaws, some of which may be addressed as it moves out of Kickstarter, Trekking the World is still a lot of fun and a great sequel to Trekking the National Parks. If your family enjoyed the first game, you should feel confident picking up this well-crafted labor of love.

Head to Kickstarter now to back Trekking the World!