Note: This review covers the 2nd edition of Trekking the National Parks, a copy of which was provided by the publisher for review. Our opinions remain our own.

Almost 30 years ago, my grandparents picked my mom and I up in a Winnebago and ferried us across the nation for my first cross-country move, turning that major event into a classic American road trip that took us through every national park, monument, historic area, and scenic overlook they could find. I have flashes of memories of those sites: the hot springs and geysers of Yellowstone National Park, the cliffs of the Badlands, the azure depths of Crater Lake. Mixed in are memories of the games that kept us entertained during those long days and nights, particularly one game of Uno that we still joke about to this day, even though my grandparents are no longer with us.

Many years later, my wife and I would visit Yellowstone on our first shared cross-country move. Seeing it as an adult, at the moment that the two of us were truly striking out on our own, gave me a new perspective on that long-ago trip. I was beginning to fall in love with the National Parks. Now that we’re parents, my wife and I are trying to pass that love on to the next generation, just as my grandparents tried to do for me.

From the moment you open the box, it’s clear that Trekking the National Parks is a family game in the truest possible sense. Inside the box lid is the story of the designer’s parents and their quest to visit every national park in the nation. On these trips their family often played board games together, so making a game about their travels was a natural fit. 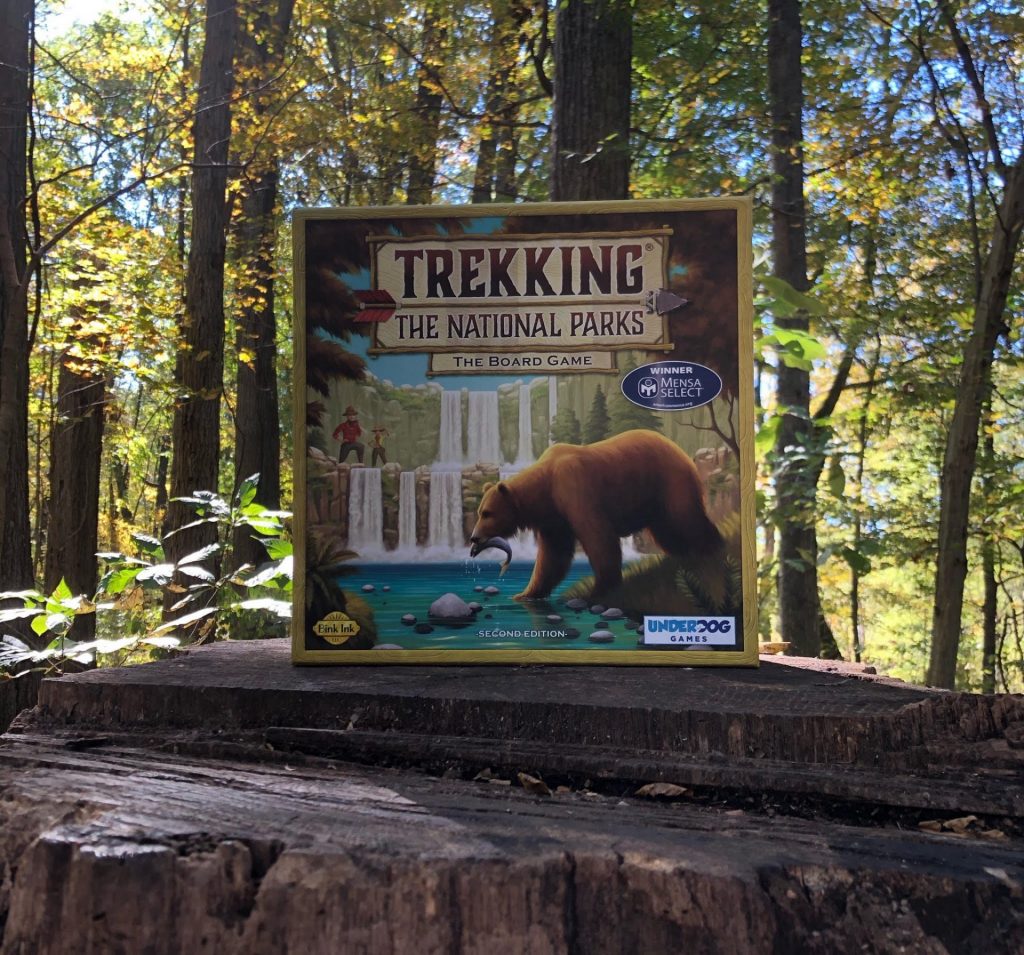 This story touched me deeply, in part because it hews so closely to my own experiences. We often forget that game designers are people too, not just brains full of rules, but it’s impossible to separate this game from either its theme or its creator. There’s a real joy here, a passion for the National Parks and a deep love for his parents that makes the game shine.

Much like the parks it pays tribute to, Trekking the National Parks is beautiful and inviting. The chunky wooden hiker meeples are kid-friendly and fun to hold. High-quality photographs (many taken by the designer’s parents) sit beneath an informative blurb on each of the park cards, making it easy to see why this game won a MENSA Select award. There’s even a lovely leathery drawstring bag that holds an assortment of “stones”. 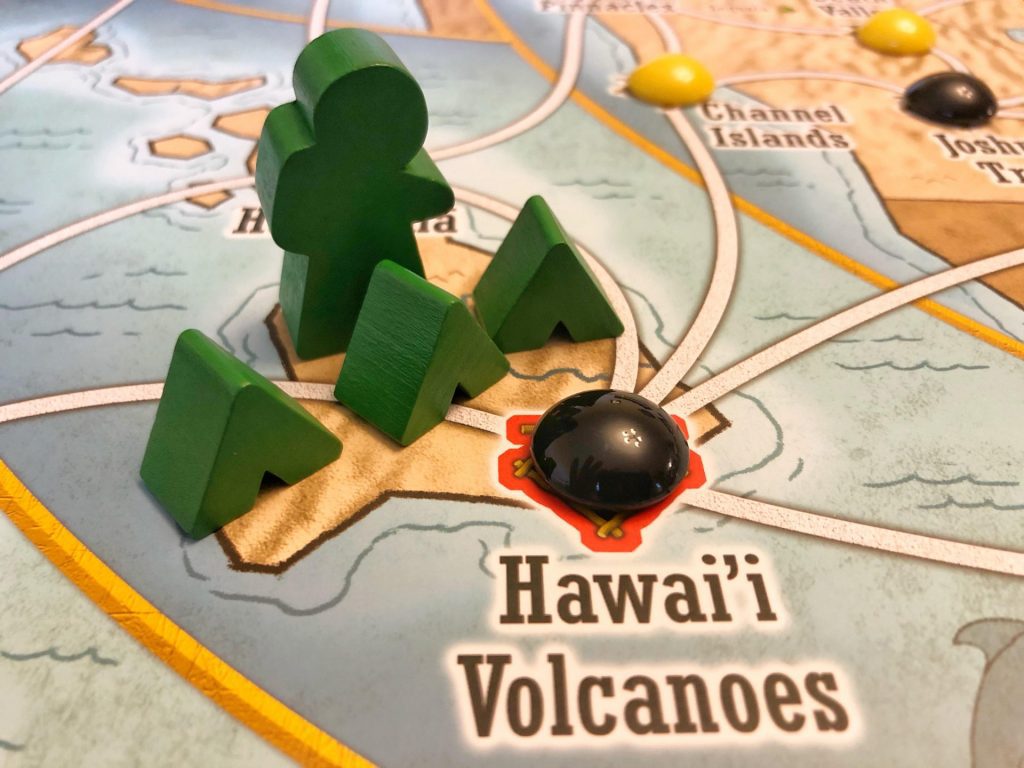 Each player gets a hiker meeple as well as three campsites.

My one complaint is that this is a surprisingly big box, and the map-like board is particularly large. That wouldn’t be a big deal normally — it’s perfectly fine for playing at home — but this would be such a fantastic game to carry on a backpacking or camping trip if only it were smaller. I’d love to see a pocket edition someday that keeps the same basic gameplay in a more portable format.

In a game of Trekking the National Parks, players will be trying to gain the most points by moving around the map to simulate a cross-country tour of the National Parks. To accomplish this, they’ll be managing their hand of Trek cards, which are numbered 1-4 in 5 different suits. Trek cards are used for both movement points (using the numbers) and for collecting sets to exchange for Parks cards (using the suits). 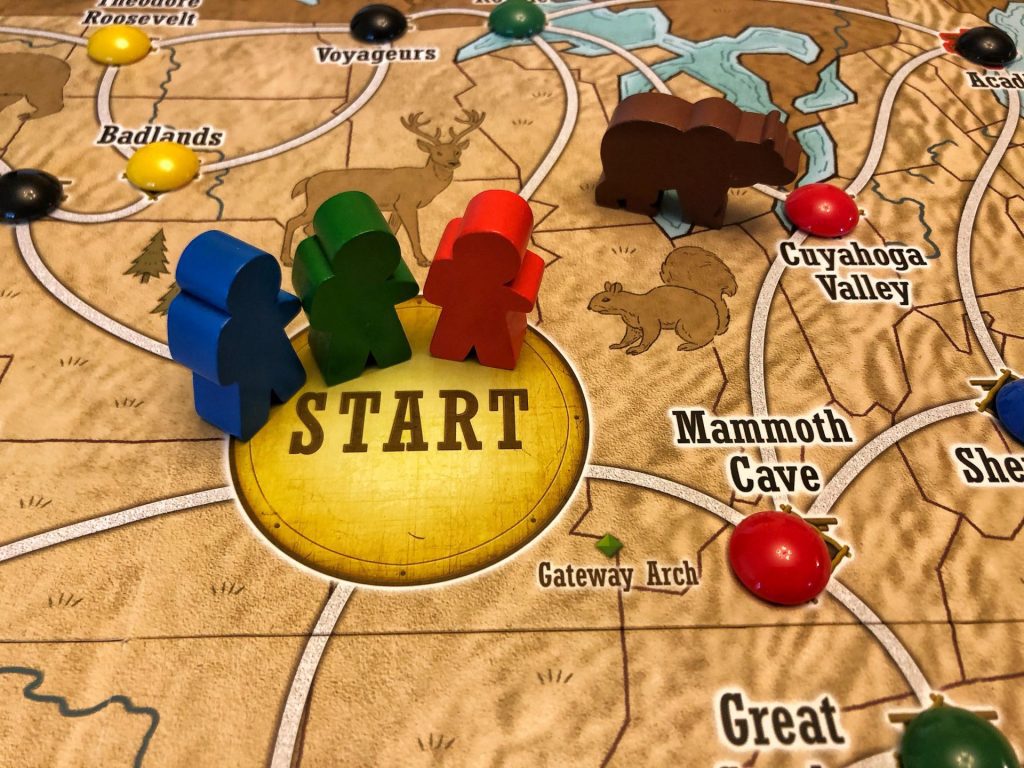 The bear meeple is meant to mark the first player, but it’s hard to resist placing it on the map.

On a player’s turn they can take 2 actions chosen from 4 options: draw Trek cards, move, occupy a Major Park, or claim a Minor Park.

Drawing Trek cards works similarly to the train system in Ticket to Ride; players can pick from among 5 visible cards or draw from the top of the deck. However, unlike Ticket to Ride, there are no “wild cards”.

A sample of the Trek cards

Moving is done by discarding one or more held Trek cards, then moving a number of spaces exactly equal to the sum of the discarded cards. Movement cannot cross over the same section twice, nor can a piece pass through a spot occupied by another player’s piece; however, if a piece lands on an occupied spot, it can send the previous occupant back to start. Players can also gather stones of various colors for being the first player to land on a space, with bonus points at game’s end for having the most or second-most number of stones in each color. 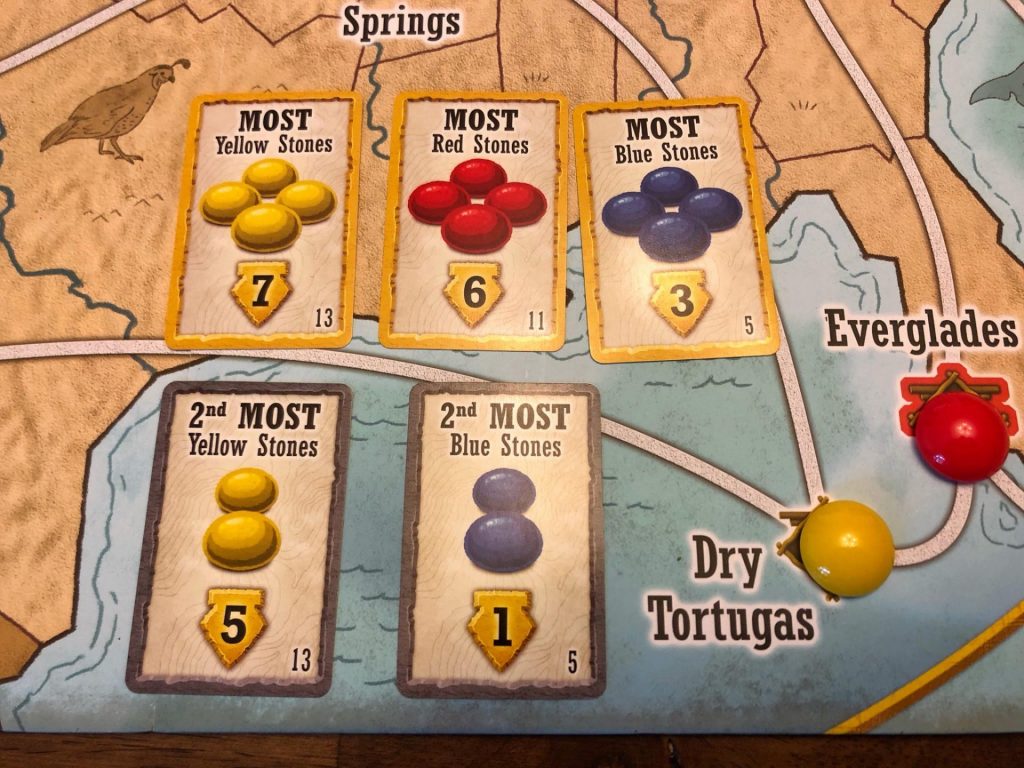 Picking up stones along your travels can pay off at the end of the game.

Occupying and claiming Parks cards are essentially variants of each other: in both cases, the player must be at the appropriate location on the map and then discard a set of Trek cards whose suits match the requirements on the Parks card. There are always 3 Major and 3 Minor Parks in play. 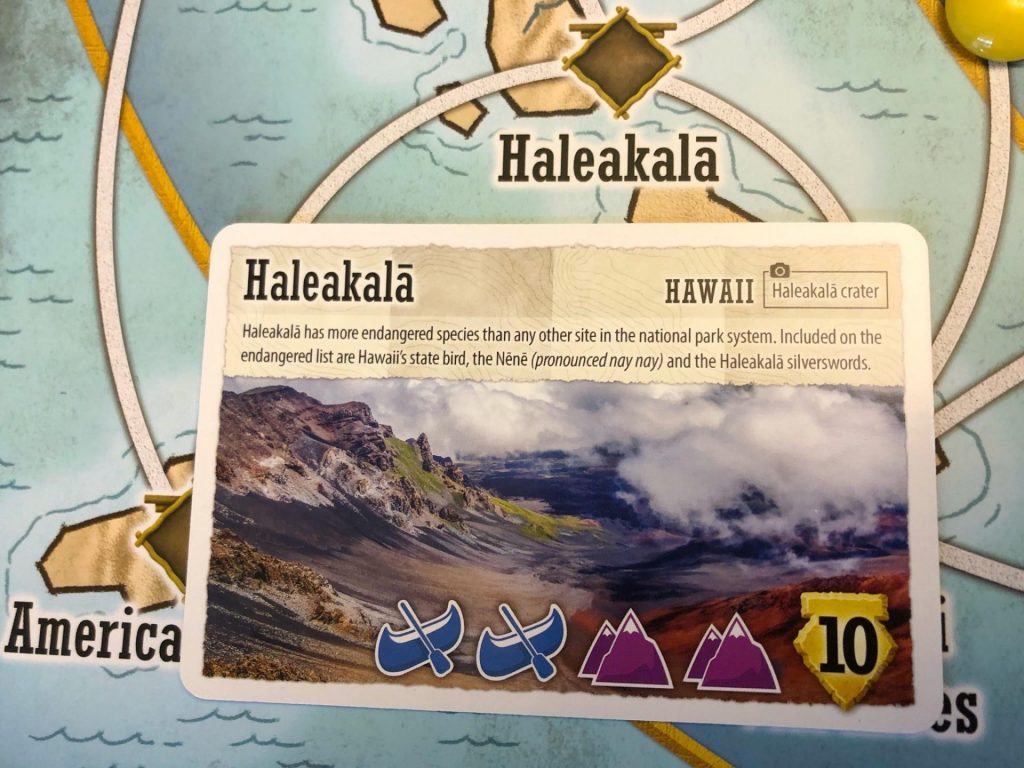 One of the Minor Park cards

Minor Parks are claimed solely by the player and will score a given number of points at the end of the game; these cards are replaced once purchased. Major Parks can be occupied by any number of players over the course of the game, are not replaced when occupied, and give out both victory points at the end as well as special abilities that can be used during the game.

The way that cards are used for both movement and game progress reminds me slightly of Pandemic, though nowhere near as tense. Getting a good mix of Trek cards is important, but stopping to draw can mean that the park you were eyeing gets stolen by another player. On the other hand, moving to a park you can’t yet afford can leave you vulnerable to being bounced back to start.

Trekking the National Parks finds a nice middle ground here. The choices aren’t too difficult, yet you can never quite do everything you want to do in a single turn. Having the flexibility of two actions per turn, including doing the same thing twice, means that there are lots of opportunities to optimize your route and set up future moves. Turns are quick, and while sometimes they aren’t particularly exciting, the net effect is pleasant. Overall, the level of strategy is perfect for the target audience: kids and casual gamers.

On a purely emotional level, I can’t help but like Trekking the National Parks. It’s a true labor of love, a light informative game that can keep kids interested without putting adults to sleep. That’s no mean feat, and I’m looking forward to playing it with my daughter for years to come, helping her discover the beauty of the natural world.

And if I close my eyes, I can envision a young kid playing this game inside a Winnebago rolling across the country, his eyes full of wonder as he looks from the cards to the landscapes outside the window, sharing the joy of games and travel with loved ones. For me, that’s a strong recommendation indeed.

For a look at another game which uses the National Parks as a theme, check out both our written and video reviews of PARKS. 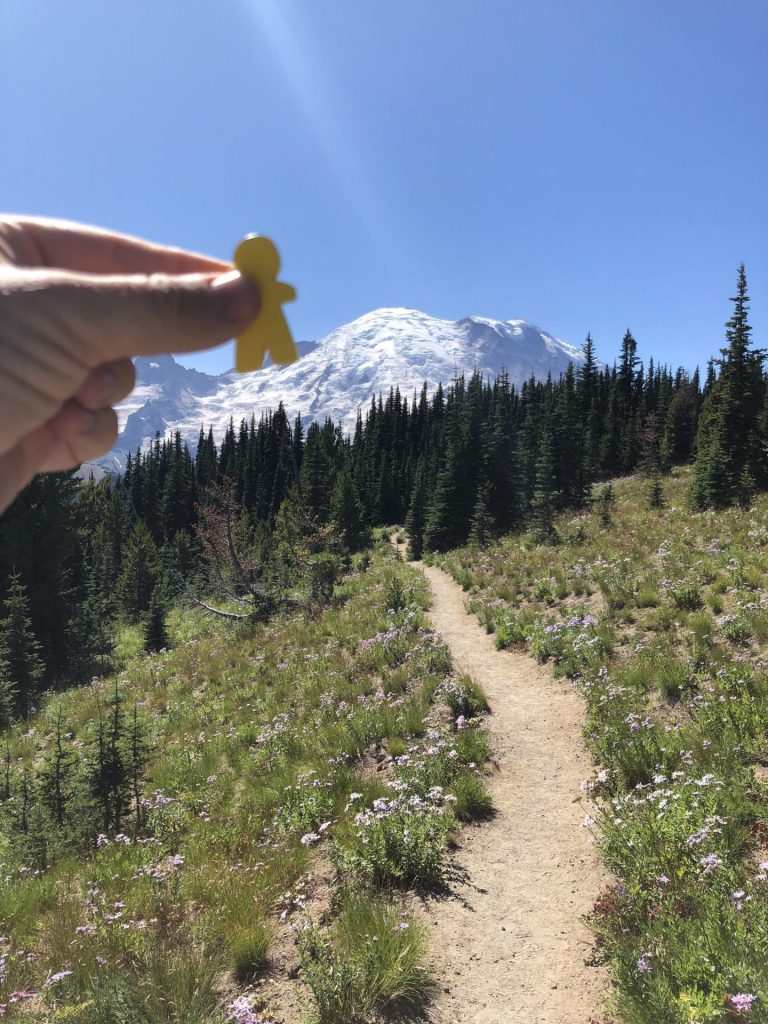 Now get out there and Trek those Parks!