In Time of Legends: Destinies each player chooses a character and via a mobile app will  explore locations, talk to other characters, and collect different items to try and accomplish their character’s destiny first. Each character starts with 2 coins and 5 dice (2 big Main Dice and 3 small Effort Dice) as well as their player board to show their different skill stats.

After a brief introduction of the scenario, players will tell the app which characters will be in the scenario. The app will display the different starting stats for each character, then players will place skill tokens on the skill track of their player board corresponding to the values provided by the app. 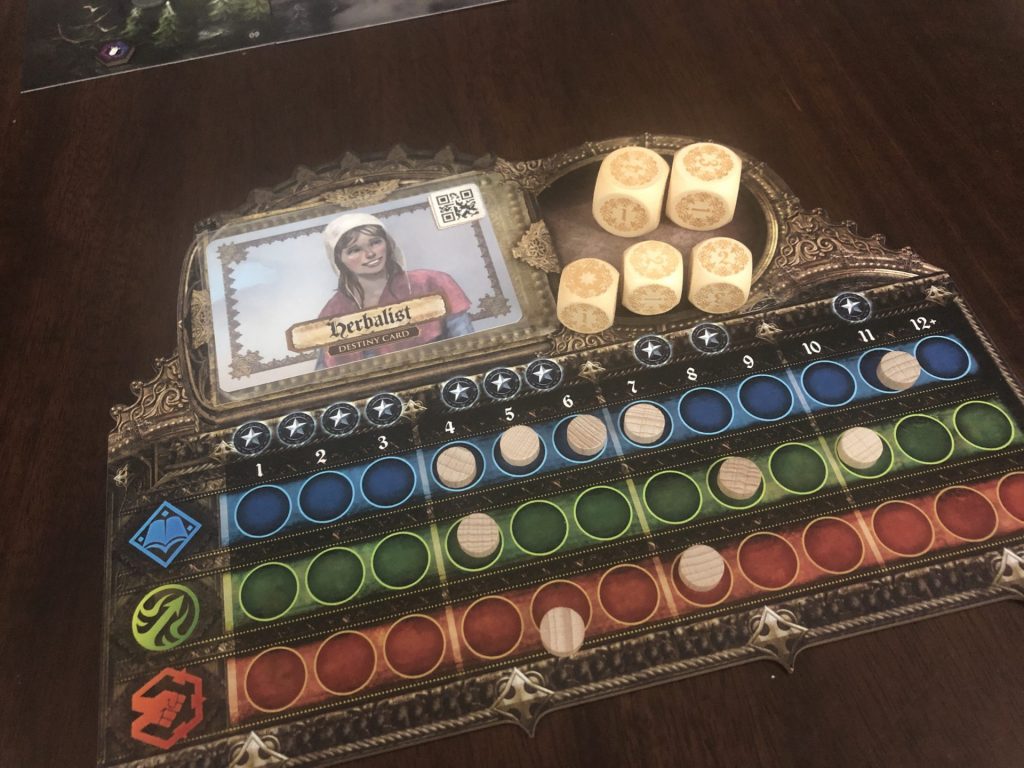 Player board with skill tokens

Then the app will walk players through the setup which normally consists of laying certain tiles faceup or facedown in a specific pattern and placing certain areas of interest or miniatures to indicate different characters players can interact with throughout the scenario.

During the game players will take turns controlling the app. On a player’s turn they may move their character miniature up to two tiles away from their current position and then interact with the app. However, if a player moves to an unexplored (facedown) tile they must stop their movement immediately,  flip the tile over and click on the unexplored tile in the app. Similar to setup, the app will tell players where to place points of interest or other miniatures on this now explored tile.

After a player has performed their move action they can interact with anything on their character’s current location. The app will show a short paragraph along with different options. Some options will show an icon indicating a skill test is involved. Each character has 3 different skills – Intelligence (blue), Dexterity (Green), and Power (red). When a player selects one of those options they will take their 2 Main dice and as many of their Effort dice as they have available and rolls them. They will then add the total of the dice results and compare it to their stats on their player board. The player will look at their die total, find that numbered column on the player board, and add up any skill tokens that are equal to the rolled sum or lower (each skill token counts as one success). Any die showing a star symbol is an automatic success. The player will enter the number of successes in the app to determine the result. 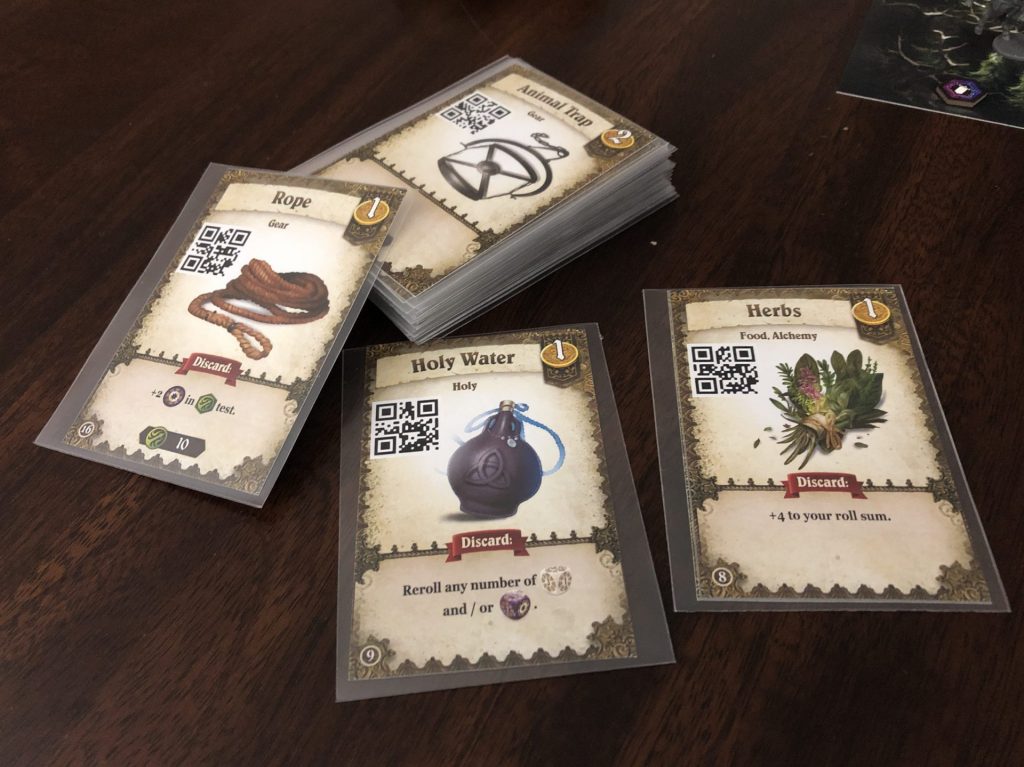 Other options include scanning an item to activate it or asking a character a question to learn more about an item or even about the player’s character. After choosing one of these options the player will scan the QR code on the card they want to use or ask about and the app will show the result.

Players will also gain money or experience tokens by accomplishing different things within the scenario. Experience points can then be used to purchase more skill tokens to increase the success ratio for different skills.

Play will continue in this manner until someone has fulfilled their character’s destiny, at which time a special icon will appear. Clicking on this icon will trigger the epic finale: a series of questions and tests which will determine the final actions for the character who triggered it. Depending on how well-equipped they are, it can take several turns for a player to fulfill their Destiny and win, so other players may still have a chance to trigger their own epic finale. Once a player has fulfilled their Destiny the app will declare them the winner and give a final synopsis. 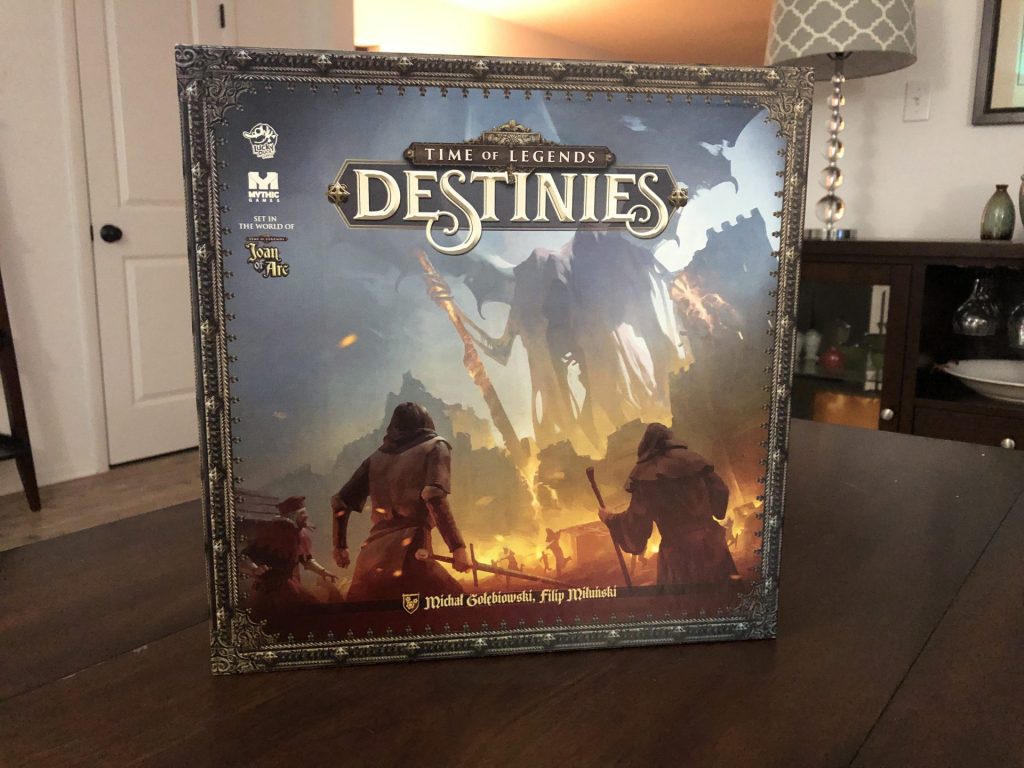 I thoroughly enjoy story driven games like Mansions of Madness and Chronicles of Crime so when I heard the premise for Time of Legends I was immediately interested! Chronicles of Crime is one of my game group’s favorites so hearing Lucky Duck was also a part of the game made it even more of a must try. I have to admit it did not disappoint!

The demo copy I received only had one scenario available on the app, but if this is any indication of how the rest will be then it is a great start! The story is extremely engaging and well put together. Once the scenario was over I wanted to start another one just so I could explore more of the world this game has created. I love when games immerse you in the story and this game definitely delivers!

I also enjoy the skill tests. Each player starts with 2 Main dice and 3 Effort dice. The 2 Main dice are always available; however, once you use an Effort dice you have to discard it and at the start of your next turn you can retrieve one of your discarded Effort dice. I love the thought process of trying to decide how many Effort dice to use or whether to even use them at all. Granted, they help you increase your chances of getting a higher result so you can possibly get more successes, but is this particular skill test where I want to use them? And then rolling the dice to see what results you get makes for some tense moments in the game, which I adore! 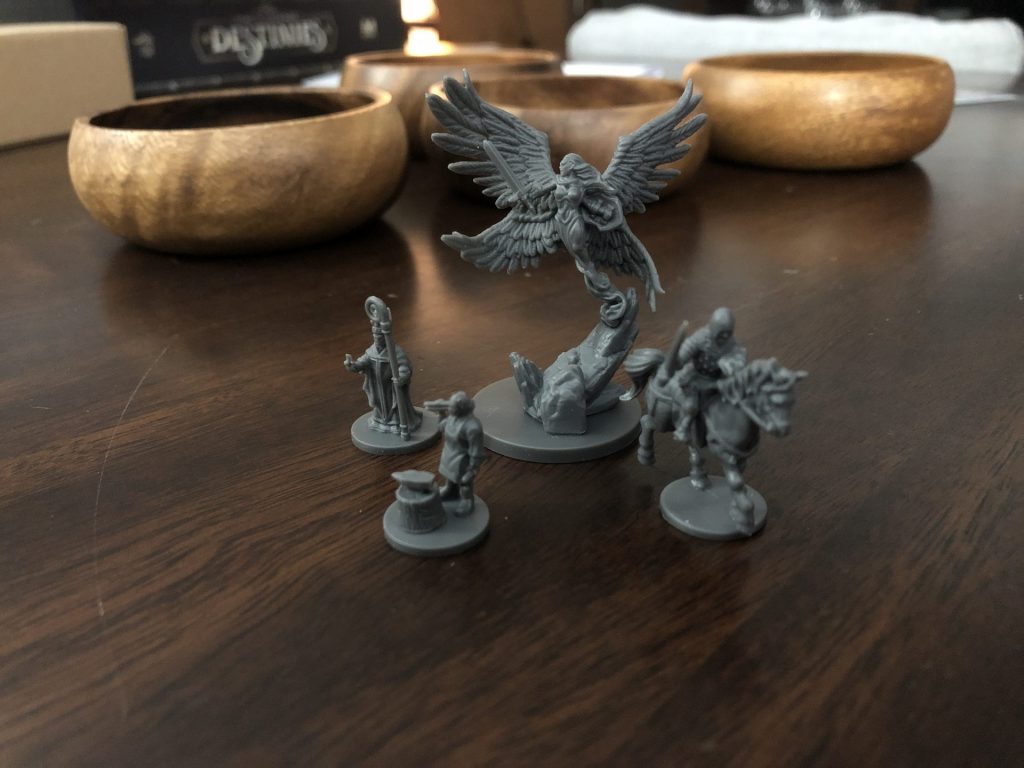 some of the miniatures used in the game

Overall the app worked great! It is still in beta, but is in pretty good shape for final production by next year. We played using an iPhone 8 and the text can be a bit small, so if that will be an issue then I would recommend using an iPad or equivalent or casting it to a TV via an AppleTV which is what we ended up doing and worked great!

A few things to keep in mind if you are thinking of backing this on Kickstarter. This game does only play 1-3 players which may turn some people off if they normally play with 4. It works great at 2 or 3 and will have a solo mode, even though it was not completely done before the writing of this review. That’s not a deal breaker for me, but just wanted to let people know what to expect.

Even though this is a competitive game all the information received through the app is public knowledge. At one point in the scenario there was a location where each character could talk to someone via the app and basically that character’s destiny was somewhat revealed to everyone. I didn’t have a problem with it since I was just interested in what was going on with my character; however, for those types of players that are paying attention they can potentially screw up other players. No guarantee this will happen in other scenarios but the potential is there since all the knowledge is public. 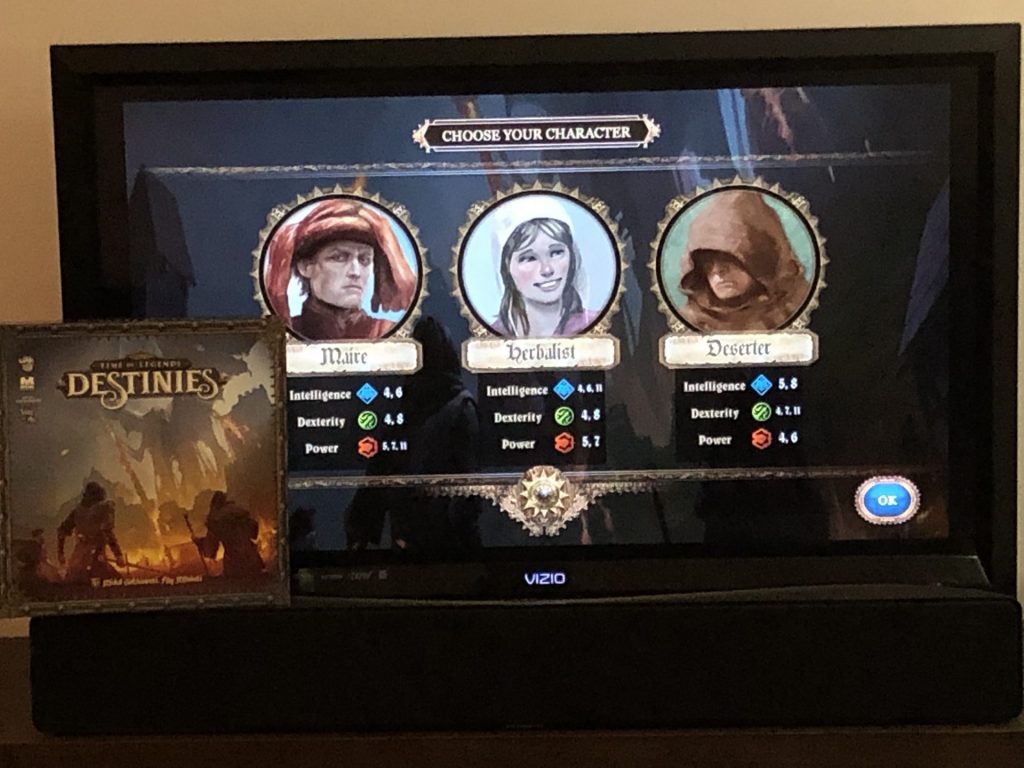 This game is also in the same realm as escape room games in that you can only play each scenario one time. Each character has two different ways to accomplish their destiny so you could make the argument you could play it twice, but your second time around will not have as much of the discovery as the first time through it. However, as with Chronicles of Crime, players will have access to the scenario editor to create their own. The only thing that will not be included in the box for the scenario are the character destiny cards but those can easily be printed and you are ready to play.

What more can I say? If you are even slightly interested in any of the things mentioned, check out their Kickstarter and back it. You will not be disappointed!