Sprawlopolis Review – Is This a City for Ants?

My love for Circle the Wagons, the 18 card boomtown building micro game from Button Shy is well documented. In fact I’ve called it one of the best games of 2017, regardless of size. So when I found out that Button Shy was releasing a new game called Sprawlopolis from the same designers (Danny Devine, Paul Kluka, and Steven Aramini), based around the same mechanisms as Circle the Wagons, I knew I had to try it out. 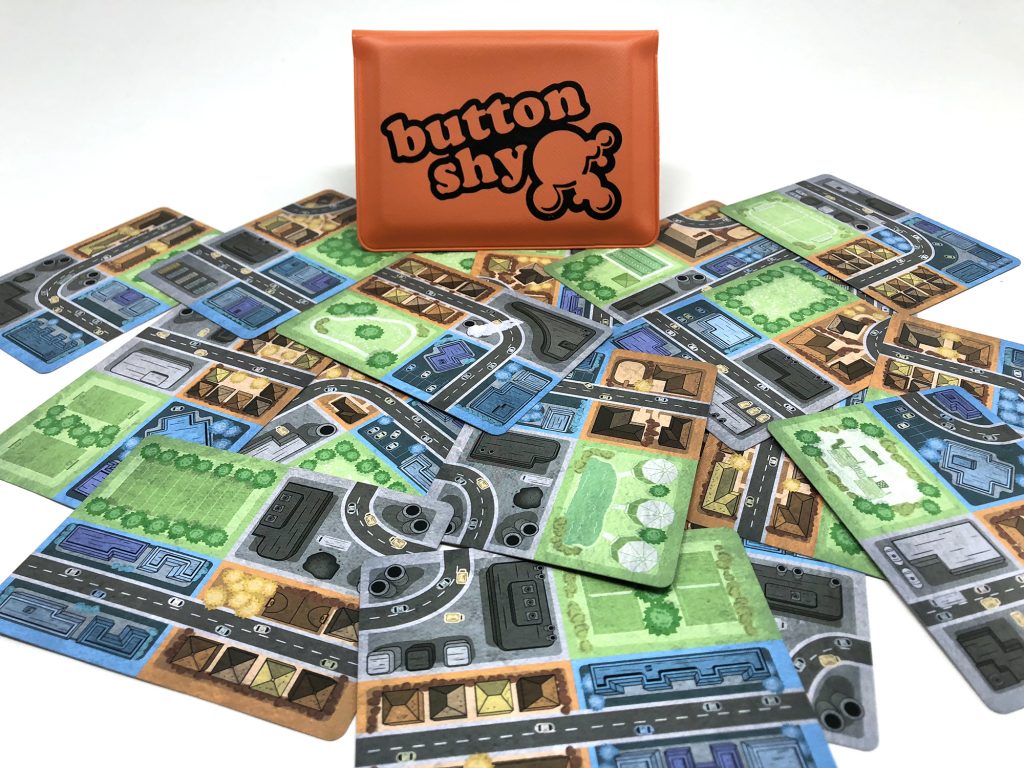 Circle the Wagons was 2 player, and competitive, but Sprawlopolis is multiplayer AND cooperative…take THAT Pandemic! In Sprawlopolis players work together to build a unique metropolis which meets several basic rules, and 3 rules which are unique to a particular game. Google tells me that 3 cards picked out of 18 results in over 800 distinct combinations, pretty hefty variety for a game that fits in your pocket.

Setup for Sprawlopolis couldn’t be easier. Shuffle the cards and select 3 off the top, turned city side down. Make note of the numbers within yellow circles at the top left corner of each scoring card. Deal 3 cards to the first player, and one card to each additional player.

The first player selects 1 card from their hand and plays it to the table, city side face up. They then pass their remaining cards to the player on their left and draw a single card from the top of the deck. Repeat this process until the 15 remaining cards have been played to the city, at which point the game ends.

The game is simple enough, but let’s take a moment to cover how cards should be played. There are only 4 placement rules, which are as follows: 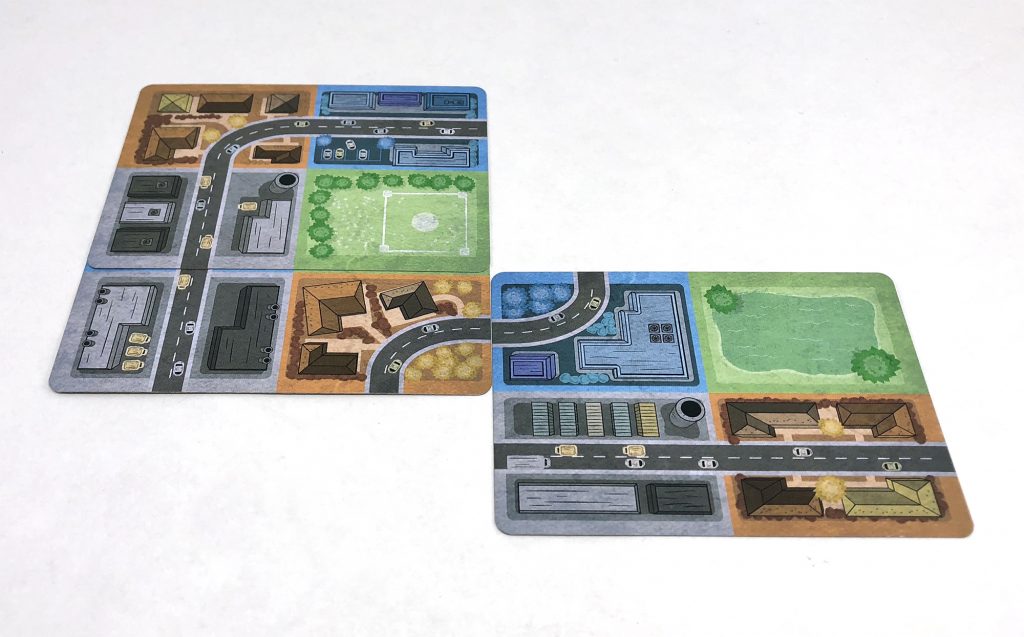 These cards are correctly placed. 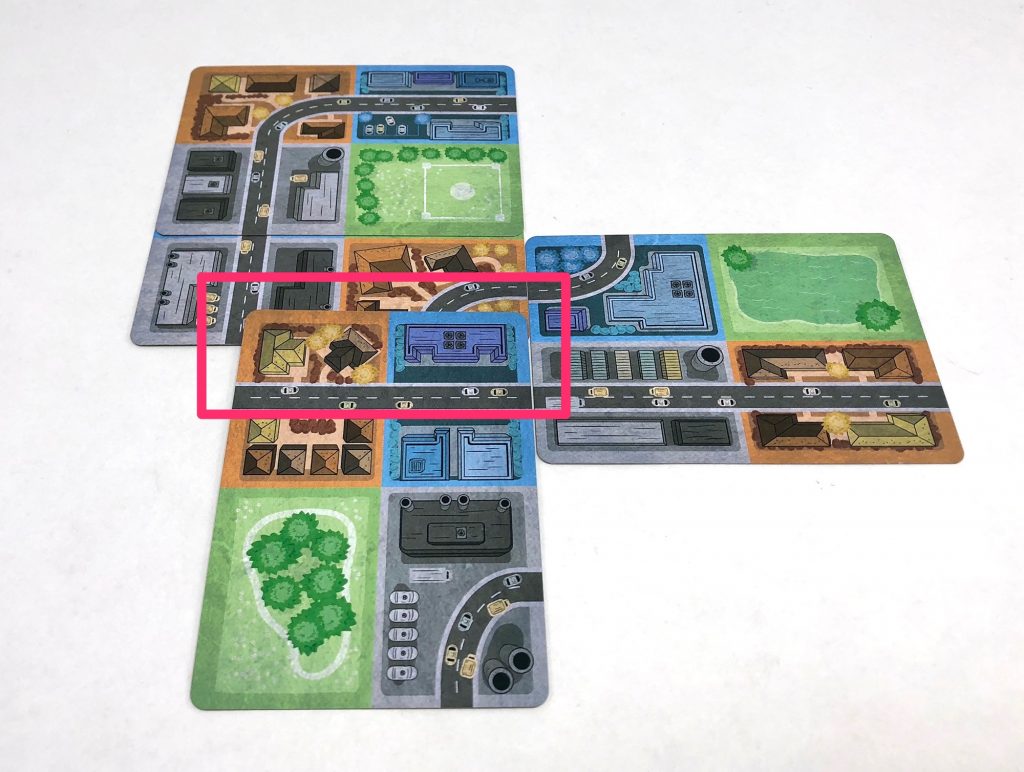 Cards must all be placed in the same alignment. This card is incorrectly placed.

Cards must always be placed so that at least one side touches another card. This card is placed incorrectly.

You’re not just building a city out of the goodness of your heart, you want points…so let’s talk about how scoring works. Sprawlopolis isn’t the sort of co-op in which you win or lose, you have to achieve a certain score. Remember the numbers in yellow circles at the top of each scoring card? Add those together and that will be the score you need to beat.

Just like in Circle the Wagons, players will receive 1 point per block for the largest single grouping of each of the 4 zones: residential (red/orange), commercial (blue), parks (green), and industrial (grey). 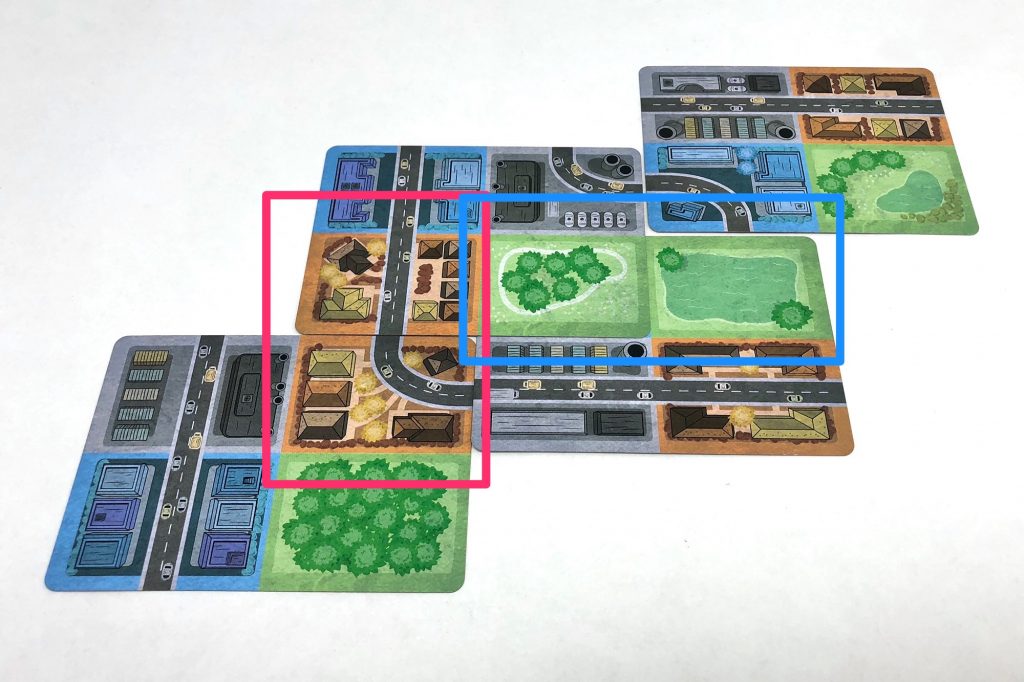 The orange zone (residential) and the green zone (parks) would both score two points. Grey (industrial), and blue (commercial) would each score one point.

Next you subtract 1 point for each individual road in your city. Note that connected roads will still only reduce your score by a single point (hint, try to connect as many roads as possible).

Each of these three roads would garner a 1 point penalty.

Finally players will tally points from the unique combination of scoring cards dealt at the beginning of the game. 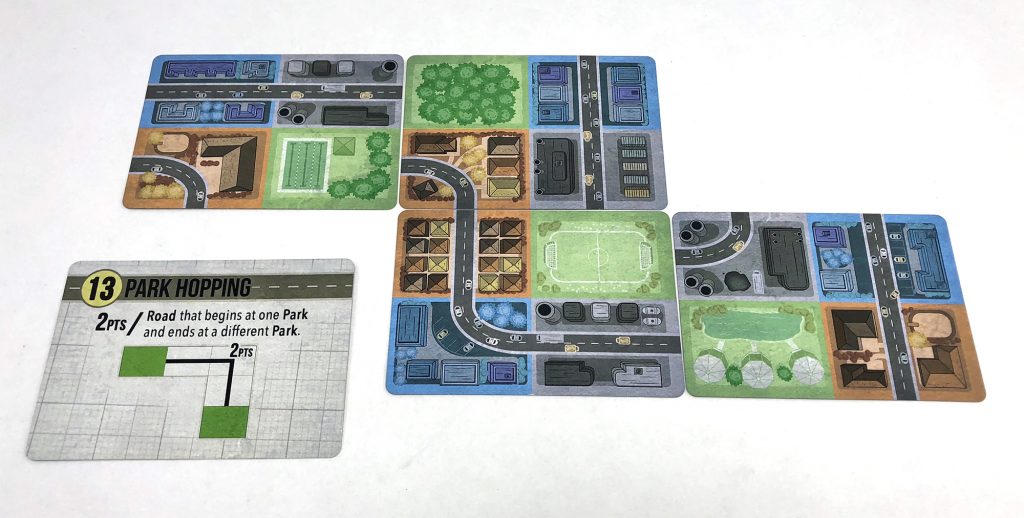 This would be worth 2 points. 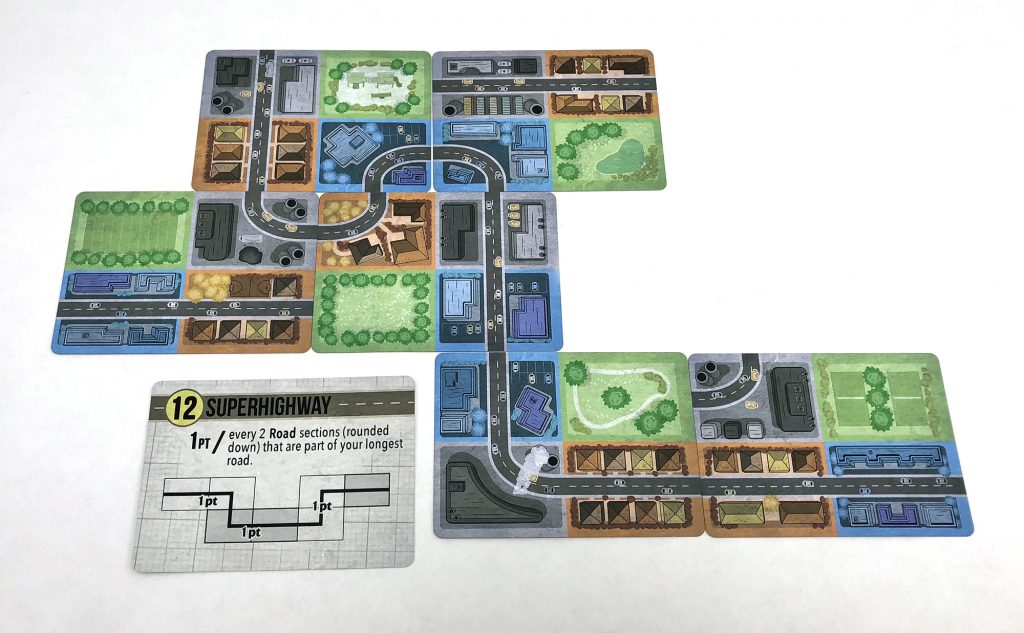 13 segments in the longest road would result in 6 points. 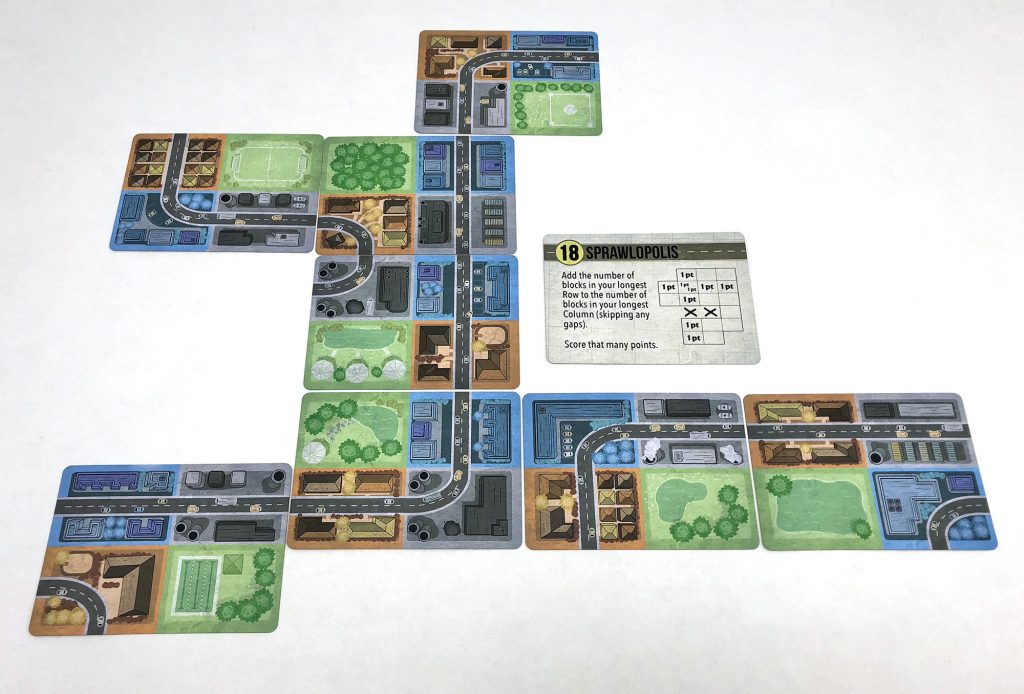 This city is 8 blocks high, and 8 blocks wide which would gain the players 14 points.

Total all your points, subtract points for roads and scoring cards, then subtract that number from the scoring card total. If you meet or exceed that number then you’ve won the game! If not, consider going back to school for a refresher course on civil engineering.

Sprawlopolis is a solid game, with interesting and tricky choices for players to dig into. I enjoy the puzzly aspects; trying to accomplish all the goals only to realize that it’s just not possible. With each card you lay down you take two steps towards one goal, and one step back from another goal. It’s this interplay and balance that lends the game its most appealing characteristic.

Like in Circle the Wagons, Sprawlopolis can force you to make tough choices due to the sometimes diametrically opposing scoring cards. Make as many connected road loops as possible vs having one really long road. Or have two parks connected by roads, but have as few roads as possible. It’s this tension between opposing goals that make Sprawlopolis interesting.

Sprawlopolis takes the mechanisms and scoring options from Circle the Wagons and really creates a new game from them. Making it multiplayer and co-op was a risky proposition given how smoothly it’s predecessor played, but they succeeded.

That’s not to say that Sprawlopolis is perfect. In all the games I played, we didn’t win once. This could be because we’re not great at the game, or because the game might benefit from repeated plays. It might also be that perhaps the scoring values on the cards could come down by a point or two. Some of the card combinations give you lots of points, but also require you to GET those points to win, another interesting tradeoff.

Also, the game is billed as co-op, but it didn’t really feel that way. Again, that could be because of my group, but it felt more like one person playing a card, and then passing cards. There wasn’t a lot of communication other than to say “don’t play on this spot”. Perhaps I’m asking more from an 18 card game than it’s able to give.

There aren’t many designers that I can say that “I like”, Alexander Pfister, Alex J. Kevern, and Rudiger Dorn come to mind. But Steven Aramini and Danny Devine are certainly moving up the list. With their work on Topiary, Circle the Wagons, and the upcoming Coin & Crown they’ve proven their merit as modern designers to look out for.

At $12 shipped, there’s certainly room on your shelf for Sprawlopolis, along with any number of other great games from Button Shy.

Back Sprawlopolis on Kickstarter today!