Shuffle Grand Prix is an interesting foray into the board gaming world from Bicycle’s newish Games by Bicycle division. It feels like a mash up of Mario Kart and Smash Up. If you’re not familiar with those two games, Mario Kart is a racing video game with the ability to attack opponents and Smash Up is a card game where you select two imaginative factions—such as aliens and pirates—and mix them up to form a team to capture bases. In Shuffle Grand Prix, you take two drivers and mix up their ability cards with their varied strengths and race your opponents until there’s no road left to race. The team of drivers which traveled the farthest is the winner.

Despite the weird concept of a race with no true finish line, the game is short and fun, great for a light snack on a board game night. Read on to learn a bit more about the game play; feel free to skip ahead to learn exactly what I think of Shuffle Grand Prix and see if it’s right for you. 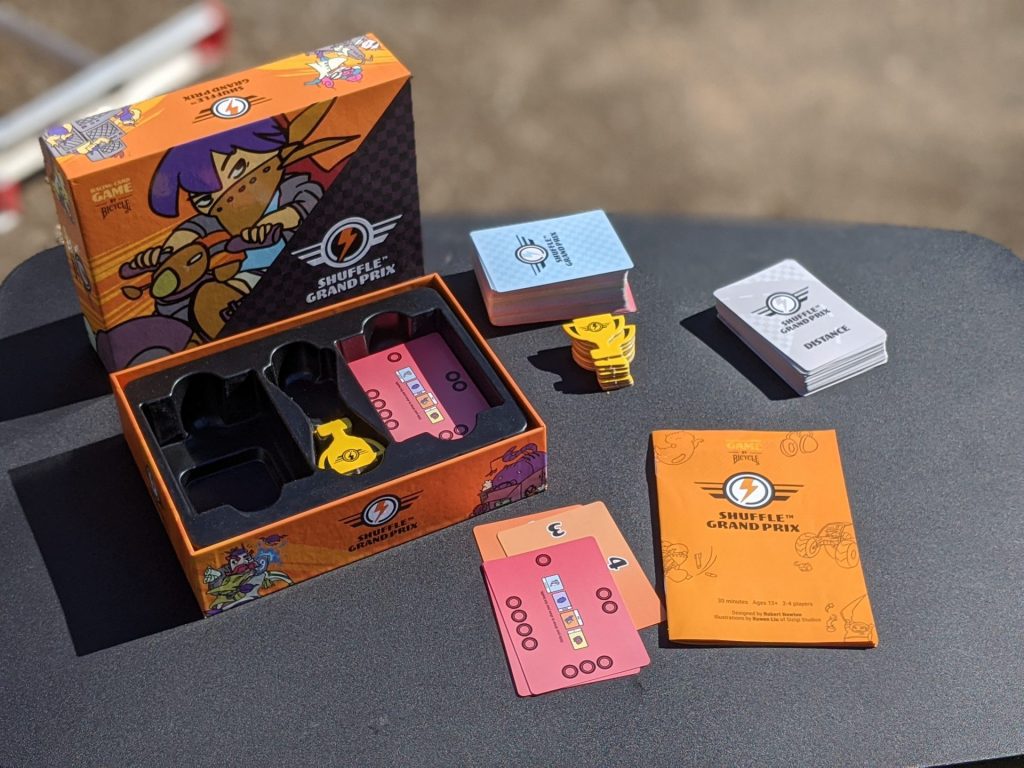 A Bicycle game relies heavily on cards, but there are some trophy tokens here too.

The way to win Shuffle Grand Prix is to travel the farthest distance represented by your collection of distance cards from the distance deck. Collecting valuable distance cards is part luck and part strategy of playing the right combo of ability cards at the opportune time. 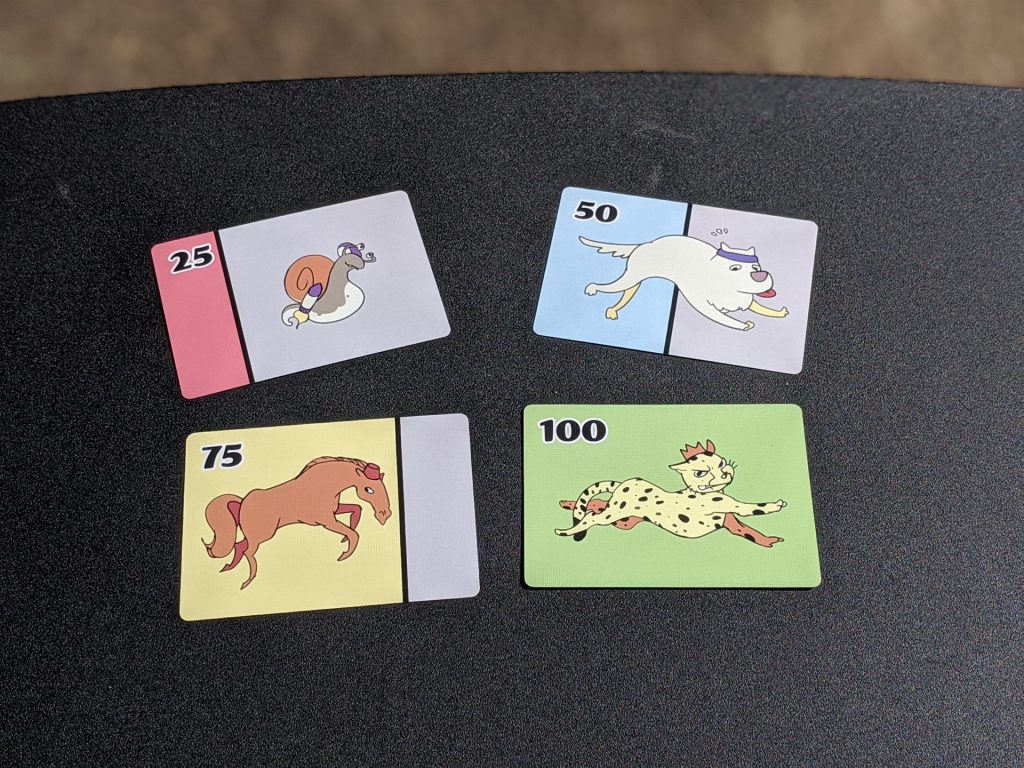 You want to collect a high total of these distance cards to win.

Each player will choose one of their two drivers and place it on the tire health card such that four tires will show. Each time a driver is hit, the player will reposition the driver card to reveal fewer tires to represent its current health. The other driver card is to be placed below the tire card; it isn’t in play yet. They are considered your co-pilot for now. 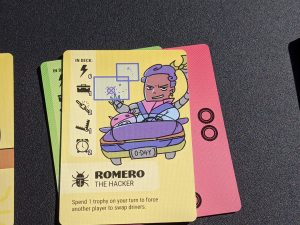 This driver has two tire damage with two tires left. The full tire card with co-pilot underneath.

Each player takes both ability decks and shuffles them together. This will not completely obfuscate them—each ability deck is colored differently, but for a light game, it has minimal impact on play. If you find yourself playing with someone who is shuffling the deck in a manner to obtain a certain card on top…this isn’t a game to play with that person. The ability deck is placed face down next to the driver as a draw pile. Each player draws three cards.

The distance deck is shuffled and play is ready to begin.

The first rule to keep in mind is that you will always hold three ability cards in your hand. Every time you play one, you draw one; if you lose your whole hand, you draw three, and if you draw into four cards, discard immediately. Always.

Each turn, a player will draw a distance card and place it in a line above their deck and driver. Each distance card below 100 has a black bar; players should place subsequent distance cards covering the portion on the right for a quick way to determine overall distance.

Then, if there are any turn trackers in play for that player, they turn them and activate abilities associated with them.

Next, a player may play one ability card. These contain actions, nerfs, traps, and equipment (limit of two per player). A player can also swap an equipped card with one in their hand, but this costs their top distance card. They may also “play” an ability card by discarding it to draw another one. A player may even just pass.

Discards for driver ability cards are placed next to a player and when their draw pile is empty, they shuffle the discard pile. 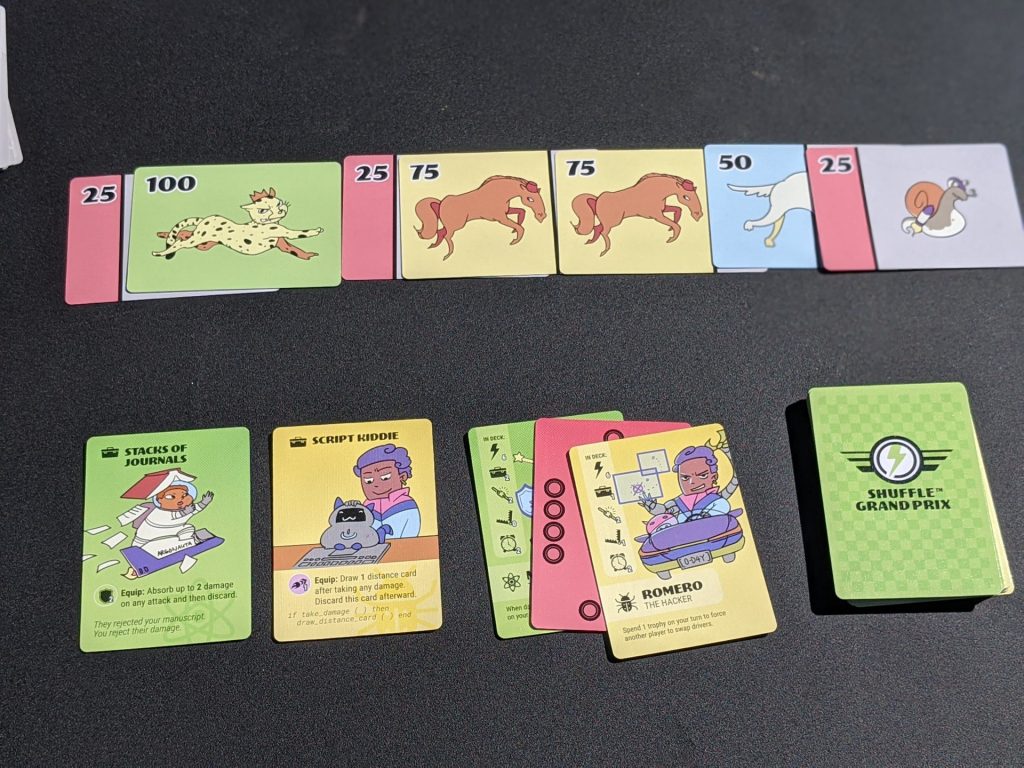 After the one play, a player may spend trophies. One trophy allows a swap of the driver with the co-pilot, two trophies allow you to play an extra ability card.

Players earn trophies by causing any player (including themselves) to spin out.

Spin outs occur anytime a player’s driver takes enough damage to blow out their remaining tire health. When this happens, all equips are discarded, all cards in their hand are discarded (but then draw three to replace!), and their top distance card is discarded. They then swap their driver for their co-pilot and are immune to all actions until their next turn.

Whoever caused the final blow receives a trophy. This can be multiple players receiving a trophy each.

What Do I Think? 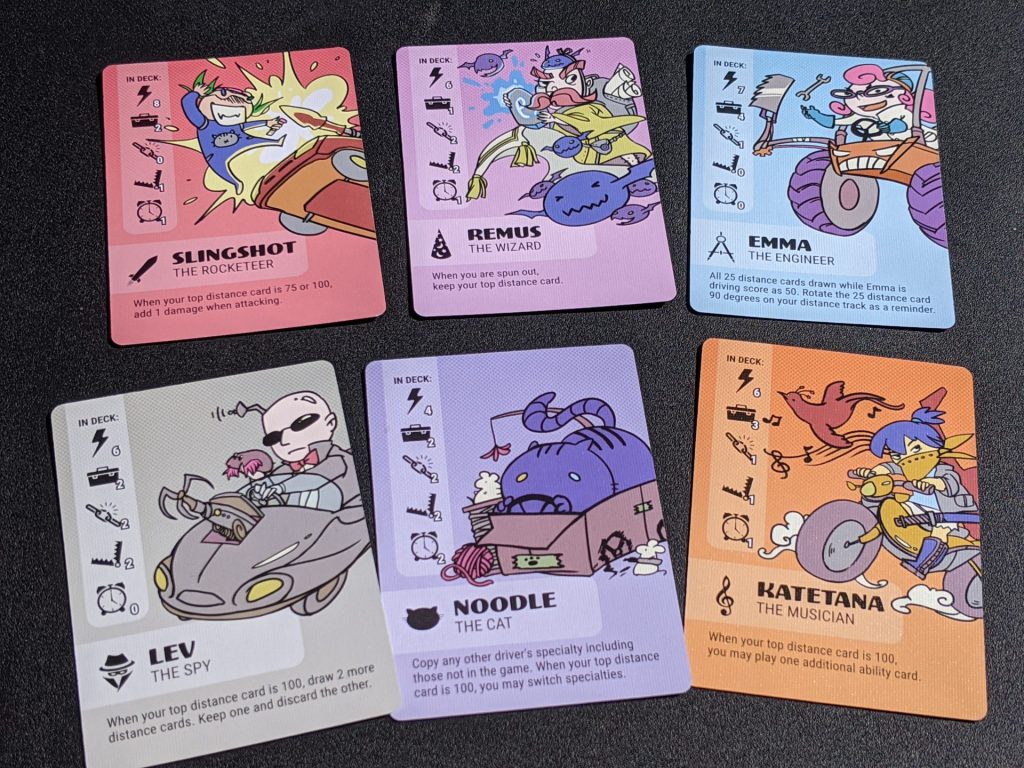 Some of the eight possible drivers.

Shuffle Grand Prix is a surprisingly light and fun game. I think it’s great for people who enjoy games like Magic: The Gathering but have no desire to delve deep into figuring out combos and crafting the perfect decks. It’s also a pretty light alternative to a game like Smash Up. I didn’t enjoy Smash Up in the past, but I enjoyed this in comparison.

At first glance, playing until the distance deck is empty sounds like a long game. In my experience, the combination of abilities, interaction, and fast play of each turn makes it go faster than expected. My games were right around 30 minutes as advertised on the box. I’m not a big fan of laying all those distance cards in a line…you can’t really use one line on a reasonable table. But laying them out in multiple lines works just fine.

I’m also not a big fan of the artwork and design. It’s well done and functional, but I would describe the color choices as a dreary Easter palette.

The drivers are cookie cutter stereotypes and not particularly memorable. There’s no story or lore behind the drivers, just names with puns and referential jokes that can be funny. I was delightfully surprised with a couple of Rocket League references with driver, Slingshot the Rocketeer. With 8 drivers and 100+ cards, you’re bound to find at least one reference or joke that you like. That doesn’t seem like enough to sing its praises though. 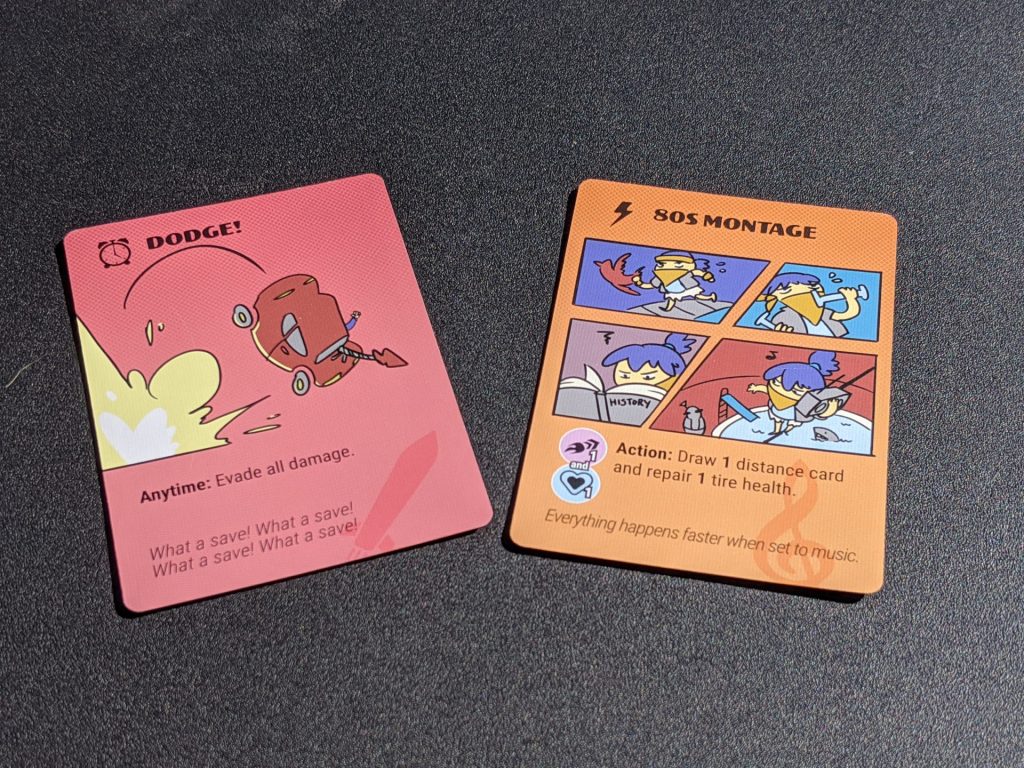 Do you recognize these cultural references?

If you can look past the lack of high luster licensing and artwork, you will find yourself playing an aggressive battle kart endurance race. If that sounds like fun and you want to add to your gaming library, I recommend finding a copy of Shuffle Grand Prix on sale.