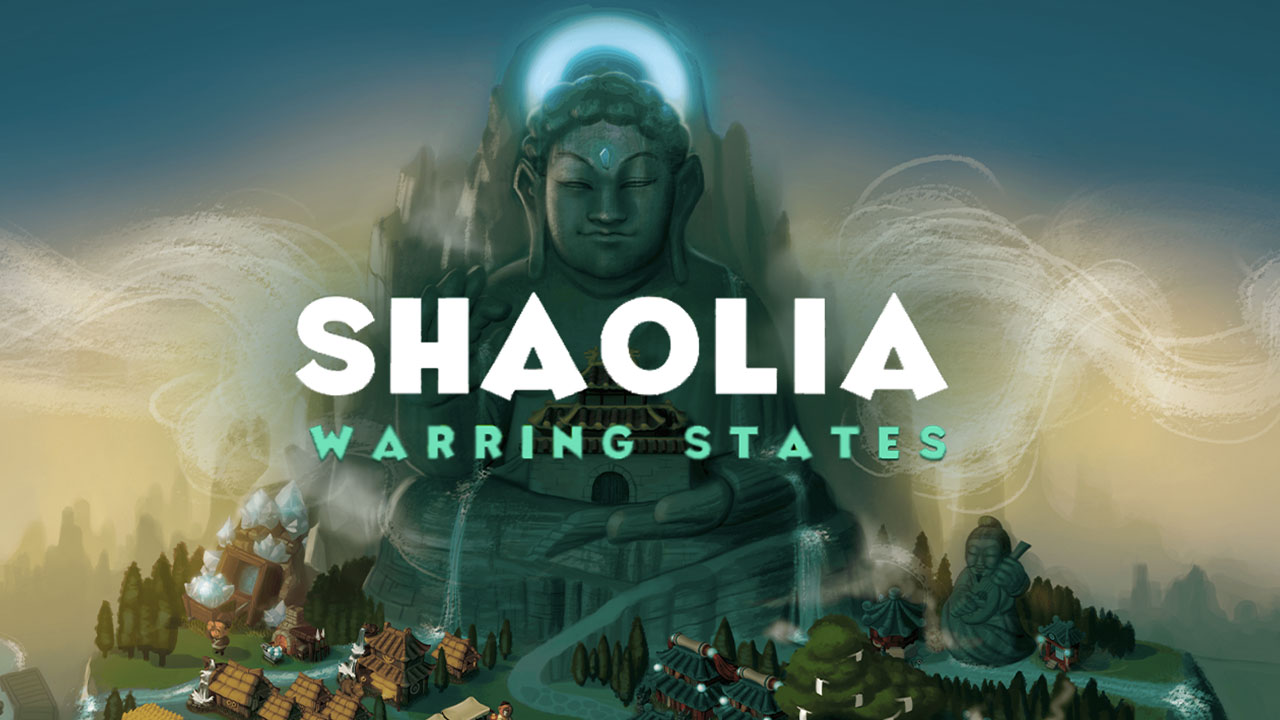 Have you ever played Machi Koro and wondered if it could be a little more...fighty? You’re in luck! Read Ian’s review of Shaolia: Warring States from Bad Comet Games to learn more about this build-and-battle game.

Shaolia: Warring States (which I’ll simply call Shaolia for this review) is a fast-paced build-and-battle title from Bad Comet Games. Players assemble their forces by placing cards in their tableau and rolling dice to activate those cards’ abilities. The structure might feel familiar from titles like Machi Koro, but Shaolia takes that game’s sedate and solitary gameplay and tramples it with all the force of a rampaging war elephant. Don’t let the dice fool you: Shaolia owes as much to the card-comboing duels of Magic: The Gathering or Keyforge as it does Machi Koro.

Originally Kickstarted in July of 2019, Shaolia is coming back to Kickstarter for a second print run as well as an expansion. If you missed it the first time around, now’s your chance to learn how to battle like a boss.

While Shaolia has a variety of unique scenarios that alter the game slightly, setup is generally the same. Each player receives their own player board. The player board has the player’s Palace in the bottom left, a culture track along the bottom, and 8 building spaces on the main part of the board. This is where they’ll build the engines of commerce, culture, and war that will hopefully carry them to victory. In most scenarios, the players also get a handful of coins and 2 secret character cards — the only hidden information for players in the game.

Every round sees the players alternating their way through the three phases: Purchase, Building, and Action. Each phase is carried out by the players in turn order before moving on to the next phase. At the end of a round, the next player takes the first player token and the game continues until there’s a clear victor.

The Purchase phase is up first. Here’s where players will turn their coins into the things they’ll need most for battle. That usually means cards, which can be built on the player board in the next phase, but can also mean extra dice or die-modifying Officers for the Action phase.

Each coin spent lets a player draw a Level 1 card from the top of the deck. These are the staple cards, the gears that get the engine started. They’re relatively cheap to play and give small boosts when they’re activated: a few gold here, a point of damage there.

The Level 2 cards, available in a limited market, are much flashier but cost significantly more. Just acquiring one requires discarding 3 Level 1 cards, and building it usually involves a sizable investment of coins and/or minerals (another type of currency). Some can only be built if the player has certain prerequisite cards already in play.

Now that everybody’s picked their purchases, it’s time for the Building phase. Each player gets a chance to place their card(s) on any open spot of their player board, paying any costs mandated by the card. Cards persist from round to round so managing space can be tricky. If needed, players can discard a previously built card to make room or pay 3 coins to open up one of the two spaces that start locked.

With their buildings erected and armies levied, players proceed to the Action phase. This consists of each player rolling 3 six-sided dice (plus any others purchased for the round) and assigning them to various built cards to activate them. Most built cards have a die value associated with it; match the die to the card to get the card’s effect. Dice are used up for the round in this way and most cards can’t be reactivated in the same round, so it’s important to get a good spread of numbers to mitigate bad luck. Players can also use Officers to raise or lower a roll by a single pip. Each player’s Palace also offers 3 activations that accept any die value, allowing players to get a few coins or Officers in a pinch.

A single round of Shaolia can be whittled down to a few short minutes once players get the hang of things. The core gameplay is simple. It’s the strategic details that make it complex.

There are two ways to win in Shaolia: culture and damage. Culture is accrued through specific buildings like temples whose only purpose is to slowly move the player’s culture track up to 18. Hit that magic number and it’s a well-earned win. Damage comes from a variety of armies, be they infantry or catapults, and can be applied to either built cards or directly to the Palace. Deal 12 cumulative damage to the opposing player’s Palace and they’re eliminated.

I’m a sucker for games with multiple win conditions and I love that Shaolia comes with two equally viable paths to victory. Damage is generally more useful: clearing a card from the opponent’s board means facing one less threat as well as gaining a coin or two for the achievement. A focused attack can leave the opponent helpless as their Palace crumbles into dust. On the other hand, culture production can ramp up exponentially and a player who focuses on schools and temples guarded by a few defensive cards can quickly put the game out of reach.

Better yet, players can freely switch between strategies as needed. There’s no hidden information — save the character cards that can be discarded for coins or built to take advantage of powerful special abilities — so adapting to the opponent’s strategy is as much a part of the game as enacting one’s own.

While there’s a fair amount of information to parse, reading the opponent’s board state isn’t difficult at all since most of the cards work in similar and expected ways. That doesn’t mean there’s no opportunity for misdirection. Since Level 1 cards are easily acquired and can be either built or discarded for a Level 2 card, it’s not always straightforward to guess what the opponent’s up to until they begin committing cards. Even then, they might be trying to goad you into playing more of yours before they switch gears entirely. Staying flexible and keeping an eye on what your opponent might do is important, but tarry too long and you’ll find yourself unable to keep up.

If I have one criticism, it’s that each game of Shaolia can feel wildly different. For every tense back-and-forth battle, there’s another 10-minute rout where one player barely got to play after the third turn or a 60-minute slog where neither player really developed a good engine. This isn’t because Shaolia is fundamentally unbalanced. If anything, it’s too finely balanced: there are few knockout blows, which is great when you’re trying to claw your way back in and frustrating when you’re waiting on the other player to just finish the dang game already. It didn’t stop me from enjoying the game on the whole, but for some people that variability may be a problem.

It’s possible that multiplayer games might fix this issue. I never had the chance to try it out with more than 2 players, but I suspect multiplayer is a completely different experience than the standard 1v1 mode. Several of the scenarios in the rulebook are built specifically for 3-4 players, including both team-based and free-for-all options.

While we’re talking about the rulebook, I should mention that it’s one of the cleanest and most accessible rulebooks I’ve seen in quite some time. The rules are laid out in an intuitive order, with full-color graphics and examples on every page.

Only once did I have a rules question I couldn’t immediately solve by flipping to where I’d expect the answer to be. Even in that case, the rule was clear enough to be playable from the cards, so not finding it in the rulebook didn’t prevent me from getting right back into the fray.

The production values on Shaolia are nothing short of exceptional. This is a well-polished, finely-tuned game. I received the Deluxe edition and I cannot stress enough how great it looks on the table. The wooden tokens and metal coins rank up there with some of the great pieces from our Top 6 Irresistibly Touchable Games. 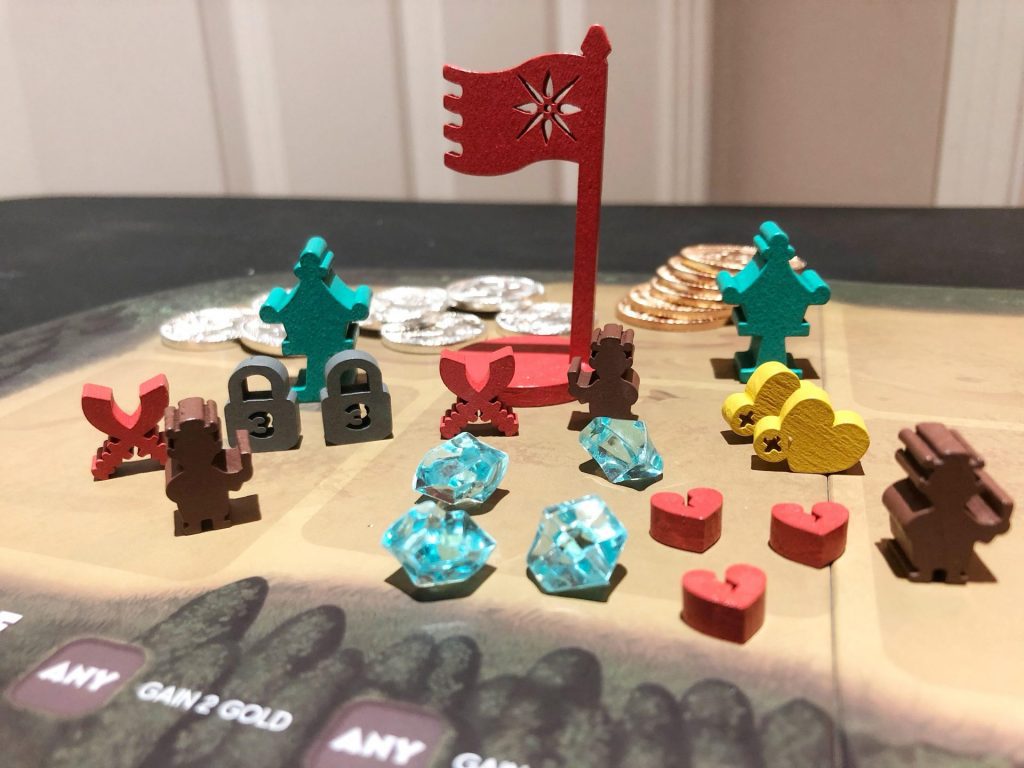 The artwork is deceptively cute as well. The chibi-esque figures remind me especially of the mobile game Clash of Clans, but the pan-Asian flair that permeates the setting makes Shaolia feel unique. While I never quite felt like I was a proud ruler overseeing their lands, there’s a certain joy to be had in looking at a full board and imagining what it would look like in real life.

Shaolia is a fascinating game that mixes the dice-based engine-building of Machi Koro with the strategic depth of Magic: The Gathering, somehow managing to pull it all together in a way that feels unexpected. I can see this being a hugely popular game amongst groups that can play it regularly, teasing out all the best card combos and experimenting with strategies I can’t even imagine. This could occupy hardcore competitors for months, if not years, and with the first expansion going live on Kickstarter today it looks like the world of Shaolia is only going to get bigger and better.

PARKS Review – Over the River and Through the Woods