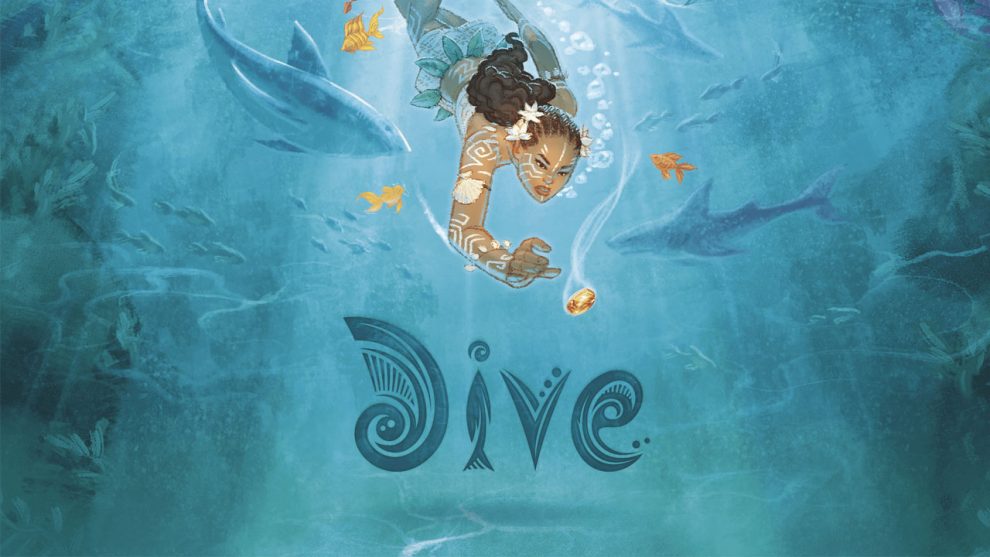 Ian Howard @RealLeafyDragon
Add Comment
Sometimes you get the shark, and sometimes the shark gets you. Read Ian’s review of Dive from Sit Down! Games to see if this push-your-luck game is worth sinking your teeth into.

Ever since I was a kid, I’ve been a big fan of fish. All aquatic creatures, really: no need to exclude jellies, urchins, or coral from the list. There’s something about ocean life in particular that draws me in. Ocean critters are weird, like anglerfish and their bioluminescent lures or sea dragons with their incredible camouflage. While there are plenty of creatures of land and air that make me wonder how they managed to evolve into their unusual forms, the bizarre monstrosities that populate the ocean make me feel like I’ve crash-landed on a completely alien planet. From kelp forests to the midnight zone, nothing is quite as unsettling or as wondrous as Earth’s waters.

Dive, from Sit Down! Games, explores the strange beauty of the ocean by putting players in the role of divers from a mythical island racing to reach a sacred stone. To do that, players will be staring into a stack of transparent cards — each with their own charming oceanic illustration — to determine how far and fast they wish to dive each round. But beware: this ocean is full of giant octopi, slimy eels, and hungry sharks. Keen eyes and shrewd planning will make the difference between hoisting the sacred stone and grabbing a fistful of wet sand.

We See the Undertow

During a game of Dive, each player will be simultaneously planning their descent through the murky waters over a series of rounds. The first to reach the bottom (by scoring 23 points) is the winner. Points are primarily gained by successfully diving past the circling sharks waiting in the water, though players can also score by catching a ride from sea turtles and manta rays along the way.

Each round represents a single dive across 5 levels: the top 5 cards of the Ocean card stack. At the start of the round, each player takes their set of tokens, numbered 1-5, and secretly assigns them to the 5 air bubbles denoted on their player board. These tokens determine whether the diver anticipates a shark at that level (by whether the token shows the shark or non-shark side) as well as set the speed at which the diver will act on each level. If a level has a sea turtle or a manta ray, only the fastest eligible diver at that level will score them. Players may stack multiple tokens on a level if they so choose, allowing them to go faster than their opponents at the cost of missing out on the deeper cards, or they may assign each of their tokens to a successive level to ensure that they dive as deep as possible.

Once everyone has finished planning their dive, players reveal their decisions and begin resolving each of the 5 cards in order. Taking the first card off the stack, players will look to see whether it contains a shark, a sea turtle, a manta ray, or some combination thereof. Next, each player compares their token(s) for that level. If a player anticipated a shark that was not there or did not anticipate a shark that was, their dive ends for the round. If a sea turtle or manta ray is found, the fastest eligible diver — the one with the highest total number for that level — scores the points. Green sea turtles are worth 1 point while red ones are worth 2. Manta rays are not worth a set number of points but instead move that diver along the score track to the current leader’s spot.

Once all 5 cards have been assessed OR all divers have been forced to end the round prematurely, players score 1 point for each successful level they reached. Divers who have already reached the deepest waters (16 points or more) face an extra challenge: they no longer score points for successful levels unless they correctly matched all of the levels.

If a player reaches 23 points, they win at the end of the round; if multiple players reach 23 the winner is the one who scored the highest. Otherwise, the evaluated cards are discarded and a new round begins.

Experienced players can choose an aquatic animal companion at the start of the game, giving them a powerful single-use ability like being able to dive for a 6th card or placing a giant squid on top of the Ocean stack to obscure other players’ view. Players may also add a card-driven AI opponent for a little extra competition in their solo or multiplayer game.

There’s no shortage of games with aquatic themes, and here at Meeple Mountain we’ve reviewed quite a few of them. We’ve rebuilt coral reefs with Open Ocean and the simply-titled Reef. We’ve explored the Great Barrier Reef. We’ve scoured shipwrecks in Deep Blue. We’ve seen sci-fi and fantasy takes on the undersea world with Aquatica, Flotilla, Kingdoms of the Deep, and Tidal Blades: Heroes of the Reef. We even took time out of our Top 6 Alternatives to UNO to dive for Pearls. So how does Dive compare to all of these?

To be honest, Dive isn’t a particularly sophisticated game: it’s got a classic push-your-luck feel in a family-friendly package. It’s short and sweet and doesn’t require much strategy. I’m not sure you could be really good (or bad) at it if you tried. If it wasn’t for the Ocean cards, it might not be worth a second look.

But it does have those Ocean cards, and that makes all the difference. Transparent cards aren’t a new gimmick; they’ve been used to varying degrees of success in games like Gloom, Mystic Vale, and Canvas. Here, though, they are absolutely sublime. This isn’t a game about manipulating transparent cards. It’s a game about looking into the refracted depths of the ocean.

In Dive, the cards are both the medium and the message. Gazing into the Ocean stack and wondering how far away those sharks really are feels so appropriate on every level. And yes, sometimes it’s quite difficult to tell: a few of the cards have large illustrations that obscure what lies below, making it so that you might catch only a shadowy glimpse of a shark’s tail that your opponents missed. Even the mostly-empty cards add a layer of obfuscation, because there’s nothing on the card that you can use as a reference point. My absolute favorites are the cards with holes in them that look like big bubbles blossoming up from the depths, warping your view of what lies beyond. It’s so thematic, that brief moment of disorientation as you try to figure out what your eyes are telling you.

That’s the albatross around Dive’s proverbial neck, of course: Dive asks a lot of its players’ eyes. For people who have vision difficulties, Dive may be nearly impossible to enjoy. The full stack of cards can be a bit dark and hard to see even under optimal circumstances. While the rulebook suggests that players can use a flashlight (provided everyone gets equal access to it) I found that the glare reflecting off the cards made it harder rather than easier. Moving the flashlight around, above, or underneath the stack of cards didn’t help in any meaningful way. Visual acuity and depth perception are the name of the game, so if that doesn’t appeal to you for whatever reason, Dive is just not going to be a good fit.

Despite that, Dive is a great game because it understands what it’s doing, does it well, and then gets out of its own way. It uses its mechanical elements to support its thematic ones, making the experience much more than the sum of its parts. It’s a little uneven around the edges, with some occasionally dull rounds where the plays are all too obvious, but I don’t mind that. I’m too busy jumping in with both feet on the best that Dive has to offer: the rounds when I see the shark you don’t, the times we both speed up to grab a manta ray only to discover it’s another card down, or the moments when a giant octopus surfaces and completely blocks the ocean floor from view.

In my opinion, Dive is a treasure waiting to be found. If your family loves immersive themes and underwater adventures as much as mine does, you need to pick up this pearl of a game. 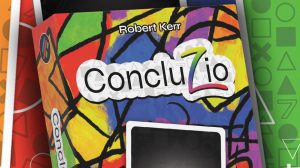 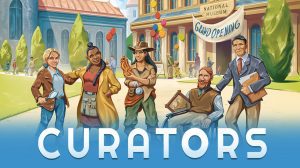 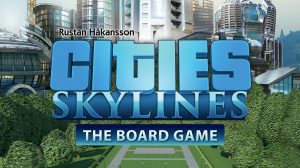 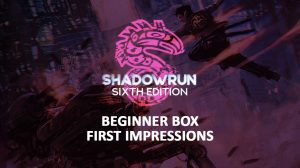 This box promises to give you everything you need to run the shadows in the Sixth World, but does it deliver? Find out in our First Impressions analysis!