Sagrada Review – The Art of Glass Cutting and Dice Rolling

Sagrada, from Adrian Adamescu and Daryl Andrews, and published by Floodgate Games is a dice drafting and dice placement game for 2-4 players which plays over 10 rounds. In Sagrada players will be drafting dice from a common pool, placing dice onto their “work of art in progress”, all the while working towards a number of public (and private) objectives. The player with the most points at the end of the game will be the master craftsman.

How to Set Up Sagrada

Sagrada has some really interesting components: cleverly arranged “window frame” cards, tool cards which allow you to break the rules of the game, and lots of dice…90 of them in fact! 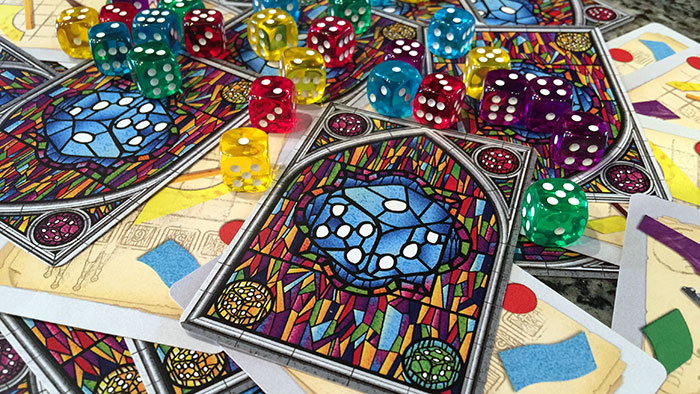 Each player will take one of the double sided window frame cards and select a side. At the bottom right corner of each card are a variable number of white dots. Players will take that number of favor tokens.

Note that some window cards are simpler (fewer dots), while some are much more complicated (more dots). For your first game or two you may want to consider playing with any card which has 3 or 4 favor tokens.

Shuffle the public objective cards and the tool cards separately, then lay out 3 of each and return the rest of the cards to the box.

Choose a starting player and the game can begin.

How to Play Sagrada

In Sagrada, players are attempting to make beautiful works of stained glass art by covering their card with dice in 5 different colors. 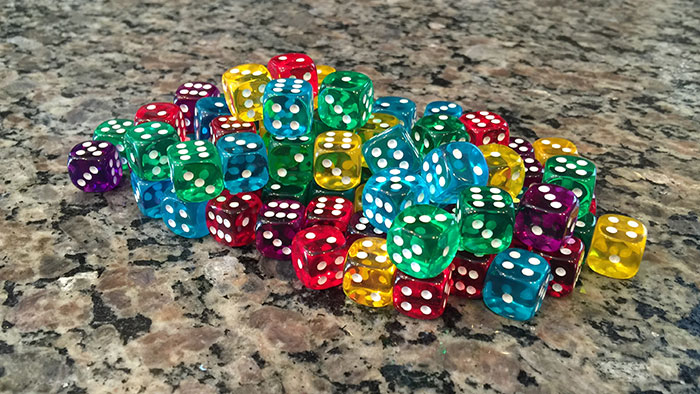 Sagrada uses a mechanism called a snake draft. The first player will select one of the dice and place it onto their window, the next player in clockwise order will pick one, and so on. When turn order gets to the last player, they’ll select two dice. Turn order then reverses and each player will draft 1 more die. Any remaining dice will be placed on to the round tracker.

How to Place Dice in Sagrada

Window cards are divided into 4 rows and 5 columns with each square representing one of 3 different types: 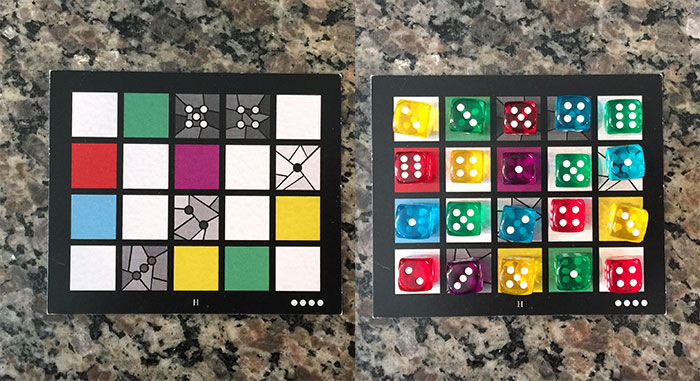 When placing a die, players must not only obey the rules of each square, but must also obey the following rules:

The tool cards in Sagrada allow players to break the rules in various ways. To use a tool card players must pay its cost in favor tokens. The first time a tool is used in a game it’s cost is one favor token. Each subsequent time the cost for that same tool will be one more than the number of favor tokens currently on the card. 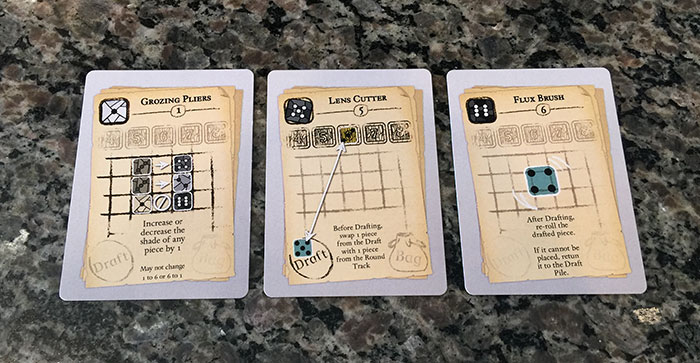 Most tool cards will allow you to adjust the placement location, or die face, of the die you pick. For example, the Grozing Pliers allow you to select a die, and increase or decrease the pip value by one. The Lens Cutter allows you to swap one die from the active pool with another die from the round track. The Flux Brush allows you to select a die, and then reroll it in hopes of getting a different pip value. Though you must return the die if you can’t place it…so watch out!

The reason you’re placing these dice and following all of these rules is to gain points…that and the chance to gloat in your victory of course.

At the end of the game, you’ll receive points for matching the dice on your window to the public and private objective cards. Let’s take a look at them. 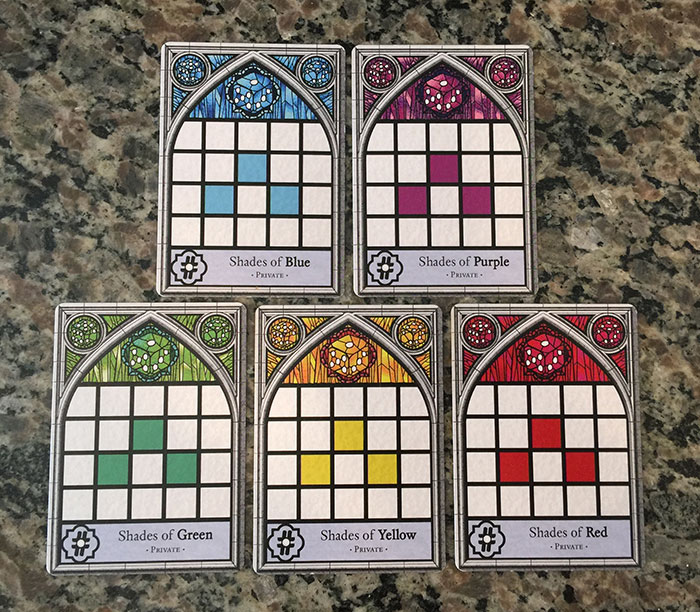 The public objective are shared with, and may be scored by, all players. They vary in difficulty and in corresponding point value. The Medium Shades objective rewards players with 2 points for each set of 3 and 4 contained on their card at the end of the game. The Row Color Variety card gives players a sizeable 6 point bonus for each row that does not contain any duplicated colors. Lastly the Shade Variety card gives players 5 points for each unique set of dice numbered 1-6. 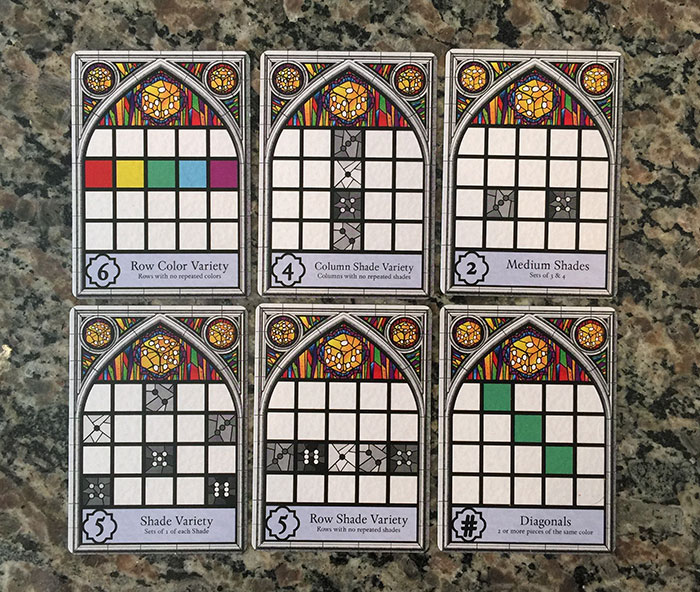 Note that almost all of the objective cards, both private and public, are available to be scored multiple times. That certainly doesn’t mean it’ll be easy, though. 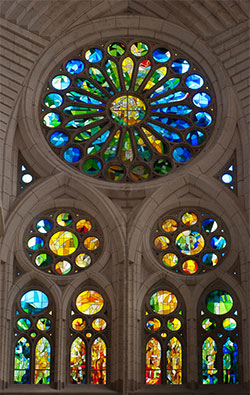 The Sagrada Família cathedral in Barcelona Spain, where this game takes it’s name from, boasts some of the world’s most beautiful stained glass windows. While this game can’t replicate those works of art, it can at least pay homage to them with the theme.

The cover art mimics one of the larger pieces in the cathedral with it’s glowing oranges and yellows. The window frame cards require players to place these beautiful crystal dice into pleasing arrangements. The tool cards familiarize players with the implements that craftsmen would use to create these masterpieces.

Sagrada plays pretty quickly once you’re familiar with its gameplay. The 20-40 minute time limit is accurate. The gameplay is challenging and thinky, often requiring players to rearrange their strategy on the fly due to the vagaries of the dice pool or the use of a tool card by another player. 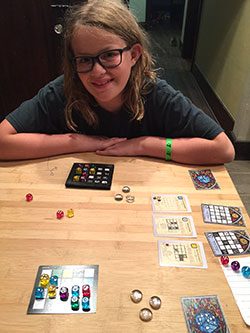 I love that I’ve never won a game of Sagrada. I’ve played my 10yo daughter twice and she’s beaten me both times. I commented on Twitter the other day that “I always enjoy winning a game on my first try.” to which my friend Daniel replied “Sometimes it can turn me off from a game, actually. I like having something to discover, and if I win the first time it feels solved“. Sagrada is definitely a game that you’re not guaranteed to win; and that’s a good thing.

What I Dislike About Sagrada

I have a preview copy so I can’t “dislike” any of the components. Instead I’ll focus on the gameplay. Sagrada is fairly challenging mentally. There’s lots of things to think about, from color, to number, to arrangement, and it can be easy to miss something without realizing it. The provided tool cards can help quite a bit, but since you’re only playing with 3 of them at a time you’re never sure if you’ll have the one you need.

In our first play through, my daughter and I noticed a number of things that weren’t explained well, or were challenging graphically. I reported those to Floodgate Games who responded positively with changes and/or clarification. I anticipate these to be explained more clearly in the final product.

Sagrada is a beautiful game to look at, even just with the preview copy I have. Fans of thinky, puzzly, pattern arranging games such as Blueprints, Blokus, Rolling America, Qwixx, or Rush Hour will love the challenges. Fan of dice rolling will go nuts over the bag full of dice.

If you’re looking for a beautiful, family friendly game that will make you use your noodle, then make sure you back Sagrada on Kickstarter!

What do you think about Sagrada? Give us your opinions about what you like and/or dislike about the game in the comments below! Also, if you enjoy dice drafting games, be sure to check out our review of Blueprints!