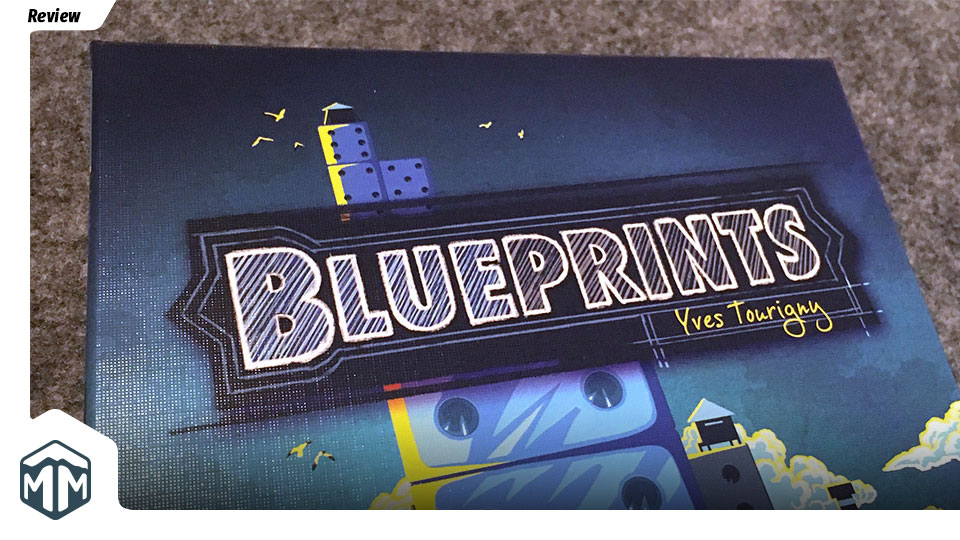 There are few things as satisfying as building something completely from scratch. When I can look at whatever I’ve built and say, “Wow, I built that on my own.” I tend to feel a sense of pride in knowing that I made that. I’ve found that I often lean toward games that give this same feeling. Generally, most games build upon something whether it be a tableau of cards or a presence of armies on a board, but there is something different about building a city or structure that is much more visual and satisfying. 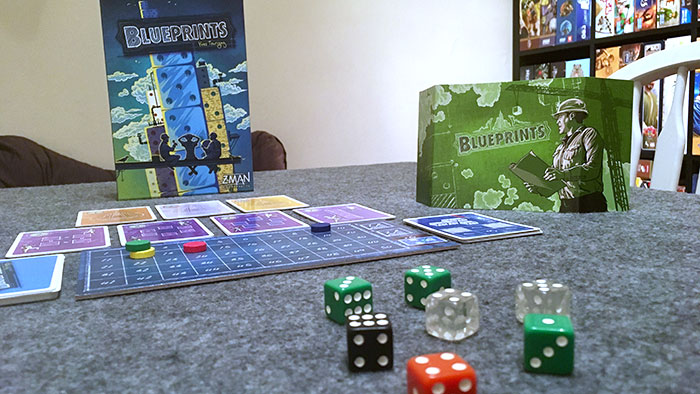 Blueprints is a design from Yves Tourigny in which 2-4 players each try to build the most exciting structures to score the most points over the course of three rounds. Each player receives a blueprint card which shows a specific building that can be built to achieve a set amount of bonus points. In addition, each player can strive toward completing different prize cards that give even more points. At the end of each round all player’s buildings are scored, the prizes are given out, and a new round begins. After the third round, whoever has the most points is declared the winner.

Blueprints one of the few games that is light in complexity, comes in a small box, and also has the “building satisfaction” that I talked about earlier. In addition to all of that, it is able to use dice in a way that allows randomness but does not punish players for it. I love dice, but few games are able to balance luck and skill once dice are introduced. 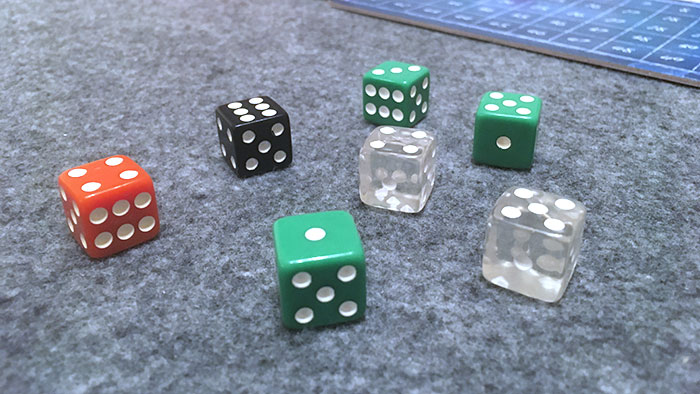 During a player’s turn, he or she simply takes three set actions in order.

Seriously, that’s it. Each player gets to do that 6 times and then the round is over. Really there are only a few rules in the game to learn and they all have to do with the dice placement. First, when placing a die, the pip value must be the same or higher than the one below it. Second, once a die is placed it cannot be moved. Both of these rules are simple but lead to some great decisions throughout the course of a round. 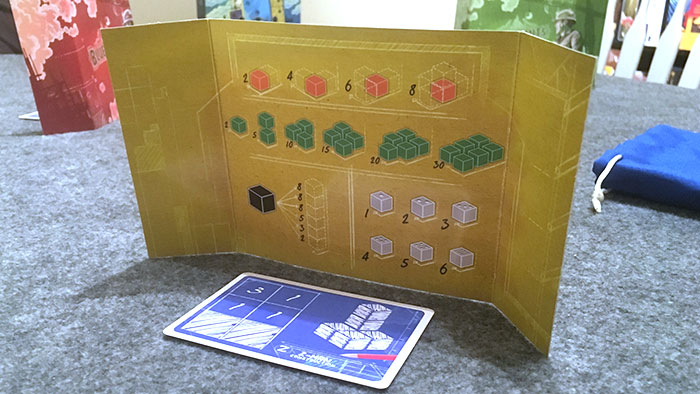 So how do you score points?

This is where the game starts to shine. Players get points for completing prize cards and by gaining awards cards for having the highest valued structure. There are four prize cards that will be fought over throughout the game: building a structure five dice high, having four of a kind in pips in the structure, having pips one through six in the structure, and having five or more dice of the same color. At the end of each round the player who fulfills the requirements for each will be given the prize and its points. All ties are broken by whoever has the most of the rounds “in demand” dice chosen at random every round. 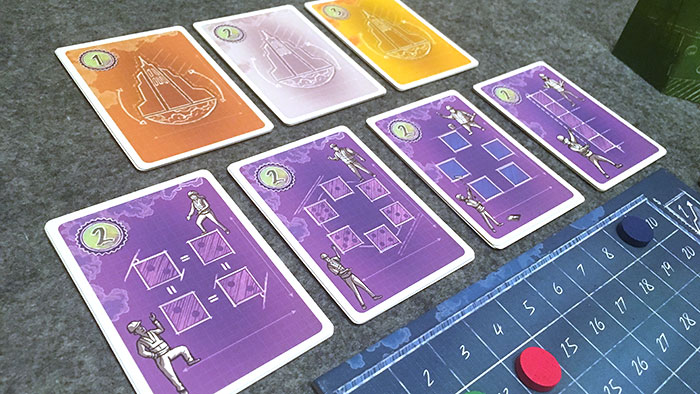 The really unique aspect of this game comes into play with the scoring of each player’s buildings. This is where the game really shines. Each die represents one of four materials: clear represents glass, orange represents wood, black represents stone, and green represents recycled material. Each one of these material types scores differently at the end of the round. All of the points from each material are added up to form the structure’s value. At the end of each round whoever has the first, second, and third highest values (in a four player game) will get the corresponding award and points.

How do the dice score? 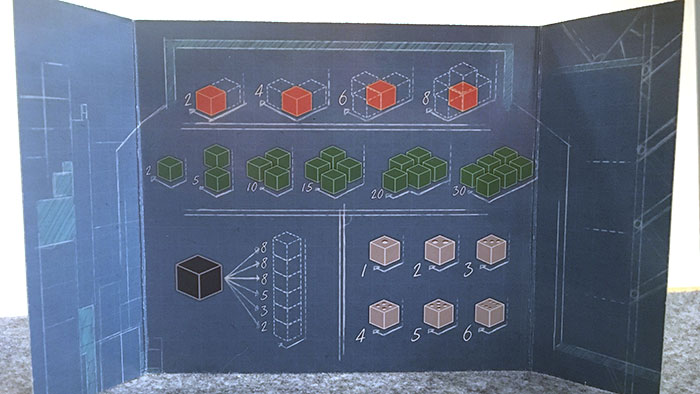 Glass (clear dice) are the most straightforward to score. Each individual die is worth the value of the pips that are facing up. All of these are added together for the glass score.

Wood (orange dice) are scored by gaining two points for each die adjacent (including above and below) to the orange die being scored. This can be tricky since scoring multiple orange dice can often overlap. All orange dice points are added up for the total wood score.

Stone (black dice) are scored differently based on the level of the building they were placed on. A stone dice on the first floor is worth two points, three on the second floor, five on the third floor, and eight on the fourth/fifth/sixth floors. Again, all black dice points are added to create the total stone score.

Recycled materials (green dice) are scored based on the total number of green dice you have in your structure. Unlike the first three materials, each die does not score individually. Instead, players score 2/5/10/15/20/30 for having a total of 1/2/3/4/5/6 green dice in his or her building.

Blueprints offers just enough strategy and interesting decisions to make it stand well on its own without becoming too complicated. One of the main decisions you will have every turn is which dice to pick from the random pool (8/9/7 dice for 2/3/4 players.) Do you risk it and try to get six glass in hopes for the prize card or do you play it safe and go for all of the green dice? Some players will go all in on one resource or for one prize card while others may try to diversify their selections in order to get a spread of different points. There really isn’t a right or wrong answer as I’ve seen both strategies do well. 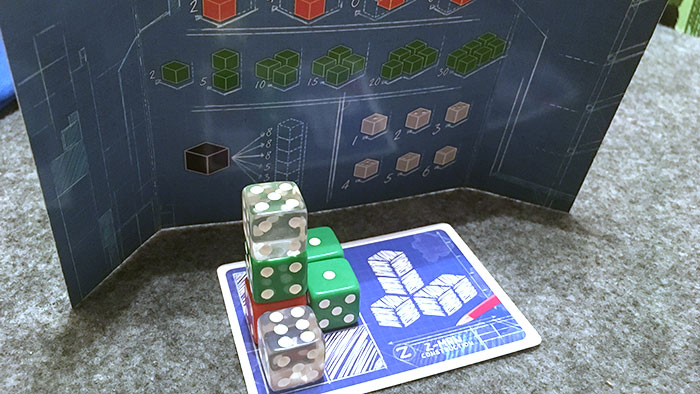 There is certainly room to block players by taking the dice you think they need. This can be great if you have kept track of what everyone has taken up to that point but it will not work for everyone. Since each player has a privacy screen, you may not know exactly what resources your opponents are hoping for if you haven’t been paying close attention. The two player game allows for much more blocking than the three or four player games do. With two players each time a player takes dice from the pool they select one to keep and one to put back in the bag. This gives the game much more of a back and forth feel which I quite enjoyed. 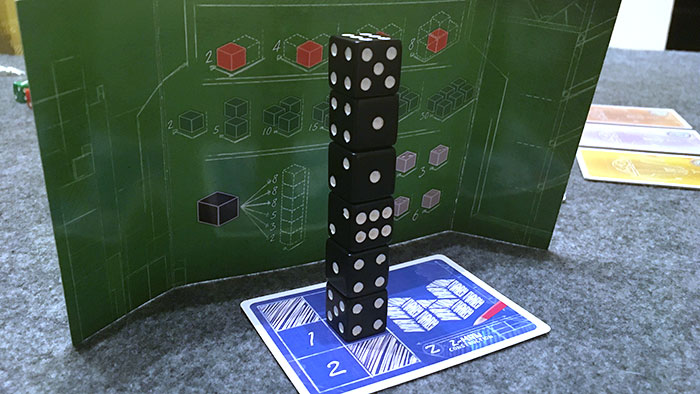 My personal favorite strategy is to build a vertical tower of black dice in order from 1-6. It’s extremely risky, but it can have a huge payoff. This does bring up one interesting note in terms of the direction players build their towers. As I mentioned before each player receives a blueprint card at the beginning of each round. These cards have different designs for each player’s potential structure. What makes these interesting is that they are not required to be built, but give a decent amount of bonus points towards the building’s value which strongly encourages you to build them. In the case of my favorite strategy, you can gain more points by getting away from the blueprint.

For such a small and affordable game, Blueprints looks and feels great. None of the components particularly stand out as extraordinary, but they all get the job done and do it well. The dice come in a nice blue drawstring bag that feels pretty sturdy unlike many games and the dice themselves feel very uniform and vibrant. The one piece that may not be the most sturdy would be the privacy screens. While they don’t feel like they are too flimsy, they aren’t very thick at all. I can let this one slide since it is such a small boxed game. 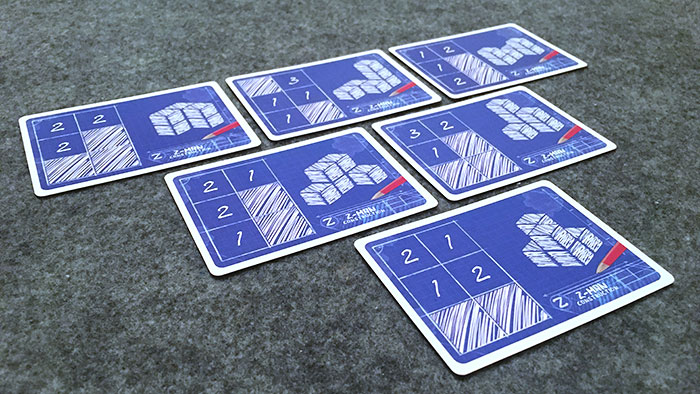 The art in Blueprints fits the theme very well. I enjoyed how the blueprint cards actually are drawn in a style that looks like actual blueprints. All of the various components and cards hold the theme in the art very strongly throughout. I particularly enjoyed the art on the player screens. The back is fully covered by the game’s logo and some corresponding artwork while the inside has a very useful and well-designed scoring reference. Even the box art joins the building theme with the use of dice to make a great eye catching cover. All in all, I really enjoyed the art style.

Blueprints fits a mold that a lot of non-card games have a hard time filling. It is a light game that goes by quickly, yet still has innovative mechanics and interesting decisions that can be made. Its use of art and theme helps the player connect the dots of mechanics and gameplay very quickly which means it is remarkably easy to teach to new players. In addition, it engages the “builder’s satisfaction” which helps players who are not in the lead to stay engaged and still feel good about what they have built. The game also manages dice very well in that the dice rolls themselves are not used to determine anyone’s moves, but instead the players must pick them strategically based on what has been rolled. 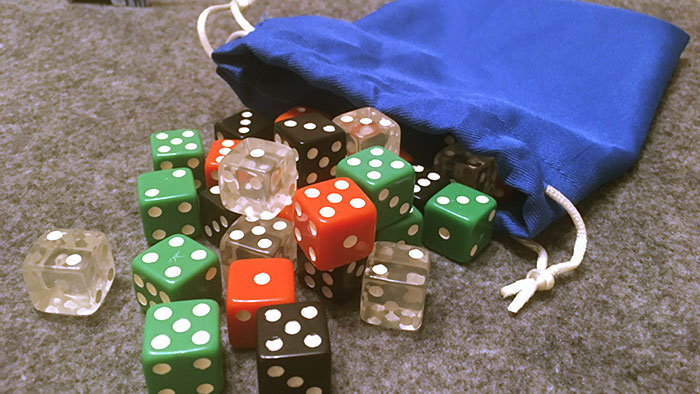 All in all, I do not have many complaints about Blueprints. It’s a quick and easy filler game so I don’t mind overlooking some small flaws. One of the few things I did notice, though, was the lack of variation in prize cards. With only four distinct prizes, it can feel slightly repetitive to build toward the same goals each round. I would have loved to see a deck of different goal cards with more options that could be randomly chosen each round.

Other than that one note, I really enjoyed the game. It’s become a staple filler in my collection and I know that it will continue to hit the table. I’d love to see a small expansion that could add more prize cards and maybe even a new material die type, but even as the game stands I am content with its gameplay.

Blueprints definitely gets my recommendation!