Rolling America Review – Visit America One Roll at a Time

Rolling America includes a pad of scoring sheets and 7 beautifully vivid custom dice with stars for pips (AMERICA!). The scoring sheets feature a funky pixelated version of the United States divided into 6 colored areas (orange blue, green, yellow, red, and purple), each subdivided into between 6 and 10 sections. The box is heavy duty and includes a fun magnetic flap to keep it securely closed. 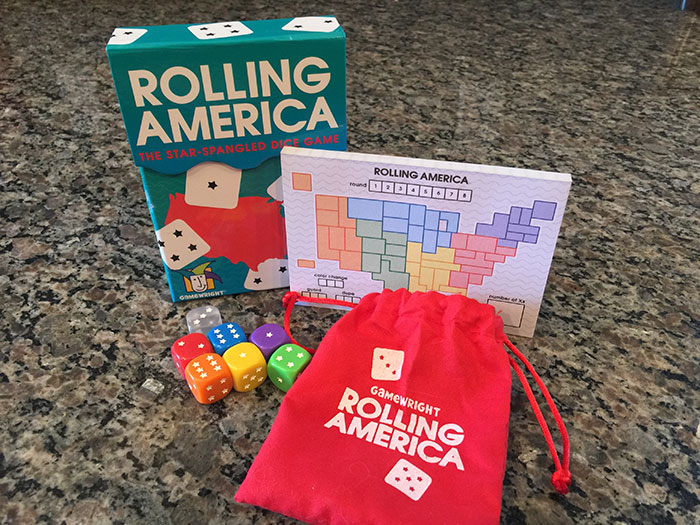 Players take turns pulling two dice from the red satin bag and rolling them. All players must write the pip value of each die somewhere in the matching colored area on their scoring sheet: ie. a Red 4 must be written somewhere in the red area of the map. When there are 6 dice on the table, all dice are returned to the bag and the next round begins. After eight rounds the game is over and scoring takes place.

Sounds pretty easy so far, right? Wrong. This is where Rolling America starts to get…complicated. In addition to the color placement rule, there’s also a “neighboring state rule” which allows players to write down a number only if all of the sections immediately touching it are within 1 digit, or are the same number. Want to write something next to that green 6? Better hope for a blue 5 or 6.

Lest you despair, Rolling America offers several ways to help players mitigate the randomness of the dice. One of the seven dice is clear and acts as a wild color. Additionally, players have 3 special abilities. Guarding allows players to ignore the neighboring state rule for a specific section of the scoring sheet. This allows a player to write in any number they like and not have to worry whether it’s within 1 digit. Color changing lets players convert a colored dice to any other color, preserving the pip value (turning a purple 6 to a yellow 6, for instance). Lastly, Duplication allows you to take any die and copy it. That means that you’d be writing down 3 numbers on that turn. 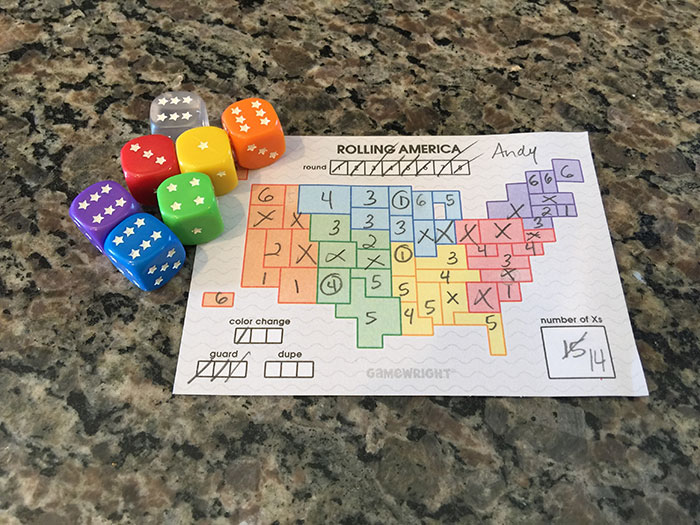 If at any point a player must write down a number and can’t, or won’t, they must write an X into one section of the colored area corresponding to the die they’re having trouble with. At the end of the game, the player with the fewest X’s marked on the scoring sheet is the winner.

Roll and write games have a rich and lengthy history, going at least as far back as Yahtzee. There are dozens upon dozens of different variations but generally they all share the same characteristics: roll some dice and write the results down on a score sheet. Rolling America is a classic example: easy to play, easy to teach, but with some really tough choices. Putting a 1 or a 6 anywhere in the middle of the board is asking for trouble. Do you save your Guard ability for later when the going gets really tough, or do you use it early to avoid an X? When is a good time to Duplicate a good roll of the dice? Since only 6 dice are used each round, AND you never know what pip value they’ll be, do you try to plan for a specific color and pip combination or do you take an organic approach and put things where they fit in the moment?

Let’s be honest, this isn’t a deep game, but it’s light, fast, portable (just barely bigger than a deck of cards), and plays with an essentially unlimited number of people. The dice are large, high quality, and with those stars you can’t help but feel patriotic! Rolling America is a no brainer to have in your collection…especially with the $10 average price tag. You can even find this one in Target! Go get it, and have fun rolling dice with your family and friends! 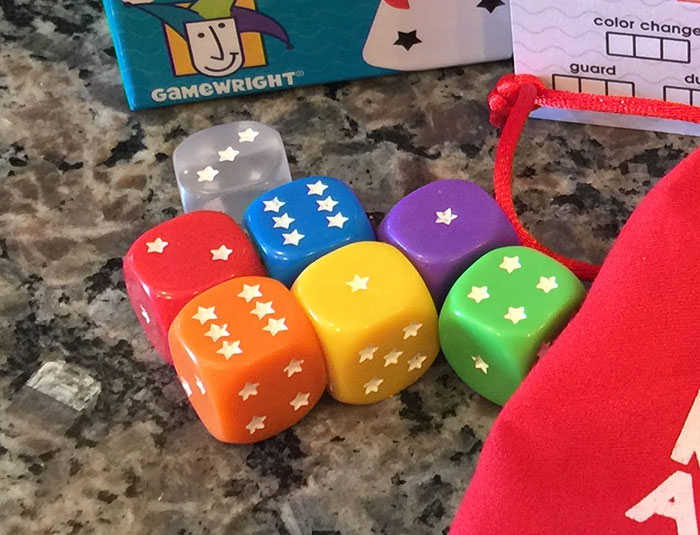 What do you think about Rolling America, or roll and write games in general? Give us your opinions about what you like and/or dislike about the game in the comments below!