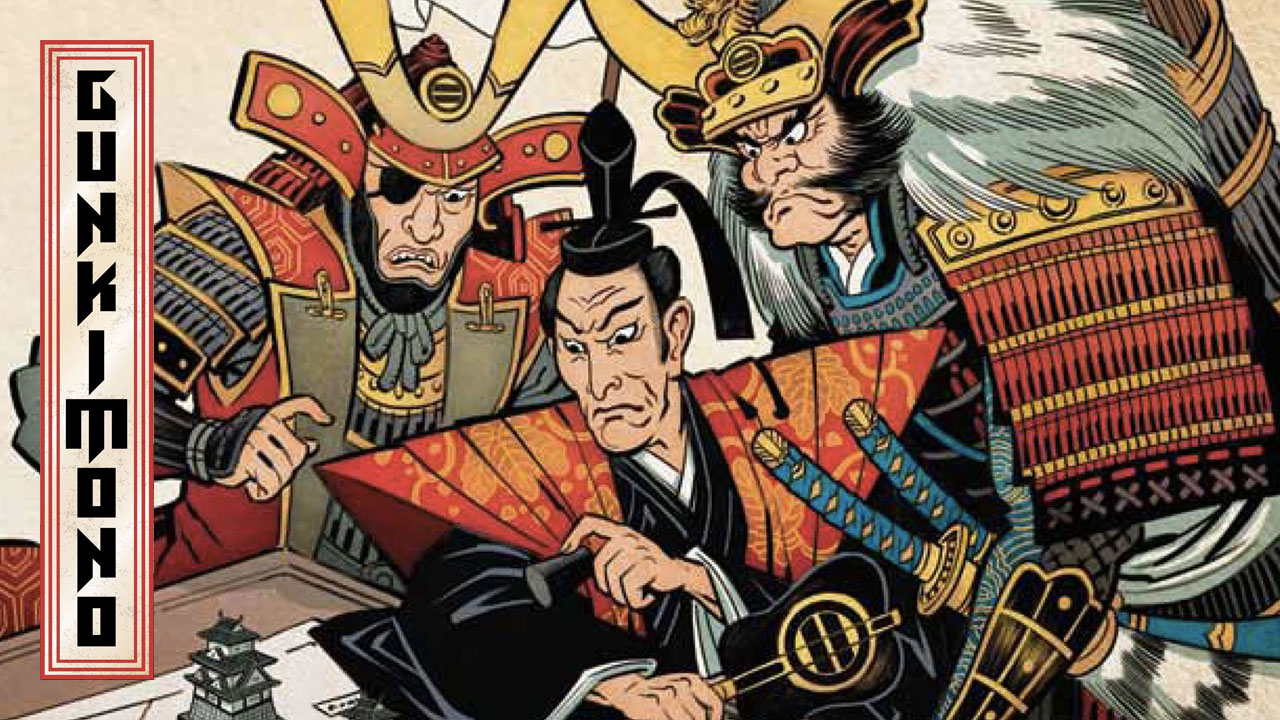 As the fog began to clear, the cries of seagulls could be heard overhead. Shogun Kiyohide thanked Hachiman, the god of war, for the cool breezes that would refresh his men as they prepared for battle. HIs daimyos gathered around him awaiting their orders, while their troops awaited in ranks nearby; swords, spears, and arrow tips glinting in the morning sun.

Kiyohide had planned almost two full months for this day; his network of spies and informants providing him with a stream of information of the enemy movements. Today was the day that he would crush the opposition and cover himself and his men with glory. Now he simply needed to execute his plan to seize the victory he deserved.

He called down the blessings of the seven lucky gods over his loyal lieutenants and gave them their final orders. As they walked back to their men the Shogun turned to survey the field; a smile on his face. Today would be the day…he could feel it in his bones. If only the enemy would cooperate.

Meanwhile on the opposite side of Shogun Masamori gathered his army…

The Art of War, an Overview of Gunkimono

In Gunkimono players take on the role of Shogun, sending their troops out to the field of battle to oppose the enemy. As players place their double ended tiles on the board (each composed of a combination of infantry, archers, spearmen, cavalry, and samurai) they will be able to choose victory points, honor points, or a mix of the two based on the resulting groupings. They must carefully balance their choices as selecting one of the other at the wrong time could result in a benefit to their opponents.

As honor points accrue within each segment of your military forces, players will be given the opportunity to construct strongholds. They must choose wisely as they’ll earn victory points at the end of every turn based on their placement. If they continue to cover one force in glory, valuable war banners can be earned…at the expense of pushing those troops too hard and exhausting them for the remainder of the game. Once the game ending tile has been drawn, players reveal their bonuses, update the scoreboard accordingly and the victor is announced. 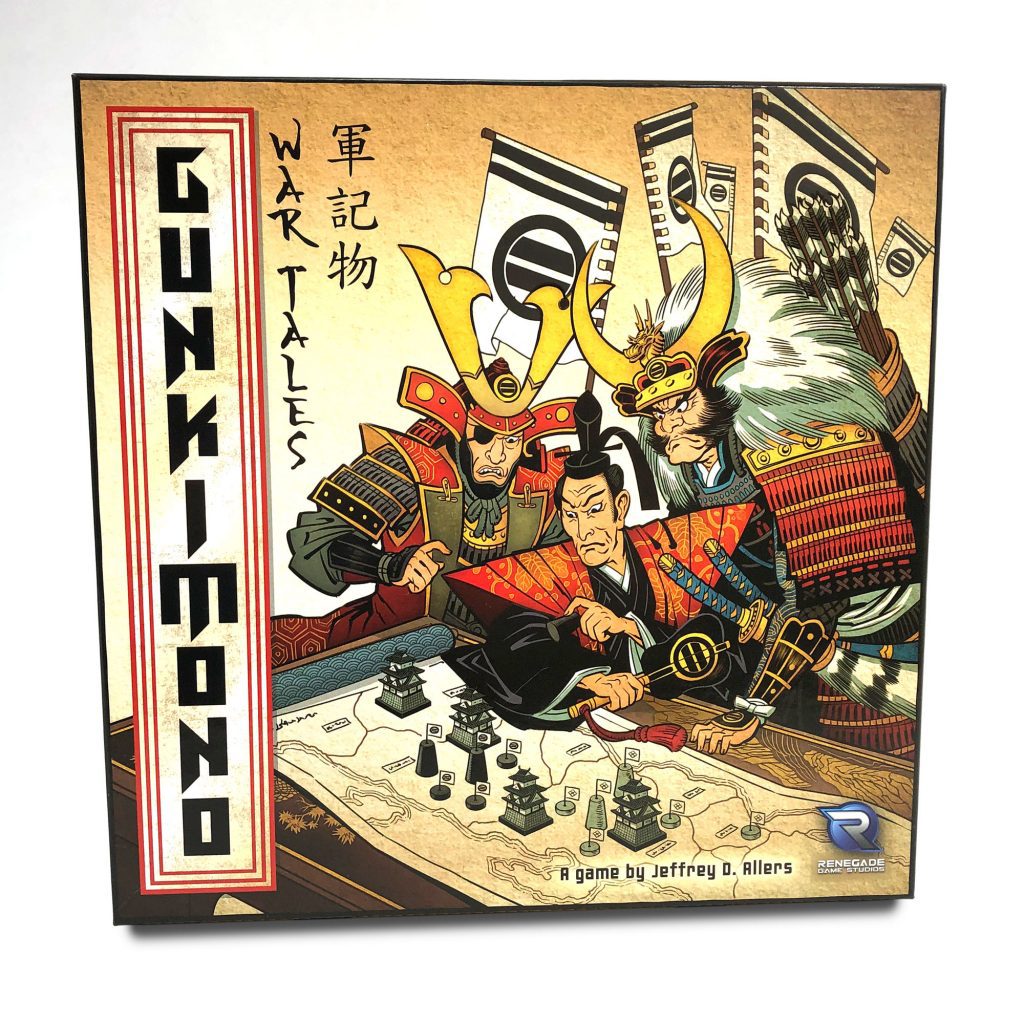 Shuffle the large double ended army tiles then remove a certain number based on player count.

Deal a hand of 3 large army tiles to each player.

Place three large army tiles face up, to be used as the draw pile.

Draw 5 large army tiles randomly. Mix the game-ending Gunkimono tile among those 5, place the 5+1 tile atop that, and set that stack aside. 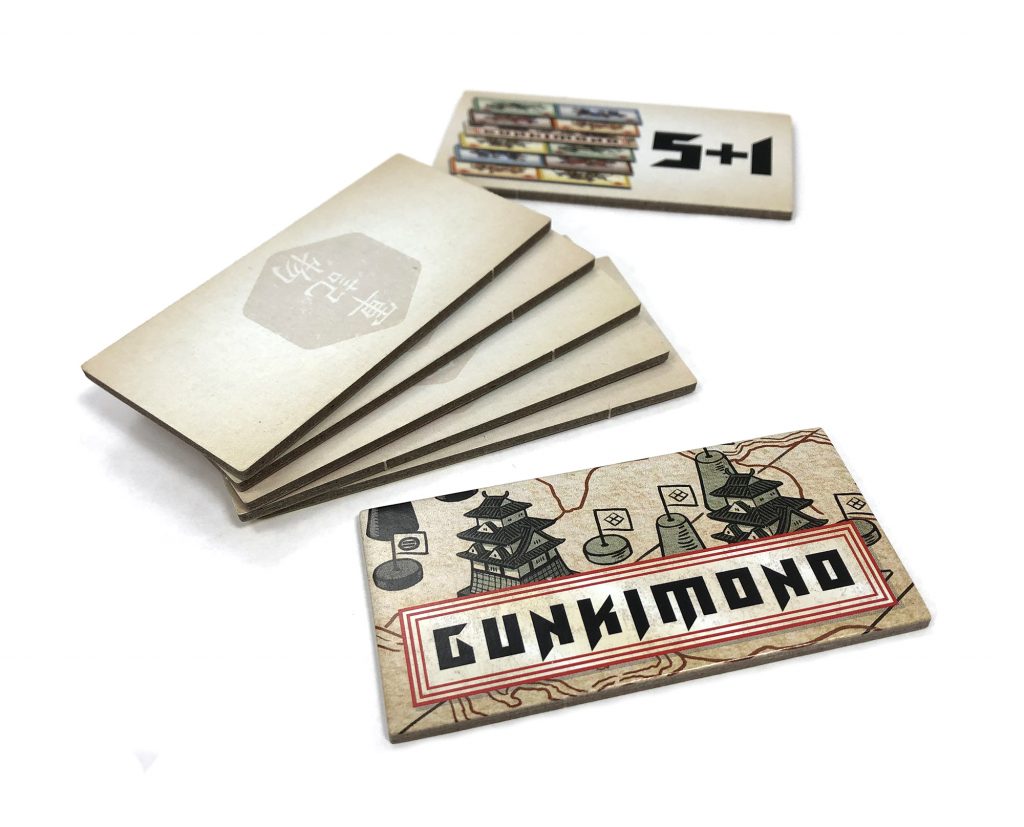 Place the remainder of the large army tiles nearby to be used to replenish the draw pile.

Each player selects a color and takes their color’s large score tile, all matching wooden pieces, and a set of 5 small square army tiles (one each of blue, green, yellow, orange, and brown). 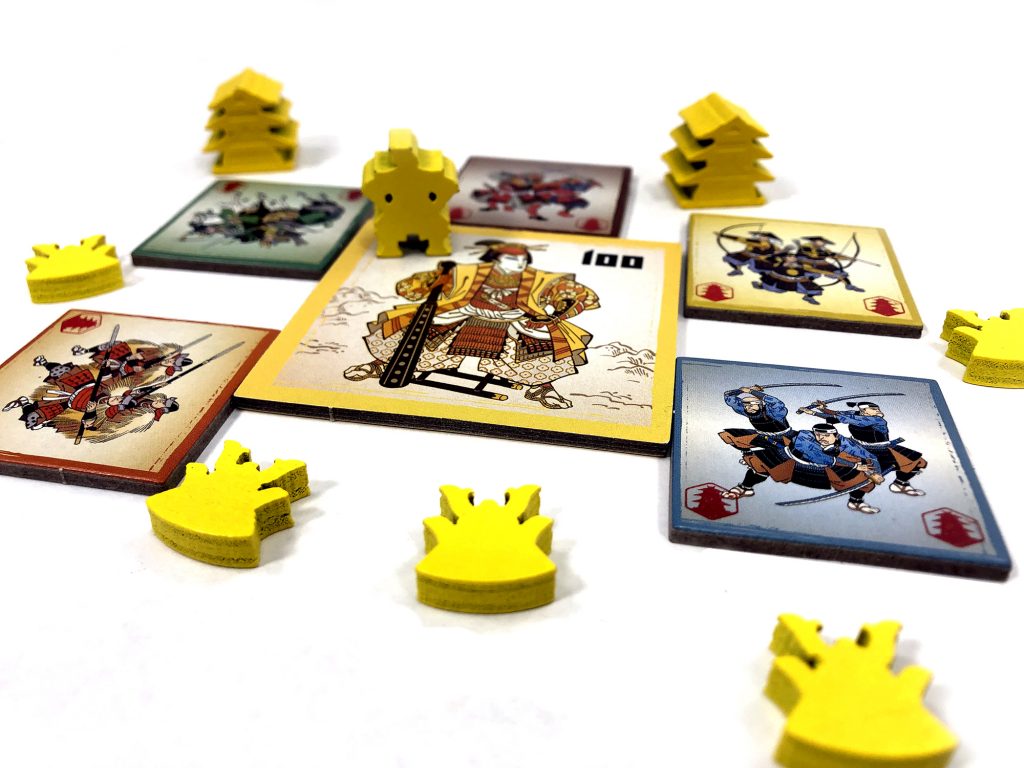 Each player will place their strongholds, the tall tower pieces, on the far left side of the board, based on player count.

Players will place one of their honor markers, the helmet pieces, at the bottom of each of the 5 colored columns on the left side of the board.

Group the war banners by flag (Lotus, Stork, and Dragon), shuffle them with the flag side up, and place one at the top of each column, in the row dictated by player count, stacking them in ascending point order. The Lotus banner at the bottom, then the Stork banner, and finally the Dragon banner. Note that at lower player counts, not all war banners will be used.

Finally each player will place their Daimyo on the zero space of the score track, and the game is ready to begin. 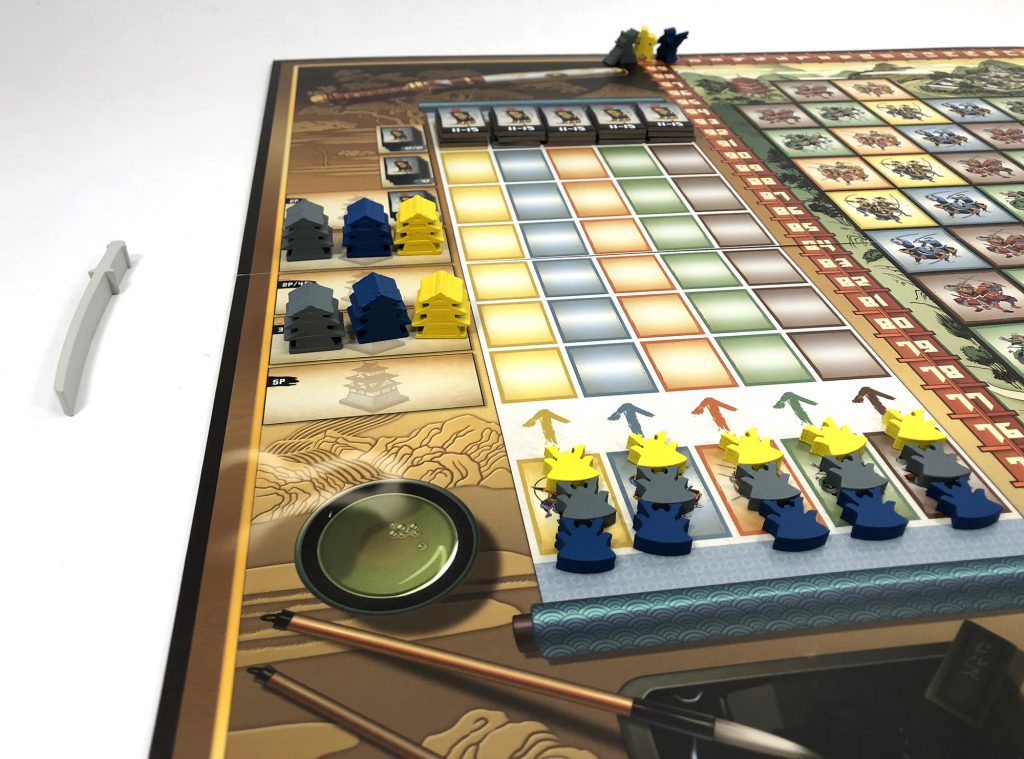 On your turn you’ll be selecting one of the three tiles from your hand (or one of your single square tiles) to place on to the board; where to place, and the orientation of your piece is a tactical decision. Once laid the piece will provide two scoring options. You may choose victory points (which are how you will ultimately win the game), or honor points (which can earn you a war banner worth between 1-15 points, but will also give you the ability to place a stronghold on the board). You can also choose a combination of the two based on your personal preferences.

As you might expect, you can’t just place tiles willy-nilly. There are some rules for propriety.

One color of a placed tile may never cover up the same color already on the board. In other words the blue section of the placed tile cannot cover up a blue square, and likewise with the other colors.

A tile can never extend past the edge of the board. Your troops must pull their weight and can’t go sneaking off for sake and ”entertainment”.

Tiles must always be supported from below on both ends: you must either place on the same level or shore up the position with one of your single square small army tiles. Placing a single tile like this must be part of your action and can’t be done on one turn to be used on a future turn.

If you play a large army tile, draw a new one to replace it. Single army tiles are never replaced.

After placing your tile you’ll be able to choose victory points or honor points for each color group touching the tile you just placed. If you select victory points, count up the total number of squares touching your tile and advance your daimyo that number on the score track.

If you select honor points, then you tally up the number of stronghold icons in the same groups, and advance your honor marker on the corresponding honor track on the left side of the board. 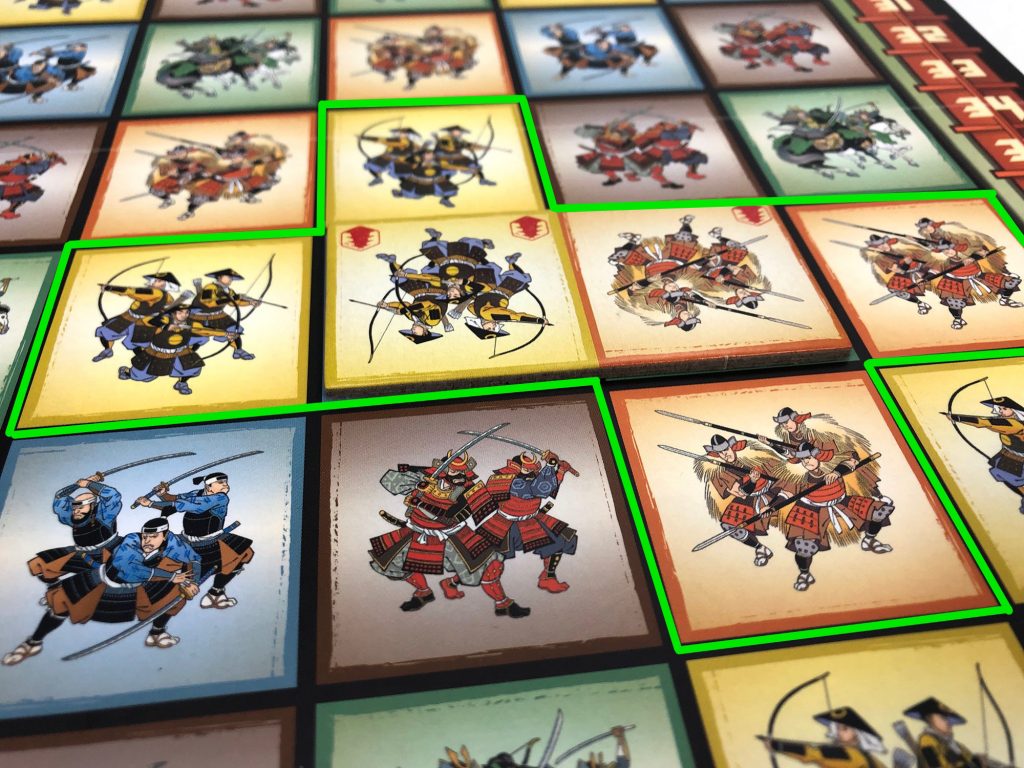 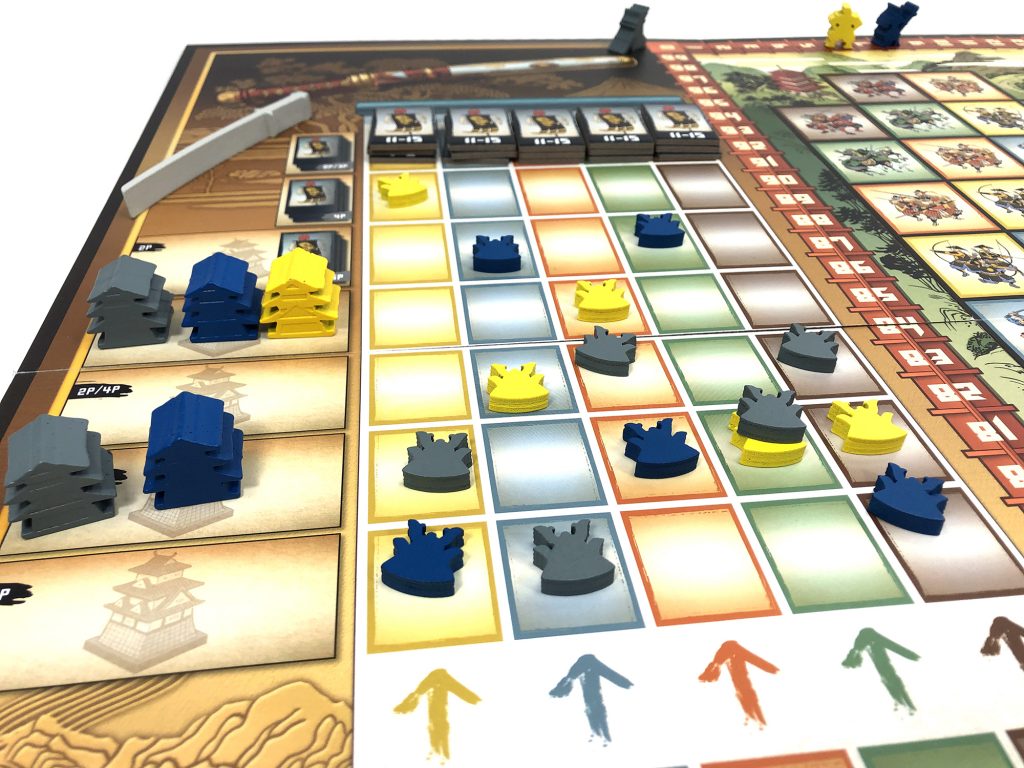 Strongholds may never be replaced or moved for the remainder of the game. Additionally no player, including the owner of the stronghold, can earn points for placing next to this area.

At the end of your turn, each stronghold on the board will earn you victory points based on how many troops of that color exist next to it. 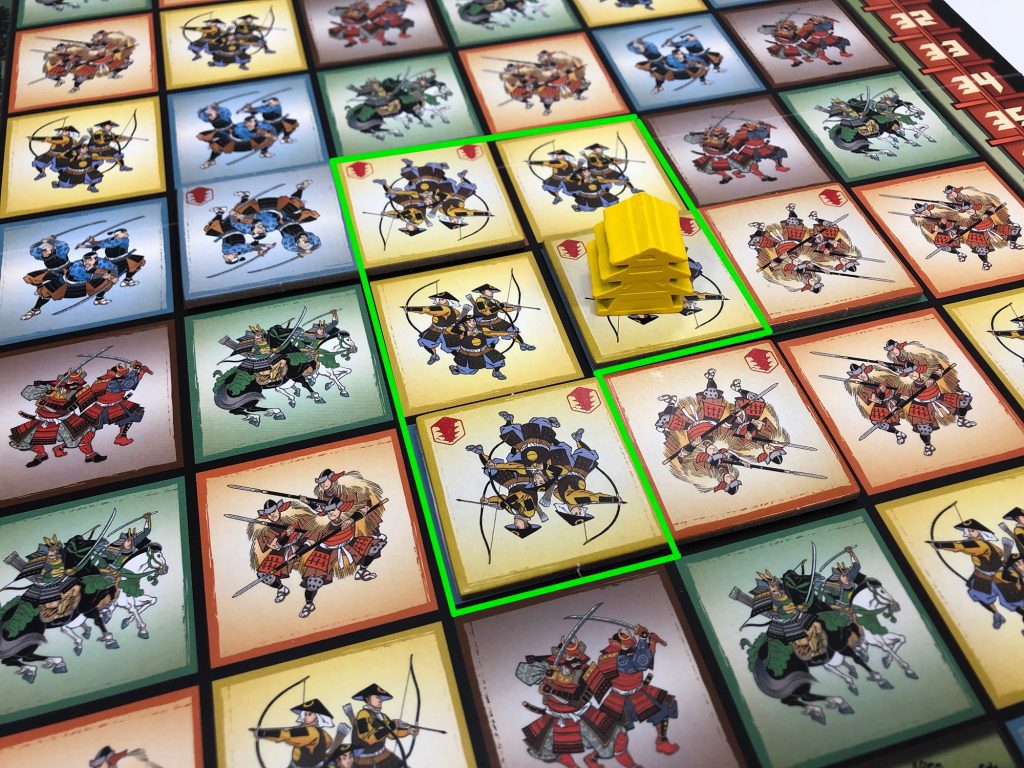 If your stronghold is on an orange group consisting of 8 squares, then you’ll earn 7 points.

If you’re able to advance one of your honor markers to the top of a column then you’ll earn the topmost war banner, which will earn you a variable amount of points at the end of the game. You’ll know what that point total is but your opponents will not. This offers a nice touch of uncertainty.

The downside to claiming a war banner is that your troops of that type are now exhausted and will not earn you victory points any longer. 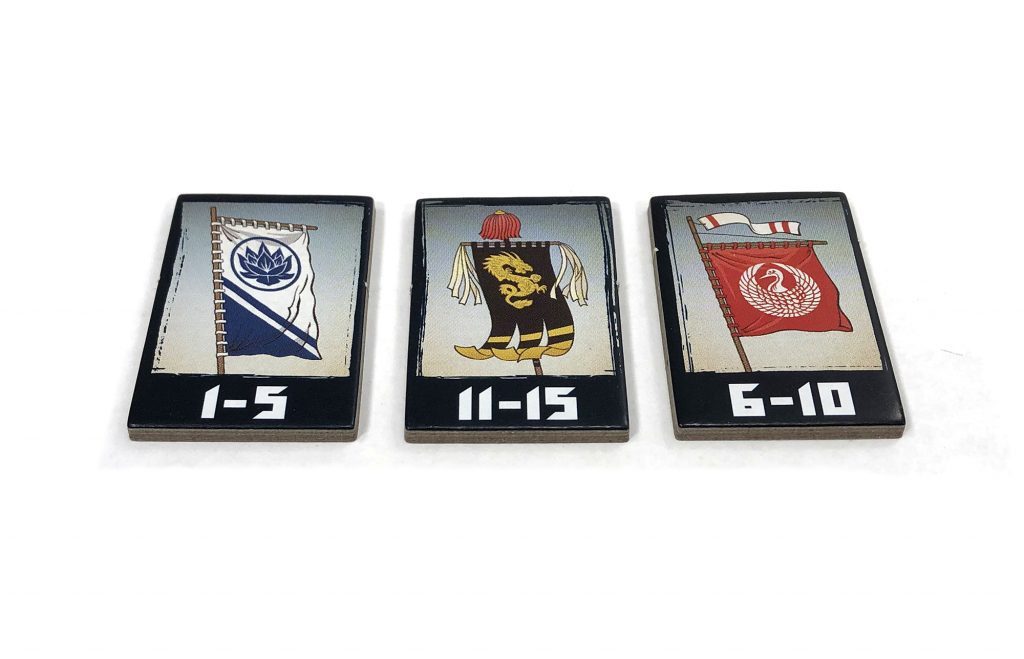 When the last of the main stack of large tiles is taken, uncover the small 5+1 stack and draw from that. Once the Gunkimono tile is revealed the game is over immediately. Reveal any war banners, add them to your total, and revel in your victory…or suffer the agony of defeat.

Gunkimono instantly appealed to me based on the artwork alone. I lived in Hawaii for 8 years, where there’s a large Japanese population, so I’m quite familiar with, and fond of, that style. Then once I found out more about the game play I became even more intrigued. Area control is one of my favorite types of game, and when you include the rapid game play and increased player count, you really get my attention.

The components in Gunkimono are excellent, with thick cardboard tiles, cleverly designed wooden pieces (those strongholds are great), and a ridiculously over the top samurai sword first player marker. It’s also a nice touch that each player’s daimyo figure is unique.

The artwork is consistent throughout the game with wonderful illustrations of Japanese military troop types. The cover illustration by artist George Sellas is boldly drawn with vibrant colors and the distinctive style we’ve come to associate with historic Japanese artwork. 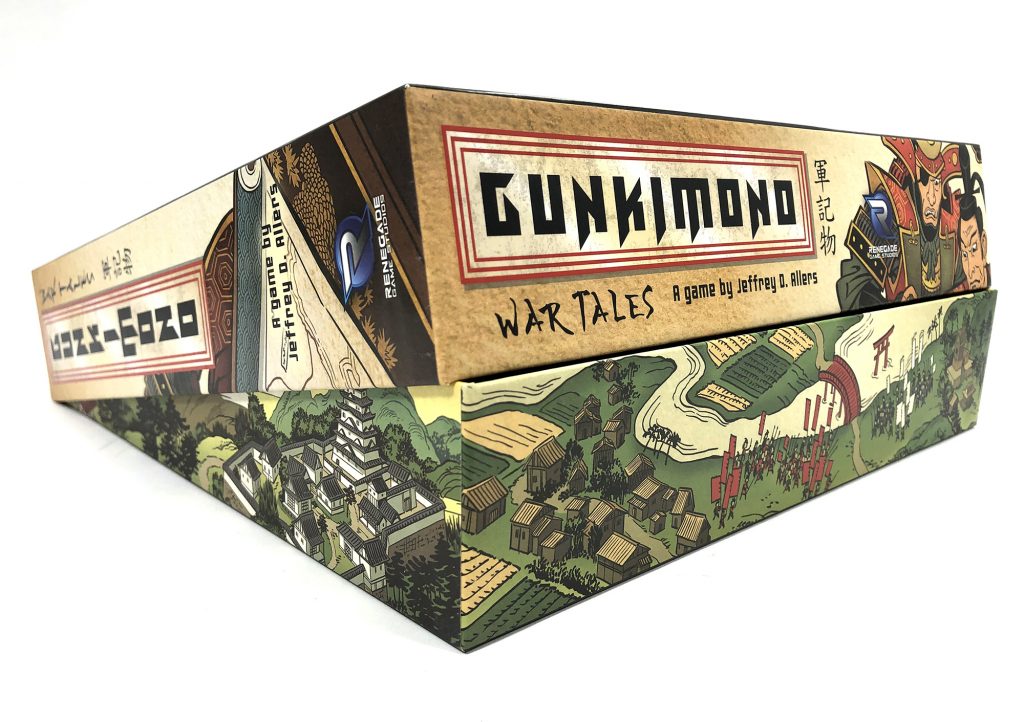 Gunkimono is a delight to play. I imagine as a designer it would be tough to extract something special from “do one thing on your turn” type gameplay, but designer Jeffrey D. Allers really knocked it out of the park. While each individual turn doesn’t amount to much, 5 points here, 3 honor points there, the sum of the parts is what makes Gunkimono shine. Do you choose to ignore victory points at the beginning of the game and go for the lucrative war banners worth up to 15 points? That’s a good score, but then you’d be sacrificing victory points for that color for the remainder of the game. Do you try to get just a few of each honor points so that you can place your stronghold and really rake in victory points? There aren’t quite as many paths to victory as in some other games, but there are definite choices to be made here, and the decision between them isn’t always cut and dry.

It’s also worth mentioning that Gunkimono is a retheme of an earlier game called Heartland  from the same designer; except in Heartland you’re farmers planting crops. Renegade did a good job adding in some new features that we’re in the original, so good for them.

Warfare is an ugly business, but at least in Gunkimono you’re spared most of the unpleasantries; unless of course you lose. This is easily one of my favorite games of 2018, and it’s a shoo-in to stay in my collection for years to come. Check out Gunkimono and maybe you’ll feel the same way!