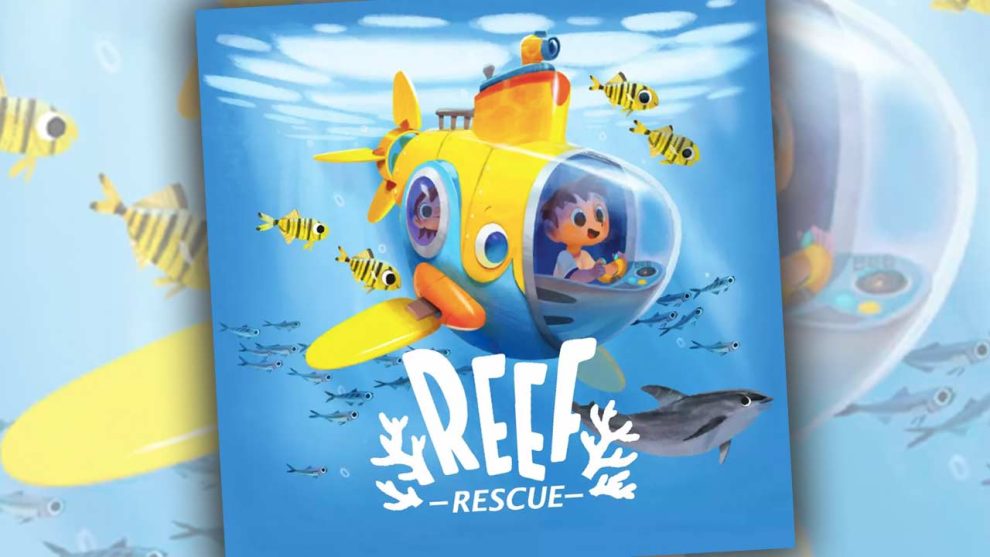 I pounded my fist on the table, beaten by my children…again.

After our second play of Reef Rescue (2022, Origame), I looked around the table and had to give credit to my children. Experts at all the Memory-like games that have hit my table over the last few years, my 8-year-old daughter and 6-year-old son made short work of me by doing what they seem to do best: 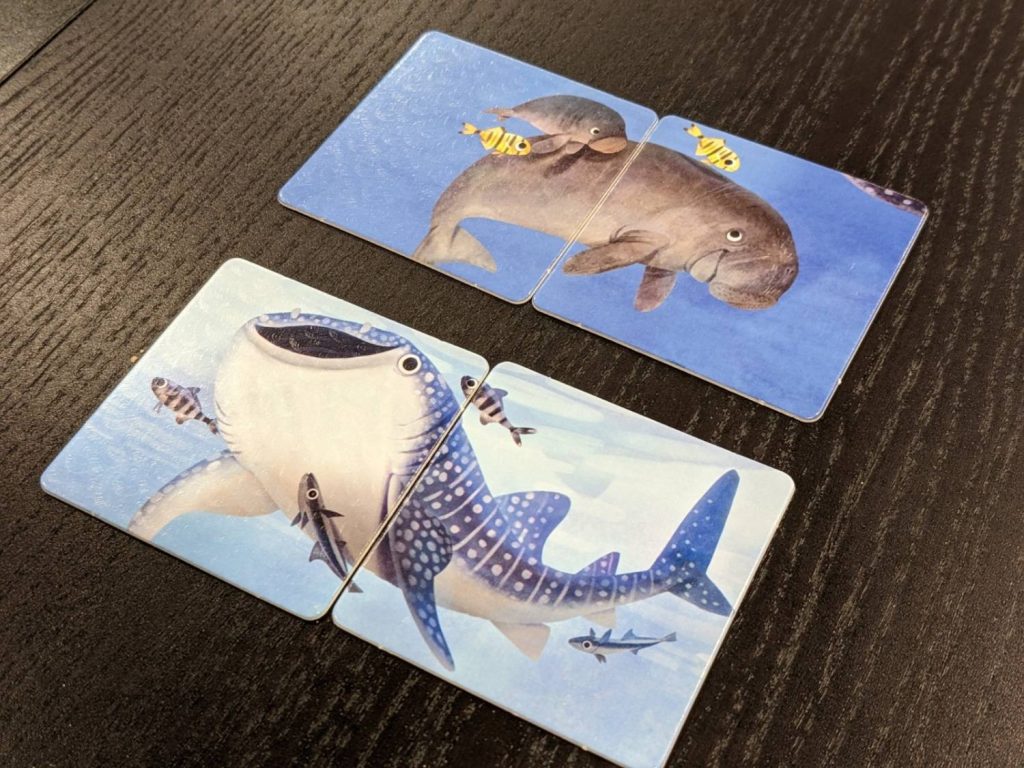 The opening lyric of the Earth, Wind and Fire song “September” is appropriate here. Reef Rescue takes many of the elements of the tile-flipping memorization game Memory—rows of tiles flipped over, with matches actually matching one half of a sea creature to another half—but adds a few twists, all in an environmentally-friendly package that is the size of a stack of Post-It Notes.

While there are 40 tiles in Reef Rescue, they are broken up in an interesting way. 12 of the tiles are those halves I mentioned earlier, making up six “Gigantic Creatures” such as a whale shark and a leatherback turtle. Three of the tiles make up the Great Coral Reef, which is the biggest scoring match in the game. 20 of the 40 tiles are known as Little Creatures, which can be picked up without making a match.

And five of the tiles are garbage. No, I don’t mean terrible tiles—they’re actual pollution. In an even more visually sensitive move, designer Daryl Chow made the pollution tiles really evocative by painting a picture of the ocean with small sea creatures trapped in a plastic bag, or a dead creature wrapped in unsafe netting or maybe trapped inside a plastic bottle.

It’s a minor touch but one that sets the stage for a game that is fun but also wants to send a message. For children looking to understand more about the environment, our kids’ school does a decent job of pushing some of those messages, but Reef Rescue allows the conversation to move into the home. Daryl Chow and Origame accomplished a similar feat with Rainforest City, a game that explores the balance of flora and fauna in Singapore and the impact of human activity on habitats. 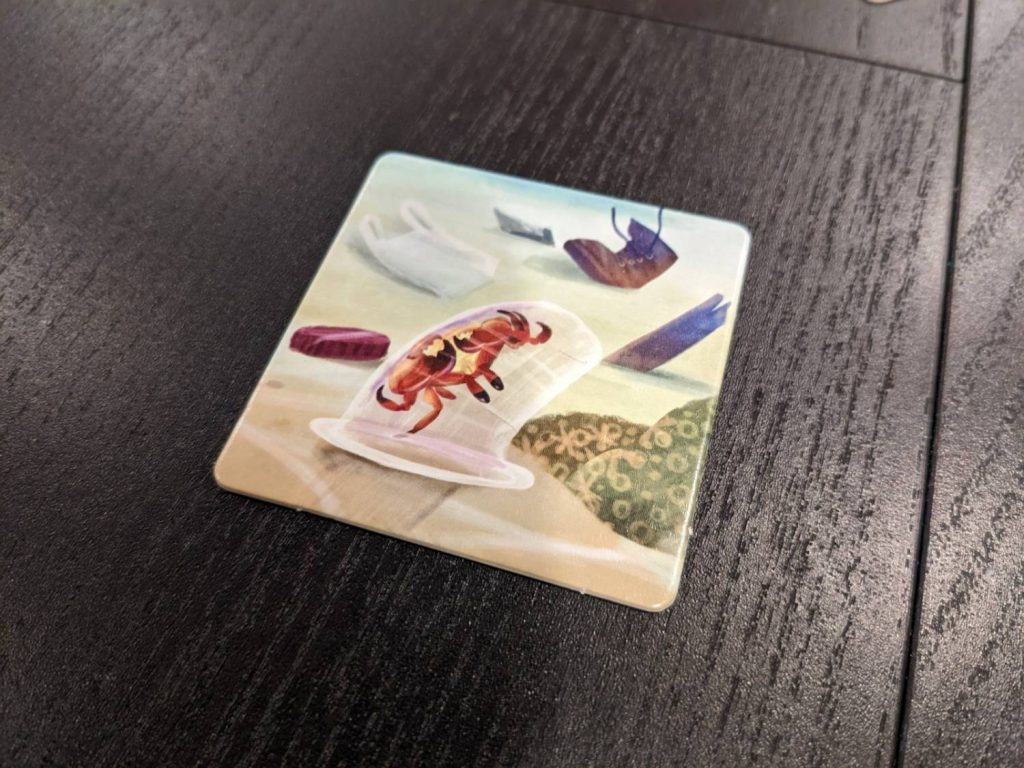 In terms of the game, the other twist on Memory is an action selection system, with four actions across two double-sided tiles. On a player’s turn, they can only choose from one of the two face-up actions showing on their action tiles, flipping the one over that was used after a turn is completed. In this way, a player can’t keep going with the same action turn after turn.

Two of the actions are similar: both allow for a player to flip up to five tiles, making matches with the Great Coral Reef three-tile set, any Gigantic Creatures and/or any single-tile Little Creatures as long as they do not flip over any pollution tiles.

The other two actions allow for a player to flip three tiles in any orthogonal direction, keeping any matches (or single tiles, if Little Creatures are discovered) even if a pollution tile is revealed. The final action lets a player look at three tiles in secret and then move the tiles if they would like.

This final action, Sea Scope, created some problems in my plays with the kids. Most people like Memory because they get to try and remember where certain tiles have been living in the initial setup grid. Sea Scope breaks that, and sometimes prolonged our games, so we house-ruled Sea Scope to just allow players to look at three tiles in secret but not move them. (I blame this on why my kids kept smoking me in Reef Rescue, but that’s for a different article.)

Reef Rescue ends as soon as there are 10 facedown tiles remaining in the original tableau (five of which are guaranteed to be pollution). 15 points are awarded if a player found the Great Coral Reef; 10 points are awarded for each Gigantic Creature match made. Little Creatures score one point per sea creature on those tiles (2-4 on each), and a 10-point bonus goes to the person holding the most 2-point Little Creature tiles. The winner is the player with the most points. 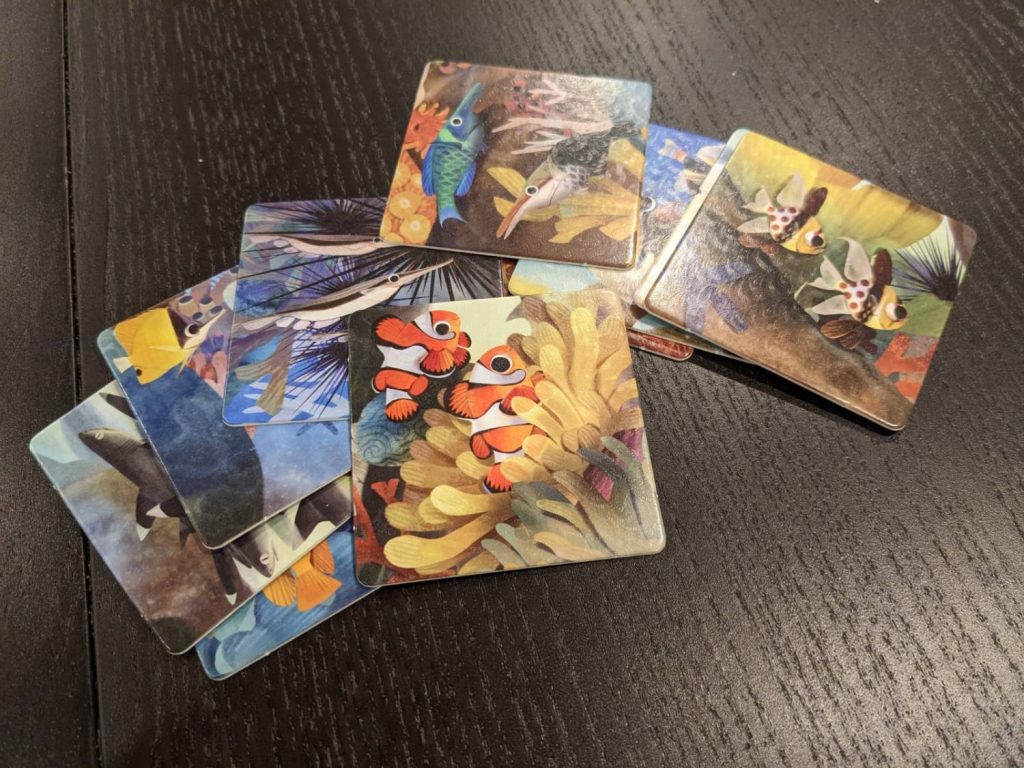 Reef Rescue is quick, a solid production with a tiny footprint, and it opens a conversation with the family about the environment. If you have read other family-weight reviews I’ve written, you know that my main stress test for these types of games is the repeat plays question. Do the kids play a game once, or do the kids play a game, then ask to play the game again right away?

I’m happy to say that as much as I enjoyed Reef Rescue, the kids liked it too, and it has such a small box that we just left it on our kitchen island for a few days. Families looking for a twist on memory games will find Reef Rescue to be a pleasant journey! 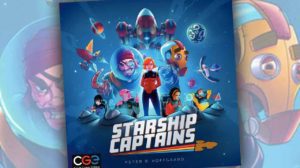 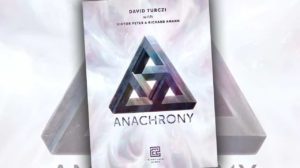 Justin goes back in time to visit the 2017 release Anachrony from David Turczi and Mindclash Games! 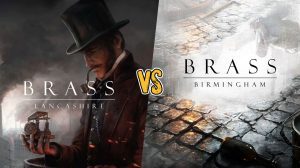 Justin considers both Brass games, Lancashire and Birmingham. Which does he prefer and why? 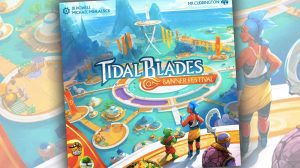