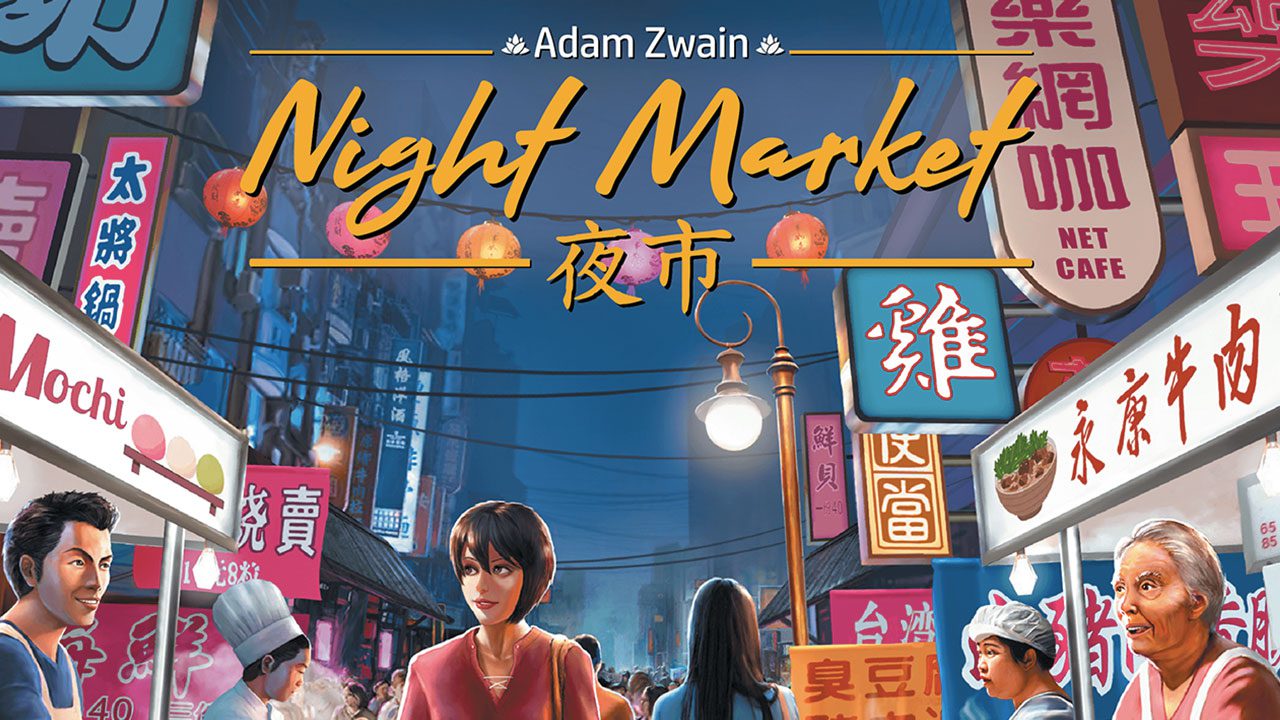 Reid Conley
Add Comment
Collect ingredients and master signature dishes to create loyal customers in Taipei City's new night market. Read our review of Night Market to find out if you have what it takes to make your stall the most reputable on the street.

In Night Market, you are a budding food stall owner in a new night market in Taipei City. You will be spending your days sending out workers to collect goods and your nights satisfying the specific tastes of the customers you have attracted. Throughout the game, you will upgrade your humble stand into a thriving, bustling business of tasty snacks and signature dishes.

Night Market features an innovative worker placement mechanism and an interesting spatial puzzle at its core and attempts to capture the feel of a bustling night market. So does the theme come through, and does the gameplay hold up? Let’s dig in and find out.

Night Market takes place over four seasons, consisting of three phases: day phase, night phase, and upkeep. The bulk of the gameplay occurs during the first two phases, and each has its own puzzle to solve. The game ends after the four seasons, and whoever has the most reputation wins.

During the day phase, you will be sending out your workers into districts to gather ingredients and upgrade your market in various ways. Each player has five workers and will place all five of them during the day phase. You place them onto districts that depict the four different goods: stinky tofu, bubble tea, chicken-steak, and sausage. When placing a worker on a district, you simply take the food shown. Like most worker placement games, once a district is taken up no other workers can be placed there.

The worker placement is my favorite part of the game. Trying to set yourself up to perform combos for just the right food while blocking your opponents from doing the same is fun and satisfying. The simplicity of activating workers also makes the game flow smoothly and quickly. Most of the time, you will just place a worker and take some goods, and then it’s the next player’s turn. You might puzzle over your most efficient move for a moment, but downtime during this phase is breezy. Decisions are hard enough to be satisfying and easy enough to be quick.

In addition to fighting with your fellow players over food, you also want to make sure that you are getting just the right amount of it. You are rewarded at the end of each round if you manage to have no leftover food. So, while triggering combo after combo and raking in food is satisfying and rewarding, it is sometimes in your best interest to try and get exactly the food you need with no excess. This adds an interesting layer to the decision space when placing your workers.

Some districts also have a lantern symbol. When placing a worker onto one of those districts, you must choose whether you will take the good depicted or perform a lantern action. These actions are the primary way of upgrading your market. There are three lantern actions to choose from: Hire a chef, build stalls and attract customers. 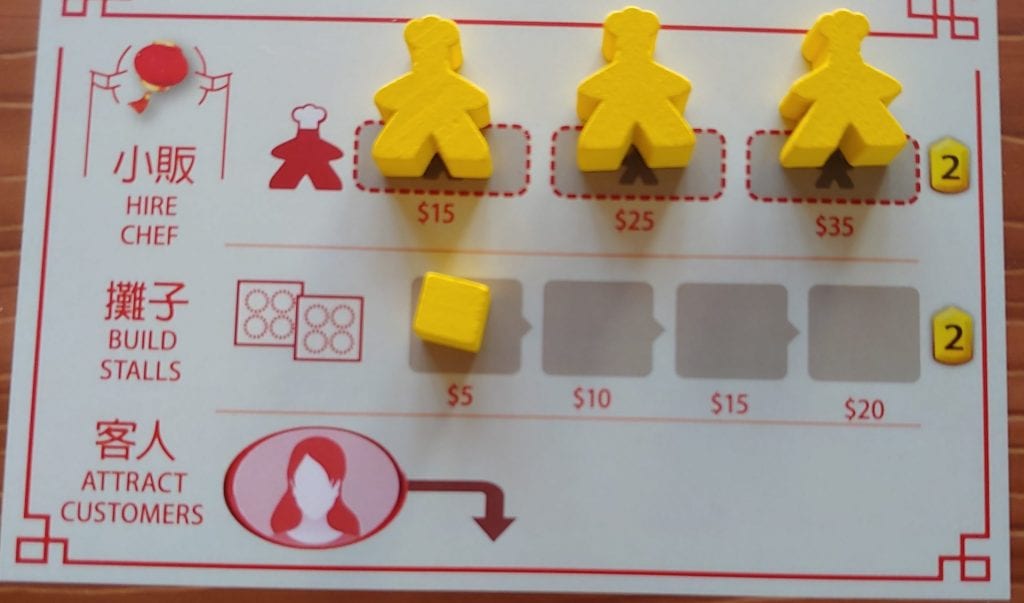 Hire Chef: To hire a chef, you pay the cost under the space your cube is currently on and then place one of your chefs on any available district and immediately activate it like a regular worker, including triggering any combos.

Chefs function the same as workers except that they can’t perform lantern actions. The difference between chefs and ordinary workers is that they stay on the board permanently from round to round and continue to function as placed workers to trigger combos. They can really open up your options and increase your goods intake.

Build Stalls: Pay the cost beneath your cube’s space to take any two stalls from the supply and place them anywhere in the market on your player board.

There are two types of stalls. Regular stalls hold four goods of any type. Signature stalls have one space for a signature dish and one to three spaces for regular goods. The only way to make signature dishes is to have the corresponding stall to hold it.

The stalls in your market are where you will place your goods during the night phase to satisfy customers.

Attract Customer: Pay the cost shown on the rightmost empty space at the bottom of your player board and attract any of the faceup customers from the display and place it beneath your player board.

Choosing between goods and lantern actions plays well into the worker placement mechanism. If you take too many lantern actions you won’t have enough goods to satisfy customers. On the other hand, if you don’t take enough lantern actions, you’ll struggle to earn reputation and ramp up production so you can thrive in later rounds.

Once all players have placed their workers, it’s time to head into the night phase and open up the market. During this phase, you may place the goods you collected into any and all available spaces on the stalls in your market and sell them to your customers. All players do this simultaneously.

After all your hard work, once you have finished placing goods and creating signature dishes, it’s time to make some money!

Each customer card has a mini-map of your night market on it to show you what types of goods they will buy, where they’ll buy them from, and how much they’ll pay for them. It also indicates how many goods they need to buy to be satisfied. Satisfied customers will stay on your player board to buy more food next season and are also worth reputation at the end of the game. Unsatisfied customers will leave, never to return.

Customer cards also indicate what type of signature dishes they will buy. Customers will buy their desired signature dish from anywhere in your market, so you don’t have to worry about where you place those. All of the signature dishes have the same value when sold to customers. However, when you sell a signature dish you also get to move up the popularity track of that particular dish which will unlock special abilities. 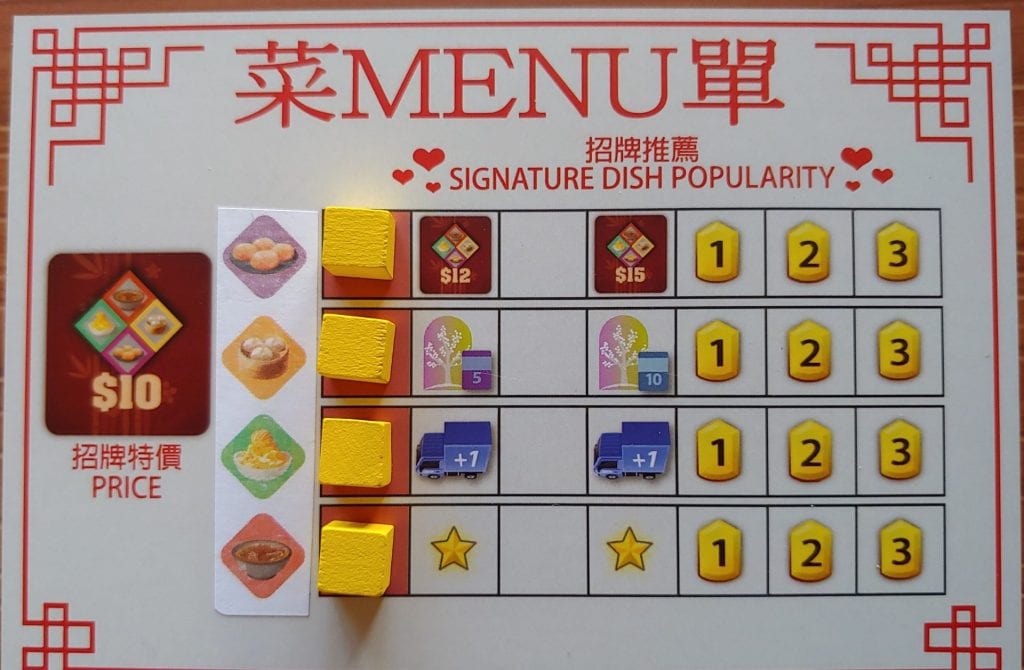 Mochi: Moving up far enough on this track will increase the value of all of your signature dishes for the rest of the game.

Shaved Ice: This track will allow you to create loyal customers that will return every season.

Soup Dumplings: Progression up this track will unlock delivery trucks that let you take goods of your choice at the beginning of each round.

Beef Noodle: Selling enough beef noodles allows you to upgrade your stalls. Upgrading stalls makes them more powerful and makes them worth a point. Upgrading a regular stall gives you an after-hours tile that lets you sell leftover goods or hold onto them for future rounds. Upgrading a signature stall makes it easier to make that type of signature dish.

Once all players have finished placing and selling all their goods, you determine the winner of seasonal goals.

At the beginning of the game, a goal is placed at the top of each season on the main board and gives all players something to work towards. The goals vary from earning the most money to having the most popular beef noodles. At the end of the season, whoever has performed best at the goal is last in turn order for the next round but gets first choice of one of the seasonal attractions.

There are four types of attractions that get progressively more powerful in each season. Your seasonal attraction will let you upgrade a number of stalls, add a wild signature stall to your market, bring you goods every round, or be worth some reputation at the end of the game. If you have your eye on a particular attraction you may find yourself pulled from some of your goals to pursue the seasonal goal instead.

Finally, you move into the upkeep phase, where you will remove customers that weren’t satisfied, return your workers to your player board, add some more lantern tiles to the main board and collect goods from delivery trucks and chefs.

After four seasons, the game is over and you earn reputation for leftover cash, satisfied customers, upgraded stalls, and maxing out on the tracks or upgrades on your player board.

A Market Worth Visiting?

I was immediately drawn in by the unique theme of this game, and I think it mostly does a good job creating thematic ties with the mechanics, though there are some blindspots. There is even some blurb about all the signature dishes on the game box, which is a nice little touch. However, there is enough going on in the game that the theme gets lost in the shuffle a little bit while you’re playing. I still applaud its uniqueness and implementation, though.

I am tempted to say that this game is a sort of next-step game for new players looking for something more complex than Ticket to Ride or Catan, but in reality, I think it finds itself stuck somewhere in between. This game has too much going on for new players to easily understand, but I also don’t think there’s enough for experienced players to chew on for more than a few plays. I enjoyed Night Market, but I am not particularly eager to play it again. I have quite a few other games I would bring out first if I wanted something lighter to play, and it’s not heavy enough for me to be the main course for a game night.

I really do enjoy the worker placement aspect, and I hope to see similar implementations in the future. Getting a board full of customers and trying to get exactly what I needed to satisfy their cravings was engaging. However, the spatial puzzle of getting the right ingredients into the right places for customers felt a tad clunky. I wish that everything in the night phase of the game was just a bit more streamlined. Also, I love moving up tracks, but I don’t feel particularly compelled by them in this game. They feel too separate from the puzzle at the core of the game that I enjoy. They present themselves as separate paths to victory, but each path isn’t different or compelling enough to want to try different strategies as they are all still centered around collecting goods and selling them to customers, so I wish the game had just focused more on that.

Personally, my biggest gripe with the game was player scaling, but this will only be a problem if you mostly play with two players. This game is playable with two but does not feel like it’s meant to be played that way. In particular, the seasonal goals were not worthwhile. Because there are always four to choose from and only two players are fighting over them, I never felt like I needed to pay attention to the seasonal goals because I would get first or second choice regardless. Also, turn order isn’t nearly as important with fewer players. So, something that should be potentially pulling your attention away from your short and long-term goals could be ignored without much penalty.

This may all sound harsh, but Night Market isn’t a bad game. It’s a fine game. I think it would have been better if it had been a bit more elegant and focused more on the worker placement and ingredient collection puzzle. As it stands, there are certainly some fun and interesting ideas here, but there isn’t quite enough to explore beyond a few plays.