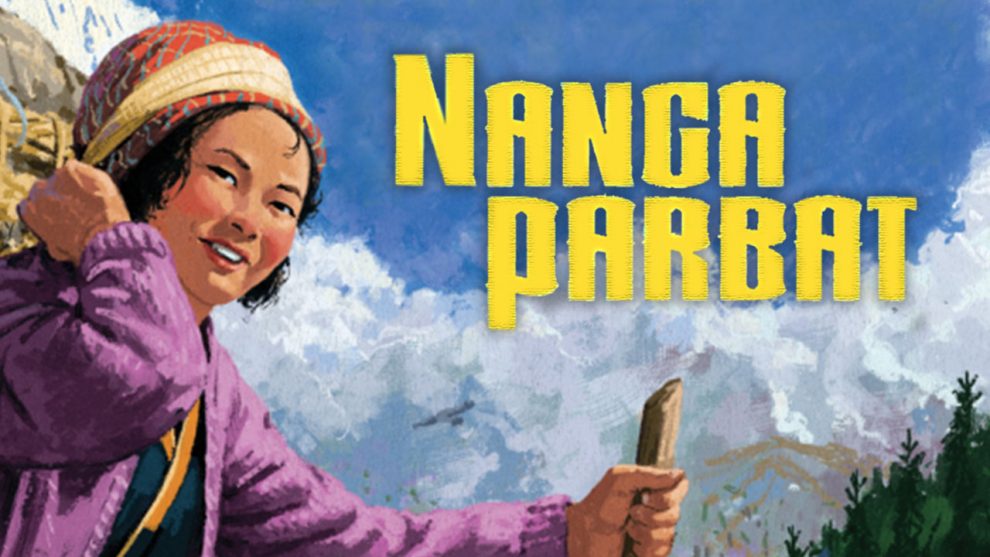 Reid Conley
Add Comment
Do you have what it takes to prepare the way for hikers in the Himalayas in this abstract game of set collection and area control for two players? Read our review of Nanga Parbat to see how it works and find out!

Nanga Parbat is an abstract, two player game where you act as members of a Sherpa community hiking, setting up camps, and capturing animals. The rules are simple, but there is room for clever play and satisfying decision making. You’ll score points by collecting sets of animals and controlling areas of the board with hikers and camps. A number of systems all blend together in this game to create an experience much more pleasant and smooth than I imagine a real hike in the Himalayas would be. The abstract nature of Nanga Parbat means it isn’t for everyone, but for fans of abstract games there is a lot to like here.

There aren’t many rules, but if you just want to hear my thoughts feel free to skip past the explanation.

The board is divided into six regions and each region has six sections. During setup, a random animal is placed on each section and each player takes a player board, a set of hikers, camps, and scoring cubes. To finish setup, determine a first player. The second player places the guide in a region of their choice to start. On your turn you follow four steps: trap an animal, place a hiker, move the guide, and build camps or trade animals.

Three of these four steps are tied to the animal you choose to trap. To trap an animal, you select one from the main board and place it on your player board. However, you can only take an animal from a section in the region where the guide is located.

After selecting your animal, you place one of your hikers in the section you just removed the animal from. Each section is numbered and the number on the section you’ve chosen also determines which region the guide moves to. This means your decision controls where the guide is for your opponent’s turn and which region and animals they have access to.

After following these steps, you have the option of building a camp or trading animals. This is how you score the majority of your points throughout the game. The scoring in Nanga Parbat is centered around the points chart.

Each turn, you can place one cube on the points chart for building a camp or trading animals. To build a camp, remove a number of adjacent hikers and replace them with tents. To trade animals, you must remove a number of different animals or the same animal from your player board and place a scoring cube on the appropriate space on the points chart. The rows show how many points you earn and the columns show how large the camp needs to be or how many animals you need to trade to score those points. Once a player has claimed a spot on the points chart, that spot cannot be scored again. So, if you are the first player to make a camp with four hikers, that option is eliminated for the other player. After each player has placed all fifteen of their hikers the game ends and whoever has the most points wins!

There are six different animals and four of them are associated with different special actions that allow you to manipulate the pieces on the main board. These special actions can be used at any point during your turn, but each animal can only be used once for its special action.

There is also bharal that acts as a wild for trading and the red panda that is worth one point if you are losing when you take it. When you capture one of these animals, it is placed on the top section of the appropriate space on your player board. To use an animal’s action, you move it to the bottom section. This indicates that it has been used to perform the special action and can’t be used again. Figuring out how and when to use these special actions is the crux of the game.

First of all, I want to emphasize the abstract nature of Nanga Parbat. The uniquely shaped wooden pieces are all delightful, but the theme quickly shrinks into the background until you are trying to remember the name of the animal that looks like a goat but apparently isn’t a goat. (It’s called a bharal, by the way.) This isn’t necessarily a problem, but you should keep this in mind if you are looking for a thematic experience. Also, if abstract games are not your cup of tea in general, there probably isn’t anything here that is going to change your mind. That being said, if you are a fan of this genre or are interested in exploring it, you’ll find something to enjoy.

At its heart, Nanga Parbat is about set collection and area control, and it manages to tie these elements together in a clever way that I ended up enjoying quite a bit. Like many games with perfect information, Nanga Parbat is all about getting into your opponent’s head and controlling their options. There are three big things — and one small one — that make Nanga Parbat stand above similar games for me.

The first is the way board manipulation works. Most abstract games are centered around specific ways you are allowed to move pieces on the board. A great modern example of this is SHŌBU, which has similar innovations in how it allows you to manipulate the board state. In Nanga Parbat, you essentially have a pool of moves that you choose from each turn, so you get to customize how you are able to manipulate the pieces. You also have a great deal of control over what options your opponent has and vice versa. You may have a perfect set of moves in mind, but to execute your plan you have to make sure you have the right animals at the right time. In order to get those animals, you have to hope that your opponent doesn’t see your plan and unwittingly set you up to get them. This creates a great feeling of push and pull that keeps you aware of what your opponent is up to, what they can do, and what you definitely don’t want to let them do.

The second standout element of the game is the animals being multi-use. Every time you select the animal on your turn, you are really making four major decisions: what option you will have for manipulating the pieces on the board, what set of animals you are trying to collect, what space you are trying to control with your hiker, and what region your opponent will be choosing from on their turn. Each of these elements is important and it is up to you to decide how you will prioritize these considerations. Will you play defensively by taking an animal you don’t really need and sending the guide to a region that you know is bad for your opponent? Will you take an animal because you need it for a set and its special action even though it sets up your opponent perfectly? The choice is yours and the right answer is rarely obvious.

The third thing that makes this game a winner for me is the scoring mechanism. Because each scoring option is limited to one player, there is often a race to score certain spaces. This race adds another layer to figuring out when to use animals for their special actions. Maybe you have just the right animals to chain together special actions for an amazing turn, but also want to remove those animals from your board to score a set before your opponent can. This is just one example of the kind of decisions you’ll find yourself making in a game of Nanga Parbat.

The one small thing that made a difference for me is the components. I played with a prototype copy, but it was a very nice prototype. Every animal and wooden piece had a custom shape and the color palette is bright and pleasant. I know I said that the theme is almost entirely abstracted out, but the artwork and custom animal meeples definitely contributed to my overall enjoyment of the game and made it more memorable than it may have been otherwise.

A Small Word of Caution

My first game of Nanga Parbat was not enjoyable for me. This was mainly because I felt like every turn was significant, but I couldn’t piece together what exactly I should be doing. Even though the rules are simple, I felt like there were too many choices and I couldn’t trace the consequences of them. This melted away after a handful of plays when I understood how everything worked together, but I wasn’t sold right away. This is both a good and bad thing. It’s good because there are things to learn and discover. It’s bad because it may not be immediately inviting. This is, of course, just my experience. You may play this and immediately understand how it all works and think I’m ridiculous, but I feel that this game takes a few plays to really understand what you’re trying to do. Once I started piecing things together, I ended up liking this game more than I thought I might.

Nanga Parbat brings unique elements to the abstract genre that I enjoyed more than I expected. Every aspect of the game is tied together in a way that isn’t immediately obvious but pays off after a few plays. Fortunately, it’s not hard to play a few times in a row because the game is so quick and the rules are quite simple.

I really appreciate that this game doesn’t rely on pretty pieces, gimmicks, or overly complex systems to get you to enjoy it. It’s a simple, solid ruleset that relies on your opponent making smart decisions and you outsmarting them. I recommend Nanga Parbat to anyone who enjoys two player games and is looking for something with some meat on its bones that will stay interesting for a while and can be played in 20 minutes or less. Nanga Parbat is currently on Kickstarter along with a number of Dr. Finn’s other designs. If you think you’d enjoy this game I recommend checking out the Kickstarter while there’s still time! Collect ingredients and master signature dishes to create loyal customers in Taipei City's new night market. Read our review of Night Market to find out if you...