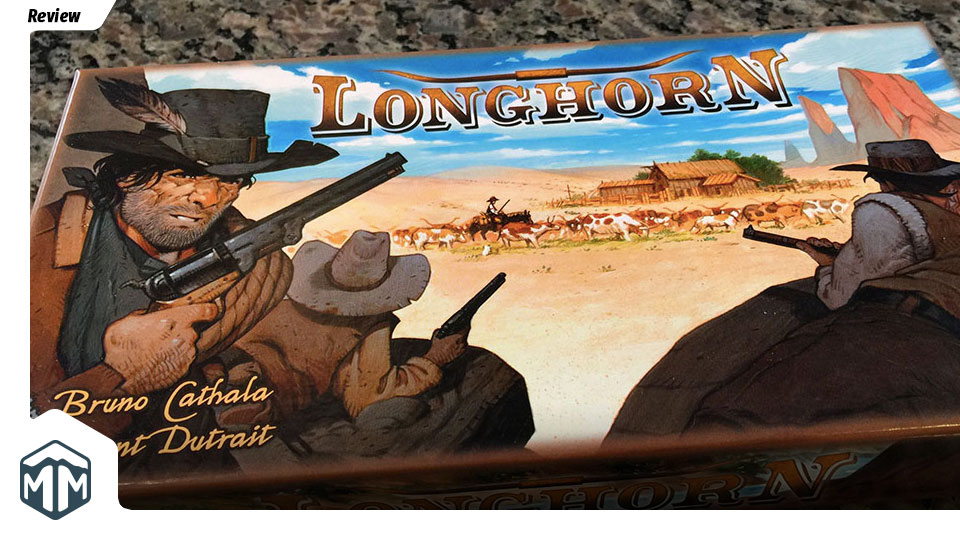 In Longhorn two players compete to rustle the most cattle from the 3 x 3 grid of locations. Be careful though, rustle too many of one breed and you won’t be able to sell them at the end of the game. The game is over when there are no more legal moves. The cattle you have at the end of game, plus any gold nuggets you managed to steal along the way, will give you your score for the game. 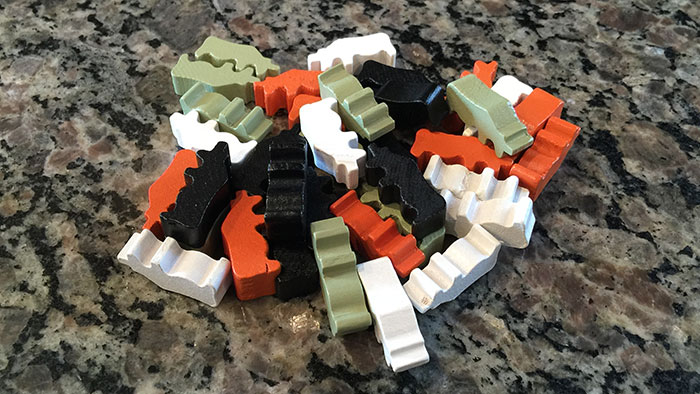 How to Setup Longhorn

Setup for Longhorn takes onle a moment or two. Players first select which outlaw they want. Will you choose evil Jesse Artist Bird or the mean and nasty Eagle Perkins? 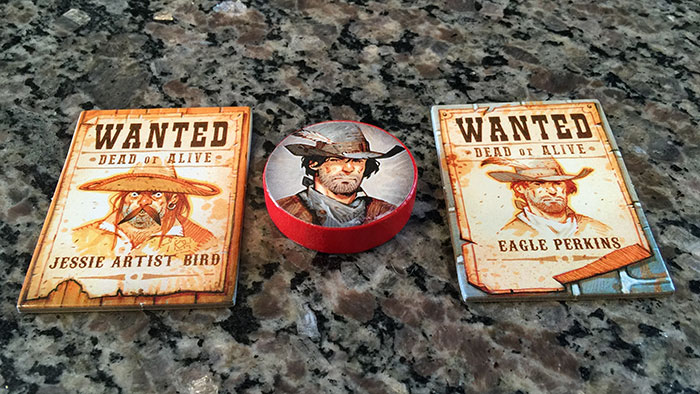 Randomly lay out the location tiles into a 3 x 3 grid. Shuffle the square action tokens and place one on each location. If by chance the Sheriff badge token is picked, it must be placed onto the Nugget Hill location.

Mix up the cattle pieces and randomly place an amount of cattle onto each location tile based on the number found in the bottom left corner of each location. For example Red River Valley should always start with 4 cows, while Nugget Hill should start with 6.

Flip the double-sided outlaw token as you would a coin, and whichever side lands face up is the outlaw who will take the first turn (let’s say Eagle Perkins for this example). Then the opposing player, representing Jesse Artist Bird, will place the outlaw token on any space with 4 cattle (Dagger Flat, Kid Copper’s Ranch, Red River Valley, and Cherokee Spring). 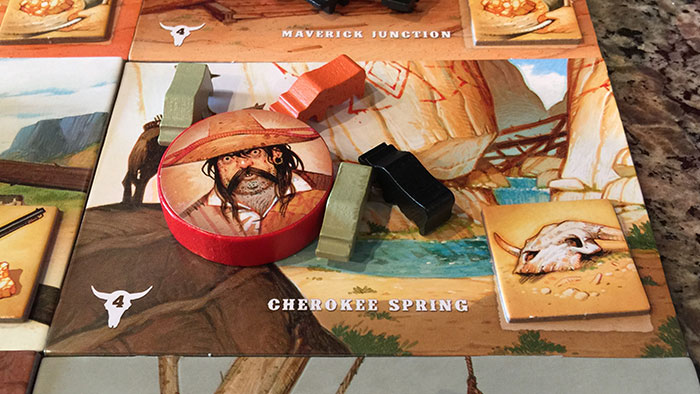 Below you can see the game setup and ready to go. 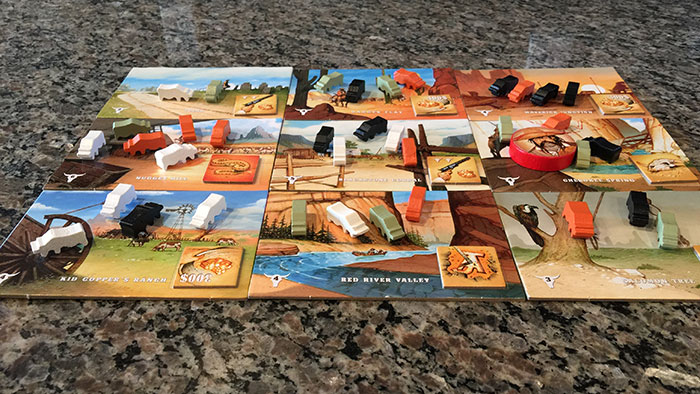 How to Play Longhorn

The first thing a player does on their turn is to steal cattle. Select a color and pick up every cattle piece of that color from the current location and place it in front of you. These cattle will form the player’s herd, whose value will be calculated at the end of the game. If the player selects the last of the cattle from the location, then the player must pick up the action token and take it’s action.

The player then must move the outlaw token a number of spaces equal to that of the cows they just rustled. Movement:

If all of the spaces to which a player can move are empty, then the game is over and scoring will begin. After moving the outlaw token, the player flips it over to indicate that it is the next player’s turn.

There are 7 different action tokens in the game:

The game is over when one of the following conditions occurs:

To determine the worth of a player’s herd: each cow in their herd will earns the outlaw $100 for each cow of the same colour still on the game board! Each player also adds up the value of the gold nuggets in front of them. The player with the most money wins!

The illustrations in this game are fantastic: Vincent Dutrait’s work is just amazing. It’s obvious that Bruno Cathala respects the art enough to give Vincent’s name equal billing on the cover of the game. The colors are vibrant and rich with the oranges and browns of the desert and the beautiful blue skies. The text and icons are clear and easy to read and stay out of the way of the art.

The game pieces are sturdy cardboard with a nice paper coating. The cattle pieces are well made and their colors should be easy to differentiate. The outlaw token is thick and wide and easy to pick up and move around.

The game plays fast and once you’ve read the rules thoroughly you should be able to play without any issues.

What I Dislike About Longhorn

I picked up Longhorn on a recommendation from a website. I’ve played it a number of times with my 10yo daughter and, while it’s moderately enjoyable during play, it mostly fell flat for me. I generally like games with a mancala mechanism, but Longhorn feels odd to me. You can move in more than one direction, but because the board is only 3 x 3 it’s hard to make good choices about where you end up.

I like the variability of resources, knowing that there’s a balance between taking too many, and leaving enough that the ones you take are valuable at the end of the game. But because there’s really only about 8-12 turns, it also feels like the game is over too fast.

Longhorn is the actually the smaller, older brother to the critically acclaimed Five Tribes. When I mentioned on Twitter that I had Longhorn one of my Twitter followers (heya Ben O’Steen), asked if I’d be interested in doing a review.

I think Longhorn could have been something more than what it was…but then it ended up becoming Five Tribes…so I suppose that’s saying something.

While I wouldn’t refuse to play the game if I were asked, I’d certainly try to steer the choices away from this.