Although I am mostly known for solo gaming, I have been slowly cultivating a new gaming partner;  my 6 year old daughter, whom we shall call “E”. E showed a love for games pretty early on and I grabbed onto the interest as fast as I could.  Since then she has become quite a gamer and is almost as enthusiastic as I am! This past summer we both attended our first gaming con together, Dice Tower Con in Orlando, Florida.  I even documented our experiences in a previous article, “A Mother and Daughter Walk into Dice Tower Con…”

The game collection of a 6 year old

E has been exploring many different games in my library and has now started her own collection; a pretty eclectic group of games that she loves.  As I look at her collection, I see one game company with more representation than any other: HABA Games, of the bright yellow boxes.  There is something that continues to draw her to their games over and over again.  From their chunky pieces to the fun art that compliments every one of their titles, HABA caters to kids, and parents as well.  Their games are reliably fun, quick, easy to learn, and challenging all at the same time.

Exploring the jungle from the comfort of your table

One of E’s favorite HABA Games is Karuba: The Card Game.  This is a variation on the original game,  named simply Karuba.  In the card game version players take on the role of the leader of an expedition to the legendary island of Karuba looking for temples and treasure.  Consisting of only 16 cards per player deck, Karuba: The Card Game provides a unique and fast gameplay experience. 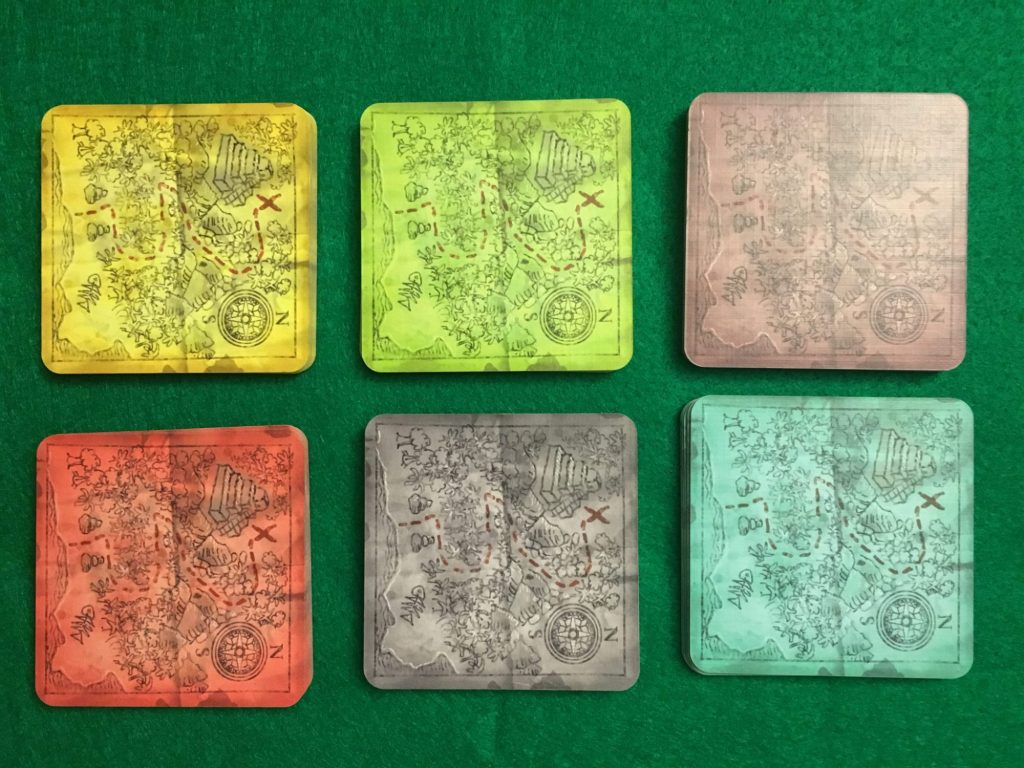 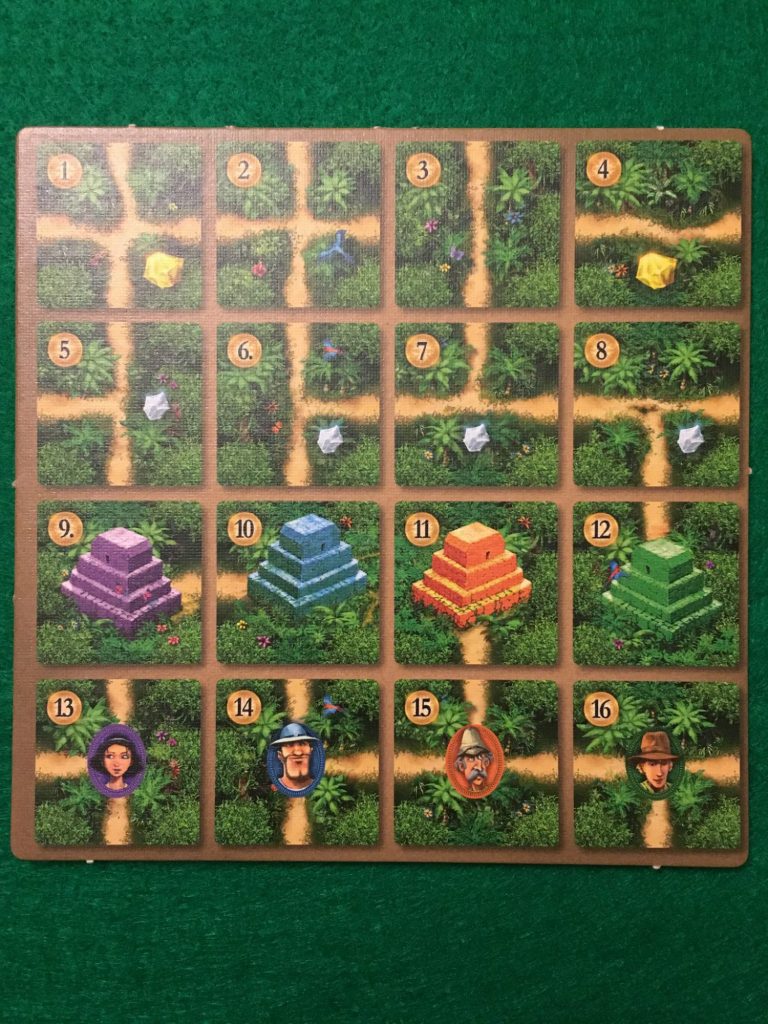 Each player controls their own board, building their own paths based on their hand of cards.  The cards contain a number between one and sixteen in the upper left hand corner and a picture. The illustration may be just a path, a path with a temple, a path with an adventurer, or a path with gold or crystals.  Building a 4X4 grid of cards, players must connect each adventurer with their color-coded temple, while trying to pick up crystals and gold along the way. 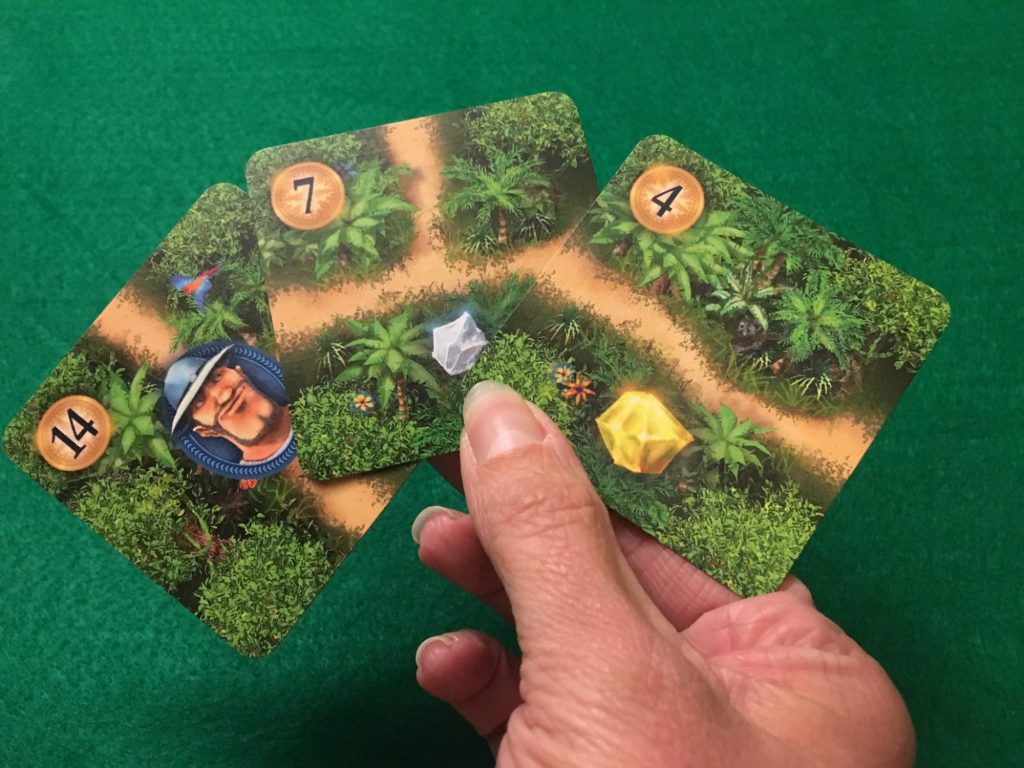 The game consists of eight rounds with three phases in each.  During the first phase, players will select two of the three cards in their hand to play face down on the table.  Once everyone has chosen their cards, all players will turn over their cards. The players will then add up the two numbers on the left hand side of their cards.  The player with the lowest total will play one of their two chosen cards, discarding the other.

In the second phase, laying down cards consists of the players adding their new cards to their personal island.  Personal islands are placed in front of the individual players in a 4X4 grid. All cards must be placed with at least one side touching an already placed card. When placing cards, paths do not necessarily need to connect to existing paths; dead ends are okay, as long as you adhere to the grid.  The last phase has players drawing two new cards, keeping the unselected card from the first phase, giving players a total of three cards once again. In the last round players will only have two cards in hand. 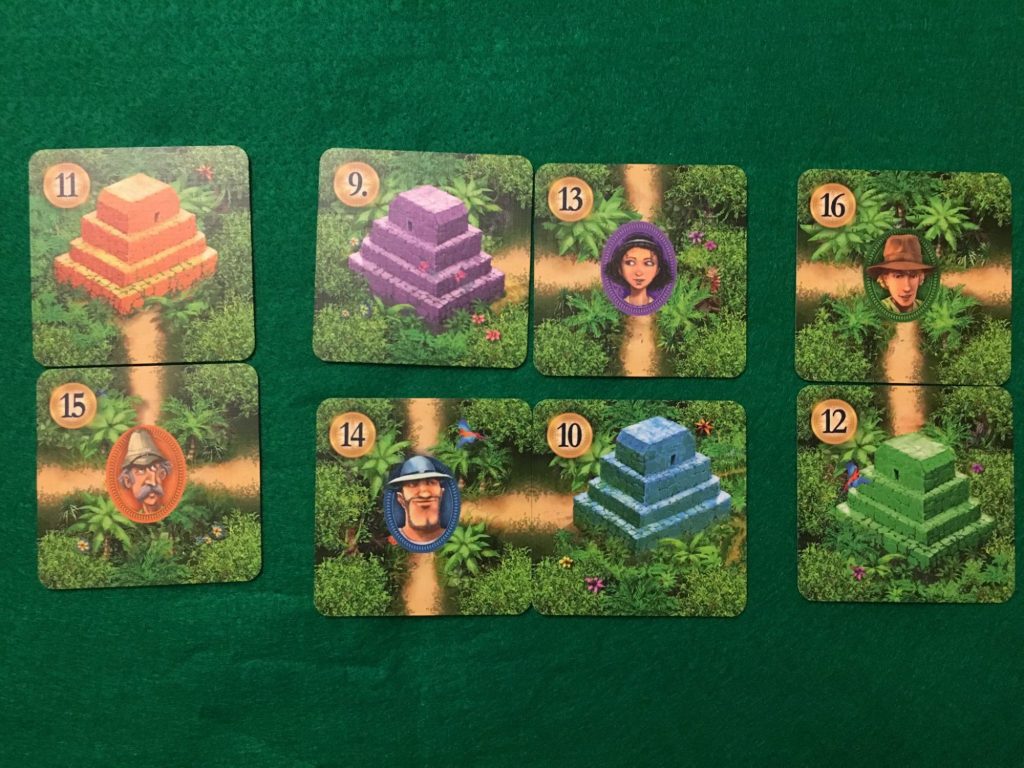 When the eight rounds have been completed, players will add up their points to declare a winner.  Each explorer that made it to their colored temple will receive three points. If another adventurer is located on the path to a temple, the way is blocked and no points can be collected.  Adventurers that pass gold nuggets collect an additional two points, while crystals are worth one point. Once all points are added up the best guide is then declared! 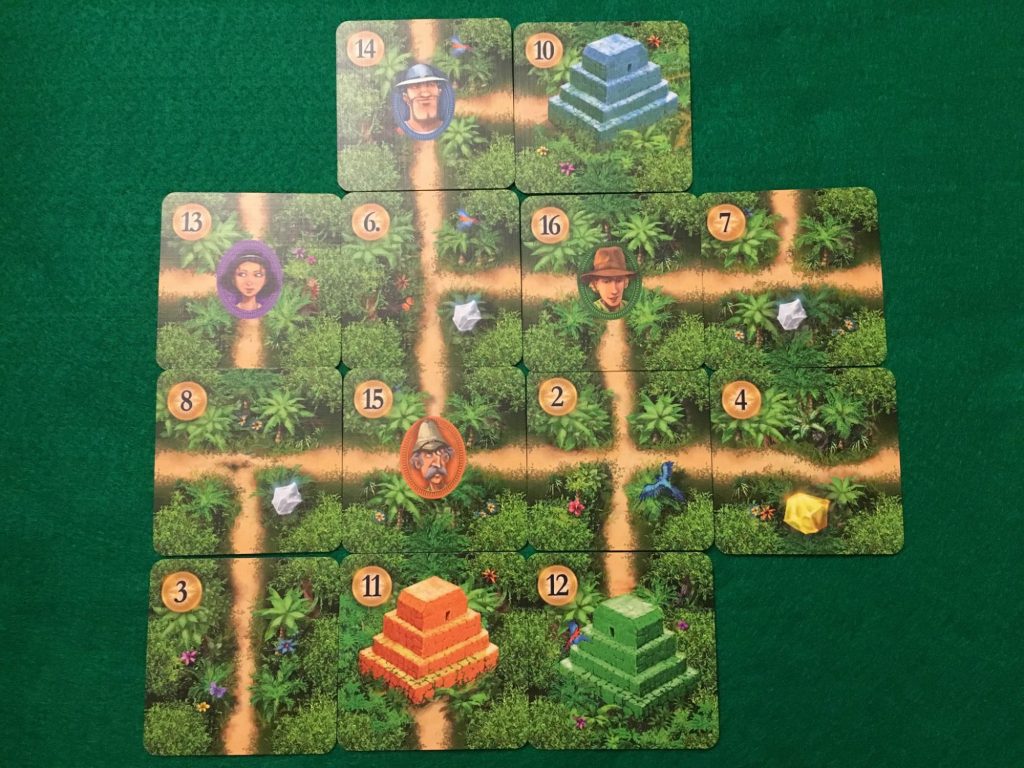 My thoughts on Karuba: The Card Game

As I mentioned before, this is a really fast, fun game.  E loves this game and it has quickly made its way to the top of her playlist.  Karuba: The Card Game takes about 15 minutes or less to play and makes a great filler game for us.  There is very little downtime with all players choosing and placing their cards at the same time. One of the biggest obstacles I have playing with a younger gamer is keeping her attention for an entire game.  Her absolute favorite game to play is Too Many Bones by Chip Theory Games.  It is a very long game, which means we have to play it in chunks to keep her involved, otherwise she starts to get fidgety.  There is none of that in Karuba: The Card Game. From start to finish she is active and engaged. I love the math factor, seeing her add up the different numbers to see if she has the lowest total.  She also tries to work out her final point total to see if she won. This was a nice little bonus for me as a parent.

The game was an instant hit with my daughter.  During a recent playdate she taught Karuba: The Card Game to her group of friends.  It was amazing to see her teach the game to them and help them play through their first experience.  A lot of these friends have had little experience with modern board games. They caught on quickly and enjoyed it as much as E did.  E has taught it to her aunts and grandparents as well. Karuba: The Card Game is an easy recommendation for families of all ages to play together. If you are looking for a quick, fun, and easy to learn game experience, this game is for you!