Kaiju Exchange Review – You KNEW Those Tentacles Would Come in Handy

Years have passed since Debtzilla and the other kaiju wreaked their havoc on the landscape of Banana Republic. Thanks to our intrepid heroes, the monsters were finally put to rest. In the aftermath, amidst the confusion, chaos, and rubble, it was discovered that the kaiju had unintentionally left mankind a gift: their refuse.

The slime, the eggs, the tentacles, the otherworldly metal sloughings had almost mystical properties. Nobody’s quite sure who discovered this, but one thing is for certain. That useless junk—that biomass—suddenly became very valuable and a booming market emerged to support the wheeling, dealing, and exchange of these commodities. And thus was born the Kaiju Exchange.

In Kaiju Exchange, each player represents a biomass production start-up: a company dedicated to the fulfillment of the global demand for biomass products. The competing companies will procure and trade biomass materials, using them to fulfill contracts for both money and favors from the powers that be. The players don’t live in a vacuum, though. They’re part of a global effort, so it behooves them to trade and negotiate deals with the very people they’re competing against. Who will reign supreme as the most influential biomass producer on the planet? It could be you!

At the beginning of each round of Kaiju Exchange, each player will receive two random Local Demand cards and, based on their particular profession, their workers will produce biomass materials that the players will try to use to fulfill these demands or the demands in the Global Market which all players have access to. Once each player has taken their turn, Banana Republic will take a turn and attempt to fulfill any Global Demands that are available using the biomass resources stored in its coffers. If it is allowed to fulfill too many, the game will end and the players will lose. Otherwise, the first player to achieve 6 Influence points will win the game.

This is a very simplified version of how the game is played. If you’re interested in a more detailed explanation, then continue reading. Otherwise, feel free to jump to the Thoughts section to find out what I think about Kaiju Exchange.

During setup, each player will be given a random player board. Each of these boards represents a particular city. The player that receives the Singapore board will be the start player and will receive the Start Player token..

After each player has received their board, they will also receive 5 wonga (the monetary unit in this and all of the other games that take places in Capital Game Studios’ Debtzilla universe) as well as a starting material of their choice, 2 random Demand cards, and 2 Exclusive Contract cards (which are kept secret). 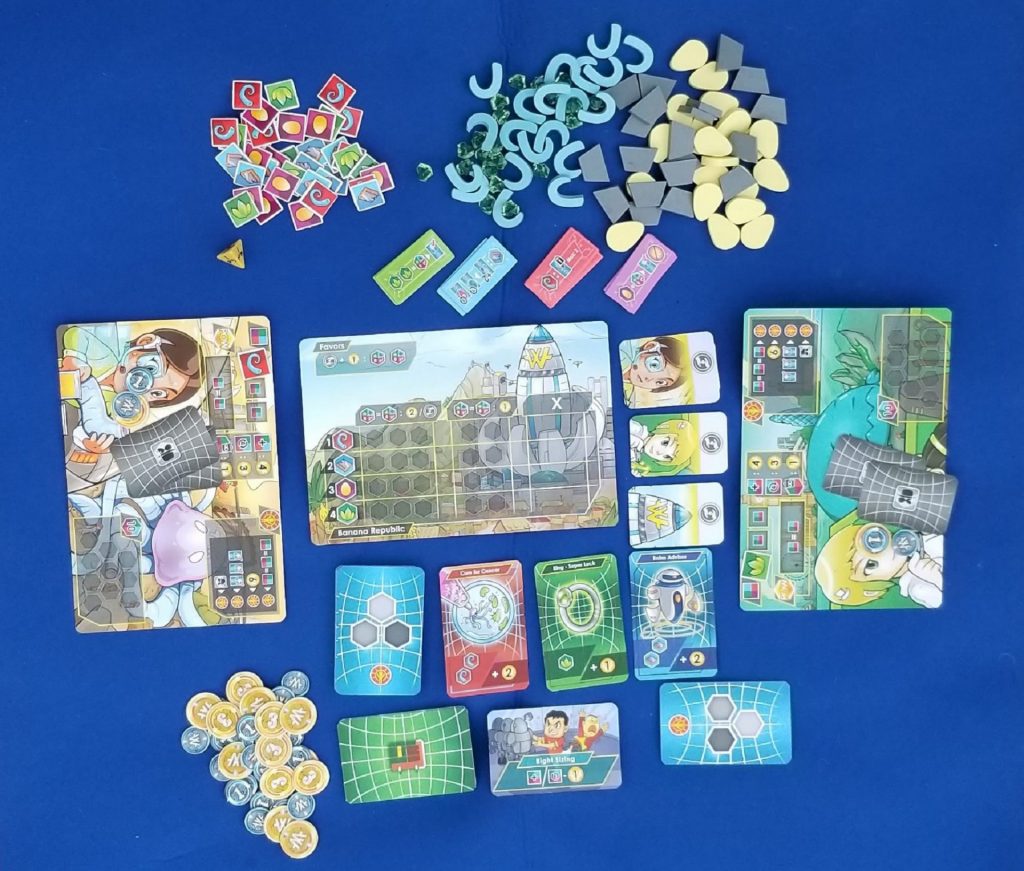 Then the play area is set up by first removing all of the ‘3 material’ cards from the Demand deck and placing them face down to form a discard pile. The Banana Republic board is placed into the center of the table along with the Favor Tiles for each player’s city, Expertise tiles, as well as the Alliance, Wonga, Material, and Crew tokens. Below this board will be where the Global Demands will be located. These demands are formed by placing the shuffled Demand deck face down and then drawing 3 cards from the top of it and placing them face up next to the deck. There are also some Event cards which will be shuffled together to form a deck and placed face down nearby.

With all of this completed, you are ready to begin playing Kaiju Exchange.

Each round in Kaiju Exchange is comprised of several phases. In the first phase, an Event card is turned face up. This event will dictate some effect that occurs for the remainder of the round. For instance, one Event might make hiring Crew cheaper for the round while another might let you convert one type of biomass into another. In the next phase, the Player phase, each player will take turns performing actions. These actions include (in order): 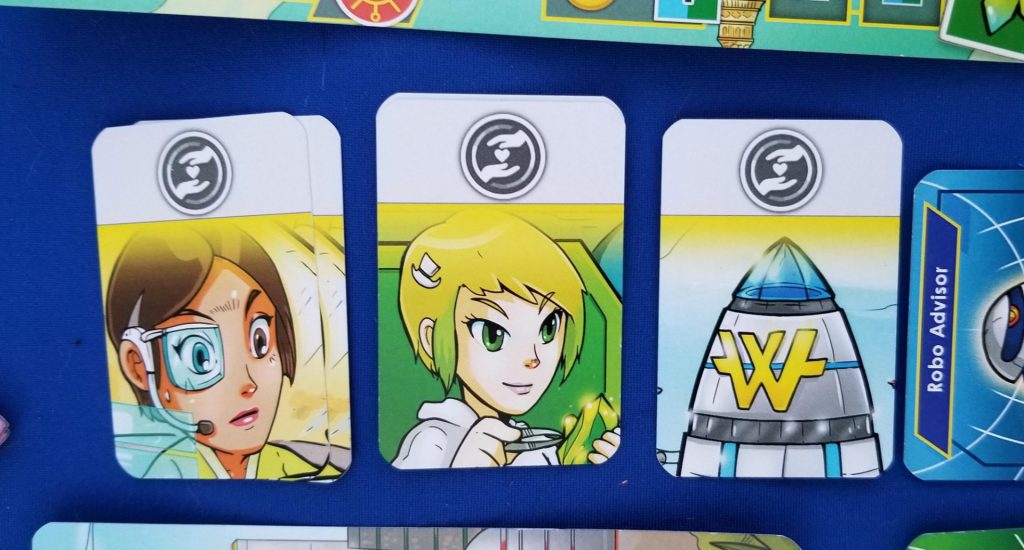 These cards will be replaced with 3 semi-circles in the final product. When 2 are combined with the Alliance token, they will create a completed circle.

Once Banana Republic is finished, each player receives 2 new Local Demand cards from the deck and the Start Player token passes to the next player in clockwise order.

The only way to win a game of Kaiju Exchange is to be the first person to gain a total of 6 influence. Influence can be gained in four different ways:

Since fulfilling an Exclusive contract nets you 6 wonga and 1 influence, it is effectively worth 2 influence at the time it is fulfilled. And, as I mentioned earlier, if any person manages to gain 6 influence before everyone else, that person wins the game.

As with their previous games like Debtzilla and Cryptocurrency Capital Gains Studios (CGS) not only sets out to create an enjoyable gaming experience but to also generate an opportunity for learning about the world of finance and trade. And once again, they have succeeded in both regards. The latter is due in large part to the educational guide that accompanies the rule book. It’s both a valuable teaching tool and a fascinating look into the mind of a game designer. In this guide they outline their vision for the game and demonstrate how each element mimics some aspect of global commodity exchange. They’ve done this for their past games and it’s always a pleasure to read. I find myself looking forward to the educational guides almost as much as the games themselves.

And what a game this is! It’s got all of the hallmarks that I’ve grown to love about CGS’s line of games: a quirky theme, a strong educational bent, interesting mechanics, and artwork that just screams “Capital Gains Studios”. Alan Bay’s artwork has graced several of their games now and it’s instantly recognizable. While he’s not as prolific as some of the most well known board game illustrators working in the industry today, he’s just as talented. His zany comic book style works fabulously here and sets the mood. Kaiju Exchange isn’t a game that takes itself seriously. It’s just good old fashioned fun. 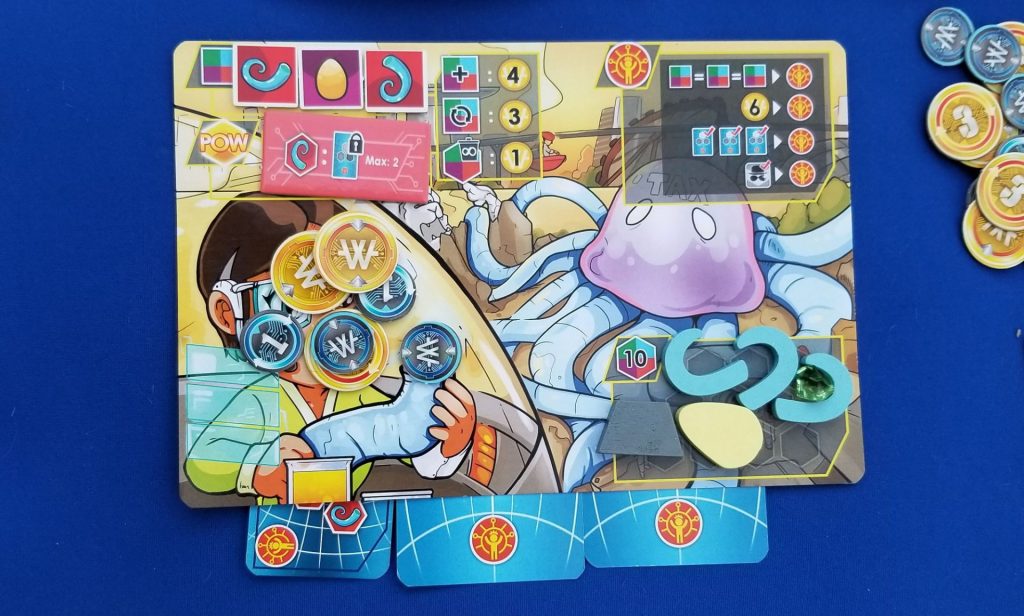 One of the things about Kaiju Exchange that I found particularly effective was the almost imperceptible way that the game ramps up the tension. At first it seems like the game is going to be a breeze as you effortlessly knock out one or two Local Demands on each turn, but then you run out of Local Demands that are easy or convenient to fulfill. Since Global Demands only refill once the full set of 3 has been completed, it might be tempting to always leave a Global Demand sitting out there by its lonesome to slow down Banana Republic’s efforts to bring the game to an end. It quickly becomes apparent, though, that’s not going to be a sustainable strategy.

One of the easiest influence points to obtain is from fulfilling 3 Demands on the same turn, which means that, inevitably, you MUST interact with the Global Demand market. Eventually, that market is going to get refilled and then your troubles will begin. As the game progresses Banana Republic’s coffers will begin to overflow and suddenly it becomes a real threat as it effortlessly knocks out 2 or 3 Global Demands in a single go. Where moments before everyone was feeling pretty good about their current standing, now they begin to feel the game itself breathing down their necks. The tension is so thick you can cut it with a knife.

As it stands now, unless the players find some way to stop it, Banana Republic will win on its turn.

Kaiju Exchange is a game about making every wonga count. Nothing in this game comes easily. Everything is hard-earned and hard-fought. There’s a certain satisfaction to finally being able to expand your workforce and actually be able to pay them. But it doesn’t have to be hard. You don’t have to do everything on your own because, at its heart, Kaiju Exchange is a game about global trade. It wants you to wheel and deal with your opponents. It encourages you to give a little to get a little and this is really the only portion of Kaiju Exchange that falls short. While it would be undeniably easier to trade with other players for the things that you need to succeed, it almost never happens. There just isn’t any real impetus to trade.

In a game like Catan, the threat of the robber punishing you for having a large hand of cards is ever present. It’s sometimes better to trade cards off to other players than it is to have them snatched away from you by circumstance. You have more control over your fate that way. But Kaiju Exchange doesn’t offer any similar threat. Sure, there’s a limit to how many resources you can hang onto each round, but losing one or two resources doesn’t really hurt you and any trade that you make is almost guaranteed to benefit your opponent far more than it benefits you, so why bother? In all of the games of Kaiju Exchange that I have played, the trading aspect of the game was almost nonexistent.

Trade or no trade, though, the game still works and it works very well. I’ve enjoyed playing it. It’s easy to teach, easy to play, and presents an interesting challenge. Is it CGS’s best title to date? I don’t think so, but it’s still a very good one and it’s definitely worth taking a look.