Sometimes you just play a game, and it grabs you. You know from the first time you read the rules, that game will be special. For a lot of people, Race for the Galaxy is a game like that. With its fast playing nature and sleek card-driven gameplay, “Race” is a highly-regarded engine building game set in outer space. Now I was not initially smitten by the game. I found the symbology confusing and the strategy non-intuitive. After my initial few plays I pushed Race to the side and didn’t really think about playing it.

The design team of Race knew they had something special on their hands, but they also knew that there were plenty of people like me who gave Race a try but couldn’t grok the game quickly enough to see what makes it special. So they came up with Jump Drive, a simplified version of Race for the Galaxy which strips down the core mechanisms of Race and simplifies the gameplay while maintaining many of the core symbols that I and others found confusing in Race.

I should note that I now love Race for the Galaxy due to playing literally hundreds of games of it on the fantastic app implementation they have released.

So does Jump Drive hold up to the same standards as Race? Does it serve as an effective primer? Read on to find out.

The core gameplay of Jump Drive is based around multi-use cards and hand management, similar to Race for the Galaxy. Each card has a few characteristics. First, cards are divided into two main categories, indicated by the symbol in their upper left hand corner. Cards with a diamond are technology cards. These cards tend to give you new abilities and discounts throughout the game. Cards with a circle are worlds and these cards are generally going to score you points. 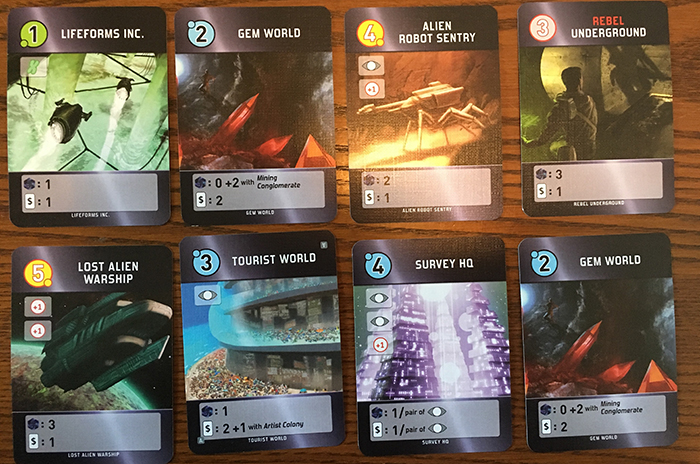 The second important characteristic is the number in the diamond or circle. This is the cost to play the card, but more on that later. Third, cards will have a series of symbols along their left side. Finally, cards will have some production values listed at the bottom. 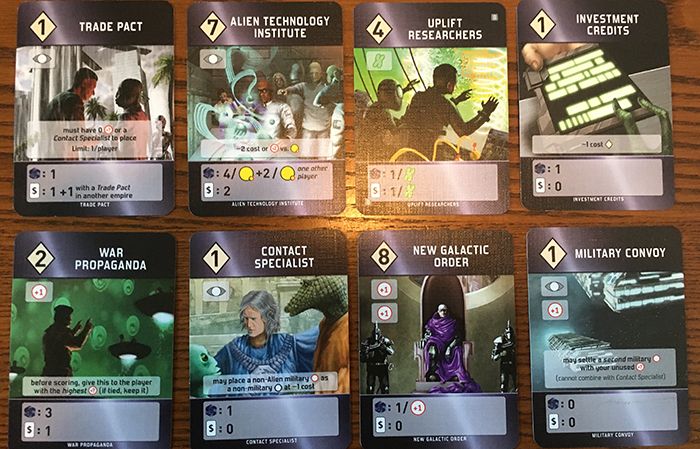 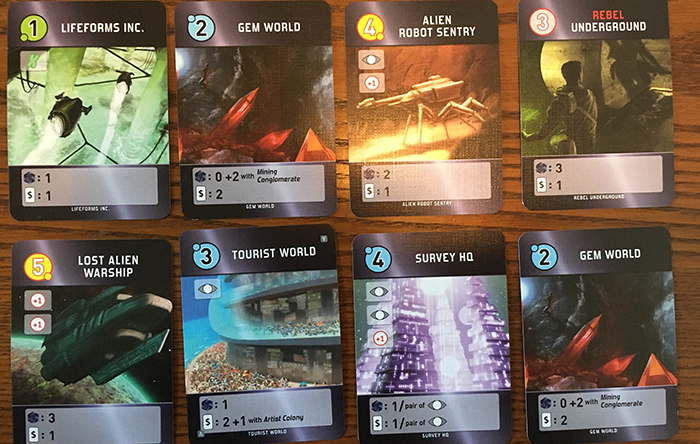 The third action you can take is to play both a development and a technology. When you do this, you do not get the discount on the technology or the additional card draw for placing the world.

Finally, you can explore, and when you explore you take an explore marker and count up the number of explore symbols (the eyeball symbol) on that marker plus all others in your tableau plus two additional symbols. You then draw that many cards from the deck, mix them with your hand and then keep cards such that you gained two.

As an example, if you start with six cards in your hand and you explore with five explore markers you will draw five cards into your hand and discard down to eight cards.

Finally, at the end of your turn you produce cards and victory points based on the values specified on your technologies and worlds. 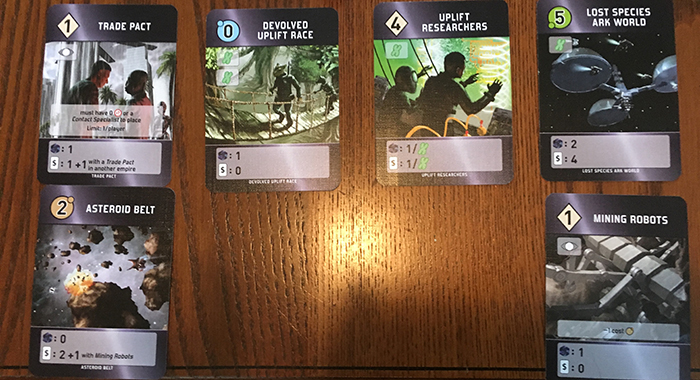 Gameplay continues until one player has 50 points. If multiple players surpass 50 on the same turn, the player with the most points wins. Games typically last only 6-7 turns and take less than 20 minutes with experienced players.

Jump Drive is a great game, and I’ve enjoyed it every time that I have played it. The simple card based system is easy to learn and very quick to play. Building up your tableau of cards and finding a path through each turn is incredibly satisfying.

There are several advantages to Jump Drive compared with Race for the Galaxy. First, it’s much easier to learn. Race is a complex game with symbology that can cause even the most experienced gamer to turn up their nose before giving the game even one play. Jump Drive incorporates much of the same artwork and symbols that Race does, while eliminating several confusing facets from Race. Also, the phase selection from Race has been eliminated and the decisions of what you can do on your turn are significantly simplified and you don’t need to consider what other players will do as much.

The second advantage of Jump Drive compared with Race is that production and consumption are simplified. Instead of having several phases related to consumption and production, your tableau automatically produces victory points and cards for you to draw. This simplification creates moments where you’ll produce 20 victory points and draw a dozen cards on a turn. Even though I really enjoy tight, tense games, the moments when the game showers you with points and cards are rewarding and keep me wanting to come back for more.

On the other hand, all of the things that make Jump Drive a great game and a simplification of Race for the Galaxy, are all of the reasons I will play Race instead of Jump Drive every chance I get. Jump Drive removes the tense phase selection decisions from Race, which were the biggest form of player interaction. Also, Jump Drive strips down the engine building nature of Race into a simpler tableau building game. Finally, in Race, each player is given a starting world which should help lay out a starting strategy. Variable player powers is one of my favorite board game aspects since they push you towards different strategies and I do miss that as I’m playing Jump Drive.

Jump Drive has been presented as a good way to build up to Race. I agree with this premise since it covers much of the symbology, but it doesn’t really prime you for the phase selection and engine building aspects. If you’re looking to build up to Race for the Galaxy, I recommend playing both Jump Drive and San Juan, since San Juan introduces the phase selection and production aspects that Jump Drive does not.

Overall, Jump Drive is a very fun and satisfying game. The game overflows you with riches and you are bound to have turns where your fruitful victory point generating system will score you a lot of points. As someone who loves Race for the Galaxy, Jump Drive scratches a similar itch. Though I’d rather be playing Race, I’m happy to pull Jump Drive out when the group I’m playing with isn’t interested in playing Race. Finally, any game that gives you challenging and interesting decisions and that lasts 20 minutes should be considered for anyone’s collection. I highly recommend Jump Drive.

What do you think about Jump Drive? Give us your opinions about what you like and/or dislike about the game in the comments below!