Jaipur is a card based trading and set collection game for two players, designed by Sébastien Pauchon and released in 2009. In Jaipur each player is hoping to become the personal trader of the Maharaja by collecting and exchanging goods: gold, silver, gems, leather, spices, or cloth. Jaipur is played in rounds, with the winner collecting 2 out of 3 Seals of Excellence. 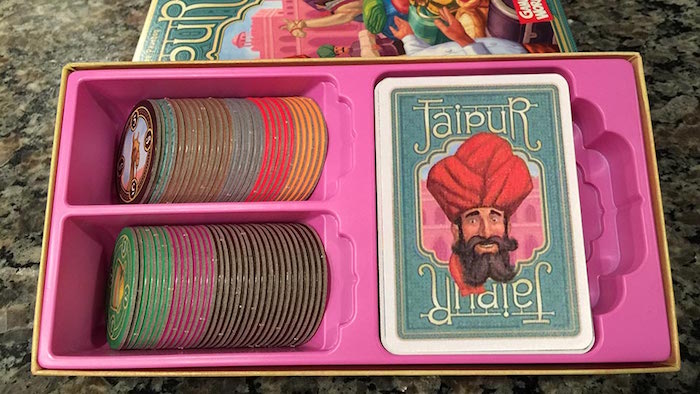 How to Setup Jaipur

The game begins by laying out the tableau (as seen in the picture below) and removing any camels from player’s hands and adding them to their herd on the table in front of them. 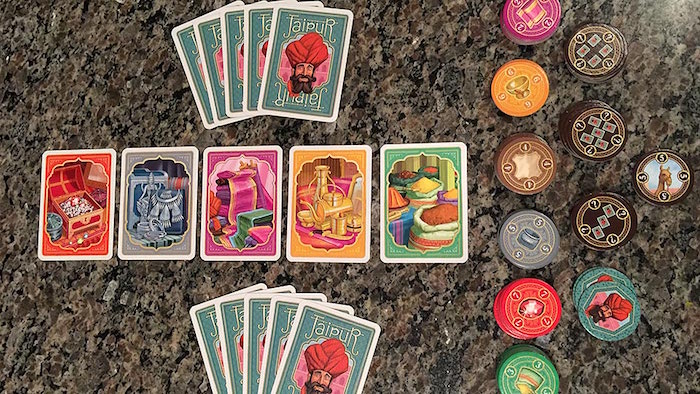 How to Play Jaipur

On their turn players may either sell cards to the market, or take cards from the supply. Play proceeds in turn order until the end of the round.

When taking cards, players have 3 options.

If a player takes several goods to their hand, they must exchange them with cards from their hand (replacing 2 gems and 1 gold with 3 leather), with camels from the herd in front of them, or a combination of the two.

If they take a single good to their hand, they will replace it with a card drawn from the top of the deck.

Finally, if they choose to take all of the camels, they place the camels into their herd, and replace them with cards drawn from the deck.

If a player chooses to sell cards, they will discard the cards they wish to sell and take the corresponding number of tokens of that good from the pile. By selling 3 or more goods of that type, the player is rewarded with a bonus token of that quantity. Bonus tokens have a random value associated with them with the possible values being:

When selling gems, gold, or silver, players must sell at least 2 cards of that type.

If a player chooses to sell more goods than there are remaining tokens for that good, they will still qualify for a bonus token based on the number of cards sold.

An additional consideration when selling goods is that the value of each good in the stack is in descending order. Players will need to balance selling goods early to get the highest value for their sale and holding on to cards to get the lucrative 5 card bonus token. Silver is the exception, with each silver token being worth 5 points.

A round ends when 3 of of the 6 piles have no more tokens, OR when a player is unable to draw a pile from the supply deck. Players then total up the values of all of their goods cards, and the bonus tokens. The player with the most camels in their herd receives the camel token, worth 5 points. Whichever player has the highest total receives a Seal of Excellence token.

There are a number of things to love about Jaipur. The art is simply gorgeous. Vivid colors, beautifully illustrated, with the pleasing style, shapes and borders of India. The contrast is high and all components are easily differentiated. 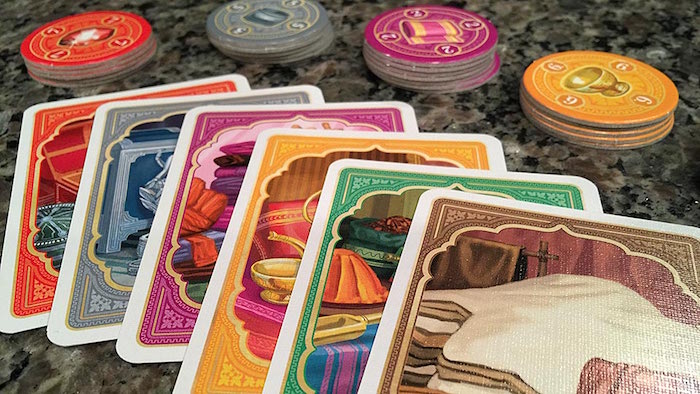 The components are of the highest quality with the cardboard pieces being sturdy and durable. The cards are thick without being hard to shuffle with a nice linen finish. The insert is one of my favorites, featuring a hot pink color and extremely well thought out recesses for all of the components. I own Jamaica, another game from Game Works (the publisher of Jaipur), and it is similarly well put together.

Turns are fast, with little down time. Rounds are generally over in 5-10 minutes, with a full game taking between 15-30 minutes.

The suggested age is 12+ but I’ve been playing this game with my daughter since she was 9 and she had no trouble learning it. In fact she’s beaten me several times.

What I Dislike About Jaipur

Honestly I don’t think Jaipur has any negatives. I’m not saying that this game is perfect, but there’s nothing that bothers me enough to write down.

The only thing I might wish for is for this to allow for higher player counts. I respect the 2p restriction and I’ve played lots of games of this with my 10yo daughter. But it would be fun to also play with more than 2. But given that this is explicitly a 2p game I can’t count that as a negative.

Jaipur is one of my favorite games. It’s easy to teach, accessible, fun, plays fast, and it’s beautiful to look at. That combination of merits makes it easy to see why it’s one of the top 100 games on Boardgamegeek.com. Get this game. Play it with people you love, play it with complete strangers. As long as you play it. I’ll leave you with this quote, in my best Baron Harkonnen voice. 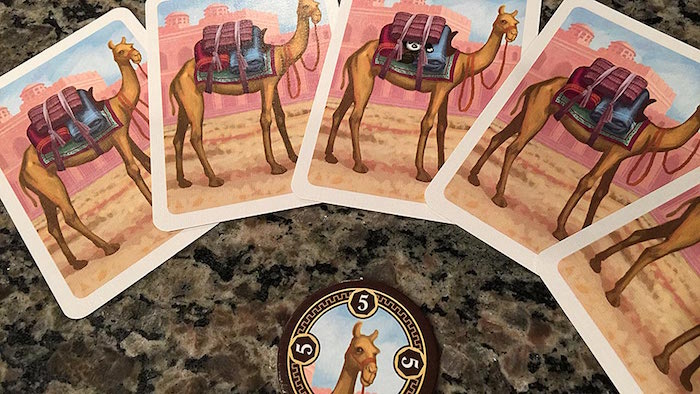