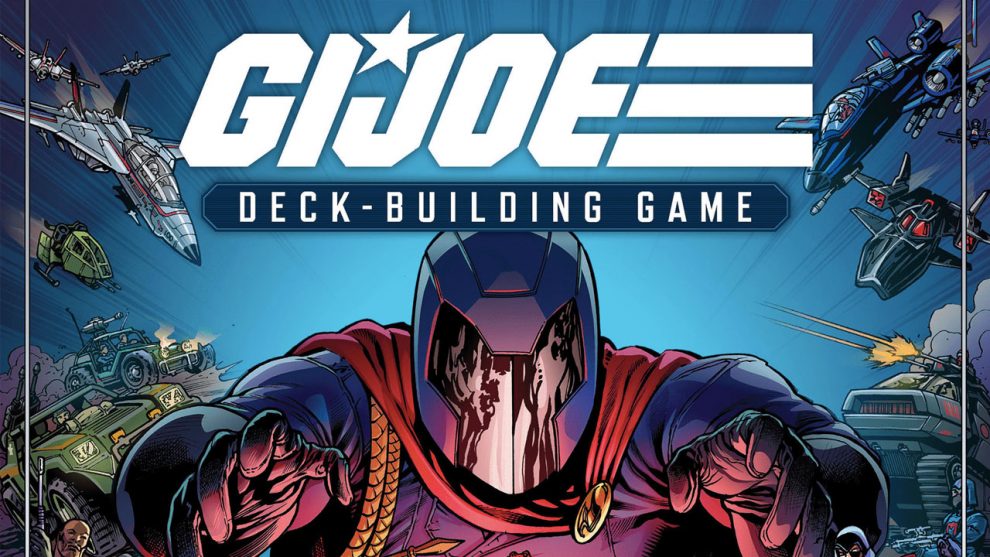 Let’s just get it out there.

GI JOE Deck-Building Game (2021, Renegade) shouldn’t be good. It has a terrible title, a poorly-written rulebook that lacks a great setup guide, and a box that is WAY too big for what comes included.

But here we are, and GI JOE Deck-Building Game IS pretty good. After a half-dozen plays, this has become one of my favorite deck builders thanks to my love of the source material.

The players who joined me for my multiplayer plays were mostly born after GI JOE became a part of the national consciousness. (I’m referring to the 1980s cartoon series, not the original military-fashioned, 12-inch-tall action figures from the 1960s.) I mention this because those players mostly have no idea who, say, Roadblock, or Destro, or Zartan might be.

A couple had seen Snake Eyes, the not-very-good 2021 Henry Golding film based on the iconic black-suited ninja character from the original show. But whenever I would utter lines from the show—“YOOO JOE!!!”, “COBRAAAAAAA!”, or “…and knowing is half the battle”—I would get the kinds of side-eye looks my kids give me as I realize that Daddy is embarrassing everyone in the restaurant. 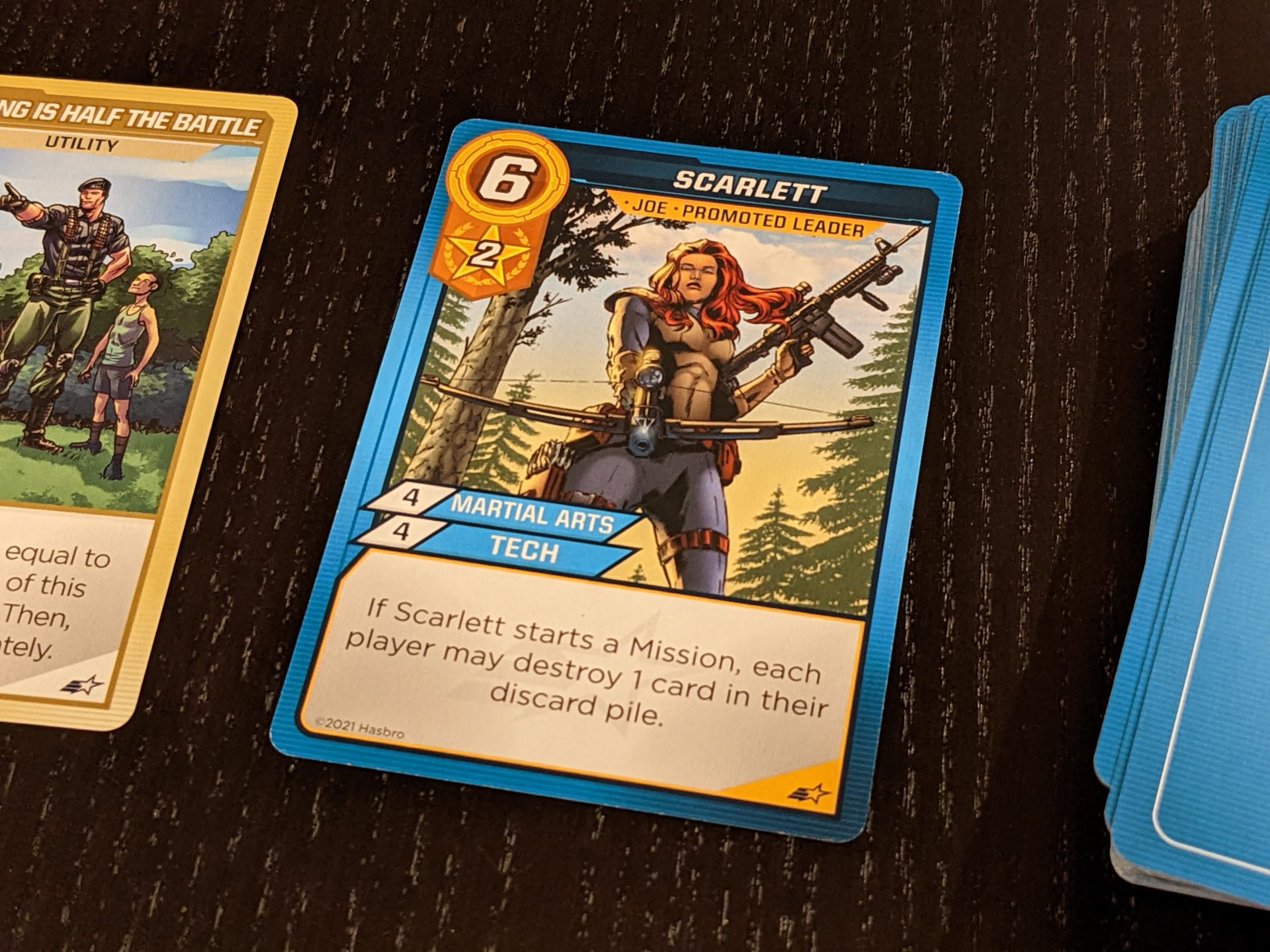 Here are the best things about this game:

Nostalgia. Look, if you’ve read even this far, I think you are of “a certain age”, and the idea of taking Scarlett, Duke and Torpedo on a mission to take down Baroness in a Skyhawk really gets your heart racing.

GI JOE Deck-Building Game has moments like this in spades. If you are smart—and because you are a reader of Meeple Mountain content, we agree that you are smart—you will play the GI JOE theme song from the cartoon in the background while playing this game. (Is playing this song on repeat for an hour the right move? Questionable, but for the purposes of this article…yes, it’s the right move.)

It’s a gateway game. You can teach GI JOE Deck-Building Game to almost any human being who has played any type of game before. The teach takes about 10 minutes for a core gamer, and maybe 15 minutes for anyone else. The concepts are also pretty straightforward: work together to tackle enemies by rolling dice, then buy new cards from a market with points from the cards played that turn.

There is no back-and-forth with fighting. The players work together to fight COBRA, but COBRA is just a punching bag. COBRA never strikes back, although it does make the game hard on you in the final third or so. Players don’t track damage. For the most part, good guys don’t get killed off during play.

And for a deck builder—see Dominion, Clank!, Ascension, etc.—GI JOE Deck-Building Game might be the friendliest of them all: 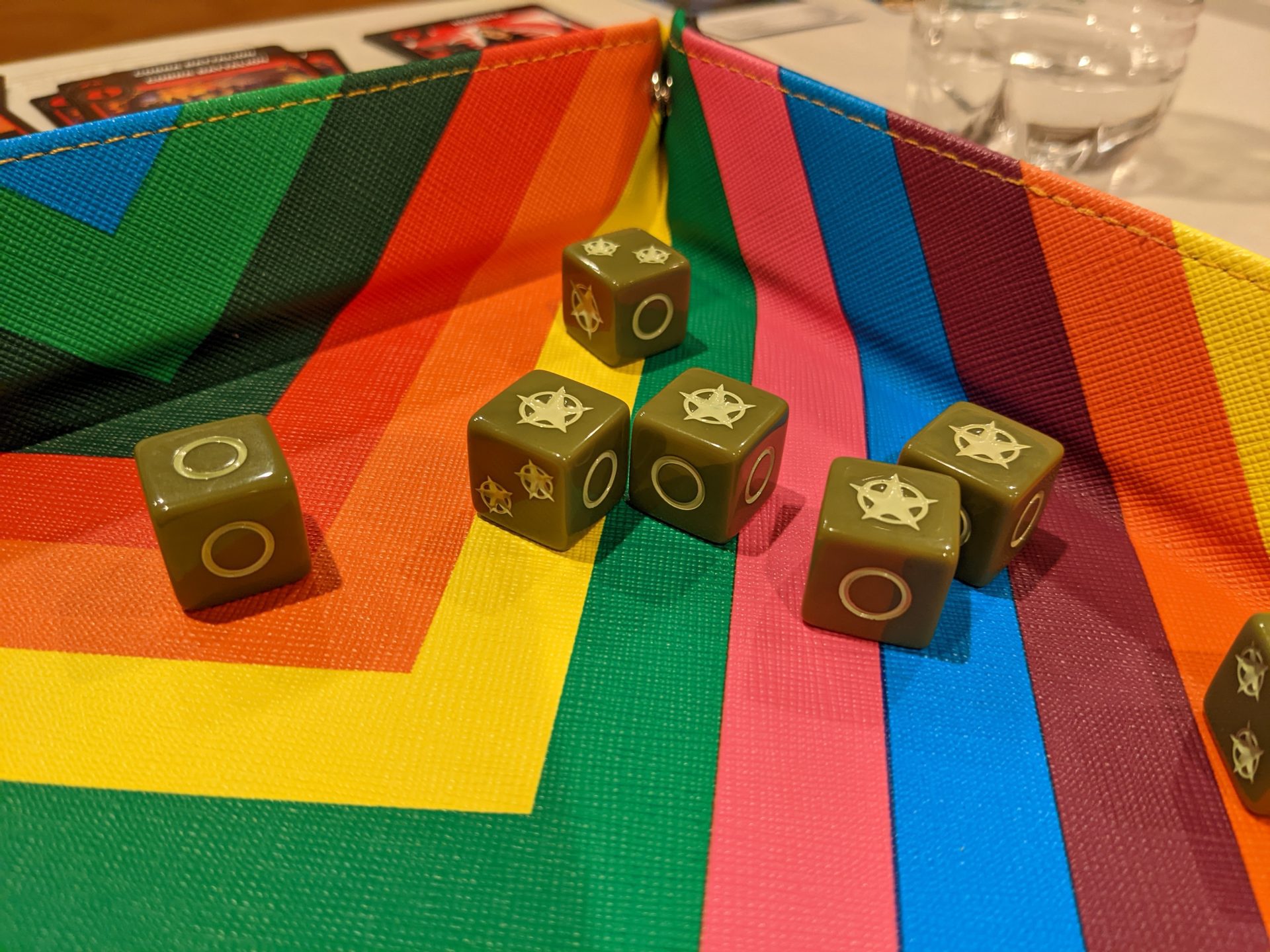 It has a sense of urgency. GI JOE Deck-Building Game’s greatest strength might be that it requires players to go hard at every enemy in their path. There’s one introduction round where players can buy cards without COBRA affecting the action. From there, it’s go time. Finding a way to cobble together enough strength to take down each Story Mission (basically, a number of hits that must be rolled to succeed or fail that mission) becomes the plan every turn.

Even on other players’ turns, you are playing. Let’s say another player announces that they want to start a fight against the current Story Mission, one of 9 mission cards that establishes a scenario that has to be beaten with positive dice rolls. You’ll have to take a green Vehicle card to the fight’s location.

Once the active player has declared the start of a mission, they can ask any other player to add Joes (character cards), up to the limit of that Vehicle card’s seating capacity, usually 2-5 Joes. Some players might have Joes; others might have Gear or Utility cards, which can help with game-breaking powers during a fight.

This means that during every turn, you are highly engaged in the outcome. Zero downtime is a good thing!

There are lots of ways to mitigate poor dice rolls. Yes, some people just hate the idea of dice. (Some of them even write for this site.) Never fear! You always have ways to add more dice to a fight, assuming you line up the right fighting force for a mission. There are tons of re-roll dice cards in the game. When you go on a group mission, other players can help with their re-roll cards. A couple of cards even let you throw out an entire bad dice roll to roll all of those dice again!!

The whole experience never overstays its welcome. You can wrap a game of GI JOE Deck-Building Game in about 75 minutes with 4 players, and a little less once everyone gets a handle on the action. Solo play is available and scales nicely; I now only play the game solo with the practice game setup of 6 mission cards instead of the full 9. That shorter stay mixed with a mechanic that in essence allows for a player to go it alone two-handed fits the bill for me. 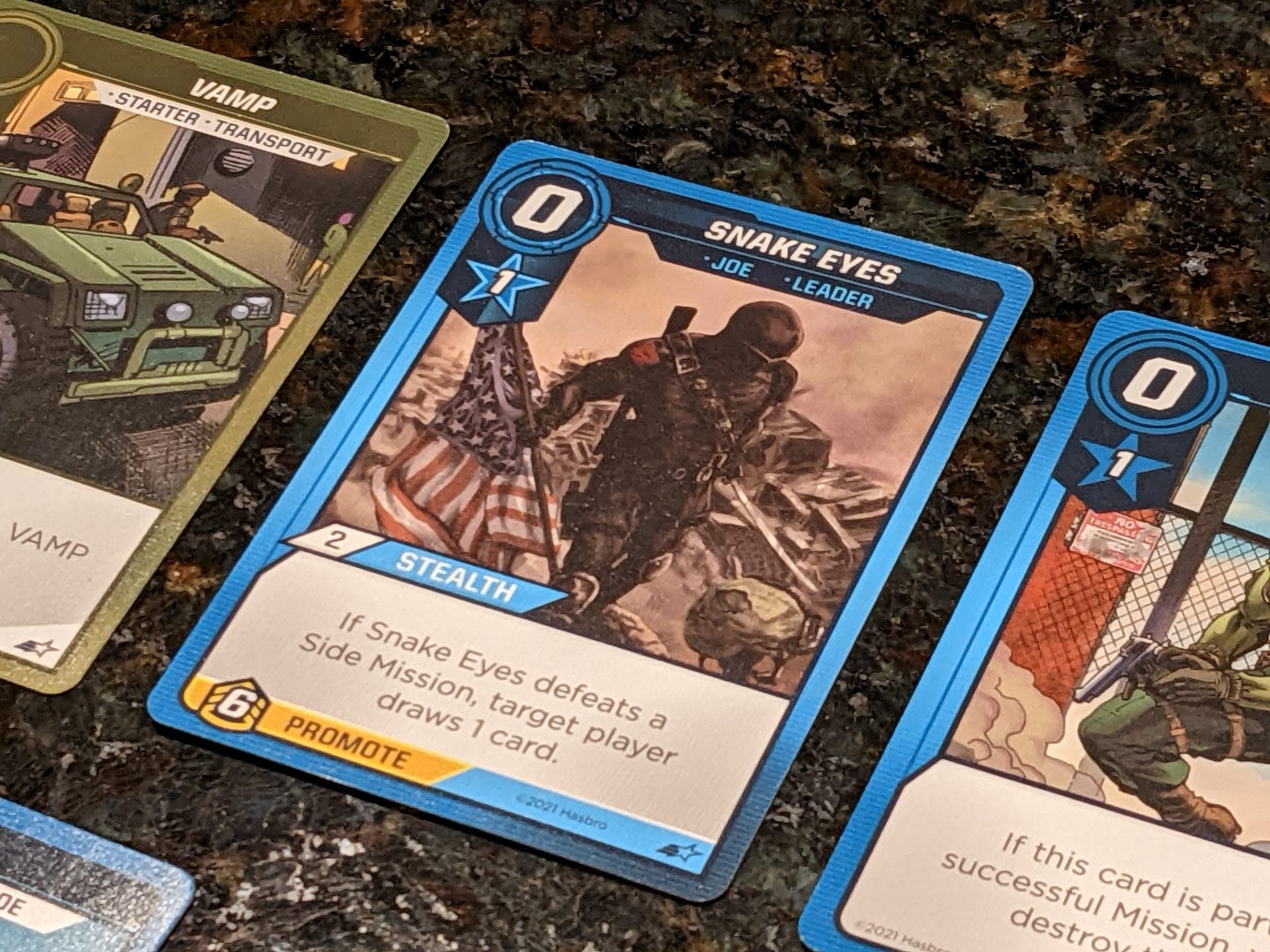 Like the name of the deck of cards attached to missions that make them a little harder, not everything about GI JOE Deck-Building Game shines.

This is a dice-chucking, deck-building game, so you are definitely going to have moments where, say, one player gets to roll 17 dice to beat a 6-strength mission, and STILL fails. Not a great feeling, or it becomes a really funny moment, since it’s a co-op game and hopefully you’ve surrounded yourself with some easygoing folks.

There is a “story”, and I use that term lightly. There are also only two missions in the box. The variety of missions is very slim; in fact, after maybe the third mission card of my first game, I stopped reading the flavor text.

All you really care about, as a player, is what skills provide a benefit during a mission, that mission’s total strength, and what vehicle can provide bonuses if taken on that mission. Once you have that, you have everything.

“OK, we need a strength of 5; who’s got Martial Arts or Explosives skills?” the active player will announce.

Swap out a couple of keywords here and there, and you have the next mission card, although it is cool to look and see if Flint, Cover Girl, or another JOE is featured on the card art.

The game, then, already needs expansion content, even just a few plays into my experience. And while I appreciate the included storage solution, this game should come in a box half as wide, minimum. It’s 200 poker-sized cards, maybe 30 tarot-sized cards, and a handful of dice.

I mentioned this in the intro, but the rulebook has a strange number of errors and misprints; heck, even the page numbers appear to be nearly cut off at times. Only a couple of cards have minor issues, but the production does feel a little slapdash. 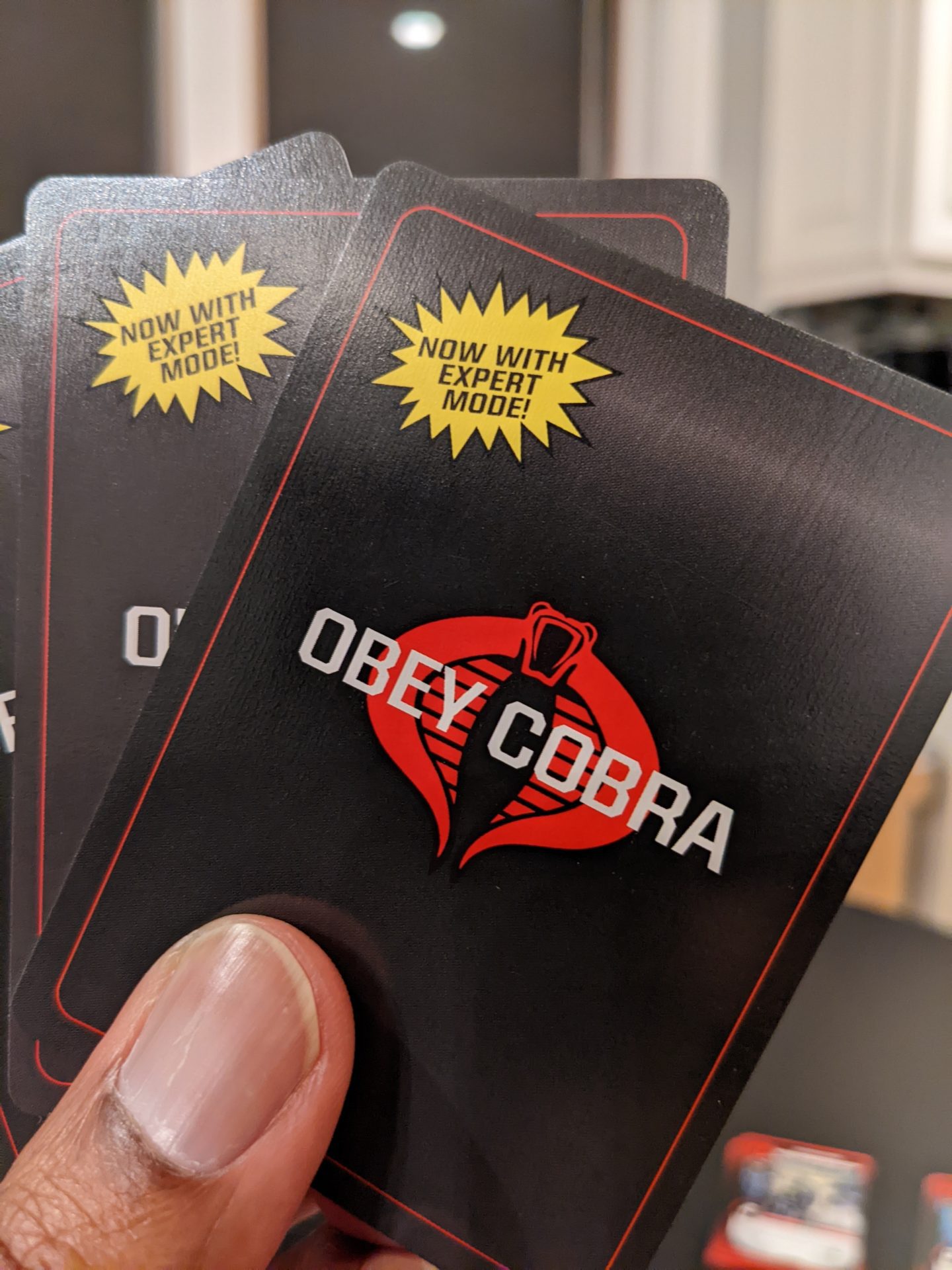 Minor quibbles aside, GI JOE Deck-Building Game is fantastic. It is the first really big surprise I’ve had with a game this year. It nails the nostalgia for me personally, the gameplay is accessible, and the play time is just right.

The game needs more content, but that’s a firefight expansion for another day. This one is a keeper! 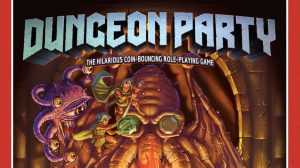 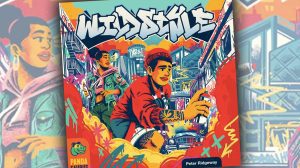 Justin tags a police station in his review of the new real-time set collection game Wildstyle! 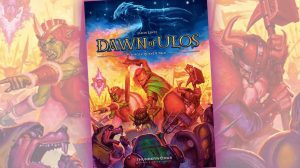 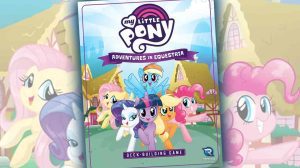