I was originally drawn to Ducks in Tow because of its cute theme. In this game players feed ducks and then escort them to their favourite spot in a park where they snap a photo with them before sending them on their way. Mechanically, it’s a pick-up and deliver game. Thematically, it’s unique and adorable.

I was also drawn to the game because of the fact that it was designed by a woman, something that’s still too uncommon for board games (unless they’re about birds). It’s always nice to see women flying to new heights in a male-dominated industry. 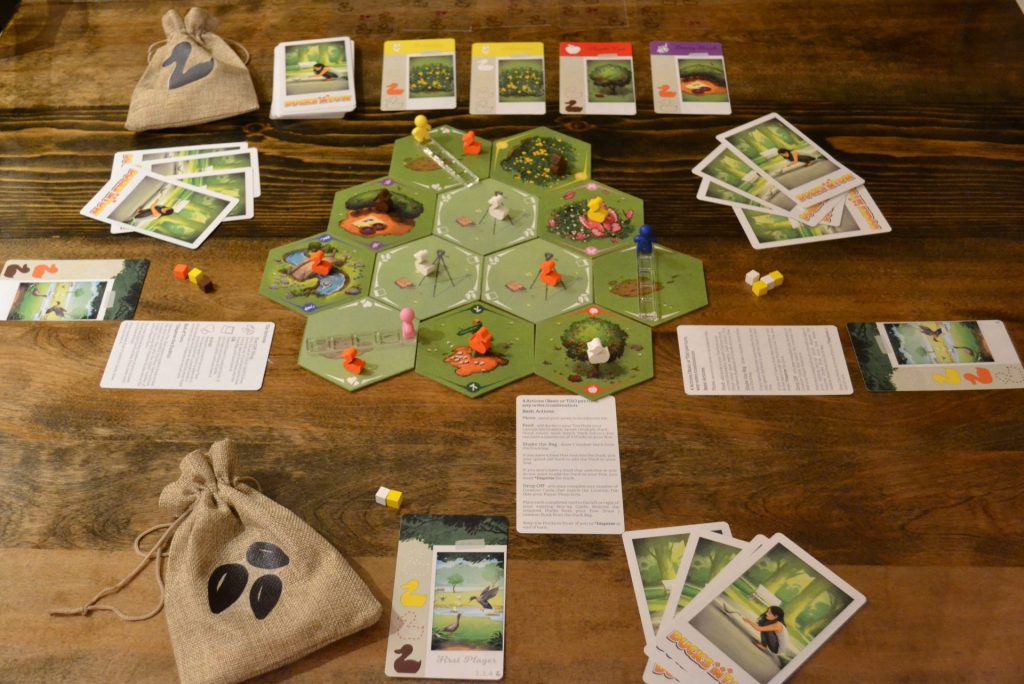 In this picture, the game is set up for 3 players.

In Ducks in Tow, players will be moving around the board, adding ducks to their tow (pictured below) and using these ducks to fulfill secret objective cards that they have in their hand. To do this, a player gets to take four actions on their turn. There are two kinds of actions — Basic or Tile — and players can do any number of them in any combination. 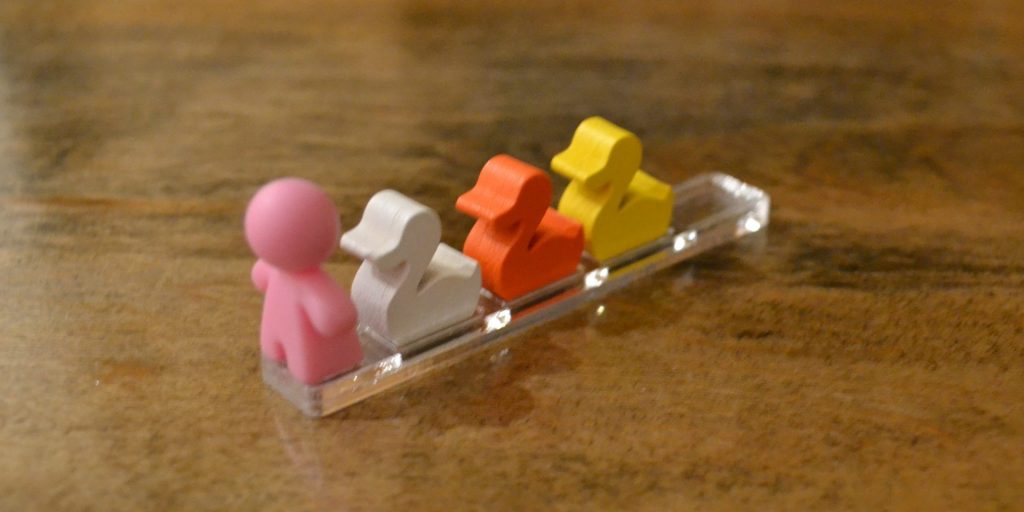 Whenever I refer to a player’s tow I’m talking about these four spaces that each player piece has for holding ducks. I think this is adorable and a lot more fun than simply having a card to place your ducks in tow on. 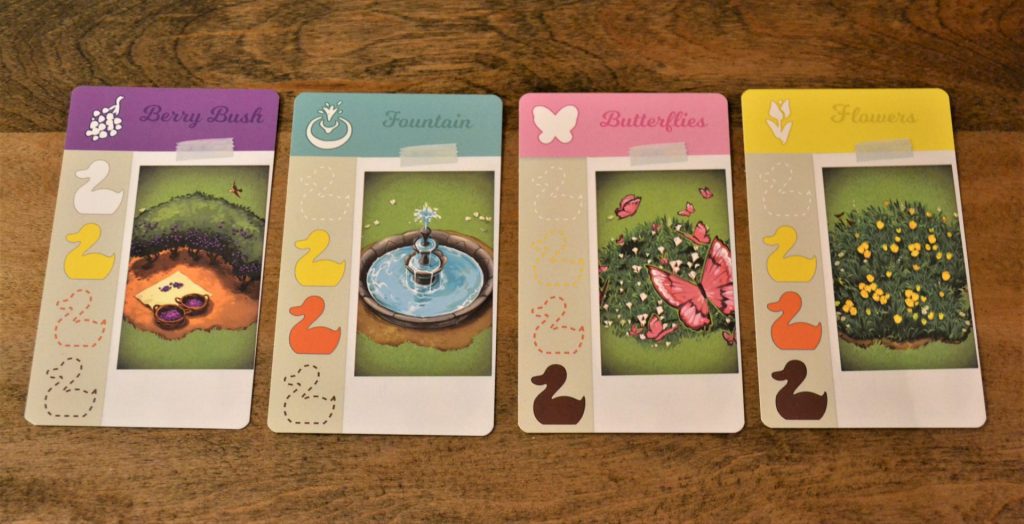 The last two possible actions are “Tile Actions” and can only be performed on the corresponding tiles. They are:

After a player has completed their four actions they do the following:

Players score points based on the Location Cards they fulfilled and the ducks they adopted. At the beginning of the game, each player will start with one card in front of them. After each Drop Off action, they will add cards to either end of their row of cards, much like creating a route in Thurn and Taxis. These cards cannot be rearranged. This is important because players will score points based on how many ducks they have in a row. Each colour of duck scores based on how many are in a continuous row. 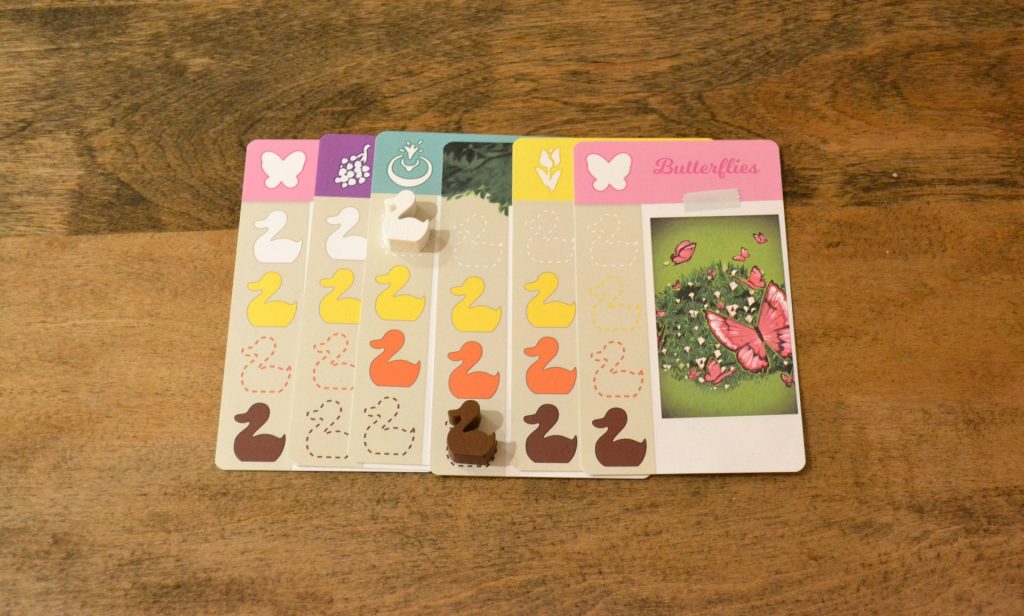 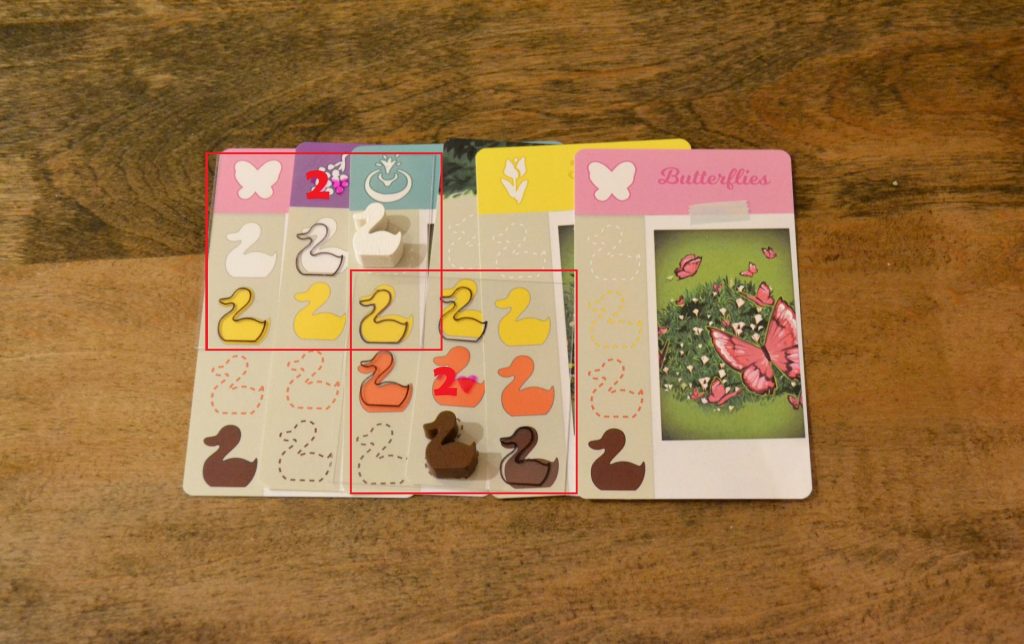 In this example the players has claimed two Formation Cards worth 2 points each.

Ducks in Tow reminds me of both Splendor and Takenoko; for a light-strategy game this is pretty high praise. The Formation Cards are similar to the nobles in Splendor, and the board interaction and secret objectives remind me of Takenoko. Not to say that the game isn’t unique; it certainly is. My point is just that if you enjoy these games, I think you’ll probably like Ducks in Tow as well.

The simplicity of the setup and gameplay means that the rulebook is short and easy to read. It’s also organized well so it’s easy to quickly reference if you have a question. Not that you’d need to, because the game comes with very comprehensive player aids. The only thing that could improve these player aids is if the steps at the end of a player’s turn were numbered. This would make it easier to quickly reference what step comes first. 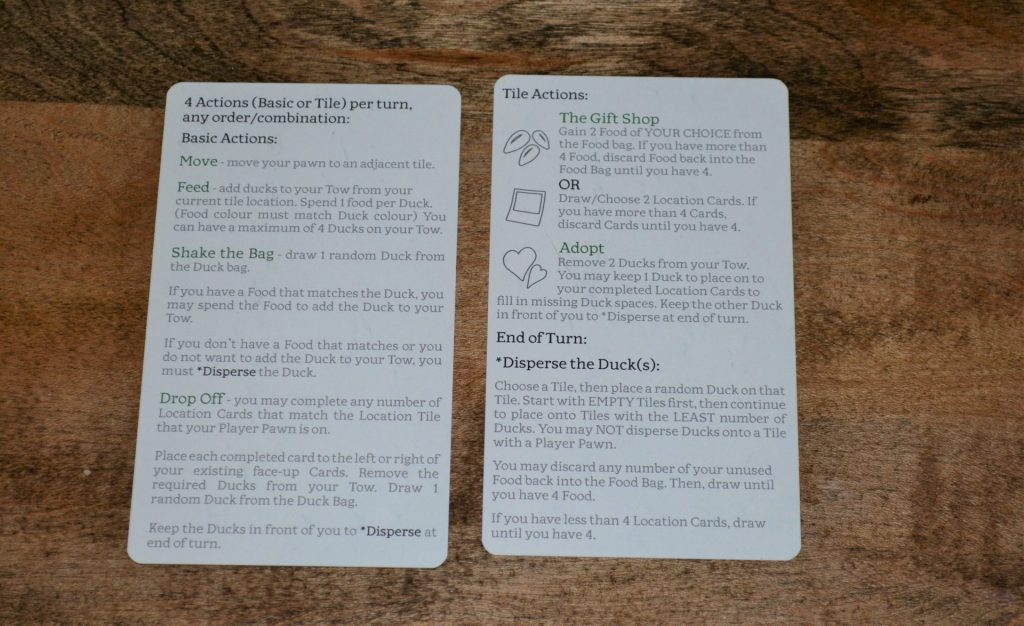 The components of this game are great; I love that each player piece has the perfect spot for each duck they have in tow. The burlap bags for ducks and food are attractive and functional;  a very nice touch. Finally, there are duck meeples! I think that says enough. My only complaints are very minor: sometimes the ducks fall off of the player piece when they’re moved, and the box is quite a bit larger than it needs to be (a pet-peeve of mine). These things could easily be fixed, and may well be since Ducks in Tow is live on Kickstarter now. Even with these minor flaws, I’m quite pleased. I’m a sucker for good components and, if the Kickstarter copies are the same quality as the copy I received, I’m pretty sure no one will be disappointed with them. 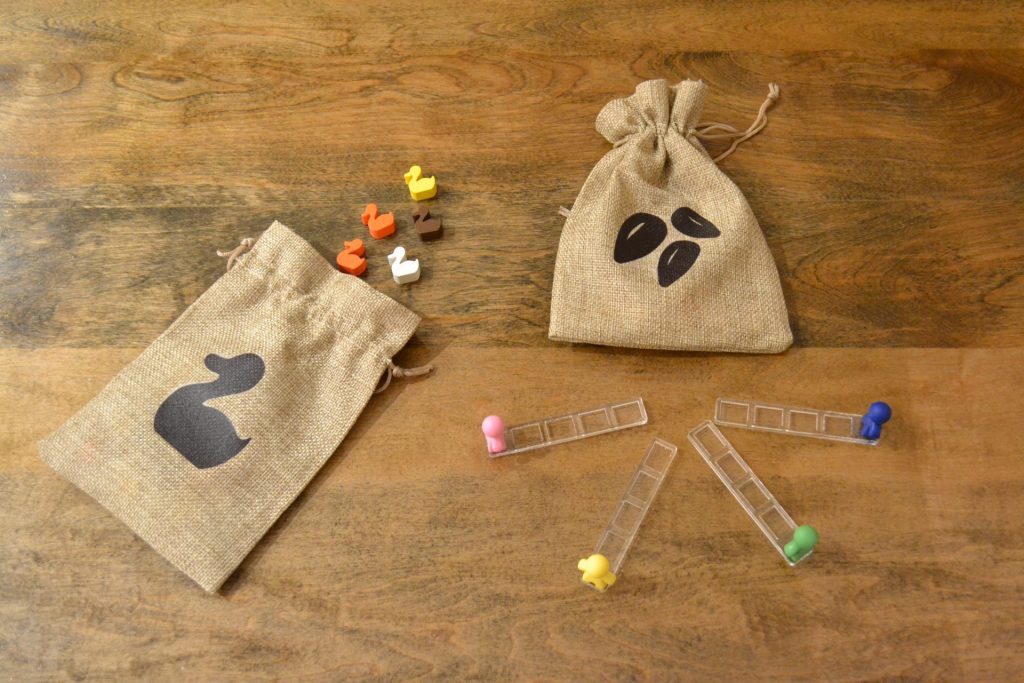 As a final note for my sanity, I will mention to anyone inspired by this game’s adorable theme that if you want to feed ducks, please don’t feed them bread. In fact, it’s best to just leave them alone and get your duck feeding thrills from Ducks in Tow. It won’t disappoint!

Designed by women   Kickstarter   Women in board games