In the world of board games, fantasy games are pretty much a dime a dozen. Plenty of games let you fashion yourself as the chivalrous hero, venturing forth to slay the dragon or the evil wizard. However, it’s more of a rarity to cast the players as the evil villains at the root of all the problems, and that’s exactly what makes Dragsoncales stand out from the moment you open the box. Playing a villain is more fun than playing the hero anyway because you get to steal from — and stab your friends along the way. 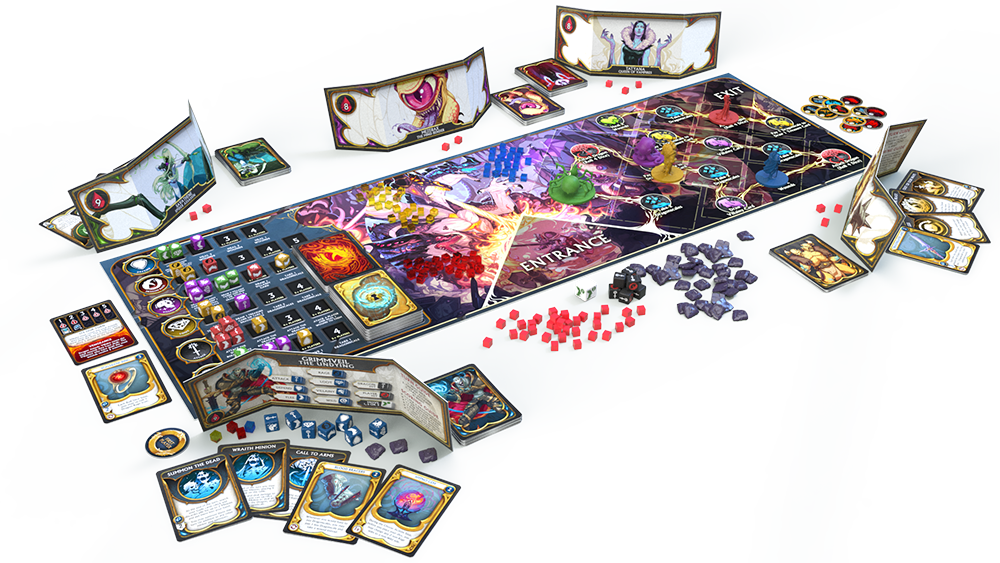 The premise of Dragonscales is quite simple: you take on the role of a nefarious villain who has decided to conquer their ultimate goal: taking the hoard of treasure guarded by the Lord of Dragons, Archerex. This three-headed beast is vicious and threatens to end your vile career if faced alone, so you’ve formed a tenuous alliance with other evildoers in an attempt to finally overcome your biggest challenge. The end goal is to either slay the dragon and take the treasure, or sneak out of the dragon’s cave while your allies are preoccupied, leaving them to get eaten while you make out with what treasure you can.

It’s because of this straightforward premise that Dragonscales manages to succeed in delivering a unique gameplay experience. You and the other villains technically need to work together, as nobody can do it alone, but there’s always the constant allure of the easy exit. You can play cards and abilities to wound your fellow villains or steal their resources, otherwise crippling their ability to defend themselves or get treasure. The “take that” gameplay works well against the very tenuous cooperative elements of the game to create a tension that carries through to the very end.

How to Slay Your Dragon

Dragonscales takes place over the course of four rounds. In the first round, players will roll their seven six-sided dice. The dice have symbols on each face to indicate actions like defending, looting, attacking, villainy (drawing villain cards or stealing from other players), fleeing (running for the cave’s exit), and dragon rage (the dragon attacks). Each player may reroll dice up to two times for a total of three rolls. After all players have locked in their rolls, everyone reveals and places their dice on a big action grid.

The action grid elevates this from being another basic action dice game by adding another layer of competition. As players place their groups of dice on the action grid, if another player places more dice on the same track (e.g., if you played two defense dice, but someone else plays three) they bump you down the track a space, which decreases the rewards you get from taking that action. Villain cards that are specific to your character can influence the positioning of dice on the track to either help you or hurt your opponents. Wild dice can let you gain that one extra die you need to take the lead on a given track. 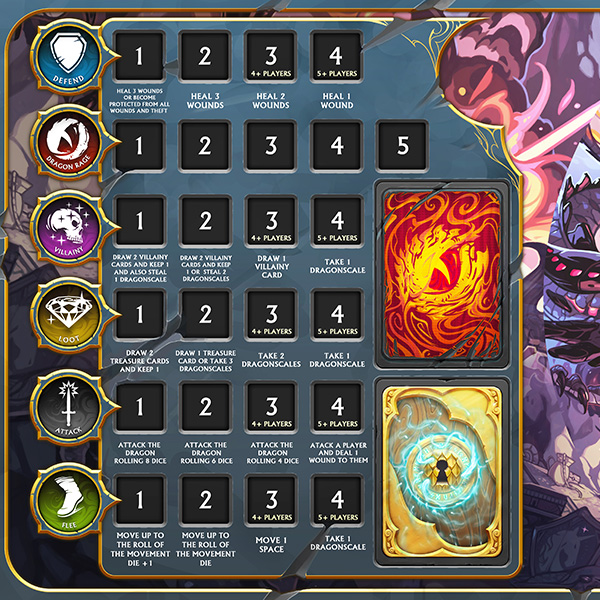 The action board is where the core competitive gameplay happens.

Once all dice have been placed, it’s time to execute actions! Some of you may gain health, some of you may sneak away with a treasure or two, and some of you will face the wrath of the dragon. Attack one of the dragon’s three heads and receive wound cubes to show how much damage you’ve dealt to Archerex. Flee from the dragon across the pathway to the exit and take actions depending on what space you land on. No matter what action you wind up taking, in some way, you are inching closer and closer to victory. Once Archerex is dead or someone has escaped, final scoring is triggered. Depending on the endgame condition, different bonuses are handed out for different feats. If Archerex was defeated, for example, the person who dealt the final blow gets a bonus. If someone escapes, the person furthest from the exit receives a penalty. In this sense, there’s a delicate balance you have to keep in mind, because if you’re too focused on your victory scenario and someone surprises you by ending the game a different way, you could be eating a penalty that’ll take you from first to last.

Some of the most immediate qualities of Dragonscales that stand out are the artwork and component quality. The plastic dragon scale tokens, used to activate treasures and villain abilities, have a satisfying “clink” as you play with them, like poker chips. These pieces should be under consideration for top irresistibly touchable game pieces. The artwork is top-notch, with big, bold designs featuring a fantastic assortment of colors. The individualized player dice are made from different color schemes, all of which match the design and vibe of the villain you play as.

The character design is both a strength and a weakness of the game. Most of the five characters are wildly different and fully realized in their visual design. Tor’lok the Unconquerable is a muscular, two-headed giant, and his visual design tells you all you need to know: this guy smashes things, and he smashes them very hard. Grimmveil the Undying is an undead lich who can raise things from the dead to help him. However, it is not readily apparent what “lane” some characters are in, and thus it can be disappointing to play them. Mezerax the Mind Bender is a legally-distinct-enough-to-avoid-copyright-claims version of a Beholder. But… what does that mean for gameplay? It’s not obvious until you’ve cycled through enough cards in his villainy deck, something that can take a sizable portion of the game, depending on how lucky your rolls are. 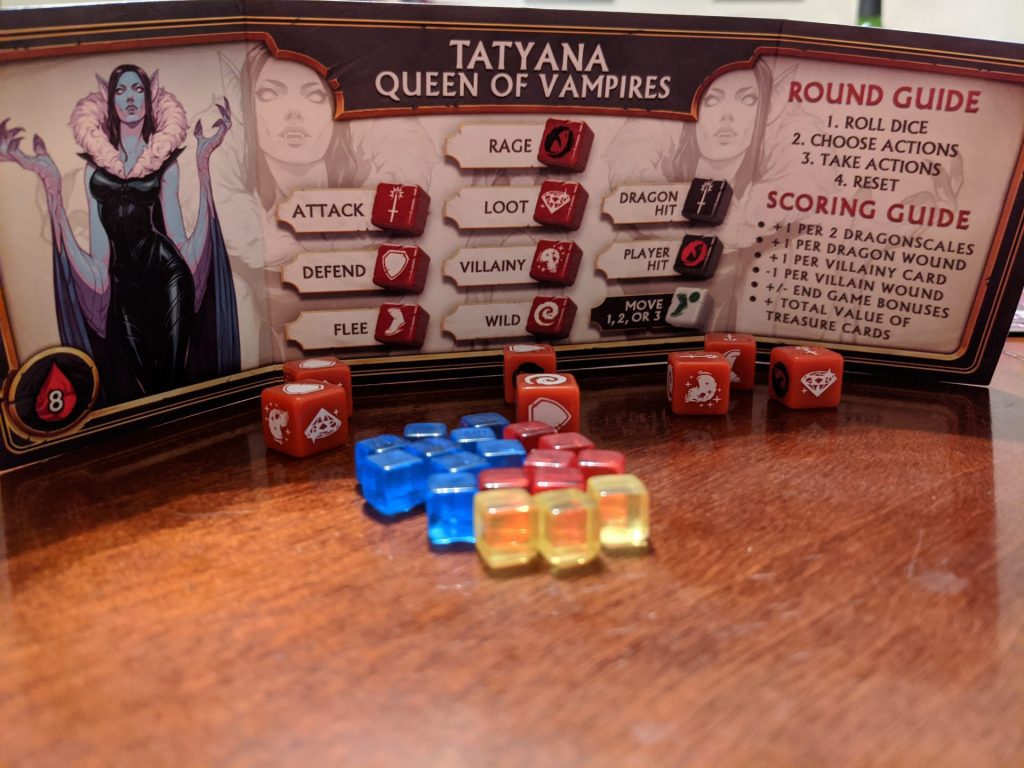 Tatyana the Vampire Queen plays by taking damage and transferring it to other players.

It’s hard not to draw comparisons to Dice Throne when playing Dragonscales, and when comparing these five villains to the wacky and distinct cast of Dice Throne, the villains of Dragscale all blend together more than I would have hoped. Even the seven dice each villain has at their disposal are all just the same dice faces, providing very little insight into what each character’s niche is. Perhaps the most fun moment of our first playthrough was, after the game concluded, excitedly reading what the rest of our cards aloud did to get a better picture of how each character is supposed to be different from the others. Some of it was great, like figuring out the Vampire Queen wanted to take damage so she could transfer it to other players and had one of the only direct ways of damaging other villains. Some of it was disappointing, like seeing a similar ability printed across two or three different villains or treasure cards, which made them all feel even less distinct.

At the end of the day, there’s a foundation here for fantastic gameplay. There were many moments people at my table audibly gasped or said “Whoa, cool” after reading what their new villain card did. Nothing felt quite like rolling eight attacks on the dragon and hitting with seven of them, or accurately guessing how many wounds each other player has to make sure you damage the correct head for a bonus. Keeping an eye on that sneaky little traitor inching closer and closer to the exit so you can merrily stab them before they can escape really gets you into the villain spirit.

While there was a lack of clarity around each character’s “specialization” within the broader context of the game, and some of the ability cards fell flat for us, there’s more than enough to love here. By the time we were wrapping up our first game, we were all already excitedly chattering about different strategies to try in the next game we played. It’s a game that relies heavily on dice rolls and card draws, but as someone who usually hates randomness in board games, Dragonscales was such a magical experience that I learned to stop worrying about RNG and love the gleeful chaos of being a villain.