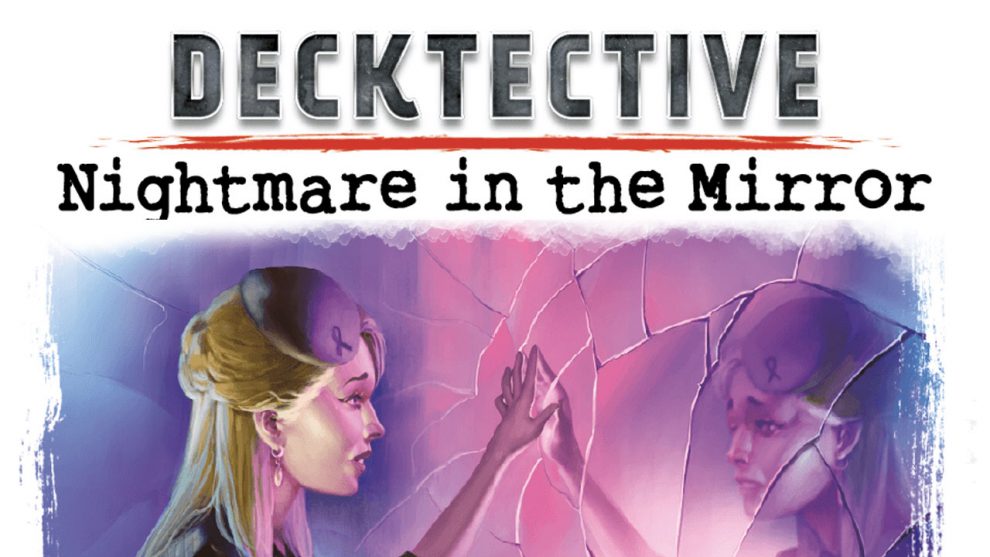 Ian Howard @RealLeafyDragon
Add Comment
Looking for a mystery that’ll get brains burning and conversation flowing? Read Ian’s review of Decktective: Nightmare in the Mirror to see if you can crack this case.

In this review anything that might be considered a spoiler is hidden in a collapsible window with a spoiler alert on it. In all other ways, this review is spoiler-free.
Detectives, we need your help: there’s been a kidnapping! Our only clue so far is a mysterious photo sent by the victim, Danielle Dove. We’ll need you to investigate locations that might be connected to Danielle, interview witnesses — or suspects — and separate the hot leads from the red herrings before it’s too late.

Decktective: Nightmare in the Mirror is a small-box co-op mystery game that’s playable in under 2 hours. While it can only be played once, it can be reset for other would-be sleuths to use without any serious issues. The game itself consists of a box, a numbered deck of cards, and a handful of plastic clips. The deck will provide both instructions on how to proceed through the game as well as information about the case at hand. At the end, the players will be collectively scored on their understanding of the mystery, with points awarded for correct solutions. Can your group get all the possible points and crack the case?

If you’ve already read our review of Decktective: Bloody-Red Roses, you’ll have an idea of what to expect from Nightmare in the Mirror. The setup and gameplay is extremely similar to the previous Decktective titles, so I have taken much of the following description from my colleague Ashley Gariepy. If you’re familiar with the basics of gameplay, you can skip ahead to my final thoughts.

How to Play Decktective: Nightmare in the Mirror

Next, players secretly draw 1 card at a time in turn order until everyone has a certain number of cards in their hand depending on the player count. It’s important to draw cards one at a time because each card in the deck is numbered sequentially and the order of these cards must remain unaltered.

Since this is a cooperative game, you might have guessed that there are some rules when it comes to communicating about the cards in your hand. Players can neither show nor discuss the information on their cards, nor can they take any notes, but they are allowed to read the card’s title to the other players. These rules are important because a large part of Decktective: Nightmare in the Mirror is deciding which cards to reveal — for all other players to read and discuss — and which cards to toss, effectively removing them from the game.

Each card is numbered from 1 to 10. To play a card from your hand, its value must be equal to or less than the number of cards in the archive. Playing a card face-up to the table means that you have determined it contains useful information that you think the other players should know too. Of course, there are cards in the game that are less helpful — perhaps they lead players down the wrong path or simply don’t add meaningful new information — so you’ll want to discard these. The kicker here is that you can’t discuss any information from the card you discarded until the end of the investigation.

Spoiler alert: Click here to learn more about the cards with a twist. 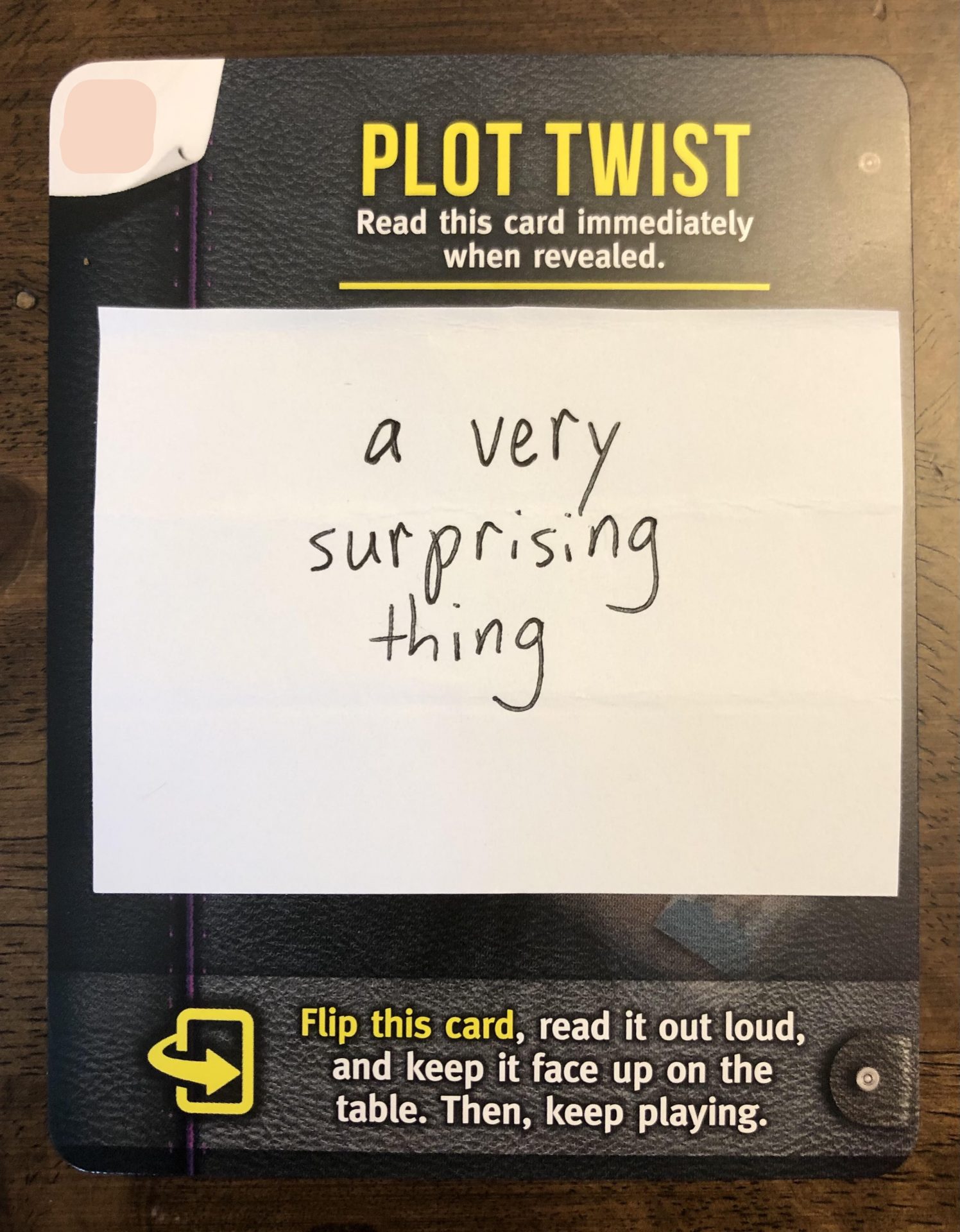 At some point in the drawing, playing, and discarding of cards, players will stumble upon the Case Closed card pictured below. This prompts the end of the game and the investigation. 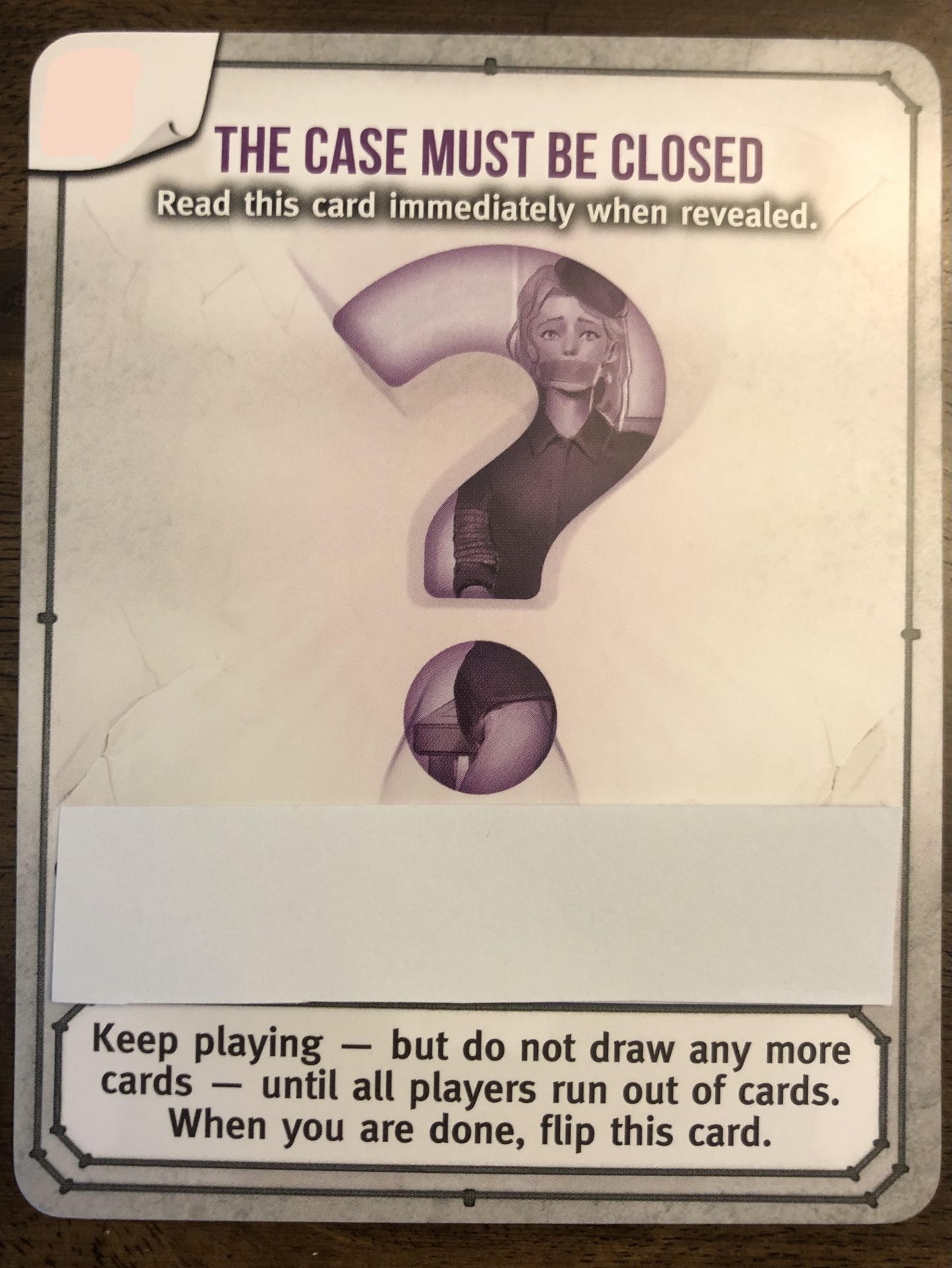 After this card has been revealed, players continue taking turns as normal but do not draw any further cards. When everyone runs out of cards, players must move on to solving the case. From here on, players are allowed to freely discuss their theories about the case and any evidence that appeared during play: crucially, this includes any cards that were archived — though players must hope they remember those cards correctly, as they are still not allowed to reveal or read them.

Once players feel ready, they submit their solution by answering questions across a final series of cards and using the included clips to indicate their answer on each card. At the very end of the game, players flip the question cards over to see whether the clip marking their answer matches up to the correct answer shown on the back. Getting the right answers is the main point of the game. However, it also includes a scoring system based on the number of correct answers given, which might be fun for bragging rights among players who pass the game on to their friends. 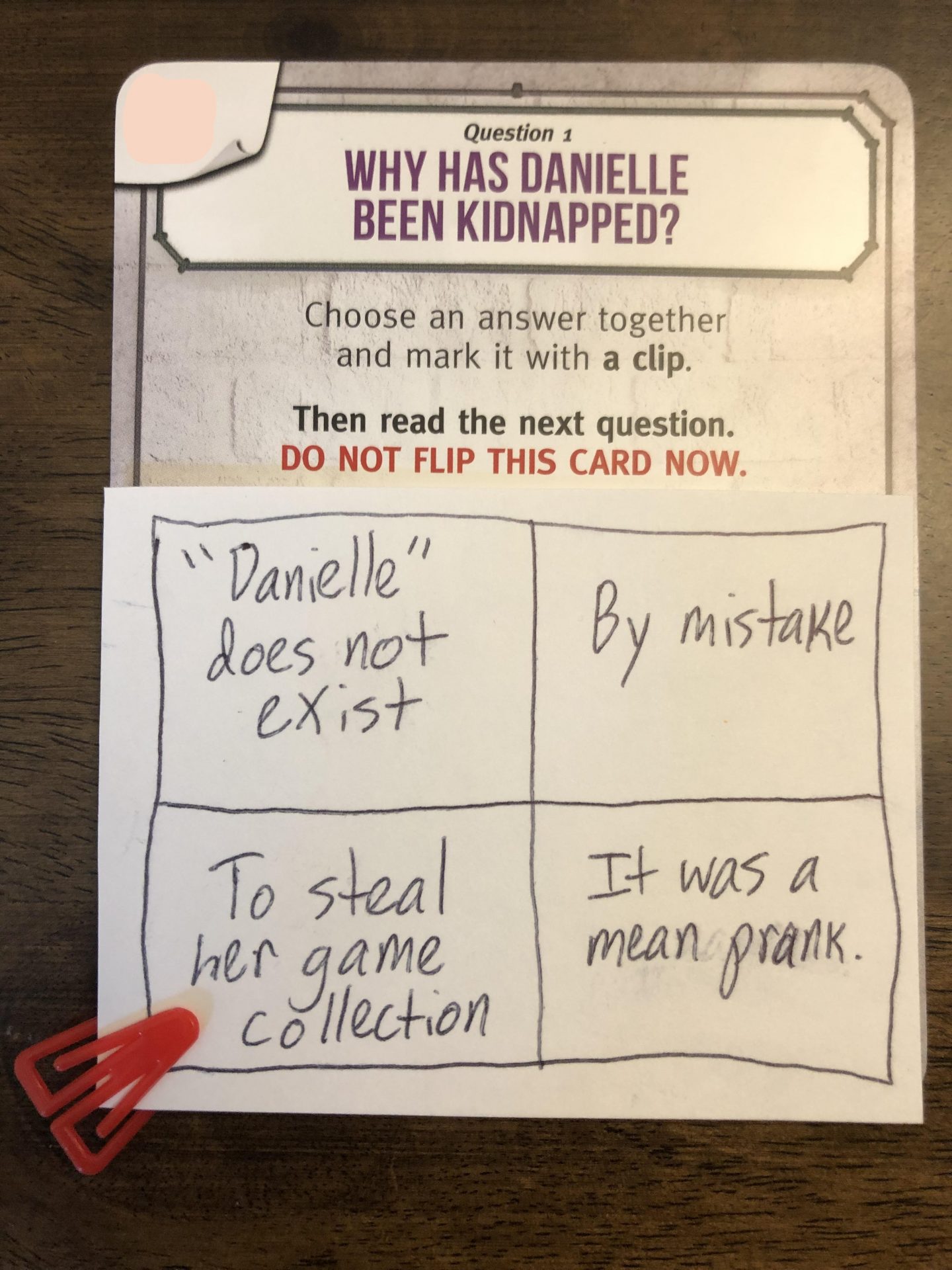 The back of every question card not only has the answer, but also an in-depth explanation and the cards which would have led players to the answer. While it’s possible to get the right answer by guessing or without having the full understanding, it’s not easy: there are enough seeds planted to support any of the answers that players are more likely to choose wrongly if they haven’t put all the pieces together. 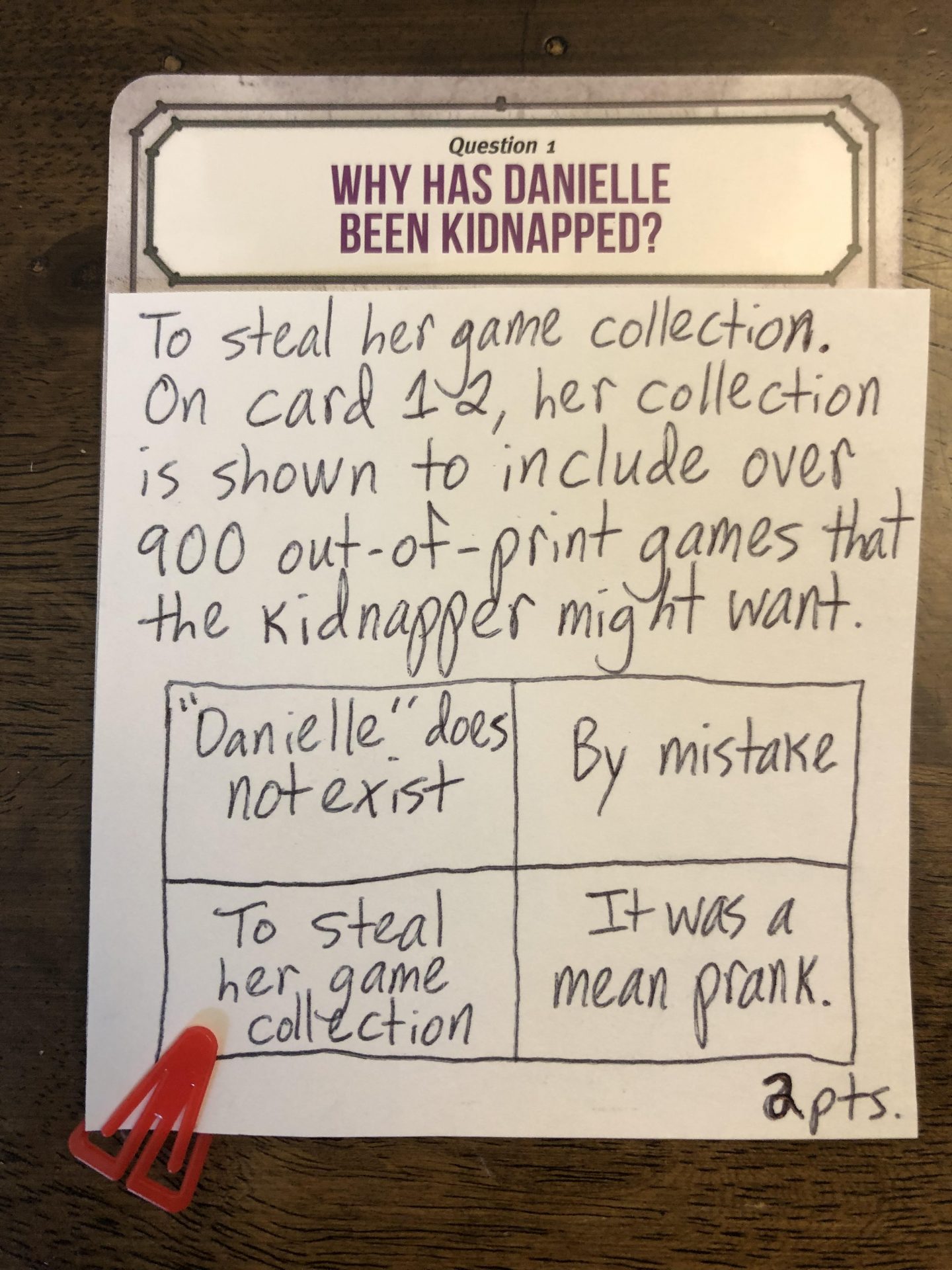 We had an absolute blast playing through Decktective: Nightmare in the Mirror. The basic system of relegating cards to the archive versus playing them face-up works well. On a few occasions we had to discard a potentially useful piece of information in order to openly share something more crucial. However, the loss of one card is almost always offset by a major revelation that keeps the case moving steadily along.

While I can see how the limited communication aspect might not work for some players, I really enjoyed it. Since the crime in question is time-sensitive, it felt like we were strategically choosing which leads to pursue rather than simply hiding information from each other. What starts as a fairly mechanical process quickly becomes second nature as the narrative begins to build. And let me tell you: that narrative is a doozy!

Nightmare in the Mirror feels almost like a crime thriller movie in the way it plays out, with plenty of sharp twists and turns throughout. It’s amazing how effectively a single card can suddenly redirect the investigators onto a completely different path. There are some great red herrings mixed in as well, which keeps players on their toes about which cards to trust. Playing a card face-up and building onto the information it provides only to later discover that it was a misdirection is a game mechanic that could feel frustrating. However, I found that it felt very satisfying. There’s a real sense of detective work as hunches become confirmed or players struggle to incorporate new evidence that conflicts with what they already know. This is doubly true when one player knows something the other doesn’t, but can’t openly discuss it due to an archived card.

Unfortunately, while I thoroughly enjoyed the gameplay and the story, I did feel this case was fairly solvable given enough time. I wouldn’t go so far as to say it was easy or straightforward, but players who stay actively engaged with the clues will probably get a good idea early on of what to pitch and what to keep. There are a few cards which feel particularly crucial and a handful that feel almost irrelevant, and I felt that those choices were a little too obvious in some places for my taste. Many of the clues can be found or interpreted provided the players themselves aren’t rushing or slacking off. Of course, a single mistake could make the difference between closing the case or dropping the ball, so it’s very possible that your group might have a radically different experience.

Whether or not you solve the central mystery, I think there’s enough fun in this tiny box for me to recommend it to all would-be investigators. When I reflect on our playthrough, I think what I enjoyed most was the excited chatter as we closed in on the culprit…and the sudden shock of reinterpreting a clue we’d thought long-solved in a way that undid all of our previous assumptions. That’s the kind of magic moment I look for when I play games, and if Nightmare in the Mirror is any indication, I’ll be finding a lot more of those moments in the Decktective and Deckscape series.

Decktective: Nightmare in the Mirror details 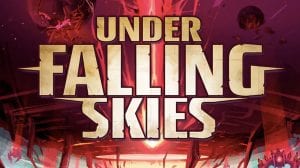 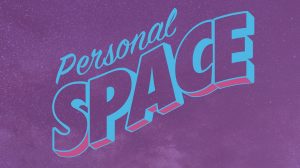 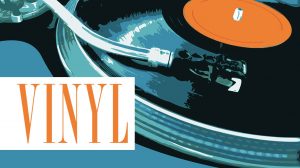 Vinyl is a set-collection game about finding the best records in the store. Tune in to our Vinyl review to find out if it’s a chart-topper or a one-hit wonder! 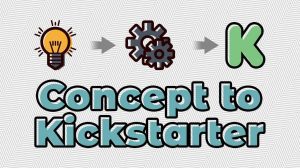 From Concept to Kickstarter

If you’ve ever wondered what it’s like to sign a game and have it published, read along as Ian reflects on the process that took him from an initial concept to...