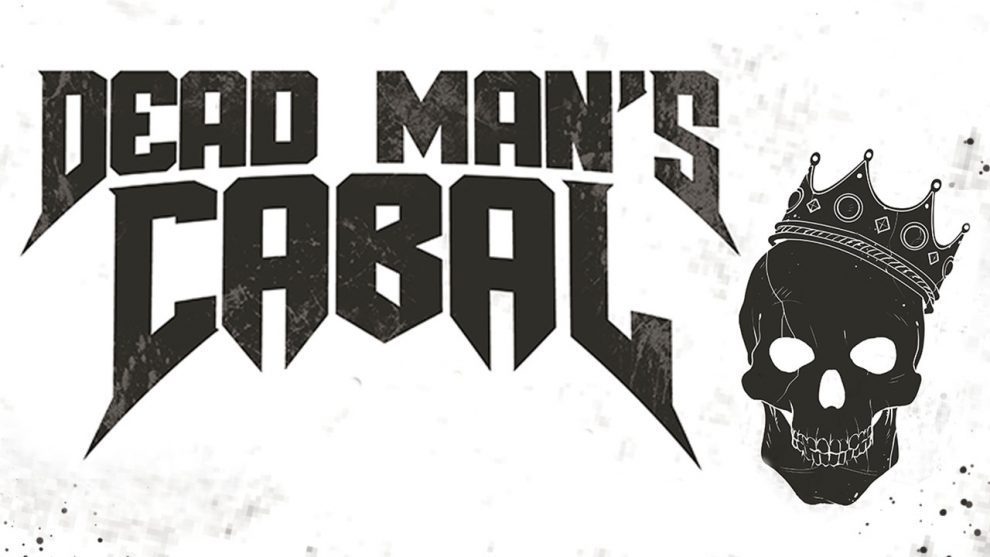 Tyler Williams
Add Comment
What is a lonely necromancer to do when none of his friends RSVP to his party?  Raise some new ones of course! Read our review of Dead Man’s Cabal, a delightfully dreadful game of dark magics, undead, and party hats to see why it is such a graveyard smash!

Have you ever wanted to throw a party but just could not get enough friends to fill your crypt?  Yes, it’s a common problem we all have. Dead Man’s Cabal allows you to play out the logical solution to this problem, which is to simply resurrect corpses to fill out your guest roster.  Of course, seeing as how everyone is raising the dead these days you will be competing with your fellow necromaalncers to see who can throw the best undead bash of them all.  Let’s get summoning! 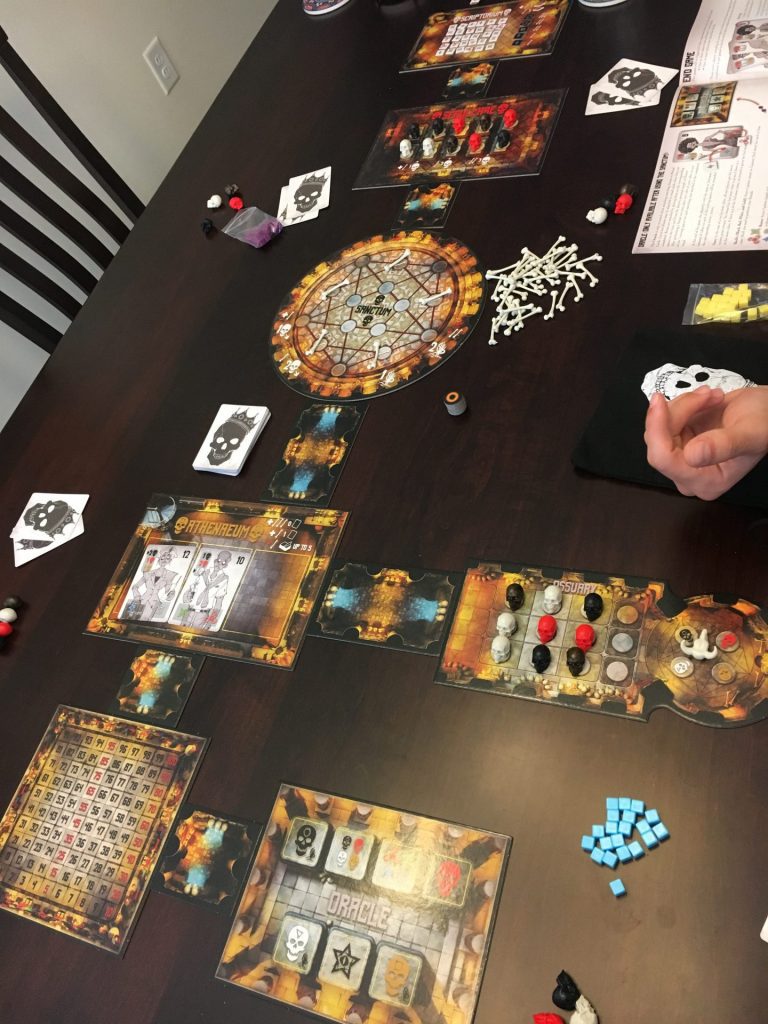 The How-To of a Taboo

So how do we go about our ritual party planning? Dead Man’s Cabal plays over a series of rounds where the active player takes an action that then allows all players to take another action.   This ingenious system of “I do a thing, we do a thing” is great and keeps downtime to a minimum. 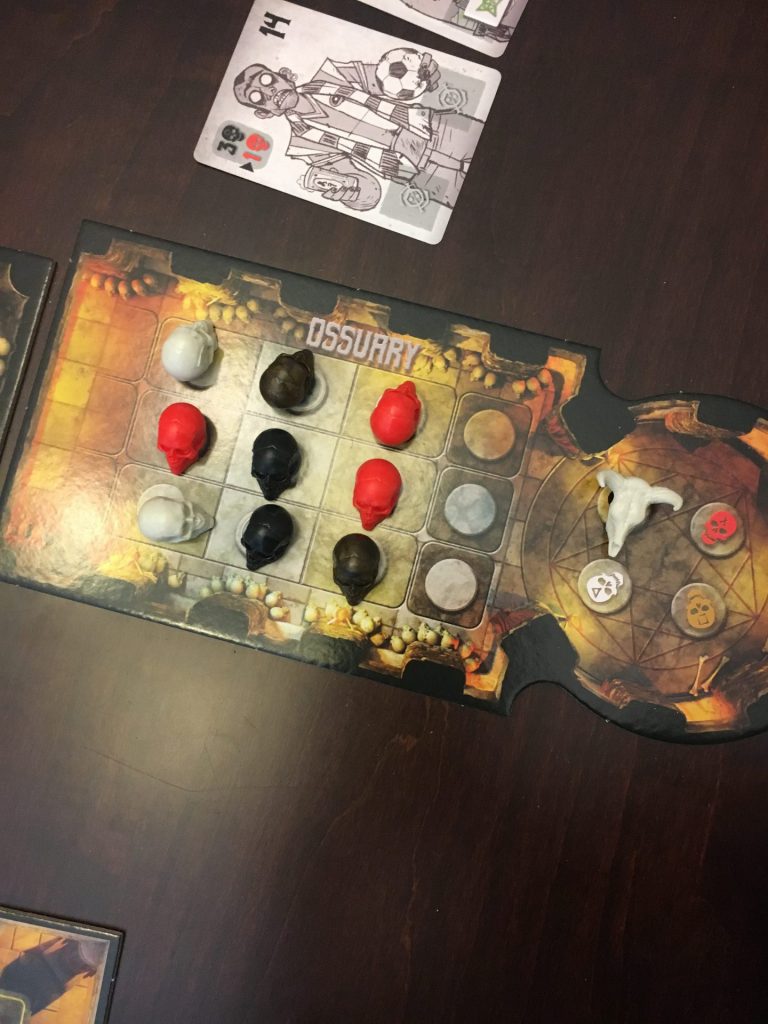 One of my favorite mechanisms in Dead Man’s Cabal is the action selection system, which, as the name and theme implies, is pretty dark (and awesome!).  On a player’s turn, they will go to the ossuary to determine their actions. There, they will slide a row of skulls by placing one on a row and taking one into their inventory.  This “sliding” system” lets you know what personal action you can take. This is something only you will do on your turn. After that action is complete you will return to the Ossuary and look at the center row of skulls to see what color is the majority in the center. This will determine the action you and all players will take at the time.  The added catch is you can never select the same action that was just selected. Therefore, you must plan accordingly to maximize your turns.

I’ve Got a Bone to Pick With You!

Like every cleverly disguised Euro, the actions are where the magic happens. Working from the top down, there are four main actions you will be taking to prepare for your macabre festivus. 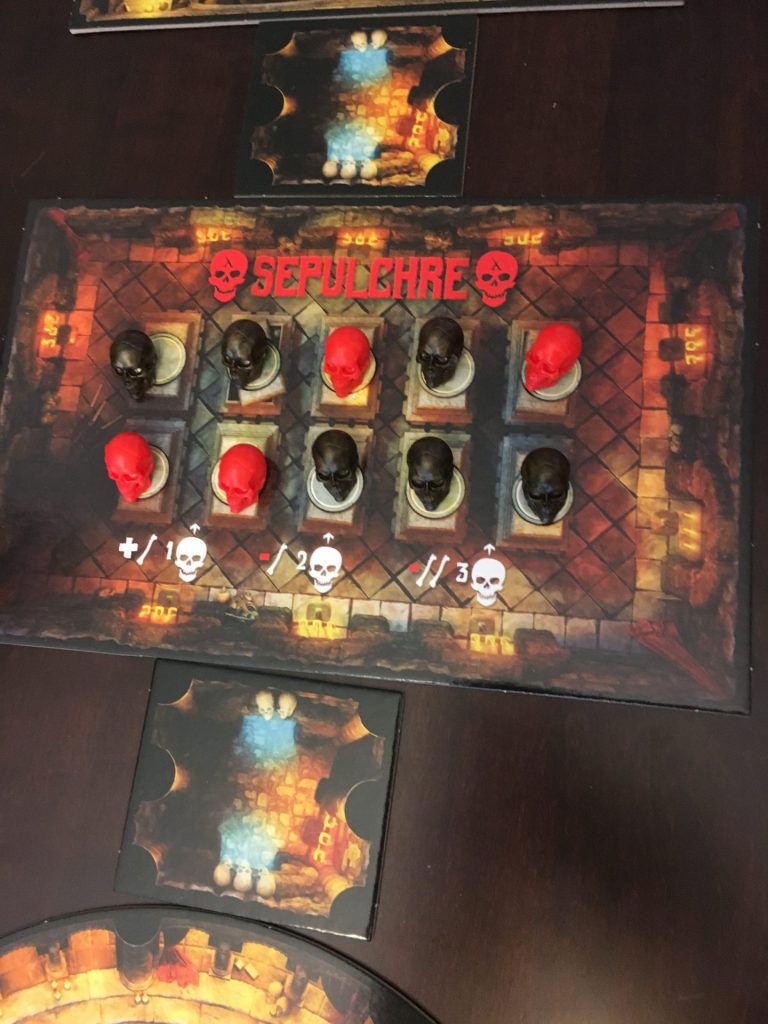 The first action is to collect skulls from the sepulchre. Here you will select a certain number of skulls to add to your inventory.  Skulls allow you to select different actions each turn but are also essential to summoning the undead to join your party. They are a key resource in the game. The number of skulls you select will also determine how much you must pay (or gain) of Dead Man’s Cabal’s second resource, bones.  Bones are a form of currency for many actions in the game, allowing you to do more if you pay bones or less if you wish to collect some bones. 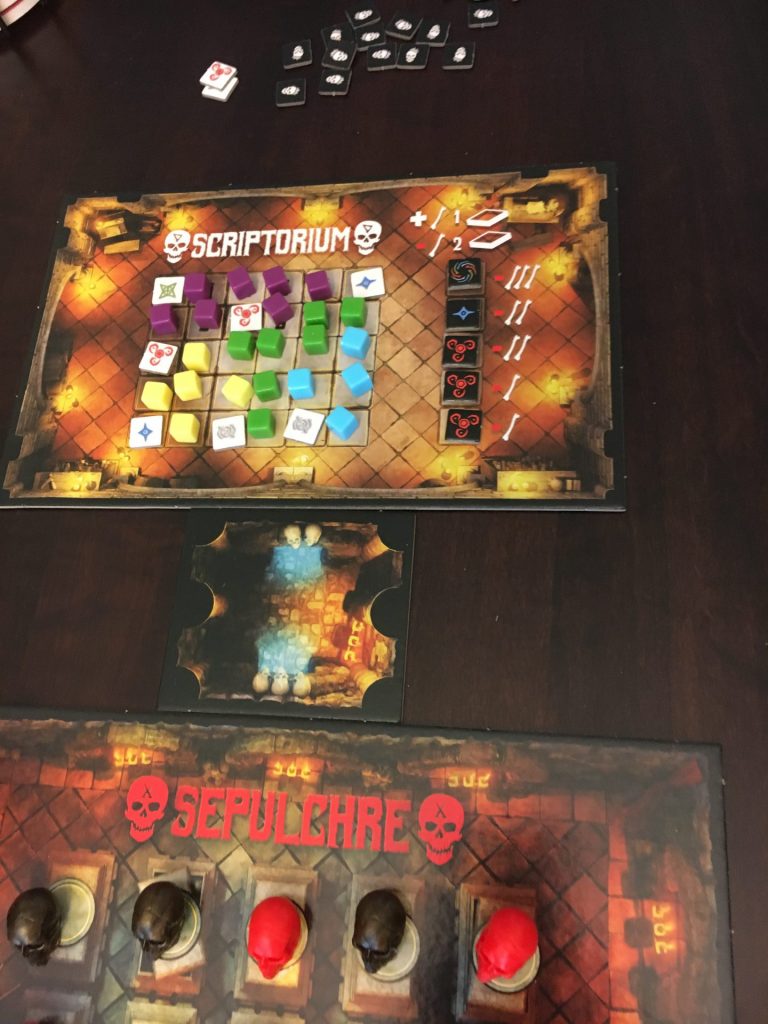 The second action you can take is to collect runes from the scriptorium.  These small, colored items are collected by paying bones to place your influence cubes on the small board or simply collect a black rune of your choice, though those are generally more costly. Along with giving you options to place on guests for end of game scoring potential, you can earn points for the longest row of connected cubes on the white rune section if you qualified for that end game bonus. 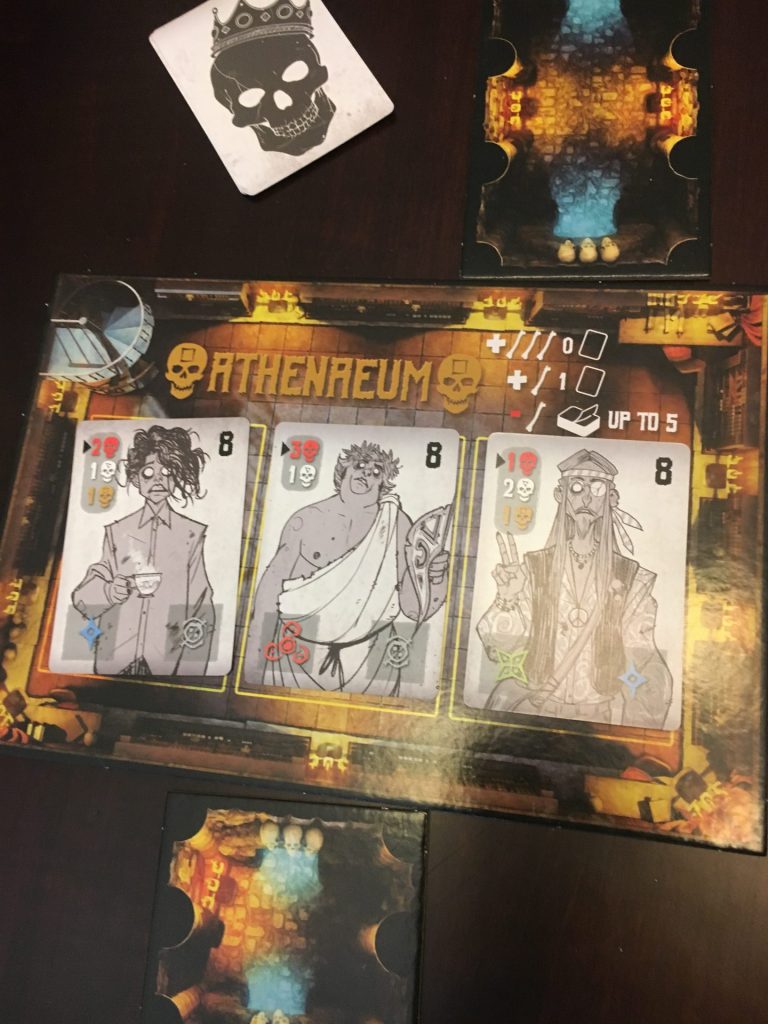 The next action you take is using the athenaeum, which allows you to add more guest cards to your hand.  The number you take is again dependent on the amount of bones you receive or pay. It is important to have a wide range of guests as they vary greatly in the points they are worth and the skulls needed to summon them.  There is nothing more detrimental to your game than taking the summon action and being unable to summon a guest. Guests also may have rune slots on their card that allow you to place any applicable runes on the cards. If you place runes on a guest, you can begin placing marker cubes on end game scoring options, which will net you more points as long as no one has more influence there than you. 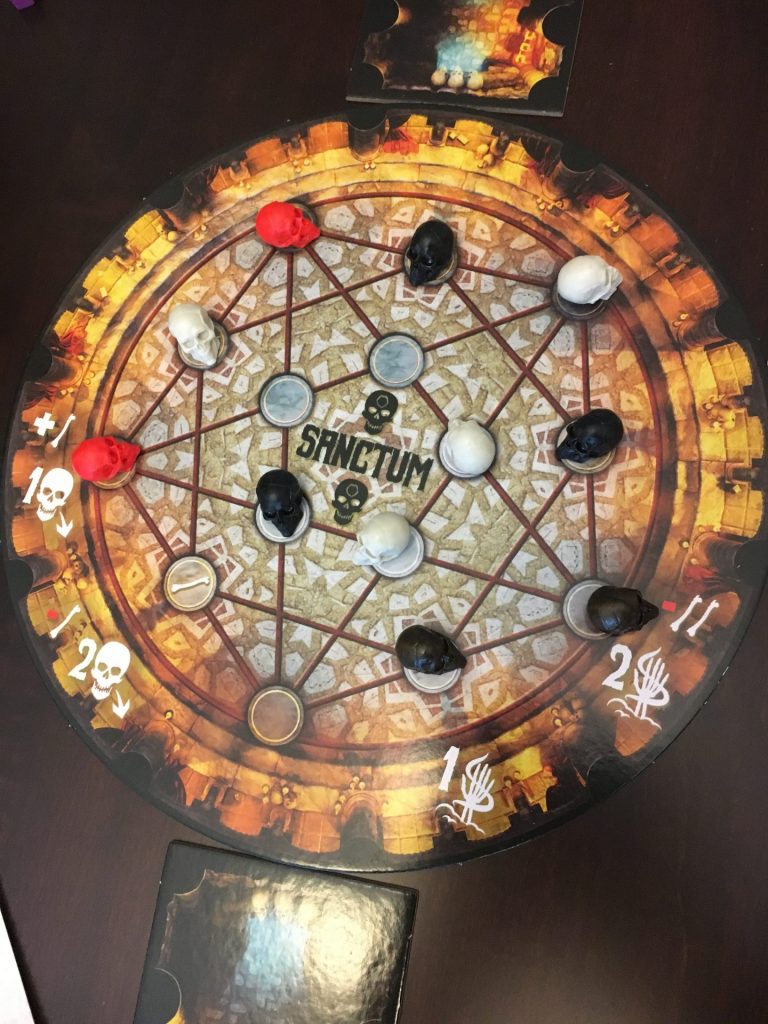 The final action available to you is to summon the undead in the sanctum.  Here you will work to summon your “party guests” by placing skulls on the summoning circle in an order that matches the skulls shown on the guest’s card.  Guests score a number of victory points tallied at the end of the game. The number of skulls you place depends on the bones you either gain or pay when you take this action.  You can play off of other players’ skulls so be mindful of how you place to maximize your turn and perhaps mess up theirs! 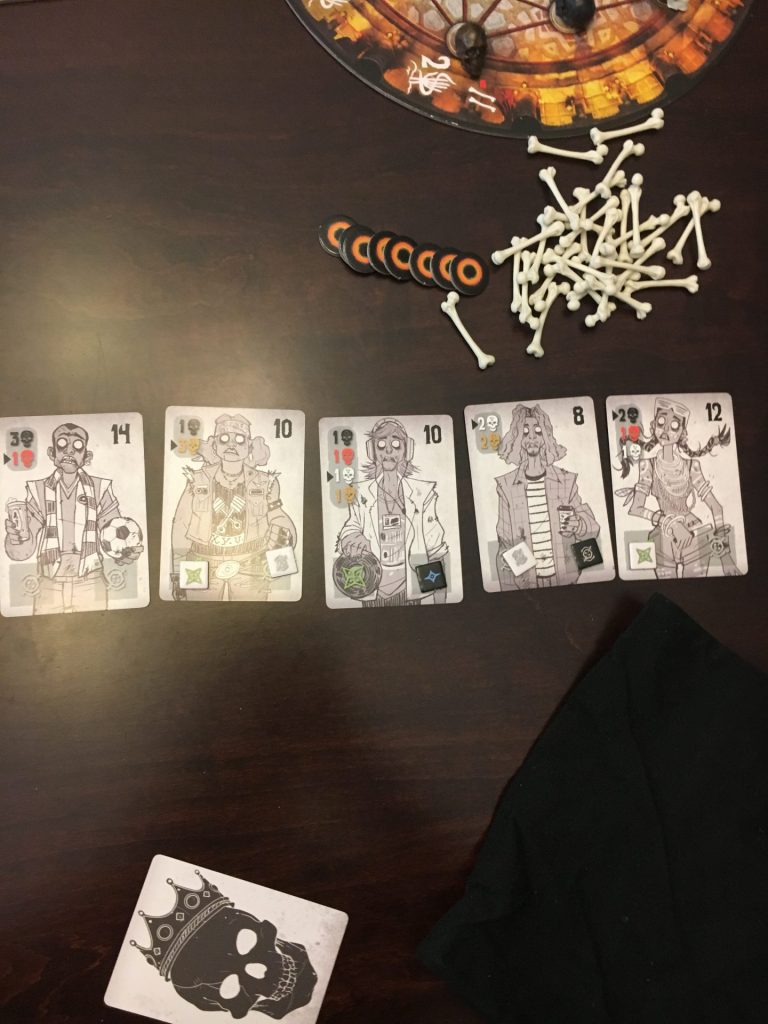 Each action in Dead Man’s Cabal plays an important role in powering you up or equipping you to do more with other actions.  This forces you into a “rubber banding” style of action selection: you might take less powerful versions of a certain action to gain resources to make another action even more powerful. This causes a lot of glorious “brain burn” as you work to plan for your preferred actions while also accounting for the unexpected actions your opponents will throw at you. This, mixed with the mercy of the skull choices in the ossuary, can force you to punt on your strategy from time to time, keeping you on your toes. 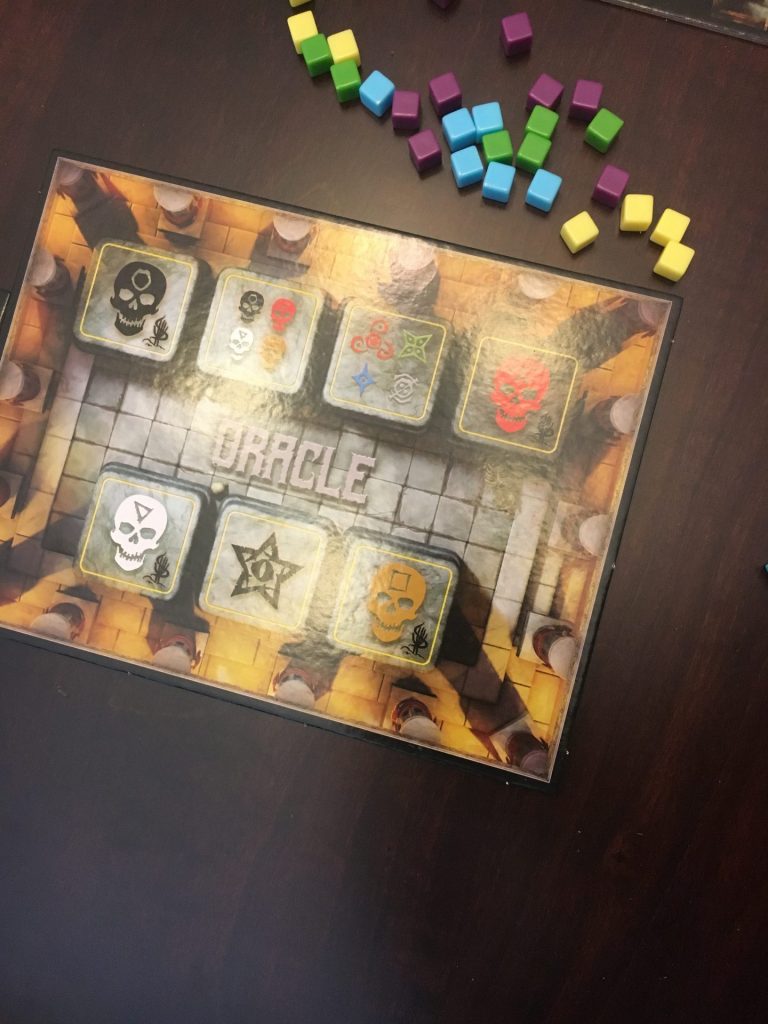 The game ends once a certain number of guests have been summoned or the last influence cube being is placed by a player. At this point, we move to end game bonuses.  Dead Man’s Cabal is great in the way it handles end game bonuses. Players compete for these bonuses during the game by placing influence cubes on each various bonuses.  These bonuses vary from points for skulls you have in your supply, points on certain types of guests based on the skulls used to summon them, the longest line of connected cubes on the white rune board, and even a bonus that is worth 20 additional victory points.  Players compare the number of cubes on each of these bonuses and award the points to the player with the most cubes and a smaller denomination to the player in second. Once this is done, the necromancer with the most points has clearly thrown the best undead bash and wins the game! 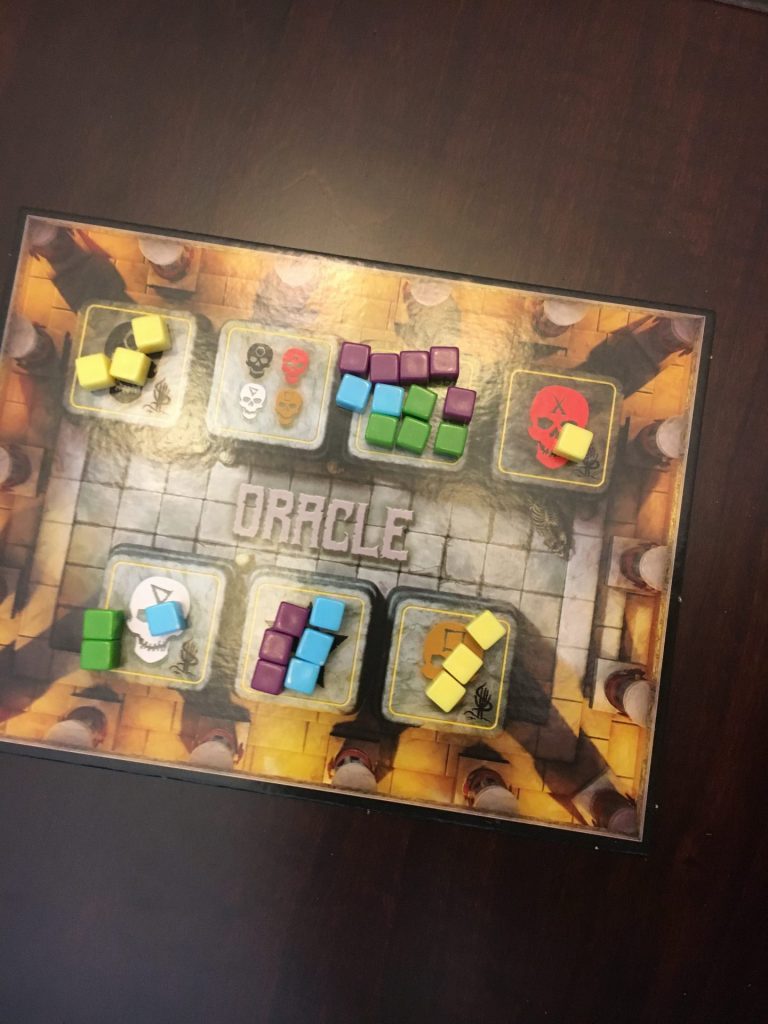 Dead Man’s Cabal is a beautifully-crafted experience that has a rich theme. The component quality and even the extra touch of the hallway tiles to make the board feel like a dungeon really add to the quality table presence Pandasaurus Games has created with this title.  I found the action selection system to be a nice system for keeping gameplay engaging and fast paced.  The “I do something, we all do something” turn flow kept downtime to a minimum, which was great from a functional standpoint, but also added to gameplay depth as I was constantly forced to alter my strategy to what actions I was being “forced” into.  This system creates some really thinky moments as you look to maximise your turn while befuddling your foes.

Since the guest cards have a pretty large swing in points, if you do not carefully raise the most valuable of the dead, you might really struggle to keep up. This coupled with the fact that you can get “forced” into actions that you are not equipped for could be frustrating to some gamers.  While I love this mechanic and how it forces you to think, some may find it frustrating to have your plans derailed by an unexpected action selection.

Dead Man’s Cabal is an unholy alliance of quality components, theme, and design that makes it a great addition to anyone’s collection.  This is a title I would most assuredly resurrect to play again! 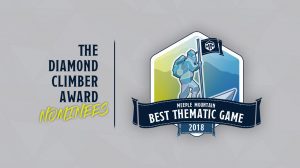 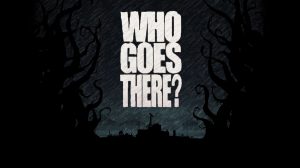 Who Goes There? Game Review

Survival, Betrayal and Canned Food?  Read our Who Goes There review to see why every decision matters - especially who you let be your bunk buddy. 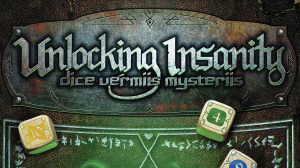 Check out our Unlocking Insanity: Dice Vermiis Mysteriis review to see why going mad is not always a bad thing. 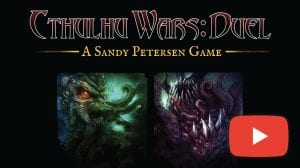 Join Tyler as he reviews the newest title in the critically acclaimed Cthulhu Wars series, Cthulhu Wars: Duel! Come learn how to play and get his impressions...