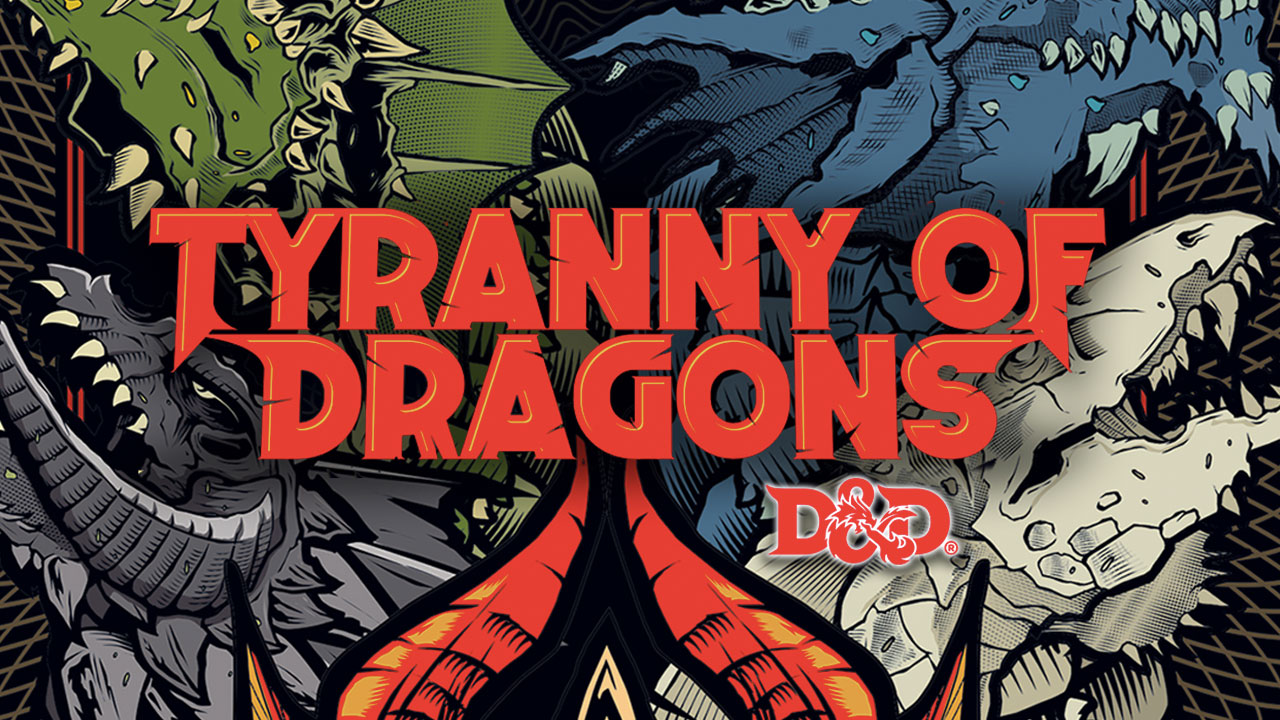 Join us as we revisit the Forgotten Realms and review the fifth anniversary edition of Tyranny of Dragons, the compilation of Hoard of the Dragon Queen and The Rise of Tiamat.

A Long Time Ago…

In 2014, after a very extensive playtest period, Wizards of the Coast (WotC) released the Fifth Edition of Dungeons & Dragons. With lessons learned from the previous edition, this new edition started out slowly with the core rulebooks (Player’s Handbook, Dungeonmaster’s Guide, and Monster Manual) rather than springboard in a large body of supplements. Instead, this edition leaned on digital media for supplemental material and even a freely available Basic Rules set. 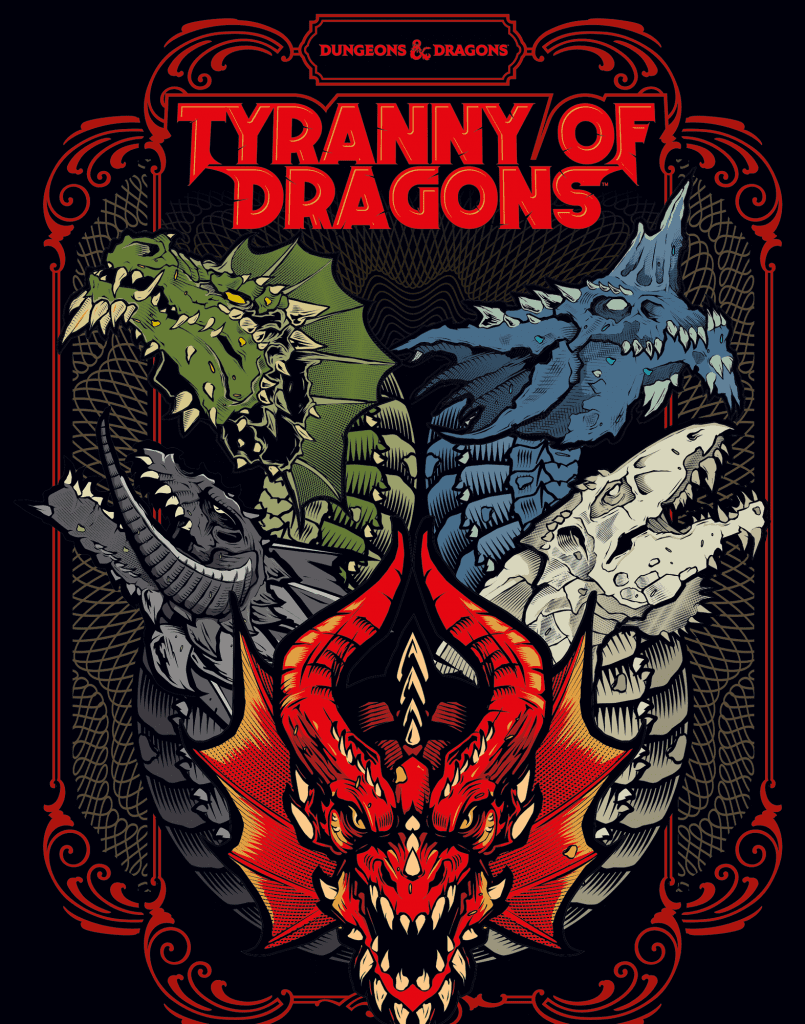 When the time came for the first published adventure material, WotC looked to the veteran adventure module writers at Kobold Press to help write something memorable. The new adventure would follow a different model than those of previous editions. Rather than the 30-50 page modules designed for a small range of character levels, Hoard of the Dragon Queen came out at 97 pages and would allow for characters to advance from 1st to 7th level. This mini-campaign could be completely played with just the Basic Rules found on the Dungeons & Dragons website. To keep the page count under 100 pages and thus keeping the entry cost just under USD, a free digital supplement was made available containing any monster or NPC stats required that were in the full Monster Manual. The cautious audience appreciated this attention to entry cost and found a high-quality adventure focused on the iconic chromatic dragons and their evil god – Tiamat, the Dragon Queen.

Shortly thereafter, a second mini-campaign continued the story. The Rise of Tiamat picked up where the first story left off and would take player characters to level 15 and build to a climactic battle with Tiamat herself. Again, D&D Team followed the same model with a second digital supplement to keep page count and entry cost down.

Both adventures were met with high praise and became the first campaign for many of the fledgling D&D players that flocked to this new, successful edition of the oldest modern roleplaying game.

Since then, WotC has gained their own confidence as well as the confidence of their customers and built on this basic model, doubling the amount of material in a single product. This year’s Baldur’s Gate: Descent into Avernus came out at 256 pages, advanced characters from 1-13 and had a suggested retail price of just under $30 USD while still maintaining the high production values found in those first books. Additionally, each new book features a second limited edition cover that through local gaming stores.

There Was A Terrible Dragon…

Now five years later, Wizards of the Coast revisits these two original adventures by combining them into a single book, Tyranny 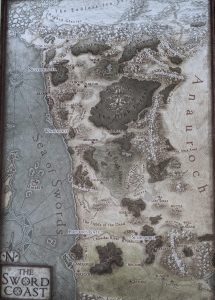 of Dragons, matching the current size and wrapping them in a beautiful limited edition cover that matches those found on later products.

Tyranny of Dragons is set in Faerun, the primary continent in the legendary Forgotten Realms campaign setting (fans of the classic video game Baldur’s Gate will recognize the area known as the Sword Coast). The overarching storyline is that factions of Tiamat’s followers are coming together to bring Tiamat into the world which will unleash draconic devastation across the world of Toril. Where the original adventures each stood on their own, Tyranny of Dragons now provides an overview chapter containing the connective tissue needed to weave plot threads through the entire storyline.

Hoard of the Dragon Queen finds the players on the path of Dragon Cultists who are raiding and looting large amounts of wealth and smuggling it back to a hidden location. As the adventurers follow lead after lead, they discover that the cultists are building a treasure hoard worthy of a Dragon Queen. The climax of the story comes as they confront the cultists and stop their attempts to free Tiamat from her imprisonment in the Nine Hells and bring her to Toril.

The Rise of Tiamat picks up the story with the Cult of the Dragon regrouping and making one final press to complete their goals. This time however, their forces have grown strong and it will take a coalition of some of Faerun’s most powerful factions to assist the adventurers in their goal. The actions that the players take will determine which factions assist along the way and in the final assault on the Temple of Tiamat. Though these factions have agreed to a temporary alliance, they do still have their differences. If the adventurers advance the interests of one faction, they may find other factions less helpful.

Though these two adventures connect, they each have a distinct feel. Hoard of the Dragon Queen feels like a constant chase as they connect the dots across Faerun. The Rise of Tiamat has more of a political feel to it with each subsequent alliance council meeting providing new leads and new faction objectives. 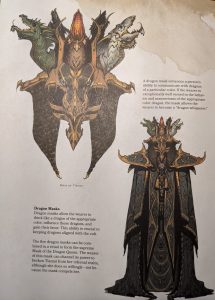 The variety of enemies and NPCs is impressive. There are plenty of dragons and cultists, but there are also many other iconic monsters, making this a great introduction to Dungeons & Dragons. This collection includes the original digital supplements in print form as a welcome convenience. That means you only need this one book and the Basic Rules to play the full storyline. It might be useful to still grab the digital supplement for The Rise of Tiamat for a printable version of the Council Scorecard that can be used for keeping track of the Factions as the adventurers complete objectives.

On top of the story and stat blocks there are several great magic items and artifacts that can be acquired through the storyline or used in your own homebrew campaign. The Dragon Masks especially are a great addition to the D&D iconic artifact library. Each one provides the ability of the chromatic dragon it represents. Additionally, they combine together Voltron-style to create the Mask of Tiamat, a very powerful artifact that represents the five-headed dragon goddess.

With a Magnificent Treasure.

The production quality of this book is especially high-quality. Not only does it have a fantastic foil cover by Hydro74 as seen on many of the limited edition books, but the interior is a work of art as well. The pages are of a heavier weight with an almost parchment tooth. This makes the already gorgeous maps by Jared Blando feel like diagrams in an ancient grimoire. Finally, this limited edition has a great concept art gallery. Again, the page quality makes these illustrations pop. I especially loved the inclusion of the classic chromatic dragon sketches from the 3rd Edition Draconomicon. These are some of my favorite D&D interior illustrations and the parchment texture of the pages make them feel like I’m looking at pages from the actual Draconomicon. 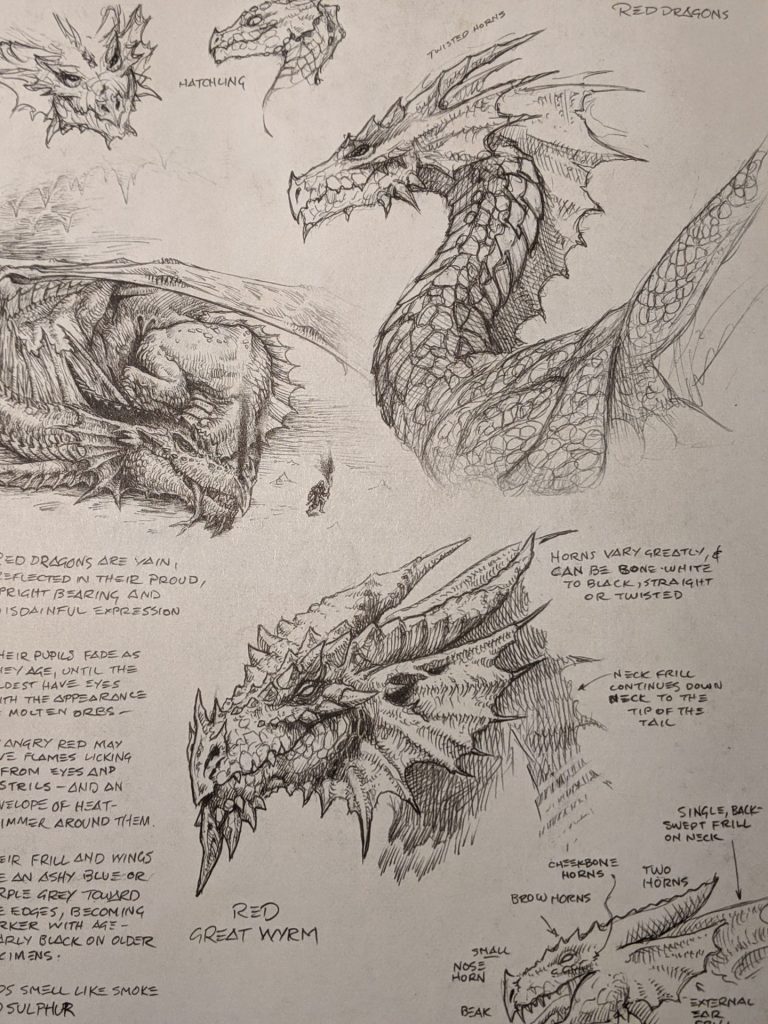 Overall, this is a great addition to any DM’s library. Not only does it look good on your shelf but it is a great adventure for your group whether they are new to D&D or are seasoned veterans. There’s something here for everyone. If you already own these adventures in their separate original forms, there’s not much in the way of new material. The first overview chapter does help tie things together and gives you some context for all of the various factions and where they come into play, but that might not be enough to entice a repeat buyer. More likely, a repeat buyer will purchase this to add a beautiful book to their collection.

Tyranny of Dragons can only be found at your local game store! More information about it can be found at: https://dnd.wizards.com/products/tabletop-games/rpg-products/tyranny-dragons