Excavating ancient ruins and making important historic discoveries has been a romantic notion going back to at least Allan Quatermain and the 1885 novel King Solomon’s Mines. In Curios, from Alderac Entertainment Group, players will use logic, deduction, and a bit of good old guesswork to unearth important and valuable artifacts in four different dig sites. Will you stake your reputation on a hunch or will you do the legwork to send your team to the most important locations? Only time, and the end of the game, will tell you if you were right. 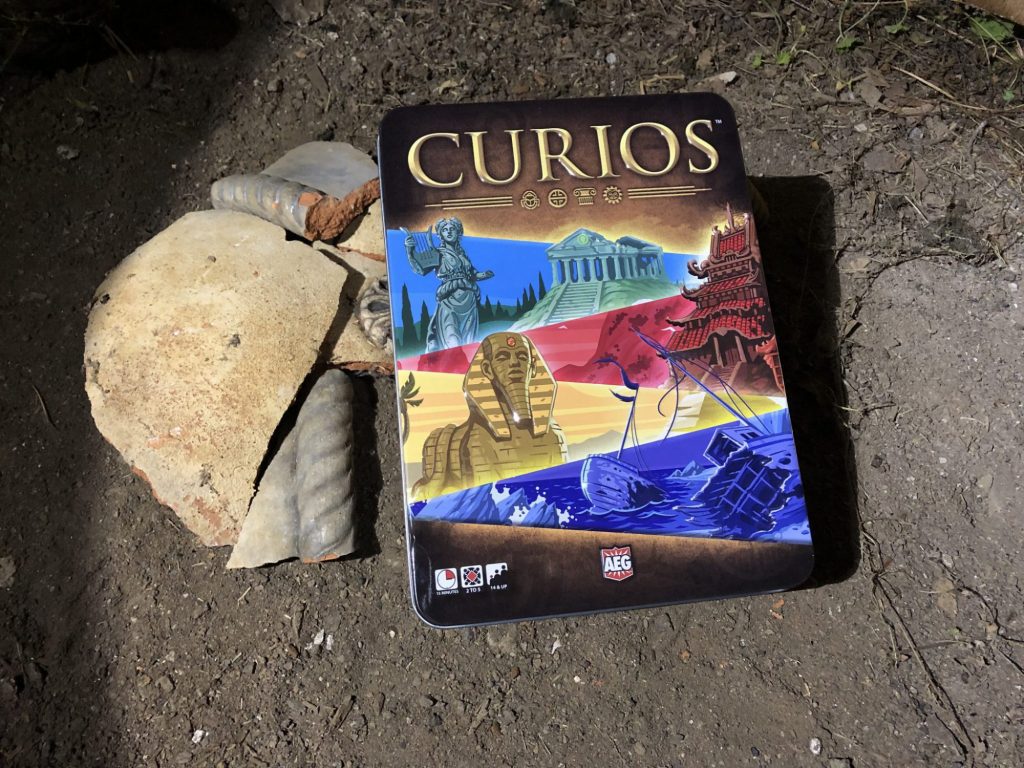 In Curios, 2-5 players act as archaeologists on the search for important artifacts at historic locations. Over the course of the game, each player will send their workers to 4 different dig sites to recover valuable artifacts. But players only have a limited pool of pawns so you must use the hidden information you have to deduce the best locations. 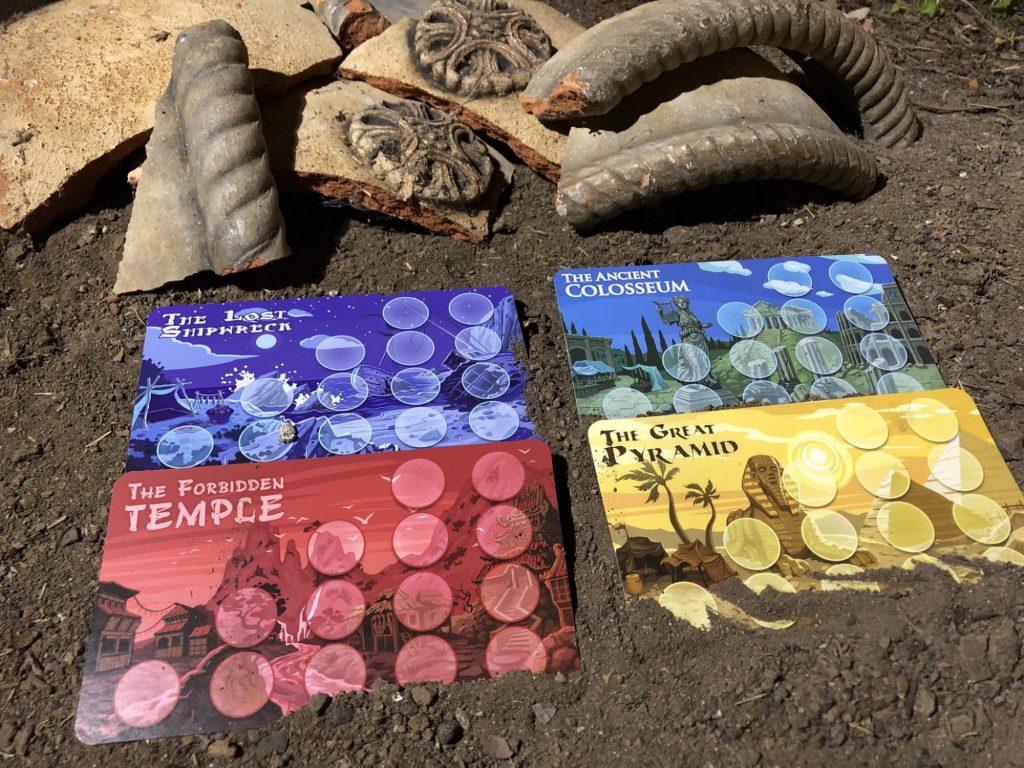 The setup for Curios is simple. Place all 4 location cards on the table, then separate the market cards for each location (so that each location has a 1, 3, 5, and 7 value card). Shuffle each pile and place a random card from that stack face down next to the location. This means that every artifact from each location will be worth an unknown but fixed value at the end of the game. Then shuffle the remaining market cards and deal a set amount to each player (based on a chart in the rulebook). These cards provide each player a small piece of the puzzle, giving you some of the information you need to choose the best sites. 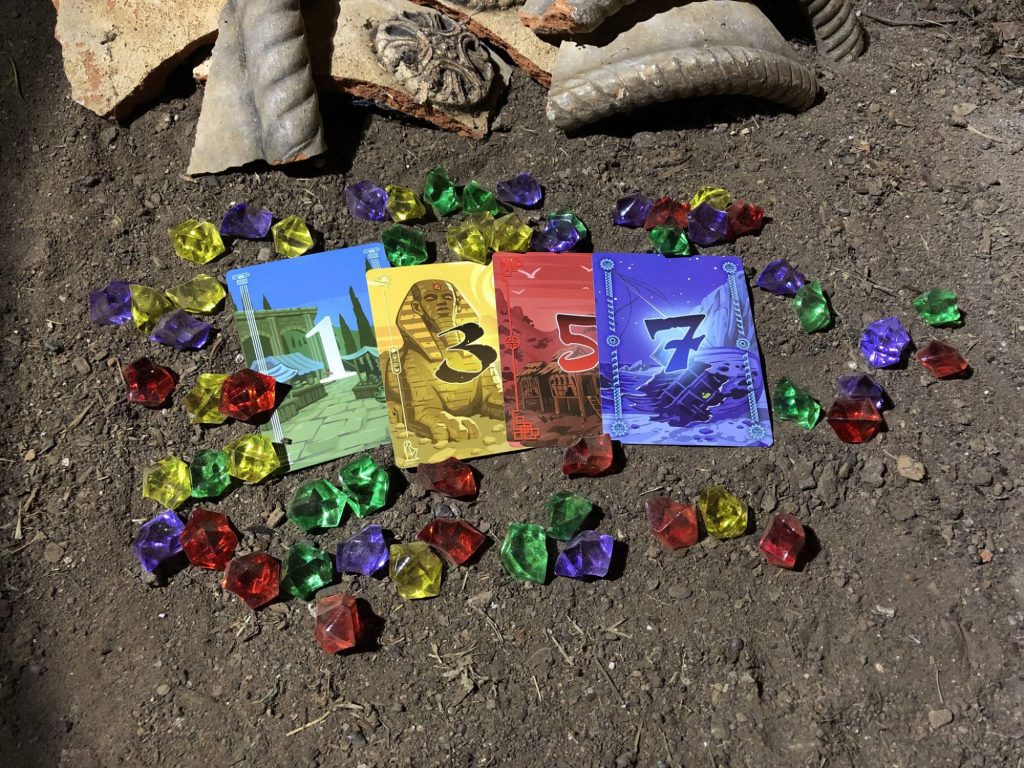 Sending Out Your Workers

On your turn you’ll choose one location, send a number of workers there, and collect one artifact. The number of workers is dictated by how many workers are already digging there. Each player must send enough workers to fill the leftmost empty column. That means if you’re the first one there, then you’re able to send just one worker to begin excavation, but if you’re the third player there you’ll need three. The decision where to send your pawns is compounded by the fact that each player only starts the game with 5. 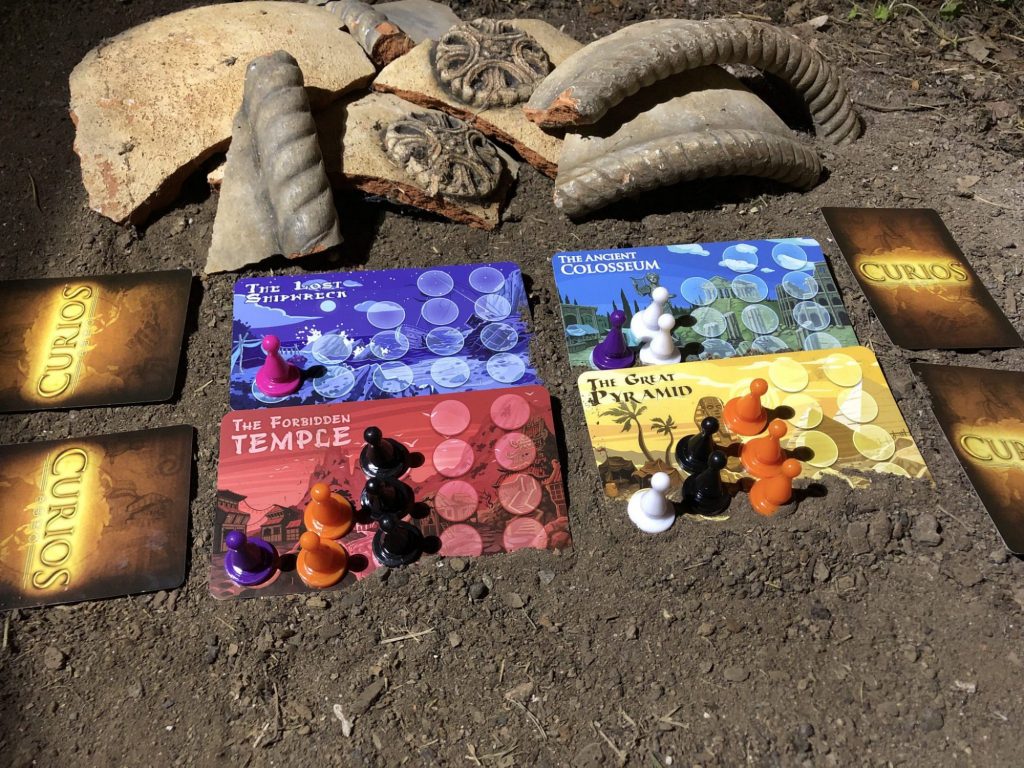 After all players have placed their workers, or passed, the person with the most workers at each location will collect an additional artifact.

Luckily players are able to recruit up to 2 additional workers as the game progresses; but it’s at the cost of revealing precious information. In turn order players may choose one of their market cards and place it face up in front of them, and take an additional worker. The upside is that now you can do more, while the downside is that you’ve given your opponents an extra bit of detail that might lead them to the most valuable locations. After each player has had the chance to recruit new workers, the next round begins.

After three round the market cards for each location are revealed and players will tally up their points. Each colored gem receives a value equal to the value of the matching location. The player with the most points wins the game. 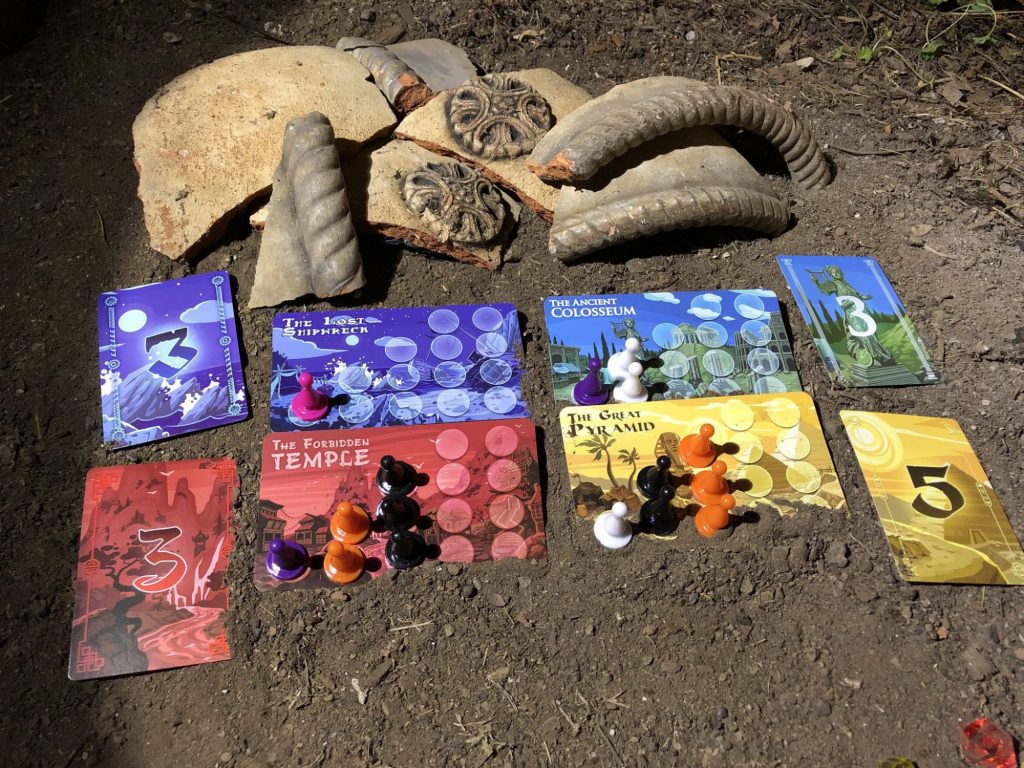 History is full of exciting archaeological revelations: Arthur Evans discovered the palace complex at Knossos, Hiram Bingham stumbled across Machu Picchu in 1911, and Howard Carter unearthed the tomb of King Tutankhamun in 1922; the list goes on and on. These people were the basis for Indiana Jones, Lara Croft (from Tomb Raider), Sharon Golban (from The Body), and Kate Ericson (from Timeline). Excavations of historic sites not only tell us about ancient civilizations, but also reveal a little bit about ourselves. How have we changed since this culture walked the earth, how are we the same?

Curios is lightweight, with plays taking 15 minutes or so, even at 5 players. It occupies the same mental space as games like Clue, or Scotland Yard, where players must use hidden and public information to make decisions about the game state. It’s going to be introduced at Gen Con 2019 as part of the same Big Game Night swag bag as Point Salad. While the gameplay is light and fun, some might consider the subject matter to be a little heavier; arguments over cultural appropriation and repatriation, etc. But I’m personally going to choose to come down on the lighter side. Curios is a clever little game, and is great fun for groups of people; especially ones who love deduction.

I’ve played Curios with 2 players, all the way to 5, and while the gameplay itself is the same, the experiences are quite different. Because the number of locations remains fixed, as do the available worker spots on each location card, games with 5 players are going to be much tighter. I wonder if AEG passed up an opportunity to make the location cards double sided based on player count.

The most striking thing about Curios is going to be the gems, they’re wonderful! They’re shiny, clear, and large; each almost the size of a nickel…and so satisfying to pick up and hold. 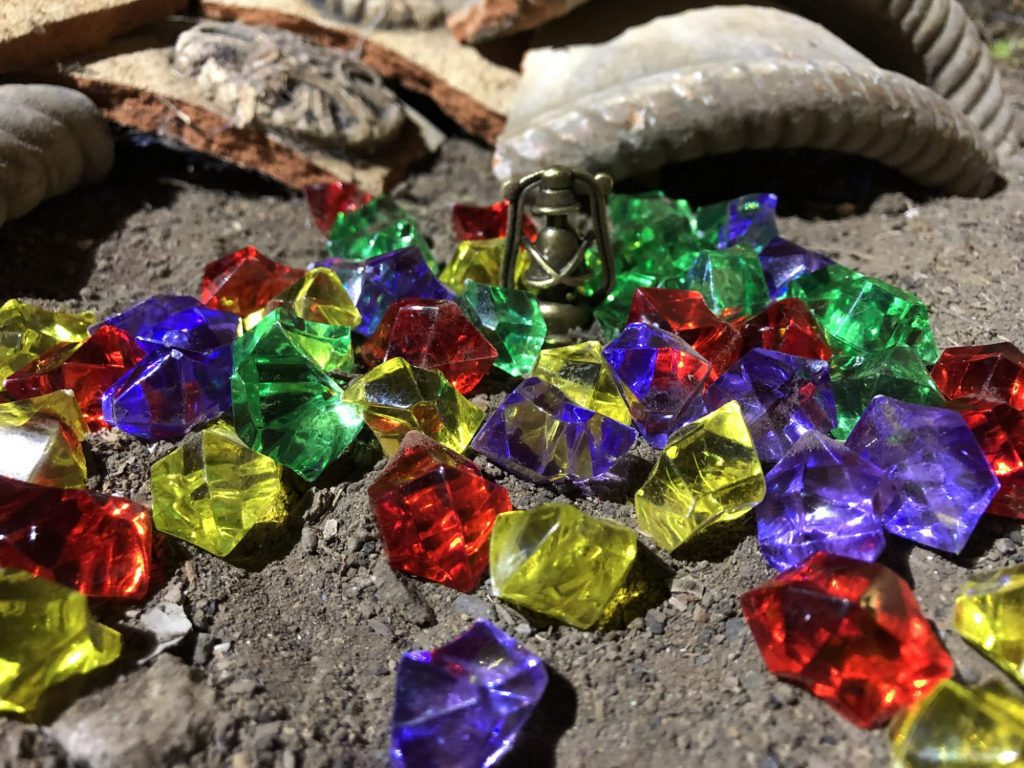 The only thing I don’t like about the game is that it comes in a tin. I’m not sure where the marketing headspace was for that, but it’s an odd choice, especially when the other 2 games in the BIg Game Night swag bag are both in standard boxes.

All things equal Curios is an excellent game to break out for groups up to 5. It’ll slot right into the beginning or end of a game night, or be the perfect filler between other longer games. It’s clever and fun, and doesn’t overstay its welcome…plus those gems. You’ll feel like a master sleuth when you make good deductions, and a king when you rake in the gems.