Council of Verona Review – Are the Hours Long or Short?

Romeo + Juliet (the Baz Luhrmann edition) is one of my favorite all time movies. Combined with my amateur love of theater, themes involving Romeo and Juliet always intrigue me. So, seeing a game named Council of Verona is an instant eyebrow raise for me. Turns out I’ve been exiled in Mantua for too long, as the copy I received is the 3rd edition currently (October 2019) on Kickstarter.

I asked myself, “how does the story of Romeo & Juliet transform into a game?” Designer Michael Eskue answered that question by creating a mixture of card drafting, motive deduction, and gambling from the perspective of the frustrated citizens of Verona. I delve into the details of how he accomplished that in the Gameplay section. If you’re already familiar with the game, you can skip past to the section titled From 1st to 3rd Edition which precedes my final Thoughts.

In Council of Verona, players represent influential citizens of Verona who are ready to see an end to the conflict between the Montagues and the Capulets. The Prince has formed a council to mediate the conflict. Players use their influence to manipulate who gets to be on the council and who gets exiled from Verona. The story of power here is a tad convoluted. The available people to be on the council are not the player citizens, but the characters from Romeo and Juliet. The Prince himself is such a character and his Agenda is wise – a balanced or neutral council – but the citizens have the power and often the desire to completely imbalance the council.

Mechanically, the player citizens place character cards into the Council or Exile sections and move them around with character abilities. They place Influence tokens which are either value bets, poisons, antidotes, or straight bluffs on some of these cards. At the end of the game, all is revealed to show who has been most successful in predicting the wily machinations of the citizens.

Players choose a color and take Influence tokens appropriate for the number of players – 2 players take all the tokens, 3-5 players take all but the “4” value. There are 5 tokens for each color: 5, 4, 3, 0, P [oison], and A [ntidote]. 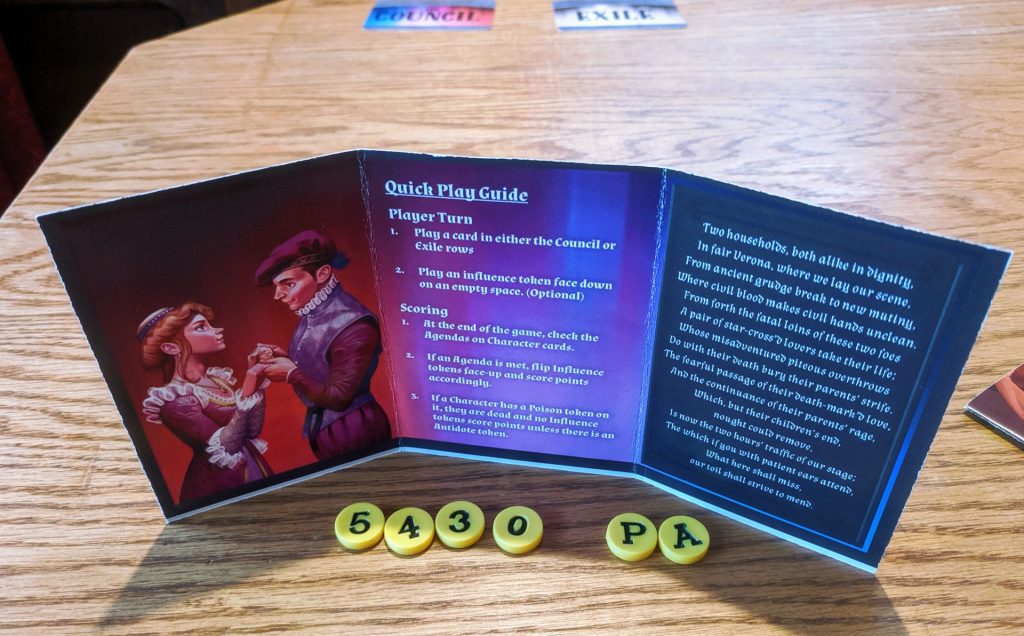 Hiding your tokens behind Shakespeare’s poetry.

Then each player can take a player screen to help keep their Influence tokens concealed. The prototype player aid is semi useful; it has a quick play guide, a portrait, and the opening quote of Romeo and Juliet. Hopefully they will get some feedback and replace some of it with a list of all the possible characters and abilities to aid new players who have not memorized them all.

The characters are represented by 17 cards which contain either Agenda and Influence token spots or a special ability. Only 13 are used for a 2-4 person game with the remaining four marked with a 5 to indicate their usage in 5-player games.

There are also two cards marked Council and Exile that you place on the table for play. 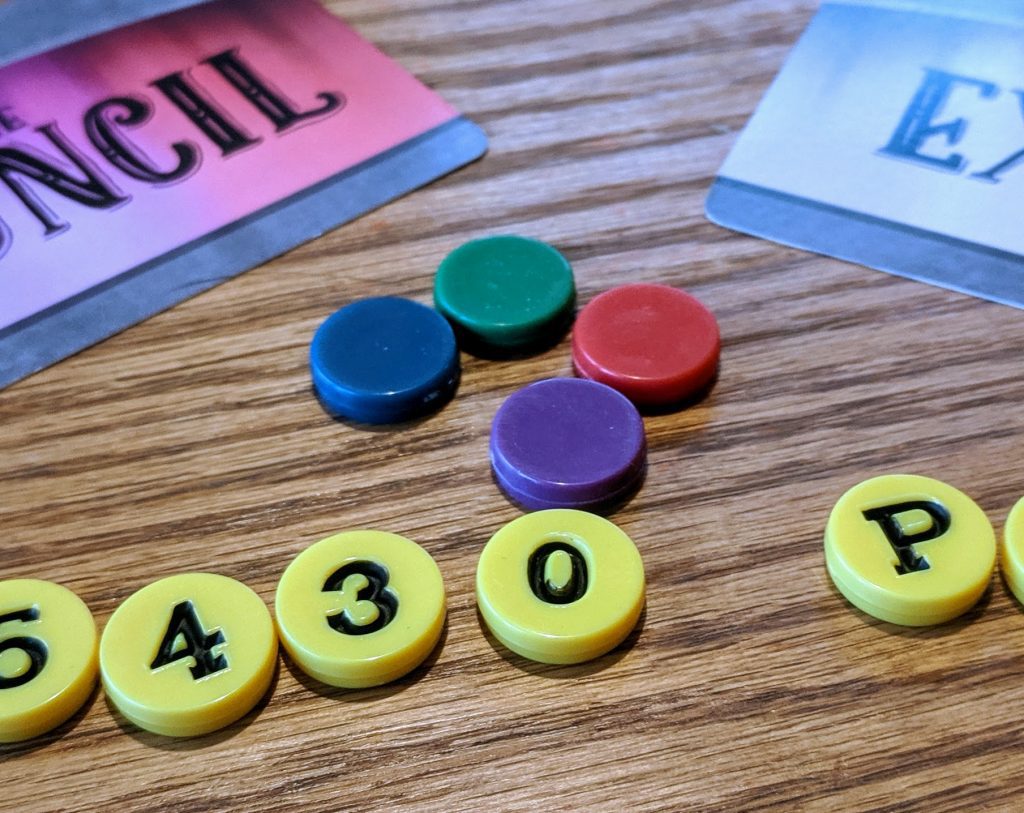 In a two player game, the dealer shuffles and deals the first three cards back into the box unseen. She then randomly splits the remaining ten between her opponent and herself. Each player chooses to keep three and slides the remaining two face down to their opponent to give each player their 5 card starting hand. This gives each player some working information on the other player’s hand but imperfect information due to the 3 cards in the box.

In a three to five player game, each player is only dealt ONE starting card; then, beginning with the first player and proceeding clockwise, each player takes the deck, selects one card and passes the remainder until the last player chooses from the last two, putting the very last card into the box without showing it to the other players. Players in three player games will end up with 4 cards each while players in 4-5 player games will end up with only 3 cards each.

This phase can take a bit as players will want to strategize about which cards to select to shape their overall strategy in the next phase. 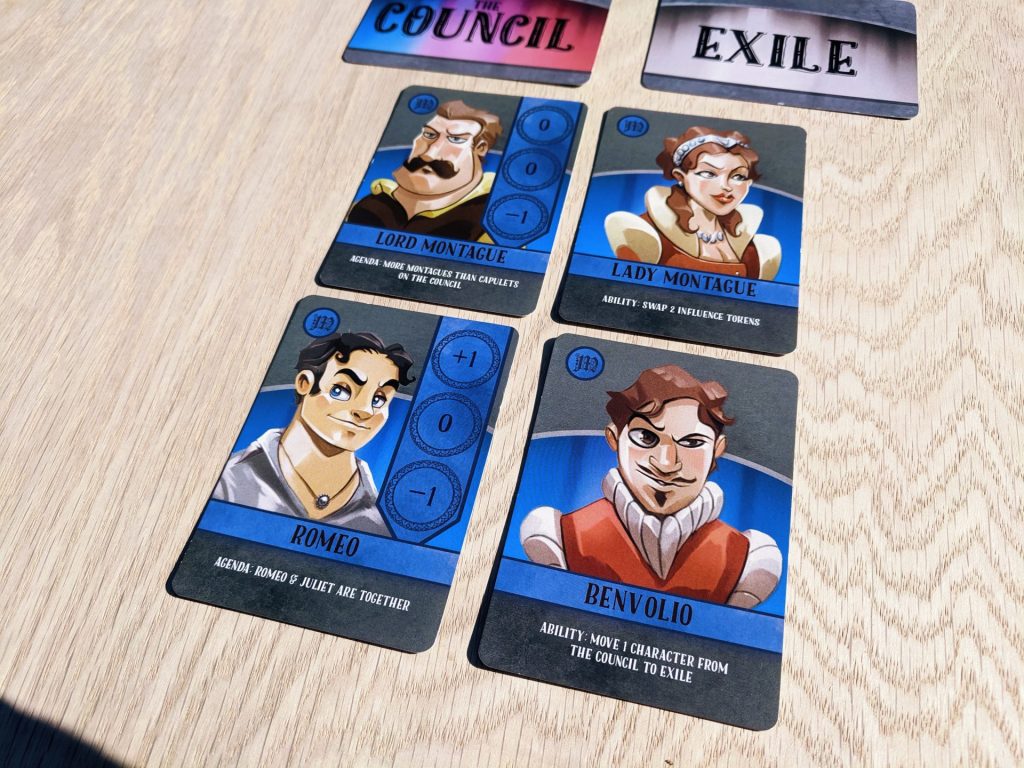 Be ye of the house of Montague?

Once players have their cards, card playing begins with the first player. Each turn, the current player chooses a card and places it face up in the Council section or the Exile section of the table. There is no limit on the number of cards in each section.

If the card has an ability, the player may choose to use it at this time only. Abilities include actions such as swapping/revealing Influence tokens or moving characters between Council and Exile.

Play proceeds clockwise until each player has played all of their cards and then there is one more round of play where players may place one more Influence token if there are any available desired locations.

This is the part of the game where players will try to execute their strategy and adjust for the strategies they believe their opponents are taking. Did Bob bluff when he placed a token on Romeo, whose Agenda is to be wherever Juliet is? Why did Jane place a token on Juliet after placing Juliet in Exile? Guessing people’s motives while hiding your own is quite the challenge with so few components and rules. 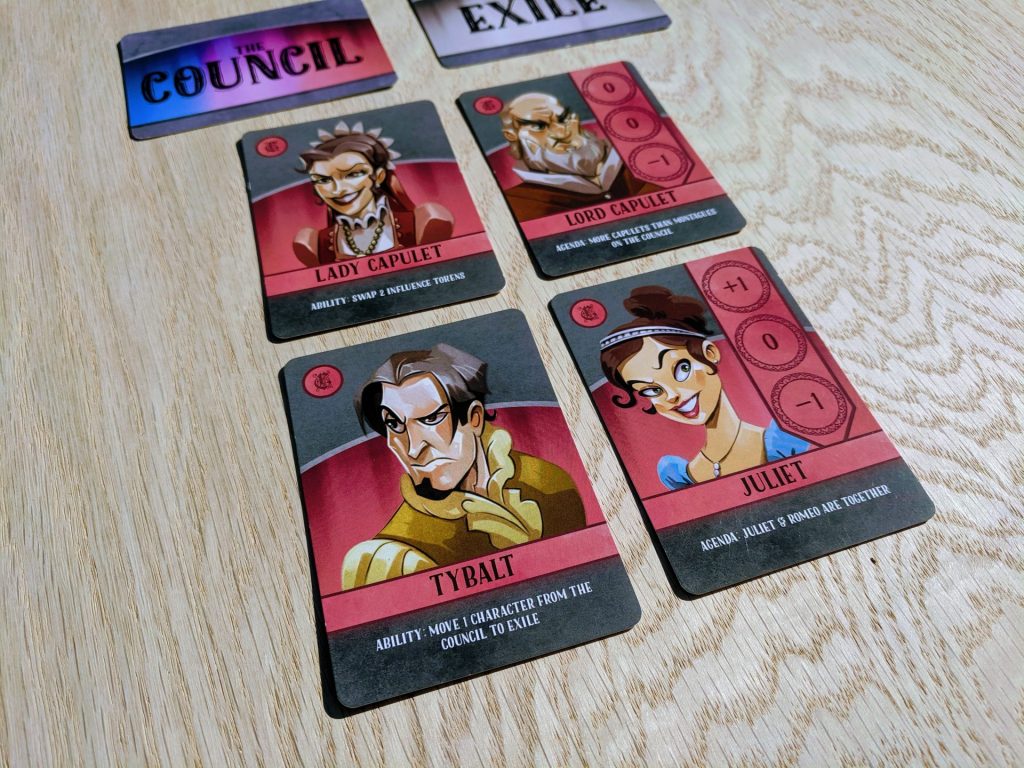 Perhaps you wish to dance with the Prince of Cats?

At this point, players turn all the tokens face up. Any character who has more poison tokens than antidote tokens is dead and the tokens and card are placed back in the box.

The remaining character cards are evaluated in place. If a character’s Agenda condition is met, all numbered tokens on that card are scored for its respective player at face value plus any modifiers. Modifiers on most cards range from +1 to 0, but there are a few that range from 0 to -2. Don’t be the player who played a bluffing zero token on the -2 modifier!

Tokens on character cards with unmet Agendas are not scored. Poison and Antidote tokens are also not scored regardless of location. 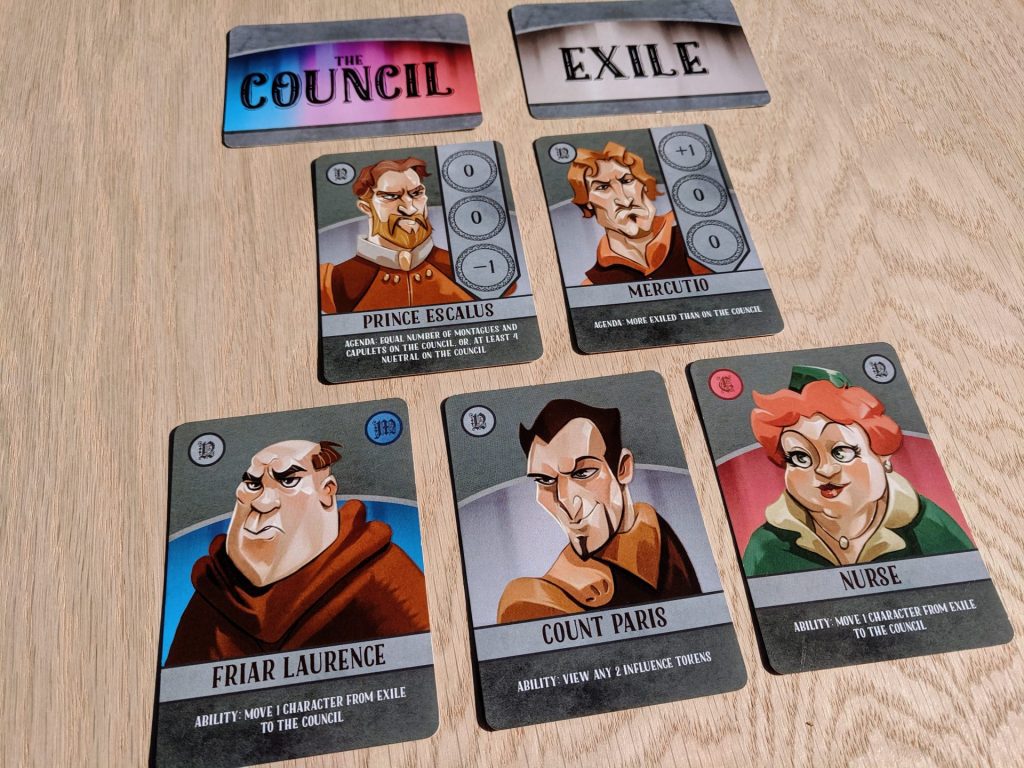 Here are the neutral characters, though the Nurse and the Friar have dual loyalities.

From 1st to 3rd Edition

This 3rd edition of Council of Verona has some good changes from the first and second editions, as well as some less desirable ones.

First, a good change is that instead of being a separate expansion as in the 1st and 2nd editions, the Poison and Antidote tokens come with this edition. Unfortunately, the publisher is not promising to include a previous expansion called Corruption.

Another change is that a couple of the 5th player character cards, Sampson and Balthasar, have had their abilities changed from cloning other abilities to permanently revealing a token. 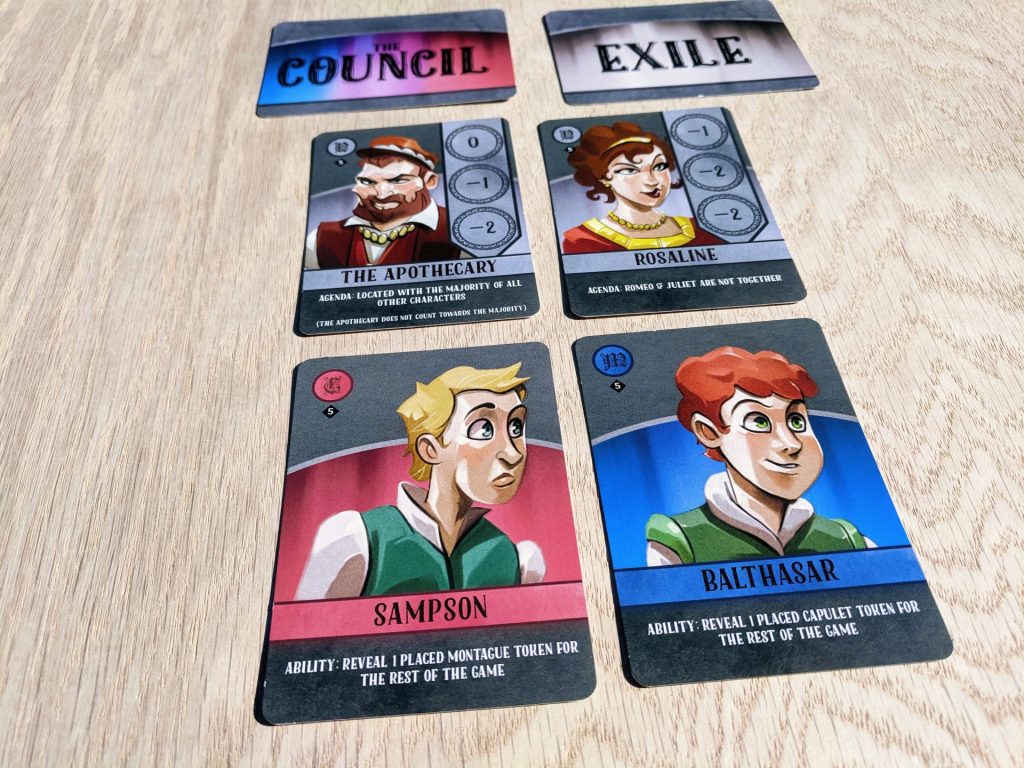 Characters to add for 5 players. Sampson and Balthasar include some of the few changes for the third edition.

The second edition had player aids similar to the ones in Love Letter, card-sized lists of all the possible characters. These were useful for new players and mid-game tracking. These player aids were not included in the prototype provided and do not appear on the current Kickstarter campaign.

The biggest change is the artwork. All of the game’s artwork, including the box and the cards, has either been reworked or redone completely. Some of the characters just had minor work done on them, adding more color and reducing details while adding others. Some, like Romeo, were drawn completely differently. Overall, this edition is far more colorful and easier to read at a glance than prior editions. I personally prefer the vivid blues and reds along with the merged purple atmosphere on the box.

I really love this game as it has so many elements that I enjoy. Unfortunately, I think it has a few things keeping it from being a great game that I can bring to the table. I feel like Romeo rushing back from Mantua only to discover the body of Juliet cold to the touch.

Council of Verona is brief and strategic. The 20 minute time estimate on the box is not wrong for experienced players and not far off for complete newbies. About half that time is spent choosing your cards in the higher player counts, and that can feel a bit off for players expecting more action. I enjoy the aspect of bluffing, timing my character abilities, and betting on the right outcome, but not everyone does. Likewise, for some, the game may feel too short for the amount of mental energy spent. Every group I played with allowed me to convince them to play it a second time – but were ready to move on after that one.

Despite all the strategy involved, players ended up in scoring ties frequently, and the tie-breaking mechanism is not thrilling, though probably well balanced.

People did seem to be amused with the surprise of poisoned characters or the character with multiple antidotes.

Knowing that no one is going to be asking for it at my game nights makes it difficult to put this box in my bag, which brings me to my most critical and yet frivolous complaint: the box size. 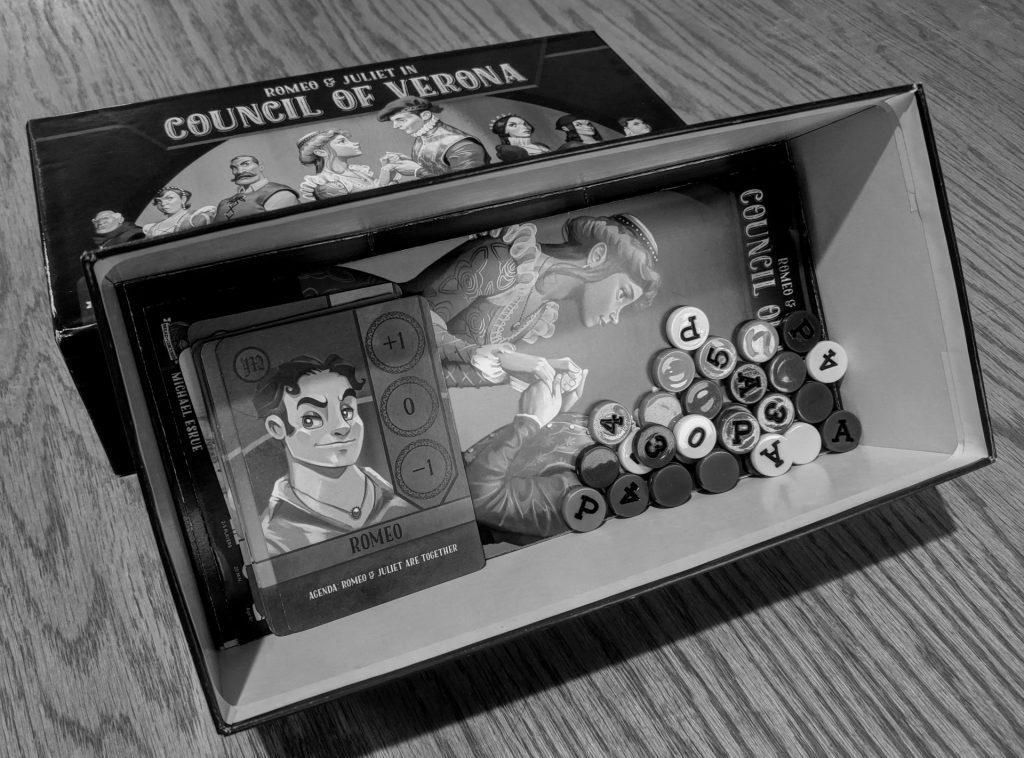 Lots of dead space in this one.

The box is too big for the components. Reducing the player screen in size so that it can be folded up to card size would get rid of most of the dead space and allow this game to fit in a back pocket. One could get more plays of this game if it could be brought to smaller non-game oriented events or squeezed into bulging game bags without sacrificing space for greedier games.

However, I think that Tybalt and I could endure the insult of such an ill sized box if the game were properly expanded to be less of a light party game limited to 5 players. As it stands, Council of Verona it feels like it fits between the light party genre and the mid-weight sized strategy genre. I’m less interested in the light party end of the spectrum; I would really like to see the game expanded to play longer with more strategy opportunity so that it justifies its box size and satisfies me with just one play per night.

If your group believes that the Council of Verona successfully mediates these two great families into one great game after reading this review, check out the Kickstarter. If you find yourself thinking that this is a misadventured piteous tragedy, move on before you find yourself among the body count.

If Council of Verona sounds interesting and you don’t want to wait for the Kickstarter, you can pick it up on Amazon right now.