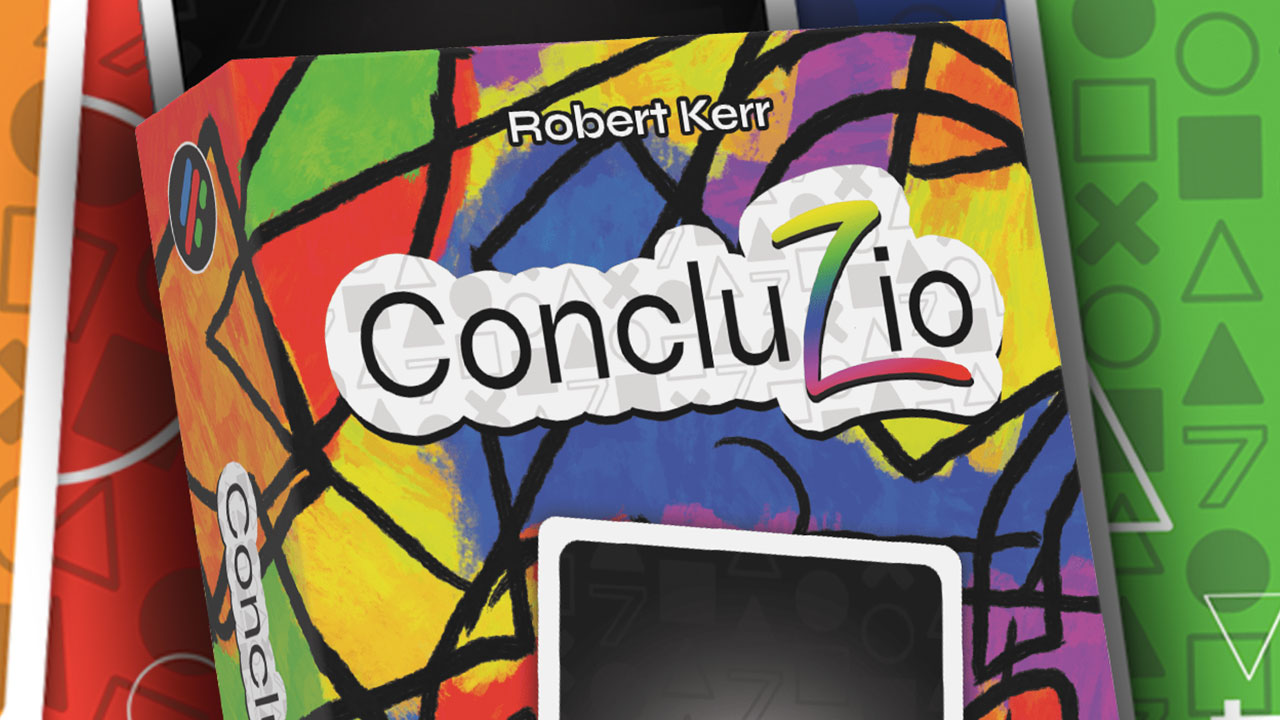 One of the main reasons I play games is that I like feeling clever when I solve a problem. There’s something immensely satisfying about turning your brain loose on a problem and letting it sort through each piece of available information until you find the perfect solution. Deduction games are the most elegant expression of this quest, making them a popular target for logic-loving gamers and a mainstay in my collection. 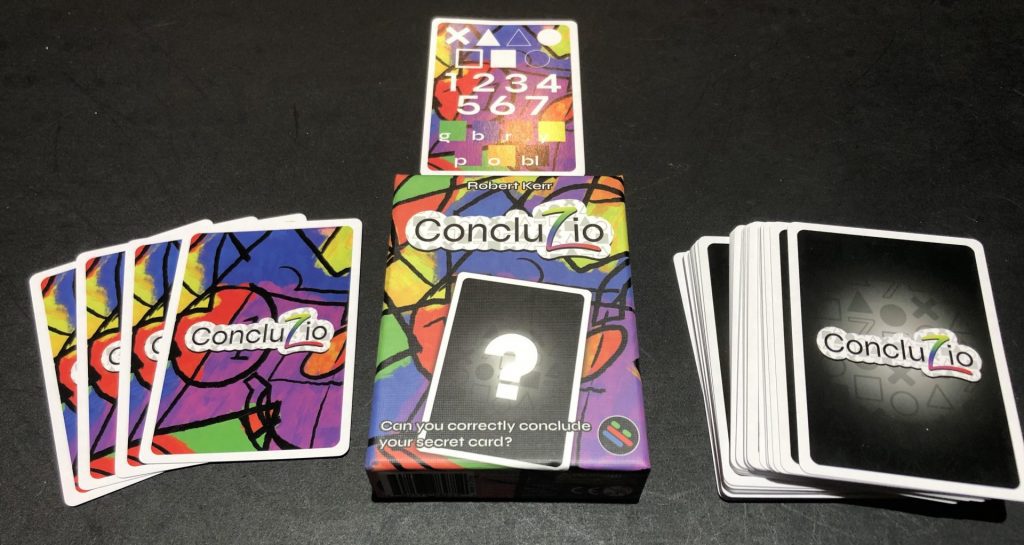 Pick a Card, Any Card

Concluzio from Puzzling Pixel Games is a lightweight deduction title for 2-4 players. It promises a quick race to identify your secret card before one of the other players can guess theirs.

To be honest, Concluzio doesn’t look like much at first glance. At a slim 54 cards it’s no more elaborate than a traditional playing card deck, though it does come in a proper lidded box instead of a tuckbox. Of those 54 cards, 1 is just a reference card and 4 are optional player powers; the remaining 49 are the Hint cards — each a unique combination of color, number, and shape — which are used in play.

The art and graphic design are functional if minimal. A lineup of solid colors and bold numbers make it feel like another challenger to the UNO throne — but looks can be misleading. The test of a deduction game is how well it strains your brain and a game of Concluzio is going to do just that.

To start, each player receives 5 Hint cards, which they can look at, and a secret card, which they cannot. This lone mystery is held face-out in the style of Hanabi, taunting the player with its inscrutable back. On each player’s turn, they’ll choose a single card from their hand (except of course the secret one) and show it to their opponents, who will tell them whether the card in question shares an attribute with their secret card — a Yes — or whether the two share no attributes at all — a No.

The acting player puts that card in front of them in whatever orientation and space they like to help them remember this information, then play passes to the next person. When a player feels confident, they may choose to guess their hidden card instead of taking their normal turn. Guess right and they’ll win; guess wrong and they’re eliminated.

Secrets, Secrets Are So Fun

That’s really all there is to it. Here again Concluzio doesn’t seem like much. Yet the simple rules and straightforward card layout obscure the devilish gameplay.

There are 49 cards, each unique. There are 3 attributes per card, each with 7 possibilities. You get one chance each turn to narrow the field down. Pick the right card to inquire about and you can make a significant step towards solving the puzzle.

Which card is the right one? Well, that’s the tricky part. Each card can share at most one attribute with any other card: there are 7 black cards and 7 solid circle cards, for example, yet only 1 black card with a solid circle. You can’t quite be sure which attribute is shared between your secret card and the Hint you’ve just played without triangulating, so think carefully about what you can potentially learn with the cards in your hand.

Every card that receives a Yes adds more information (“Ah, so it’s either a 2 OR yellow…”) but often it’s the cards that prompt a No that lead you down the right path (“…and it’s definitely not orange, a 7, or a star.”). On some turns you’ll want to throw your net wide while on others you might play a card that shouldn’t match just to confirm your suspicions. Over time you can eventually winnow the possibilities down and make your guess.

How much time you have to do that depends entirely on the other players. If you’re seated with a group of deep thinkers and cautious card-counters, you may be able to build an airtight analysis of your card. If on the other hand you’re seated with a bunch of boisterous competitors who’d sooner go out in flames than let you get it right, you might have to cross your fingers and make your best guess. There’s often a thrilling moment where one player seems to be on the verge of solving their personal puzzle and another player is forced to jump in with a half-baked attempt to steal the game away before it’s all over.

The optional player powers can make a difference too. For example, one of the powers allows that player to stay in the game after their first incorrect guess at the cost of permanently losing 2 cards from their hand. It’s a harsh penalty, but for a player who doesn’t mind the gamble it can easily win the game in those waning seconds. The powers are a nice way to keep the game fresh over the course of an evening or even to give a less skilled player a slight advantage. Unfortunately with only 4 to choose from they do lose their luster pretty quickly. Thankfully Concluzio plays just fine with or without them.

Yo, I’ll Solve It

And that difference is all the difference. The competitive play helps Concluzio stand out from the pack. Racing to beat your friends or loved ones gives this light game a much-needed bite. It doesn’t have to be extremely competitive though; if you and your friends would rather take your time and get the answers right, you absolutely can. Even after the game is done, there’s nothing wrong with letting the other players make their best guess or continue playing. Games are quick enough that no one is sitting around long.

It’s easy to learn, it’s quick-playing, and it’s as fun as it is challenging: if you like abstract deduction games, take the hint and pick up Concluzio.

Trekking the World Review – Citizen of the World

Crusader Kings Review – Not That Kind of Euro Family Game

Atma RPG Review – Your Fortune’s in the Cards