Back in the Garage: an Interview with Evan Pedersen, creator of Garage Sale Gamer

If you spend any time on YouTube, you’ve probably stumbled across dozens of Let’s Play videos, where a group of gamers film live footage of their own play experiences with a game. These are great for learning how to play a game, seeing what players like or dislike about it, or getting a feel for what the components look like. One of the newest entrants is Garage Sale Gamer.

Garage Sale Gamer is technically a Let’s Play, but it offers a fun, fresh twist on the format by reaching deep into the closet for classic games, covering only titles published between 1940 and 2000. Knowing that these games may not stand on their own, the show leans into the goofiness and obscurity of its subjects with informative pop-ups and witty commentary. It’s a delightfully refreshing show that doesn’t take itself too seriously. If you’ve ever wondered what it would be like if Mystery Science Theater 3000 and VH1’s Pop Up Video covered board games, you’ll love Garage Sale Gamer!

We had a chance to interview Evan Pedersen, the show’s creator, about why this show stands out from the pack.

Before we start, please take a moment to introduce yourself.

My name is Evan Pedersen. I’ve been a podcaster for almost 12 years, starting the Fancy Pants Gangsters podcast network in 2008 and a gamer since the mid-1980s.

It’s hard to put it down to one thing, exactly. Let’s Plays aren’t exactly new, talking about old games isn’t new, snarky commentary sure as hell isn’t new. I think it’s a lot of little things combining together: the personalities of the host and the guests, the range of games covered, the perspectives we can give on different things. It’s like baking; the ingredients aren’t necessarily anything special, it’s the combination that makes it. 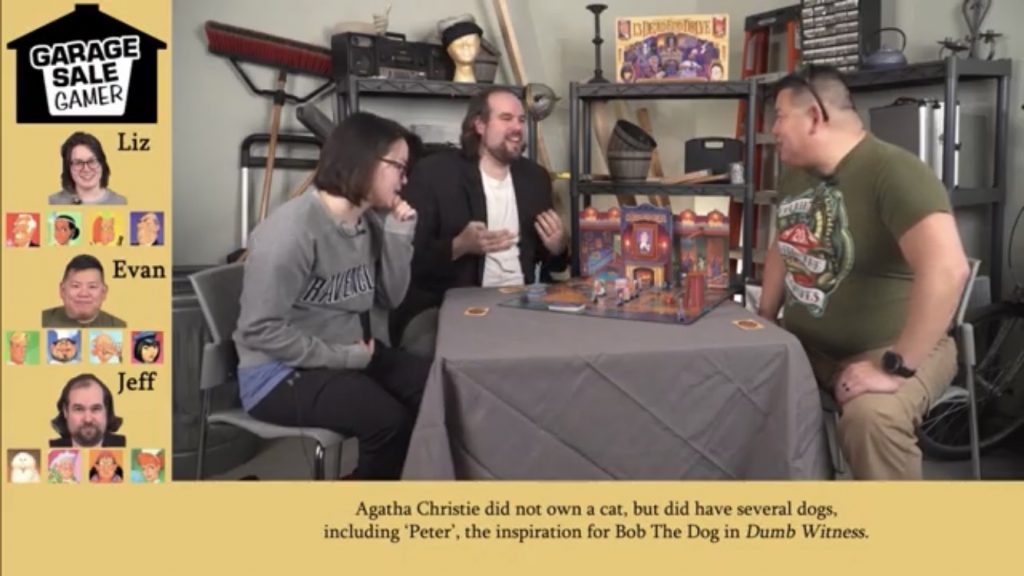 Interesting bits of trivia and running gags add an extra layer to the show.

How did the idea for Garage Sale Gamer come about?

Like I said, I’ve been a podcaster since 2008, but always in the realm of audio. I’ve wanted to do a video show for a long time but I wanted it to be something that took advantage of video, that wasn’t just a bunch of people sitting on Google Hangouts looking at a camera like the Brady Bunch opening. I’m also a huge boardgamer, and I’ve wanted to do something with games since I started the network. The idea actually started out as a more educational show, kind of a Good Eats of boardgaming, which would delve into more of the history and science of boardgaming. As I was working on that, life kind of got in the way and my ideas overshot my budget so I wanted to simplify it.

As part of my research for the original show, I was finding all these interesting connections between modern boardgaming and earlier games that I wanted to explore, and as a garage sale hound I had built up a decent collection of older games that we could work with, so I figured we can cover a lot of same topics with a much smaller budget. We shot a pilot with me as the host and a legitimately awful game that I won’t mention right now because we’ll likely be revisiting it on the show. That proved the ideas that worked really well, like bringing on the “expert” guest and the public-access aesthetic, and what didn’t, mostly being me as a host. I’m a radio/audio guy and too much into the weeds of production to make a good host, so I brought on my podcast buddy Jeff Roberts Gyllen to host. He’s a long time performer in the local music and improv scenes and a big time gamer, so he was a natural for the gig. We shot the second pilot and were really happy with the result. 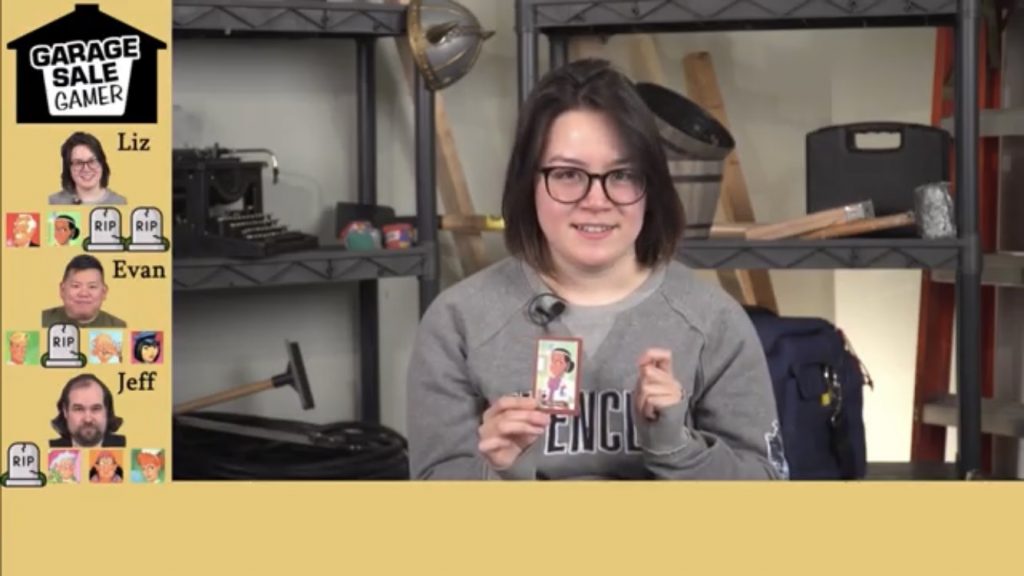 The pilot episode makes extensive use of one-on-one segments to add more intrigue.

You’ve said that the show will cover games from 1940-2000, which is a pretty broad range. What is it about these years that makes them stand out? Put another way, what might the games on Garage Sale Gamer have in common (if anything)?

That’s roughly what I call the second age of boardgaming, at least commercially. You had the first age, which ran from the early 1840s until the Depression, then post-WW2 to probably the CD-era of video games, and now today. That middle period is fascinating in a way because you’ve got the first instances of truly mass-market games, cut off from the moral lessons the early games were big on, coupled with modern manufacturing techniques and mass media advertising with television. You see some really crazy stuff in this time, especially as you get into the 60s and 70s where companies had more plastic than sense, but they’re weirdly innocent about it, not like today where you can make an ironically weird game and the joke is part of the appeal.

On top of all that, those games are the ones that a lot of our audience remembers playing, or seeing commercials for, so there’s obviously the nostalgia factor there. It’s always fun to revisit a game you haven’t played or even thought about in a few decades, and see where the little nuggets of brilliance show up or where the horrific, of-the-times kinds of things pop out.

Lastly, games from that era are the easiest to get a hold of. I’d love to do a show with a copy of Mansion Of Happiness from the mid-1800s but for some reason I can’t find a copy lying around in anyone’s garage.

One thing I appreciated about the pilot was that it felt lively despite the game itself being underwhelming. How do you keep the performers’ energy levels up when a game isn’t particularly fun?

A lot of that comes from the performers themselves, Jeff in particular. He’s one of those friendly, bouncy guys that you just want to slap most of the time, but properly focused he can be very useful. And we’ve been lucky with the guests we’ve got lined up as well. But I think it also has to do with the games we pick. The GSG crew, which consists of myself, Jeff, his partner Shea and our director/DP [director of photography] Keith, have game testing days where we whip through a bunch of games in an afternoon and find ones that would be interesting to show. Either we find some legitimately great games, or if we find bad ones, they have to be bad in the right way. A few people have made the comparison to MST3K, and I think that’s valid. They didn’t just do any bad movie; they did ones that still had enough hooks to be able to make jokes about. Our show won’t just be about bad games, though. Just interesting ones. 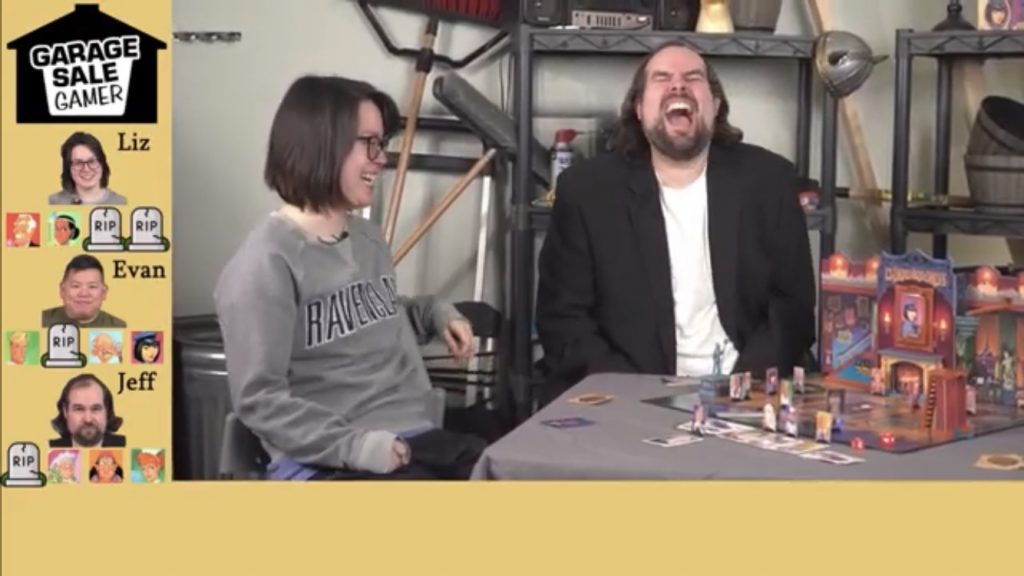 There’s a lot of nostalgia tied to a concept like this. What was your favorite game or gaming experience from childhood?

Bar none my favorite game growing up was Talisman, specifically 2nd edition, which came out in 1984 I think. By every modern criteria, it is a terrible game. Basic roll-and-move, runs way too long, not a lot of actual choice. But I have played thousands of hours of that game and I love just how 80s Britain it is at times. My family had a copy, and I harassed the aides of my after-school daycare program to find one so I could play it there too. I still have no idea how they found one (this was early 90s by that point) but when they did I basically ran daily games for the other kids.

What kinds of games do you personally enjoy playing the most as an adult?

Anything that tells a good story. One of my absolute favorites is Dead Of Winter, and I dig Tales Of Arabian Nights, although that has a lot of the same issues that Talisman does. Also anything that doesn’t reward a lot of planning, mostly because I’m really bad at that. I’m hot garbage at any sort of economic game, and something like 18XX is the stuff of nightmares for me. A healthy amount of chaos is always ideal, which is why I also love Cosmic Encounter. I’ve been trying to grab a copy of the original one from the 1970s. For the show. Yes. For the show.

Are you able to give us any information on what games or topics we might see in the full series?

Well there’s the aforementioned “horrible game” we did on the cursed first pilot. Jeff wasn’t around for that so it’ll be fun to see how he takes it. I’ve got a Charlie’s Angels game from the 70s that looks intriguing, but I haven’t tried it yet. We’ll probably do at least one dexterity game like Dynamite Shack where people put on big plastic thumbs to stuff dynamite down the chimney. I just grabbed the All My Children boardgame that TSR released in the 80s, I’ve heard very good things about that.

Depending on how the Kickstarter goes, we’ve got plans for other segments too, like revisiting that Good Eats idea I originally had, or showing off people’s collections. I’d love to make a trip out to the Museum Of Play in Rochester, NY and film that. And more episodes, more games of course.

Is there anything else we should know?

I’m a pretty pessimistic guy, especially about my own stuff, but we have an awesome team working hard on a cool idea that a lot of people that I respect are getting behind, so this is the most excited I’ve been for a new show in a while. I think it will resonate for people, and I can’t wait to show off what we’ve got in store.

Head over to the Kickstarter now and check out Garage Sale Gamer. You’ll be glad you did!