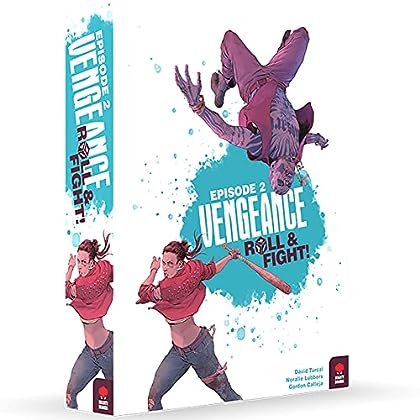 Vengeance: Roll & Fight is a real-time, roll-and-write game, where the frantic action around the table mimics the kick-arse fighting action in the game-world! Set in the world of Vengeance and designed by Dávid Turczi, Noralie Lubbers and Gordon Calleja, Vengeance: Roll & Fight is a stand-along game that transforms the fast-paced dice puzzles of the original Vengeance into roll-and-write mechanics where you’re building combos, striking off enemies and scoring points for an action-packed, brain-teasing fighting game that’s easy to learn and hard to master.

The aim of Vengeance: Roll & Fight is to infiltrate a gang den, carve your way through it’s rooms and killing the Boss, while completing side objectives printed on the dens themselves.

The game is split into three parts: planning, fighting and montage. In the planning phase players roll and re-roll 4 dice in real time, aiming to roll a combination of dice that match an ability they wish to trigger in the upcoming, fight phase. Assigning dice to an ability allows players to fill their hand back to 4 dice from a large, common pool and repeat the process as quickly as they can manage.

Once the dice pool is depleted, the fighting proper begins. Here players take a set of dice assigned to an ability and execute that ability, moving their piece through rooms full of enemies, and crossing them out when they are hit with the multitude of available abilities. Finally, players heal and upgrade their characters, bring new abilities and items into play to help them on their road to vengeance.

Vengeance: Roll and Fight comes in two boxes: Episode 1 and Episode 2. Both episodes are stand-alone games with the same rules, but with entirely different content: different heroes, dens, bosses, abilities and items. Each episode accommodates up to 4 players so combining the two increases the player count from 1-4 to 1-8! Content in both Episodes can be switched like-for-like as you choose.

Justin reviews Vengeance: Roll & Fight—Episode 2 in the time it takes to play the game!