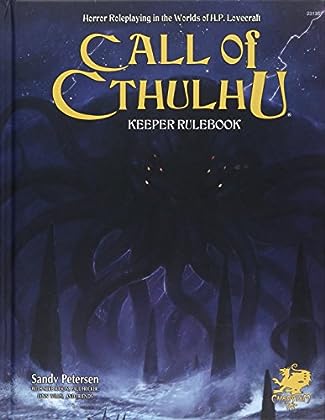 Welcome to the world of the Call of Cthulhu: The Card Game, a world based on the weird fiction of H.P. Lovecraft and his literary circle. In this world, conflicts rage between cosmic powers who want the world for their own unfathomable purposes and the human agencies dedicated to stopping them.

The weird world of H.P. Lovecraft's Cthulhu Mythos has drawn in fans for more than eighty years, with its richly painted themes of suspense, adventure, and the eerie unknown. Call of Cthulhu: The Card Game is fully immersed in this world and what is more, places you, as a player, in control of some of the facets of that world.

A typical game of Call of Cthulhu plays very quickly between two players and it has a high-level of player interaction, analysis of open information, planning and strategy. There is a wide variety of possible combinations of factions (Syndicate with Agency, Cthulhu with Hastur, etc.) and each combination will necessitate a different, challenging approach, providing high levels of re-playability.

One of the major appeals of the Living Card Game® format is that it gives you not only a solid game experience, full of strategy and excitement, but it also allows you to customize your gaming experience to your liking. As you customize your deck from the Call of Cthulhu: The Card Game card pool, you get to build a strategy around your personal play style.

FFG ended development and organized play support for the game in 2015. "That is not dead which can eternal lie, and with strange aeons, even death may die."

Buy Call of Cthulhu on Amazon