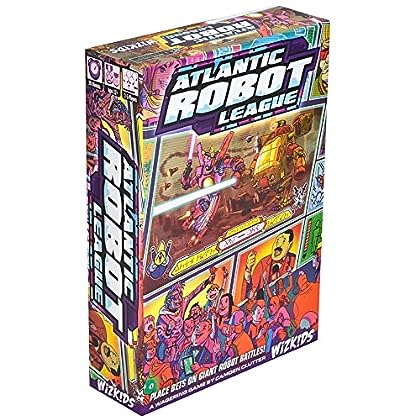 In the far future a new sport has swept the world: giant mech battles! Mile-high giants fight across entire city blocks. Rabid fans wear their favorite team's colors and gather in virtua-bars to watch the battles. It's the perfect time for a savvy gambler to get filthy rich...even if you have to cheat just a little bit.

In Atlantic Robot League, players place bets on the outcome of a massive mech battle the size of a dozen city blocks. After bets are placed, they get the chance to influence the battle by sliding the mechs across the arena, knocking out rivals, and buying scheme cards from the insider to bend the rules. Particularly devious gamblers might even pay the fixer to change their bets during the battle.

Occasionally your opponents will be helping a shared bet; occasionally they'll be knocking out mechs you need to survive. Since all bets are hidden, you won't know until the end and might even be able to bluff an opponent into accidentally doing exactly what you want.

Five mech teams face off, each with three robots, and in each of three rounds, you bet on which team will have the most surviving mechs, which will KO the most mechs, which team will be eliminated first, and which five robots will be standing at round's end. The fewer the players who bet correctly, the bigger the payout for those who do. After three rounds, whoever has bet best wins.