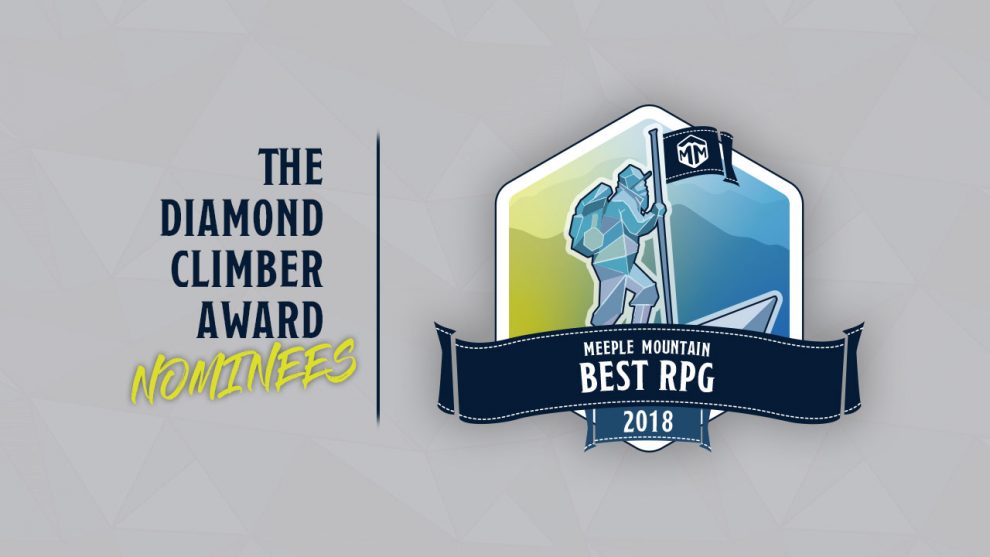 Than Gibson
Add Comment
Join us as we review the 2018 RPG nominees for the Diamond Climber, the 1st Annual Meeple Mountain Board Game Awards.

2018 has been a great year for roleplaying games! With the global success of Dungeons & Dragons’ 5th Edition, role-playing games have become more popular than ever and with that comes a whole batch of new RPGs with innovative systems and fantastic settings and themes. These are our nominees for best RPG of 2018. 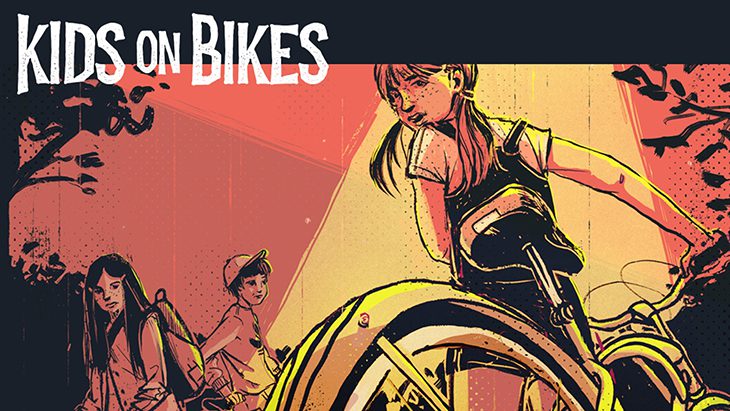 “Kids on Bikes is a Collaborative Storytelling RPG set in small towns with big adventure! In Kids on Bikes, you’ll take on the roles of everyday people grappling with strange, terrifying, and very, very powerful forces that they cannot defeat, control, or even fully understand. The only way to face them is to work together, use your strengths, and know when you just have to run as fast as you can.”

Capitalizing on the success of properties like Stranger Things, Kids on Bikes allows you to play as ordinary people (not just kids) encountering extraordinary things in their own everyday world. The system is simple and flexible enough to let you pick the genre of your choice. You can also play with the optional Powered Character to give the characters an ally to even the odds in those clutch moments.

Overall, Kids on Bikes is a great system for diving into some nostalgic-era roleplaying. 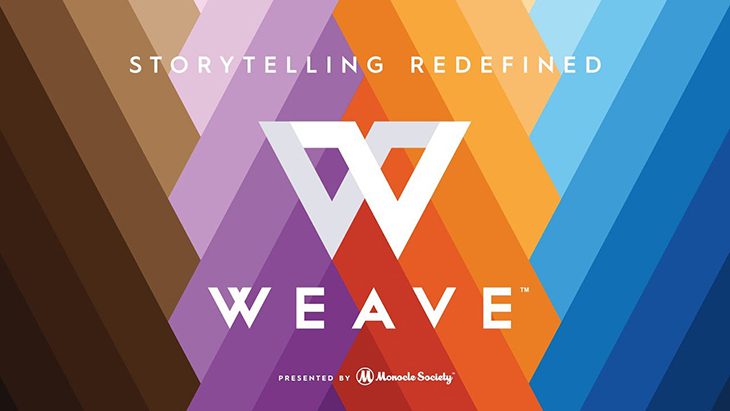 “Weave is a 21st century storytelling platform for everyone. With just two decks of cards and a handful of dice, you and your friends can create adventures in any genre, from sci-fi to high school comedy. When combined with the free companion app, Weave provides all the power you’ll need to discover new worlds, imagine amazing characters, and save your stories online in minutes.”

Weave is an innovative RPG-style storytelling framework. Utilizing cards and an app, you can tell stories in a shared narrative form. Rather than one set genre, you can build your stories in any genre you like. The beautifully designed cards are universally used in all aspects of the game, from character creation to the actual play mechanics. The app keeps track of the game and helps translate the cards through the mechanics. There are two rulesets: a simplified Standard set that can be jumped directly into and t. The Advanced version which allows for customization and also has mechanics for Wounds and Healing.

If you are looking for something fresh in roleplaying games, Weave is it. 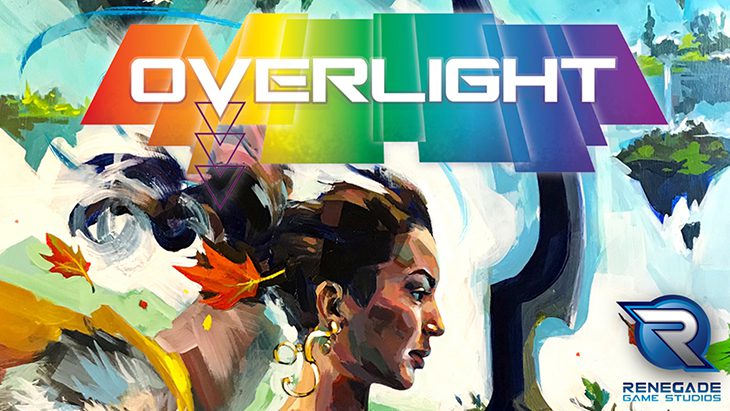 “Overlight is a fantasy roleplaying game of kaleidoscopic journeys: a visceral, dangerous, and brightly-colored setting. Characters will search for personal meaning among a fantastic, sometimes violent, and overwhelming world.”

Overlight takes place in a world where seven continents called Shards hang suspended in space, a bright white light above, and an utter darkness below. Each Shard also has its own unique people and virtue all represented by a prismatic color.

This setting is beautiful with its emphasis on light and the virtues it takes to make a better world and is one of the beautiful standouts of the year. 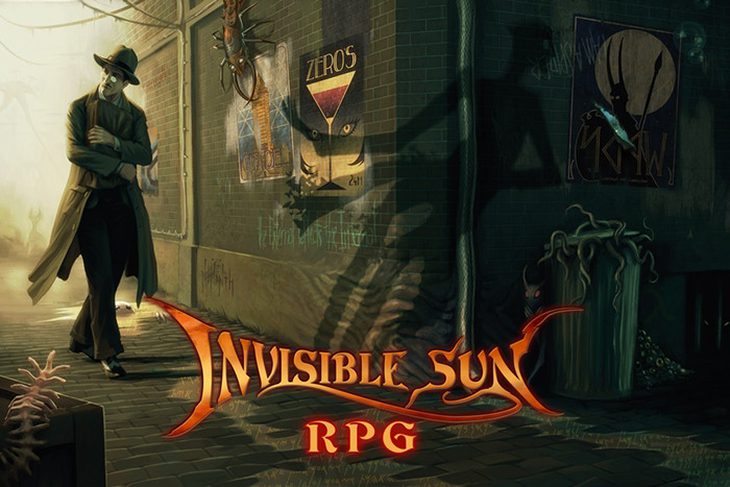 “A roleplaying game of surreal fantasy, secrets, and magic that is truly magical. Wield fabulous powers as you uncover the secrets of reality itself.”

Invisible Sun is a deluxe roleplaying game with a large set of playing materials that comes in a large Black Cube. Likewise, the setting is deluxe as well. There are overlapping worlds that explore surrealistic themes of what is real and what is only a shadow of existence.

It is a very character-focused game. The players create their characters with their own specific drives and goals. As these drives and goals are brought together, the story of the game is created. The game master facilitates the story by weaving the stories together.

By far, this is the most robust roleplaying game to come out this year. With its detailed setting, complex rules, and large amount of play materials, this is a game designed with experienced gamers in mind. If you are up for it, Invisible Sun promises to be very rewarding to those who look into world of the Actuality. 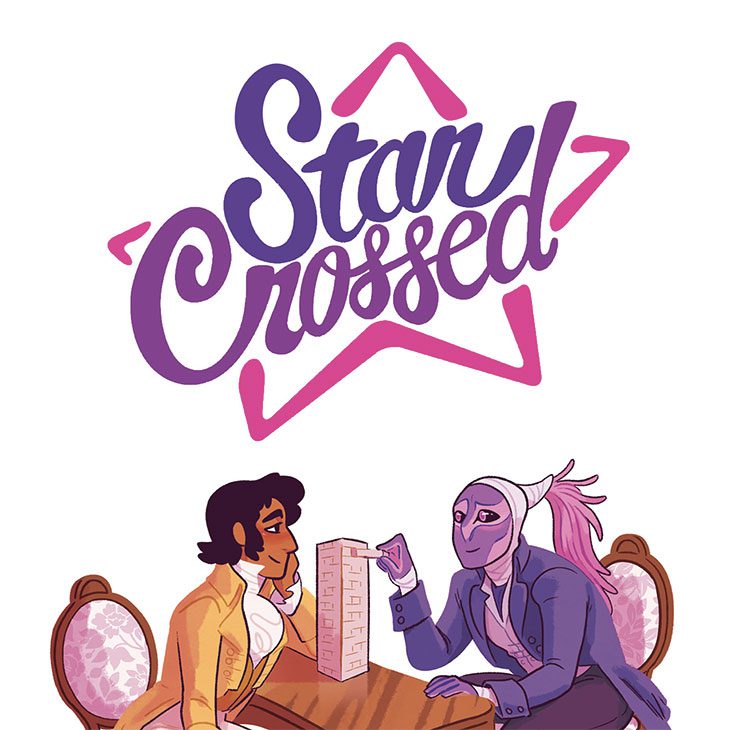 Star Crossed is the latest in a series of role playingroleplaying games that use a Jenga-style block tower to create a shared narrative with growing tension from the threat of gravitycomplications and an impending sense of doom. In this two-player game, you and your fellow player create characters who are impossibly attracted to each other but seem fated to fail in their love. As your attraction for each other increases, you pull more blocks out until the tower falls. The number of blocks that were pulled out determine on whether or not you succeed in love or fail miserably in a cloud of ennui.

Star Crossed is simple but allows for an incredibly fun game that explores a genre rarely touched in RPGs: romance! It’s also a unique use of the Jenga Tower mechanic which has so far been mostly successful in horror games. Read our interview with Alex Roberts, the designer of Star Crossed. 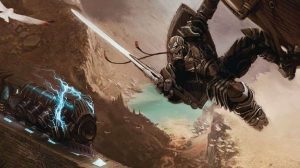 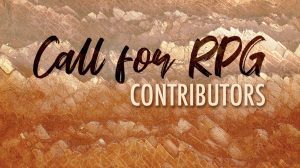 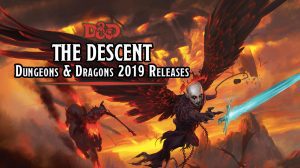 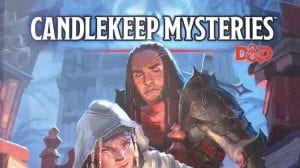