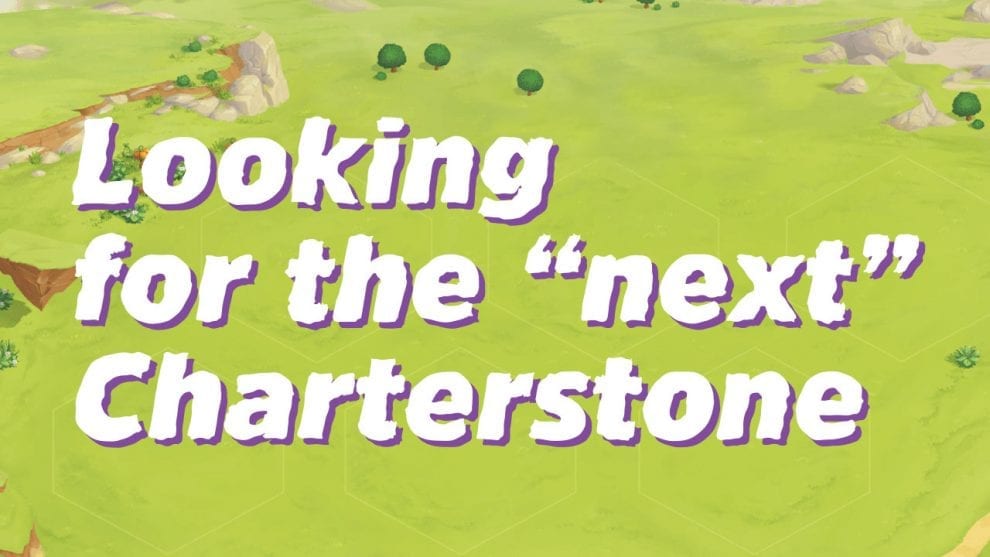 Bob Pazehoski, Jr. @bobpazjr
Add Comment
One year after completing our grand family campaign, I’m on a (spoiler-free) quest for a game that can match - and perhaps build upon - Charterstone’s unique high points.

Rather than mislead you, I should say from the beginning that I do not believe Charterstone to be a perfect game. Far from it. In fact, if I’m being totally honest, there are several irksome flaws. Nonetheless, I still find myself scouring the planet to find the next Charterstone.

Allow me to explain. 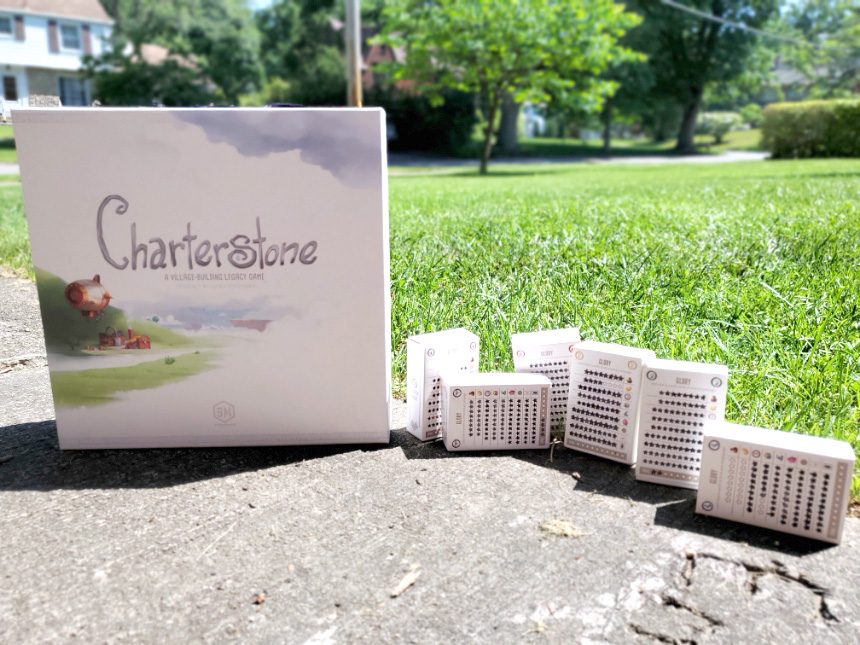 I bought Charterstone because it is one of the most beautiful boxes on the market. Be honest, at some point along your hobbyist journey, you’ve done the same. I’m a fan of clean, white space highlighting whimsical graphics. (Obviously my shelf holds copies of Tokaido and Topiary, and will one day hold Nidavellir) Mr Cuddington knocked the proverbial it out of the park with Charterstone, and there wasn’t a single session in which I wasn’t thankful.

I bought Charterstone because I have five children, four of whom are quite capable gamers. My twins, now thirteen, celebrate victory over dear old dad with regularity, especially in the realm of engine-builders like Fantastic Factories or Century and skirmish games like Unmatched. My oldest daughter, now eleven, is nearly unbeatable in Dice Forge and a perennial contender in Everdell. Just last week, my eight-year-old beat me in our first game of Chai. Even my three-year-old can dominate Take the Gold like it’s her business. My wife and I have a household of gamers, and we love it. They were ready for a grand adventure, and Charterstone offered a six-player event. 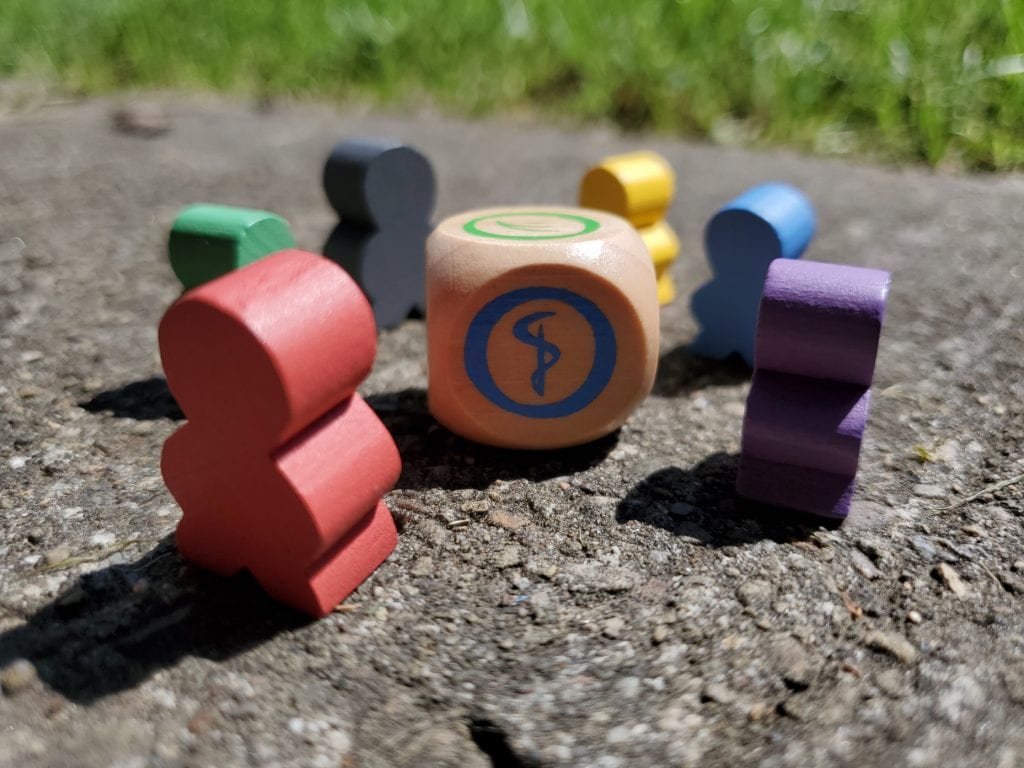 I bought Charterstone because I wanted to enjoy a boatload of time with my family. Ordinary people can play through a session of Charterstone in an hour if they are focused. My family? Nearly three hours. Every. Single. Time. Not because we didn’t know what we were doing, but rather because we did. Eventually my then seven-year-old figured out how to move the Progress Track token backwards, and did so no matter how late it was or what mixture of disgruntled expressions he received in return. And besides, what is a game if not an opportunity to spend almost too much time at the table with folks you love? Charterstone equaled thirty-six (yes, you read that right) irreplaceable six-player family hours.

I bought Charterstone because I wanted to rope everyone into an experience. I wanted our family to anticipate the table, to come with a certain excitement that can only come when one session builds to the next. I wanted them to see how story can integrate with play, and how they can build something all their own on a game board. Granted, Charterstone has received mixed reviews regarding its place on the all-time legacy game countdown (which, while impressive, is still far too short), but there is no denying that legacy games of any flavor carry a certain thrill that cannot be matched by simply playing the same game a dozen times. 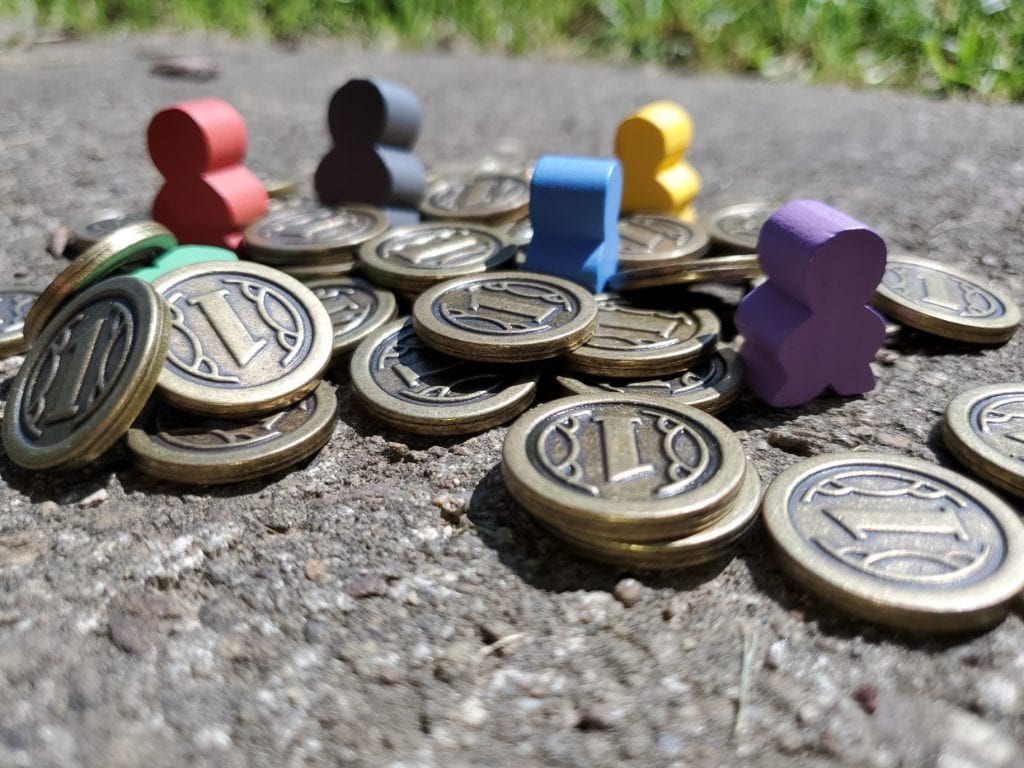 I bought Charterstone because of the allure of playing the game even after the campaign was finished (it’s the reason it landed at #89 on our list of the 100 most important board games of the 2010s – Charterstone was the first legacy game to supposedly be indefinitely playable). Granted, I knew I would have to wait until enough friends had also played the campaign so that they could join us without suffering a spoiled experience, but the possibility existed, so I was excited. After we finished and realized just how unplayable the finished board was (let all who have played a full campaign understand), I was exceedingly grateful for Tom Vasel’s insight that the Recharge Pack could be used not to play the game again, but to build an ideal board that could withstand repeated plays for folks other than those who played one specific campaign on one specifically sentimental board.

When I say I’m looking for the next Charterstone, I say so because I am looking for a beautiful (preferably with lots of white space to let that beauty breathe), high-player-count, high time-investment experience that might have enough charm to linger. 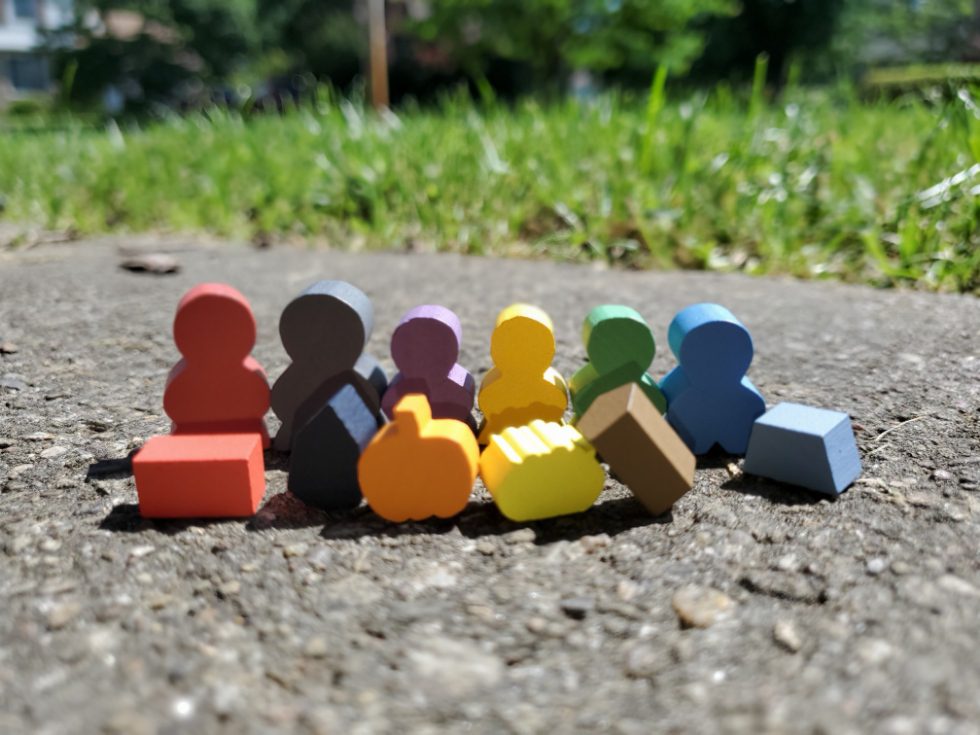 When I say I’m looking for the next Charterstone, I say so also because I believe Stonemaier Games inadvertently introduced a golden experience and opportunity that should now be explored by designers and publishers everywhere. I believe the discovery was inadvertent because it was not the focus of the marketing, and has not been the focus of enough reviewers. Most reviews follow the line of comparing the legacy experience (AKA the bleh story) of Charterstone to that of its outstanding contemporaries such as Pandemic and Clank, an exercise that will quickly and forever reduce Charterstone to a thirty-six hour “maybe” nearer the rubble than the pinnacle of the legacy mountain. But there is indeed gold in them there hills if the true prospector is looking. Charterstone’s gold is not to be found in its story.

I want the next Charterstone to realize the value of a game that teaches itself to willing players over the course of multiple games. Session One of Charterstone has little more than two laws: place thy worker, retrieve thy workers; in between, do whatever the board tells you. It’s so easy a seven-year-old can attempt meaningful decisions. By the end, the game has taken on several more mechanics of varying complexity, but at such a gradual pace that an attentive seven-year-old can still attempt meaningful decisions, even if total victory is an impossibility (for the record, he did not finish in last place). Were I to attempt to teach my children all the mechanics of the finished game from the first session, the beautiful white box might have remained on the shelf due to sheer intimidation. Instead, we all learned (at a manageable pace) a game full of interesting decisions and strategic opportunities. My family is a stronger group of gamers for having walked the gradual road together. I hope publishers see the value of using legacy/campaign experiences to teach more complex games and build interest in the hobby. 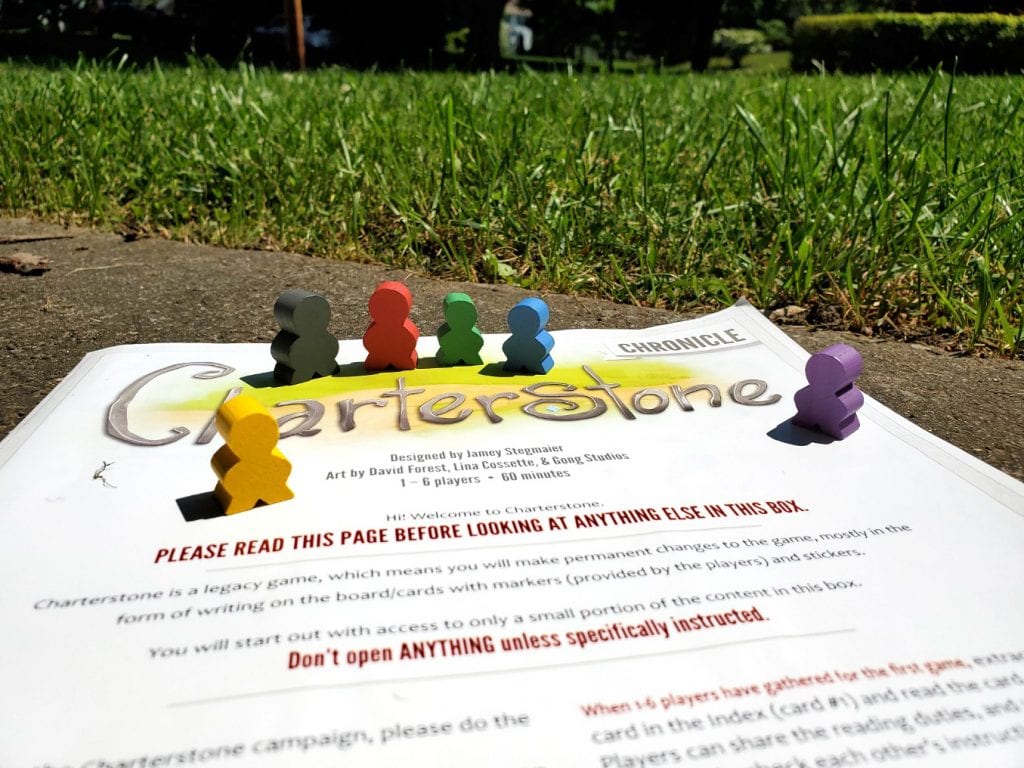 I want the next Charterstone to mean it when they say the game can be played, in full, forever. There are spaces on the Charterstone board that become useless after the campaign stickers are spent – important spaces that no sticker can repair without a thoughtful and premeditated change to the core game mechanics. A truly lasting experience would have planned for this obsolescence and included the appropriate rule changes to set up the future. Yes, we are clever enough and understand the game enough to house-rule the future; but as publishers pursue these teaching, growing tabletop journeys, they should just go ahead and playtest the enduring endings so that we can all be sure they work. It seems that Charterstone emphasized the legacy experience with satisfying-if-mediocre results where they would have seen greater fruit to emphasize the potential excellence of crafting the lasting experience.

Similarly, I want the next Charterstone to realize the value of making the idealized finished product part of the legacy gaming experience. By the time we had finished the final session, there was no doubt as to what the ideal board might look like. The reality of the legacy experience, however, is that sacrifices are required. Pet engine components must eventually be covered in the name of attempted victory. Those same pet mechanics, while a hindrance to the thirty-six hour score, must be revived for the enduring experience. Rather than selling a recharge pack on the premise of investing another day and a half in a bleh story that will reach a similar culmination, why not simply include a separate book of stickers – to be opened at the conclusion – that enables the creative rebuilding of a balanced world? This allows groups and families to truly own the experience by building their own playable future at the end. What a distinct gift! 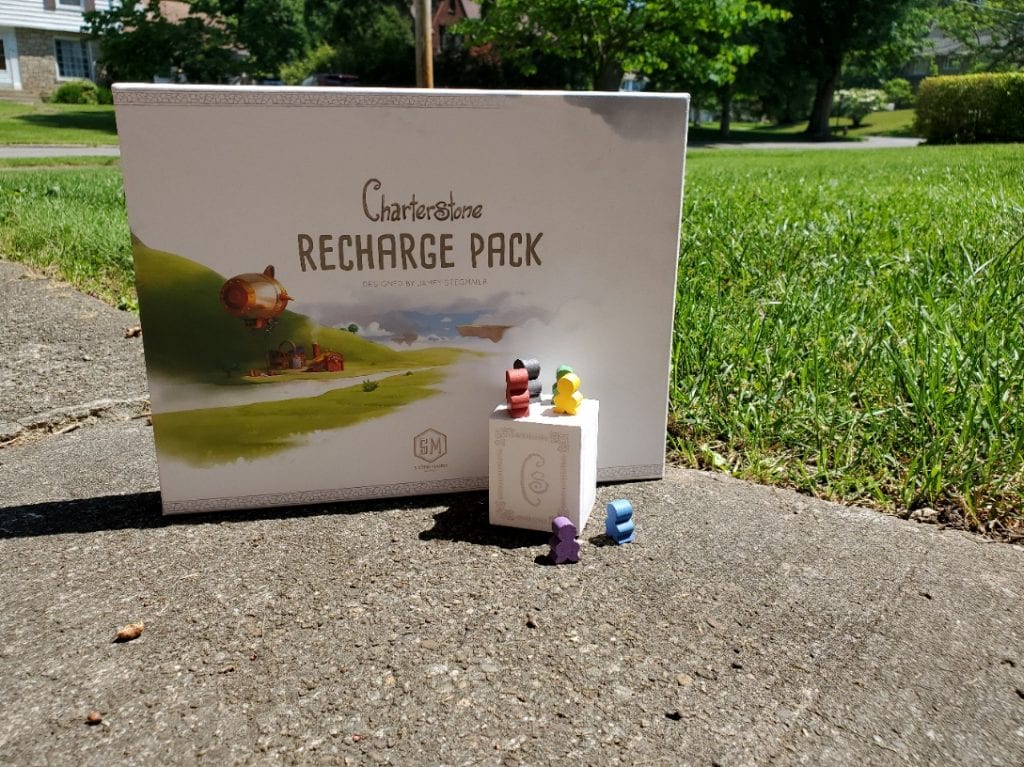 When I say I am looking for the next Charterstone, I say so because I am looking for publishers to use built-in game experiences (as much as or more than the rulebook) to teach their games, while designing from the beginning the enduring experience that allows the players take up a certain amount of agency in determining that enduring experience. To be honest, this is why I am so forgiving of Charterstone’s bleh story. Single-use legacy experiences are all about unpredictable twists and turns (WOW moments). Lasting experiences are about a thoughtfully developed product that might see the table for years to come. One recharge pack and a few house rules later, we’ve almost achieved that goal, but I believe it could have been done better by the designer.

So what am I asking?

That publishers would reimagine the idea of legacy and campaign games to include within the experience the possibility of learning and pseudo-engineering a lasting investment. I might be off my rocker, but Charterstone proves the idea to be possible. The question is whether it is feasible. In the meantime, I’m thankful for the light bulb that Stonemaier Games has set off in my mind. I doubt I’m one to design such a game, as I know it is immense in scope, but I’ll be near the front of the line to purchase. I think there is gold hidden in the beautiful white box if other publishers are willing to sift through the (charter)stones to find the rich stuff amid the rubble.

(If my planet-wide scouring has missed a title that will fit my oversized gaming crew, or if a designer/publisher is bold enough to say I’m on to something, or if anyone wants to lob excessive criticism, I’d love to hear such thoughts below!) 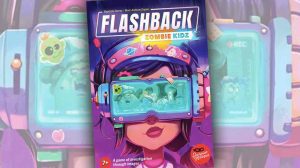 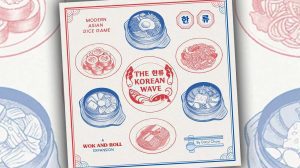 A follow up to the Asian-restaurant-themed original, Origame is back with Wok and Roll: The Korean Wave. Join Bob for a peek. 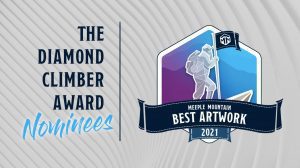 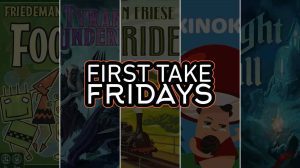