Unmatched; or is it? An Unmatched Review 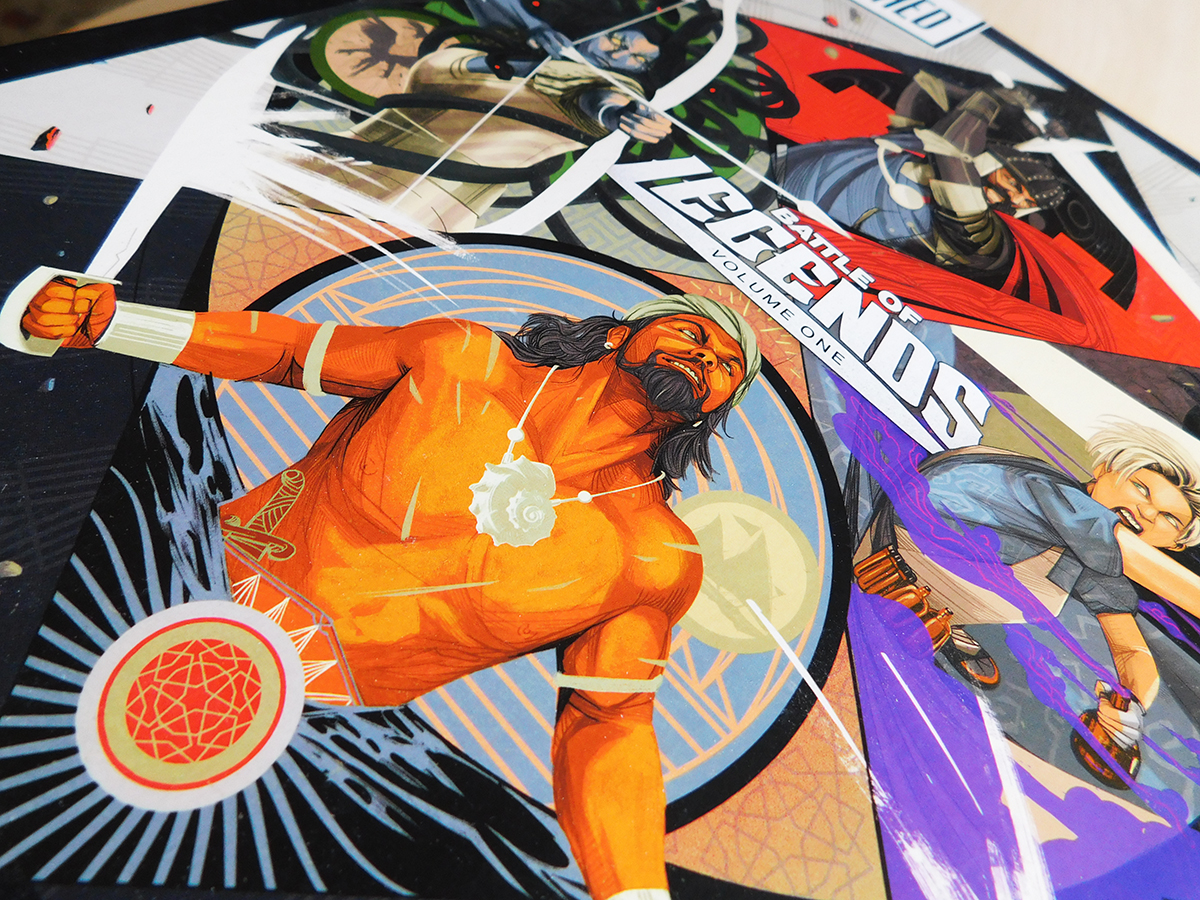 A Box of Nostalgia

When I was a kid – I’m talking 6 or 7 years old – my older brother and I had an action figure bucket. This was wholly separate from my collection of Teenage Mutant Ninja Turtles and it pre-dated the G.I. Joes I would start to gather as I neared my teenage years. Rather, this bucket was a kaleidoscopic hodgepodge of figures and characters gathered piecemeal from garage sales, flea markets, and assorted birthdays. In this box you could find He-Man and Skeletor jumbled up with Bucky O’Hare underneath a scattering of Dino Riders, G.U.T.S. soldiers, and Battle Beasts. The hallmark of this box was that it held everything that we only had a few of, as opposed to the toys like M.U.S.C.L.E. men and others that we collected. And it was the best box!

What this mottled collection lacked in cohesion was easily made up for by the precocious imagination of youth. Nevermind the 10:2 size difference between Maxx Steele and the Z-Bots because clearly the former was a vast titan out of space sent to destroy the small, robotic denizens of this strange world. The utter absence of coherence in the box unleashed its potential and we would spend hour-upon-hour of our weekends spent lost in play, be it in the controlled environment of the living room or the vast wasteland of the backyard sandbox. 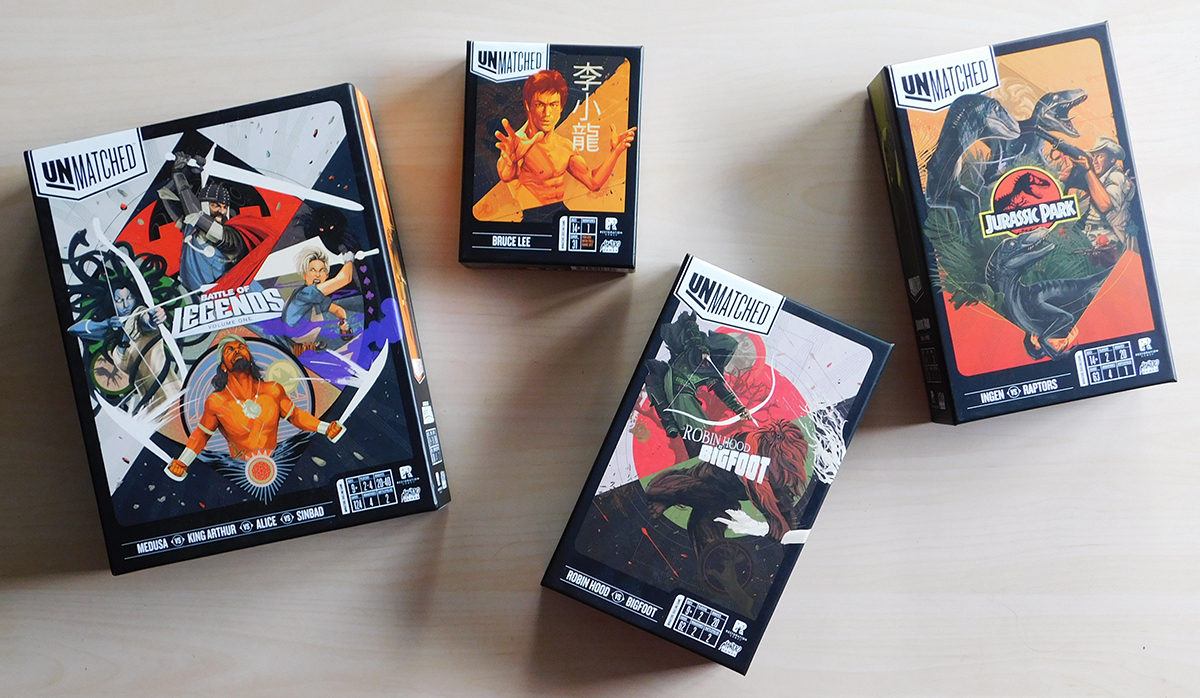 My brother, nearly 3 years my senior, went so far as to turn the bucket into a game for me. Envious of my friend’s Nintendos and unable to have one of my own, my brother would select figures from the box and, at my “control,” make them do battle like my own variegated version of Street Fighter. “Punch, kick, punch, punch!” I’d shout my commands as fast as possible and he would relay them via the figures in his hands, sometimes defeating me with the other figure and, more often than not, allowing me to bark my way to victory.

I haven’t thought about that box in a long time, and when I talk to my brother these days it’s more often about his daughter, our jobs, and the house he recently bought. But playing Unmatched, the newest release from Restoration Games, brought all these memories flooding back in a wave of wonderful, battle-based nostalgia.

On paper, Unmatched sounds like something that shouldn’t work. It’s a deck-driven skirmish game that pits Sinbad, King Arthur, Medusa, and Alice (of Wonderland) against each other in 1 vs. 1 combat. It’s exactly the sort of the game that I would have dreamed up when I was 8. Heck, if you buy an expansion you can even add Bruce Lee to the mix! It’s insane! It’s audacious! It’s bombastic! 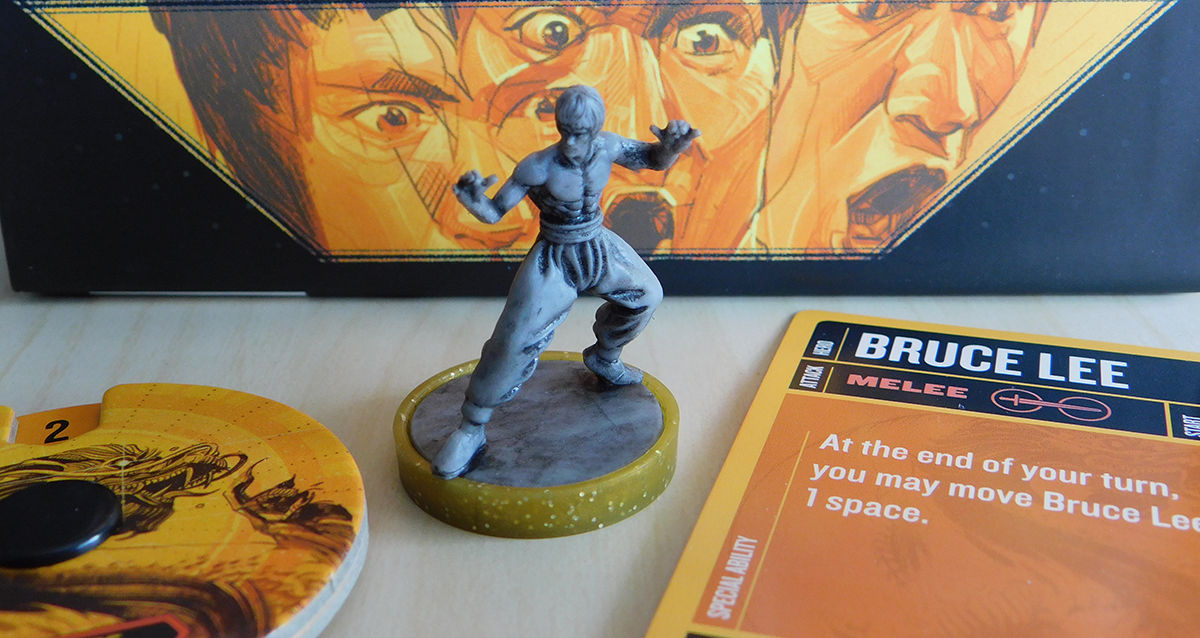 Like everything released by Restoration Games, Unmatched is a redesign of an older game. However, unlike their usual fare, Unmatched takes an existing structure (in this case, Star Wars: Epic Duels) and puts a new theme on top of those existing mechanics. Or rather, a dozen new themes…

Instead of appealing to a single fandom, Unmatched has been redesigned to appeal to the overimaginitive, overambitious child still lurking somewhere deep inside all of us. Smartly, however, Restoration built this ambitious world (or melting pot of worlds, I should say) on top of a clean, elegant framework, and that goes a long way towards keeping the game from getting bogged down in the nitty-gritty. 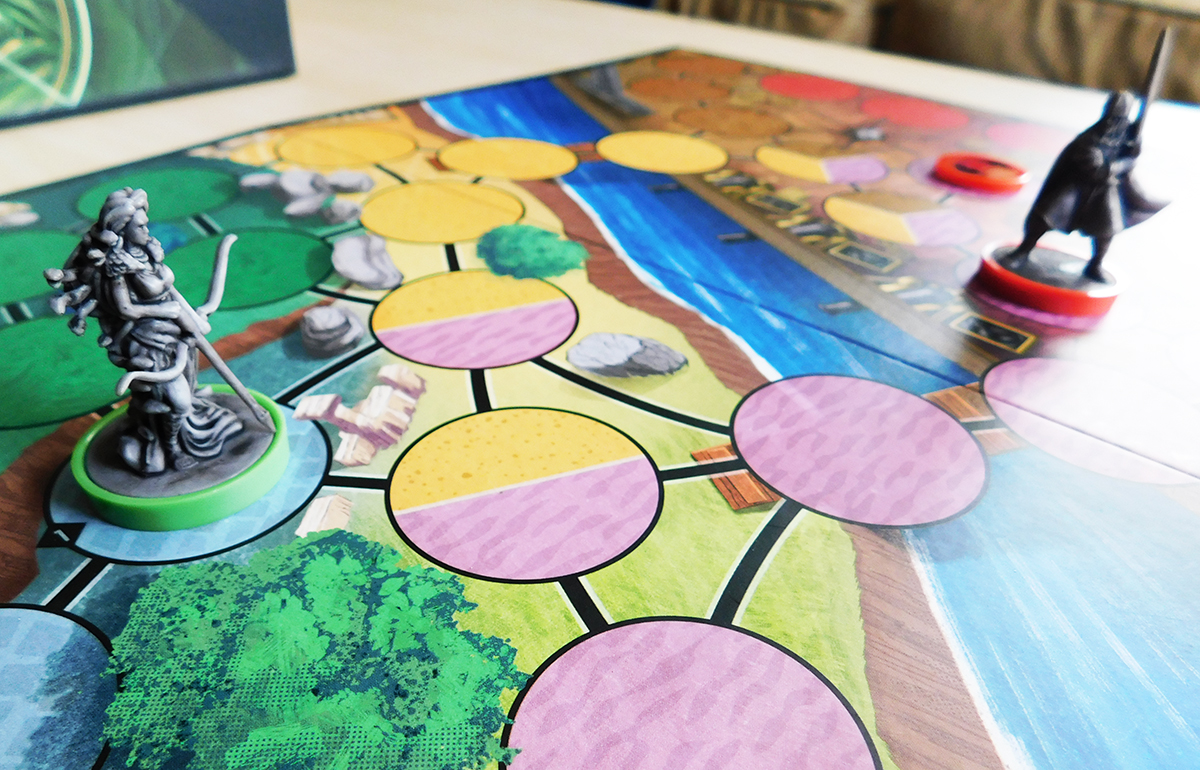 Each player in Unmatched starts with a single, unique deck of cards. They also have a hero and (usually) a sidekick who are both placed on the board in somewhat pre-determined spots. And then you fight. While that may sound a little reductionist, the actual gameplay is hardly more complicated.

Every card in your hand will be one of 4 things: an attack, a defense, a hybrid that allows you to do either, or a scheme. Attacks are simple, allowing you to smack another character for a number (either as a melee or, for some characters, from a ranged distance). Conversely, defense cards work in the reverse, allowing you to subtract a number from an incoming attack, in some cases preventing it entirely. The versatile cards (hybrids) give you flexibility, while the scheme cards offer a mishmash of abilities and options that vary largely based on the character you’re using. 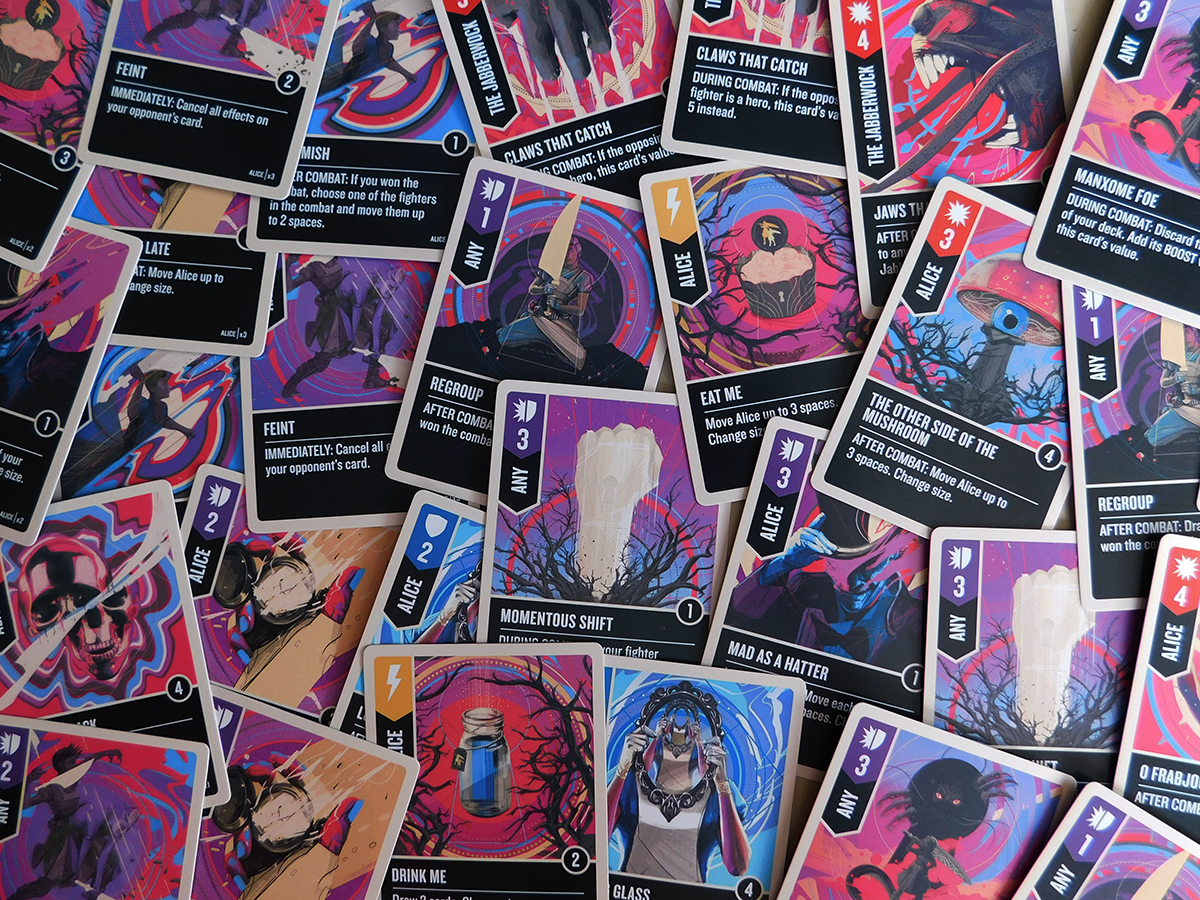 On your turn, you must take exactly two actions (no skipping), which you can choose in any combination (including repeating the same action) from three options. You can attack, which means you play a face-down attack card, the defender chooses whether or not to play a face-down defense card, and then you both reveal and math the results. Second, you can play a scheme card from your hand and execute its action.

The third and final option, and by far what makes Unmatched tick, is the maneuver action. When taking this action, you first must draw a card. Following that, you may move each of your characters any distance up to their printed move limit. Additionally, you may discard cards from your hand to boost that movement.

This is where things get interesting. 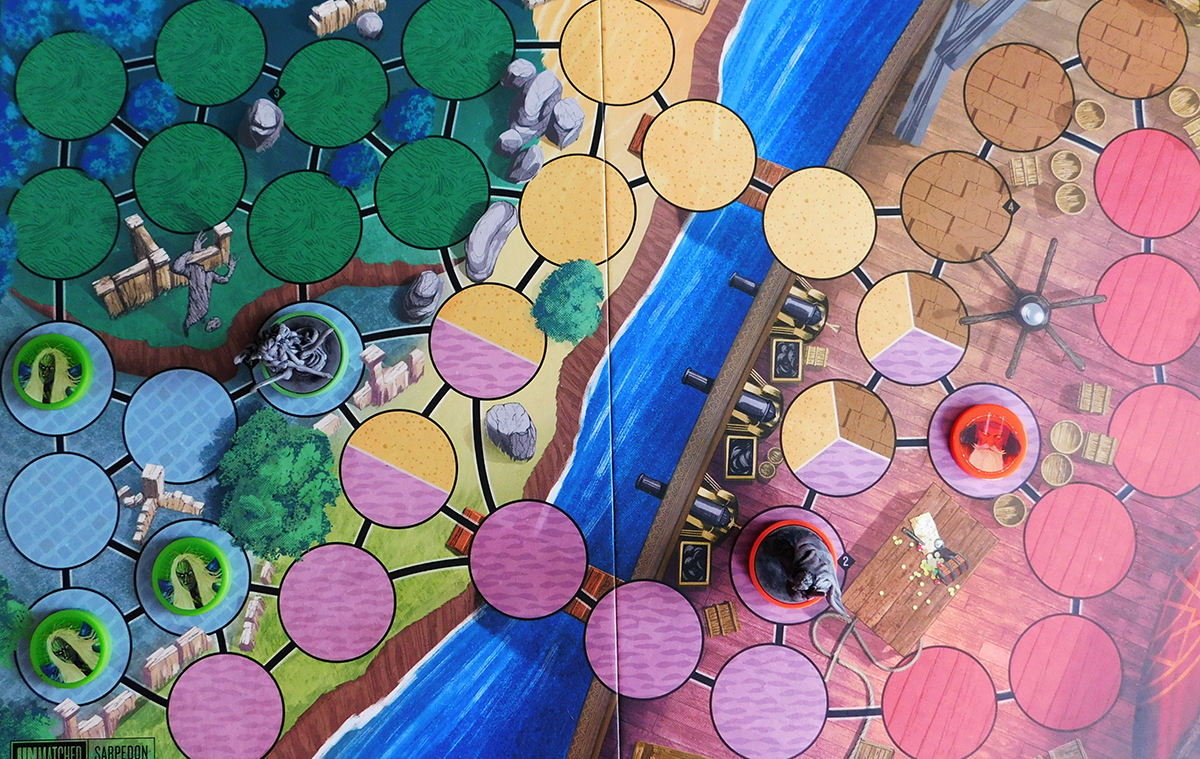 The Dance of Combat

The boards in Unmatched are not large, but they are just large enough to make moving your characters a constant, vexing question. With only two actions per turn, if you move next to your opponent to make a melee attack, then your turn will end still adjacent, setting them up to potentially attack you twice on their turn.

Or perhaps they’re ranged, meaning they can attack any character in the same zone. So suddenly the puzzle intensifies as you sneak and dash your way around the board trying to position yourself to make an attack of your own without letting Robin Hood shoot you from a distance every turn with no hope of retaliation. 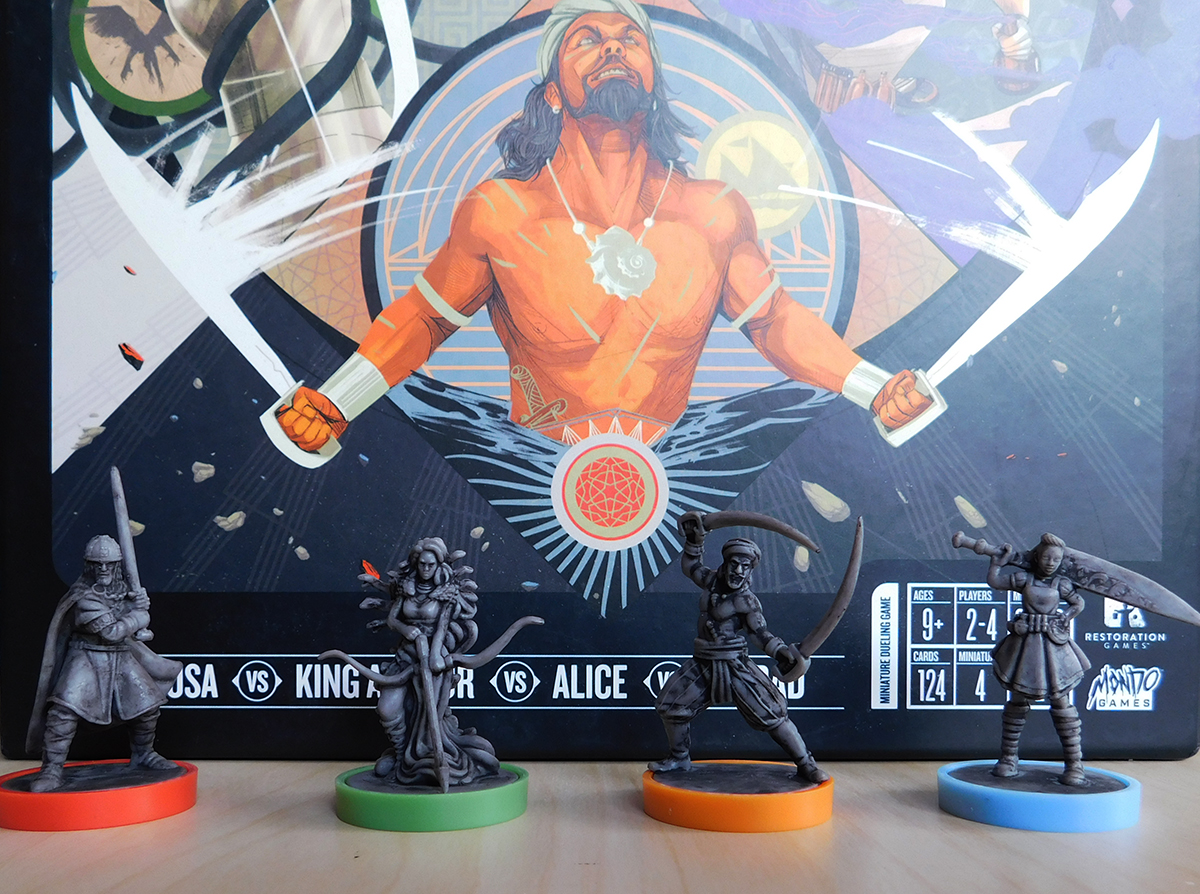 And, like everything in this game, each character will use this mechanic differently. Bruce Lee, for example, is entirely predicated on dancing around the board and staying out of trouble until he’s built the perfect hand to unleash an unending and unstoppable barrage of attacks.

Medusa, on the other hand, deals an innate damage at the start of her turn to one opposing unit in her zone. This may not sound like much, but in a game where landing a clean attack can prove an enormous challenge, this “death by a thousand pinpricks” quickly proves itself viable. If, that is, you can manage to stay in the same zone as your enemy without getting close enough for them to smack you back.

And this brings me back to my thesis: variety is the spice of war.

The mechanics in Unmatched are fine. Solid, even, if sometimes overly luck-dependent. But not inspired. No, what truly excites about Unmatched is the sheer, audacious potential. It’s a sandbox, just like the ones we played in as children, where Bruce Lee can punch a velociraptor or King Arthur can go on a quest to slay Bigfoot.

So is Unmatched a great game? No. But it’s good enough. And it will thrill you, surprise you, and most importantly make you feel like a kid again. And for me, these days, that goes for a lot.