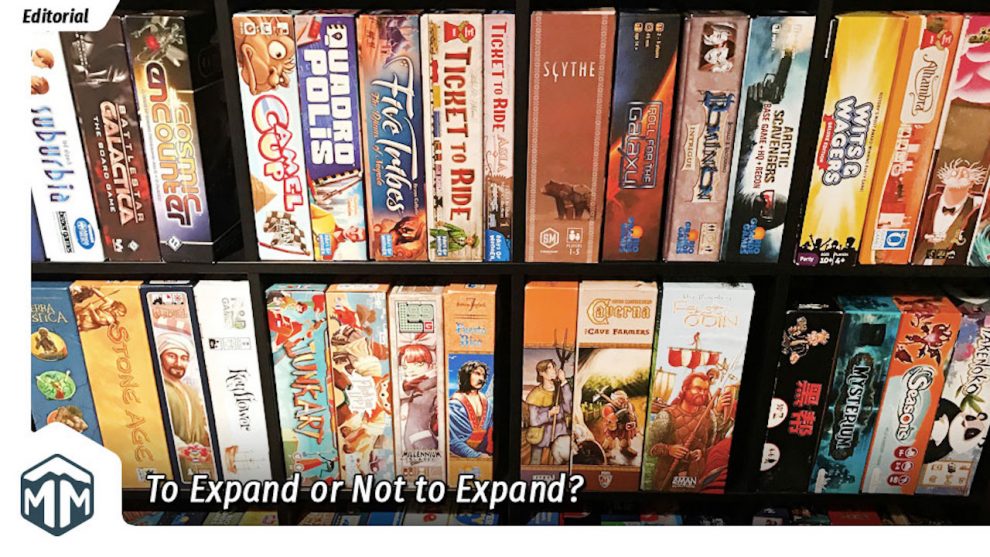 Dave Seiler @gamefondue
Thinking about expanding your game collection? This guide focuses on when and why purchasing an expansion can actually be our best move.

When I was first bitten by the hobby gaming bug, I purchased new games at every opportunity. I avoided expansions altogether because I thought buying a new game would always get me more for my money than expanding one I already had. I was wrong.

Despite my incorrect assessment, I have repeatedly observed new gamers expressing similar sentiments. In what follows, we will lay out guidelines for answering a question as old as gaming: should I purchase a new game or buy an expansion?

Like board games themselves, we get the most out of expansions when we play them. Because of this, the first thing to take into account when making a purchasing decision regarding an expansion is how much table time you expect the expansion to receive. Of course, it is impossible to determine precisely, but we can make an educated guess based off of the following three indicators:

The crowded shelf of a seasoned gamer. He only has room for so many games!

An Expansion Fit for the Game Group

By definition, expansions alter base gameplay. Some strictly introduce new components, while others modify the base mechanics as well. Understanding how a game fits into your collection will help determine the practicality of expanding it. For instance, if you primarily use Stone Age to introduce first-time players to eurogames because of its limited complexity, expanding it may offer you little benefit.

In cases such as this, the added complexity will often fail to significantly enhance the experience of the new players. Expansions that introduce new mechanics typically require additional teaching time and lead to an overall longer playtime. Both of these factors can be off-putting to new players. As a result, you would be unlikely to play this game (and its expansion) at a higher frequency than you did before expanding it.

If you do decide to expand such a game, I would recommend an expansion that adds more variety without any major alterations to complexity. For example, Timeline is a simple card game where players attempt to arrange events in chronological order. It comes in many sets focused on different topics, such as inventions, historical events, and so on. Mixing in multiple sets of cards does not affect the rules of the game in any way. It simply allows you to play for a longer period of time without re-using the same cards. Many new players would not even realize that you had combined multiple versions of the game.

Revisiting our initial example, there is an expansion for Stone Age that adds an entirely new element to the game, namely jewelry. If instead of utilizing Stone Age as a “gateway game,” your group was composed of seasoned Stone Age players desiring games with additional complexity, it would be more practical to expand it in this way. Because expansions typically only make minor additions to base game rulesets, they provide experienced players with new gaming experiences that require minimal explanation. To determine which gameplay modifications would go over well with your group, it is important to be mindful of your collective opinions of the game.

Can One Desire Too Much of a Good Game?

A common misconception among new gamers is that all expansions drastically improve their base games. Consequently, these players expand games in the hopes of “correcting” the elements they did not enjoy. In practice, expansions rarely change a player’s opinion of a game from a negative one to a positive one (or vice versa). Because of this, we will focus on expanding games you (and your group) already like. 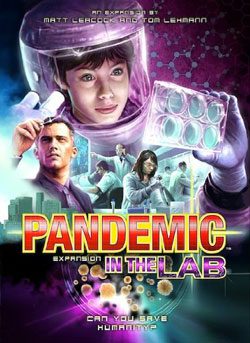 No matter how much we enjoy gaming, our enjoyment of select games will inevitably fade over time. Fortunately, expansions are often able to breathe new life into these games! Before running out to your local gaming store (or just clicking “checkout” on your computer screen), make sure the expansion in question addresses the reasons why the game has grown stale for your group.

Expansions that introduce new mechanics and/or game elements that affect strategy considerations are best-suited for reviving games that you feel are “solved.” These are games that your group plays similarly every time, but still enjoys the feel and flow of the gameplay itself. For this category of stale games, “more of the same” expansions are unlikely to increase your desire to play them. Two of my all-time favorite expansions that have helped me get games back to the table and keep them there are Kingsburg’s To Forge a Realm and Pandemic’s In the Lab.

Alternatively, expansions that provide variety without significantly impacting scoring avenues are great for refreshing games where you feel you have experienced all the base game has to offer. A strong representative of this expansion category is Dominion: Intrigue. Intrigue’s rulebook essentially restates the base game rules, except for detailing the effects of each of its 25 new card types. At the beginning of each game, these new cards are mixed with the base cards and a random group of ten is selected for play. This means without changing the rules, Intrigue establishes 10,269,009,410 unique ways the game could be played. Most expansions, however, will not only increase variety, but will also modify the rules in some way. As long as the changes sufficiently supply enough of what you are seeking, there is a good chance the expansion in question will see plenty of play.

To Thine Own Shelf Be True

If you are willing to toss inserts, many expansions can be reliably stored in the same box as their base game, such as the White Moon expansion to Ghost Stories and the Merlin’s Company expansion for Shadows Over Camelot. When your collection is just starting out, the space saved by choosing an expansion over a new game may seem trivial. However for those of us who do not possess our own personal TARDIS, storage space will quickly prove to be a precious, limited resource.

More importantly than storage space itself are the implications of having large numbers of games. The more games in your collection, the smaller percentage of table time each game will expect to receive. As a result, choosing an expansion over an entirely new game effectively enables you to expand your collection without necessarily reducing any game’s apportionment of table time.

Another critical aspect of collection size is the rate at which it grows. Generally the faster a collection grows, the less time we may devote to experiencing each new game or expansion. Despite coming together to form one game, a base game and its expansions provide separate experiences. With this in mind, you will regularly get more out of an expansion if you hold off implementing it until you have experienced enough of the base game beforehand.

All Games that Glisten are Not Gold

While some of our purchases will be guided by online sales and widespread excitement for new games, we will often get more value out of picking up an expansion for a game we already own. Expansions commonly cost less and integrate seamlessly into our established gaming sessions, but are easy to overlook because they typically generate less buzz than brand new games.

Even when electing to purchase a new game, it is worth taking into account what expansions are and will be available for that game. Surely, you should not purchase a game simply because it has an expansion or two, but their existence alone suggests opportunities to keep that game fresh over a longer period of time.

Next time you find yourself preparing to expand your collection, be sure not to underestimate the value of expansions. Collectively, they are the most conspicuous set of “hidden gems” in gaming today.

What do you think about To Expand or Not to Expand?? Give us your opinions in the comments below! 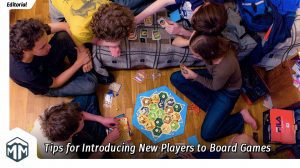 Tips for Introducing New Players to Board Games

In this guide, we explore techniques for leading your friends and family into becoming willing and enthusiastic gaming partners.

Avid board gamer and running enthusiast. I make board game reviews on youtube.com/gamefondue and would happy to play a game with you on boardgamearena as Game Fondue. Be warned, I have been told I talk too fast.