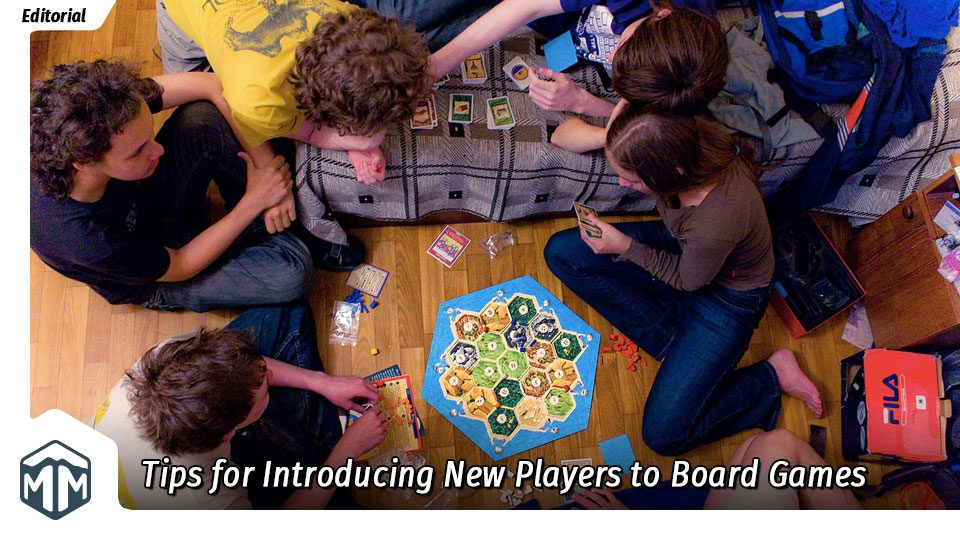 Dave Seiler @gamefondue
In this guide, we explore techniques for leading your friends and family into becoming willing and enthusiastic gaming partners.

Games bring us the most joy when we play them. Unfortunately, some of us do not get to game as often as we would like because we cannot reliably find people to play with. Scheduling conflicts with our fellow local gaming enthusiasts may be difficult to overcome, but converting our reluctant friends and family into willing participants at our next game night is often more achievable than we realize.

Fundamentally, people like games, even people outside the hobby gaming community. Sporting events (games with heavy physical components) attract billions of viewers worldwide every year. In fact, 19 of the 20 most-watched events in US history are Super Bowls [1] [2] [3]. It doesn’t end there, though. In the last 50 years, the video game industry has grown to over $100 billion in annual revenues and even modern political campaigns seem to play out like games in their own right.

It is clear that games are deeply embedded in the culture of our world. With this in mind, let’s explore techniques for converting our friends and family into gamers by tapping into their innate appreciation for games.

Players are most likely to get excited for their second game night if they had a good time at their first. Like weddings and other affairs, crafting a reliably enjoyable gaming experience for your guests begins in the planning stages.

When approaching a skeptical would-be gamer, it is important to be especially accommodating. Their first gaming experience should be aligned as closely as possible with their normal lifestyle in order to prevent gaming from seeming burdensome or overwhelming. Simple ways to address this are to suggest playing at their home, arranging a potluck, or adding gaming to an event you would otherwise all attend.

Once the arrangements have been made, it is time to select the games. Criteria for selecting games will fluctuate based on the targeted group, but we will focus on general guidelines for choosing games for players with virtually no background in board gaming.

Though situations will vary, it is usually appropriate to pick one “main event game” that plays in about one hour and another that plays significantly faster and requires almost no rules explanation. For this second category, games like No Thanks, Birds of a Feather, and Las Vegas typically work well.

Because it is expected that a larger portion of time will be allotted to playing the “main event game,” it carries much more weight in everyone’s overall enjoyment of the session. As a result, there are several important considerations to take into account during its selection process. Firstly, dispel the notion of the “gateway game.”

I have witnessed long-time gamers introduce “gateway games” they did not personally enjoy to new players, simply because conventional wisdom classified the game as a “gateway.” This approach inherently assumes the only acceptable means of converting a gamer requires them to move on to playing heavier games. In reality, it is common and perfectly reasonable for new converts to want to play a game they enjoyed multiple times without a strong desire to learn others (especially those of the heavier variety). 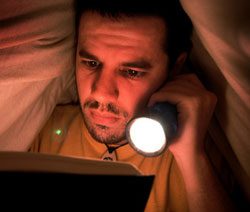 Every game requires a certain degree of commitment just to learn its rules. Naturally, not every gamer will want to study scores of rulesets and doing so is in no way a pre-requisite for gamerhood. For many, learning new rules is exactly the type of cumbersome activity they wish to avoid. As such, it is critical to select a game you are comfortable teaching without additional aid. Nothing limits faith in a gaming session faster than the teacher frantically scouring the rulebook between sentences. 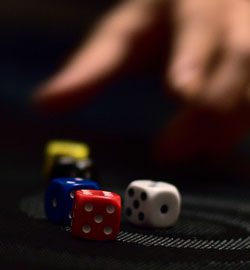 Randomness serves to counteract skill differentials and makes the game feel more fair. Indeed, it is possible for random elements to work against new players, but attributing a loss to a bad spot of luck often feels less disheartening than being mercilessly beaten into submission by a clearly more adept opponent (think chess). Because one of the great draws to tabletop games is the ability for each player to make their own decisions, however, too much in-game luck can actually reduce the fun factor.

One way to prevent the randomness of in-game elements from dictating the experience is to select games with meaningful player interaction. Interactive game elements promote engagement outside of a player’s own turn by establishing the possibility that another player’s decisions will impact one’s own. When new players agree to play a game, they do so expecting to have a good time with their friends. In today’s digital age, there is something especially exciting about interacting face-to-face and it is best to select games that encourage this behavior.

Despite my strong support of games with direct player interaction, I do not recommend introducing most new players to cooperative games. Because of their inexperience, even the most outgoing new players have a tendency to run every decision by the table-leader, which removes the individual decision-making elements and, ironically, the interactive elements from the game. The result is one player essentially playing by his or herself while everyone else watches.

It can also be beneficial to choose a game that is readily available in the marketplace. On multiple occasions, I have seen new players purchase a game they liked shortly after playing it. If this ever happens, you know you have succeeded in converting a new gamer, so why eliminate the possibility?

Of course, what constitutes a proper selection will vary between groups. Some examples of games that may work well for different group configurations include Ra, Stone Age, and Cosmic Encounter. Ra has proven to be a safe choice for a diverse group because it contains very simple, yet deeply meaningful decision-making laced with random tile draws and bound together with interactive auctions. Stone Age offers a wider range of options while forcing players to compete for limited resources. It also features plenty of dice-rolling, which mitigates the barrier to entry. 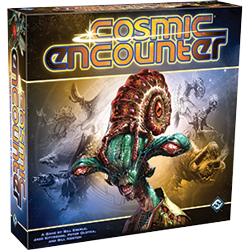 The most specialized option of the three is Cosmic Encounter. With a simple ruleset, it offers a unique political experience where players are given the freedom to form alliances and negotiate trade deals. Unfortunately for some, betrayal also tends to run rampant, so it is not appropriate for everyone. As mentioned above, these are by no means the only introductory options. As long as you follow these guidelines, take your target group into account, and choose a game you personally enjoy, you can be confident in your selection!

To make matters simple for the new players, bring only the games you are expecting to play. It is impractical and unreasonable for players with no background in gaming to select a game from a pool based solely on mechanics that will have no meaning to them. If possible, begin with the “main event game.”

The purpose of the short, fast game is to provide players who wish to keep playing after the main event a change of pace without forcing them to memorize additional rules. It is imperative that this game does not overstay its welcome. A new player is more likely to enjoy their first gaming experience if it errs on the shorter side, rather than if it feels like it’s dragging on. In some cases, this smaller game will not be played, but its presence alone suggests there are more games to try and the hobby is worth indulging.

Perhaps nothing is as critical to the success of a game night as how well the rules are explained. A vastly underappreciated aspect of what makes a gaming experience pleasurable is how well the players understand the rules going into it. First impressions are critically important to how players view games. It is not unusual (nor should it be) for a player who had a poor initial experience with a game to never want to play it again.

When explaining the rules, do not provide strategic commentary. Feel free to ask comprehension questions such as “why might I do this?” while providing examples, but do not make strategic recommendations unless they pertain strictly to mechanical function. People naturally resist being controlled, and telling other players what moves they should make often comes across as controlling. Not a winning combination!

Another issue with providing strategic advice is it is almost always self-serving. Using your experience to pit new players against one another for personal gain will not make them want to play with you again. Instead, offer your group a rich understanding of their options and instill confidence in them by letting them make their own decisions. In doing so, you are demonstrating your trust for the game to craft the experience it was designed to. Also, don’t forget that if you selected a game you do not enjoy, the other players probably aren’t going to enjoy it either.

As the game progresses, it should quickly become apparent which players are enjoying themselves. If players seem confused, offer to lay out their options for them without impeding their ability to make their own decisions. Let the game work itself out and more often than not, the end result will be satisfying.

Setting Up the Next Table

When all goes well, try scheduling another gaming event more to your style. Regardless of how your normal sessions play out, be willing to play the same game again with your new converts and do not overwhelm them with new rulesets. Feel free to gradually introduce other games over time, but understand that many people are happiest with those they are most familiar with (think of the commercial success of Monopoly).

If things didn’t pan out, however, don’t give up. Try to avoid placing blame on the group. Instead, focus on the elements you can control such as the game selection and the rules explanation. Feel free to ask the less than satisfied participants where they felt things went awry and I am sure you will gain some helpful insights. Use this information to improve your next approach!

Sometimes certain games just won’t click for certain people, but if you are reasonably accommodating, make a strong game selection, and provide a clear rules explanation, you may be surprised just how big your gaming group can grow. After all, people like games.

What do you think about Tips for Introducing New Players to Board Games? Give us your opinions in the comments below, or on Twitter and Facebook! 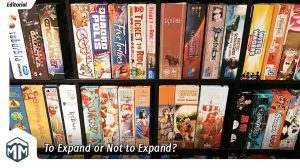 To Expand or Not to Expand?

Thinking about expanding your game collection? This guide focuses on when and why purchasing an expansion can actually be our best move.

Avid board gamer and running enthusiast. I make board game reviews on youtube.com/gamefondue and would happy to play a game with you on boardgamearena as Game Fondue. Be warned, I have been told I talk too fast.