First Take Fridays are a celebration of the ‘first time’ we played a game. Come see what our writers think about Anachrony, Montana, Skulk Hollow, and Railroad Rivals. 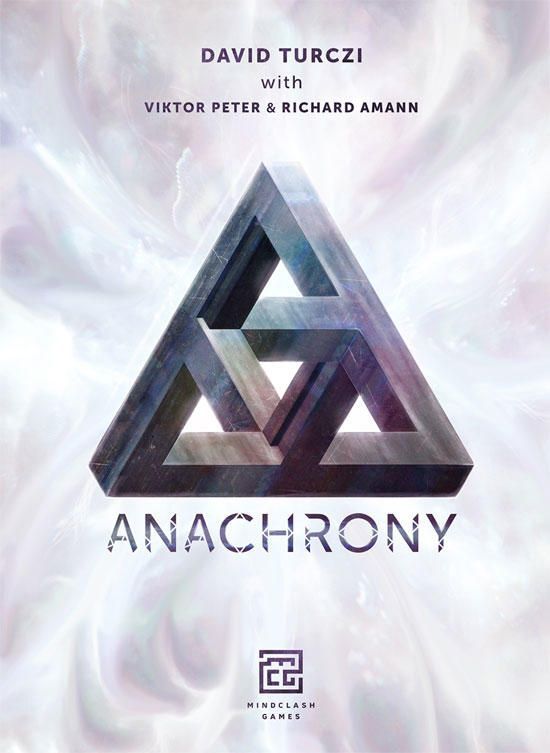 Whoa. This game is big – in every sense of the word. I was instantly drawn to Anachrony because of the name Dávid Turczi, a relatively new designer with fascinating versatility. He’s worked on big games like Cerebria and Teotihuacan, lighter games like Kitchen Rush, and even a roll-and-write (Welcome to Dino World). Dávid Turczi seems to be able to do it all, and do it well.

Anachrony is a futuristic game in which players try to secure the future of humanity by following their ideology (Path). This is done using a two-tiered worker placement system where players take actions on their player board or power up Exosuits to send their workers to the Capital (the main board). There is also an element of time travel as each round you may borrow resources from your future self. Beware: if you borrow too much, you will create temporal Paradoxes and Anomalies (lose victory points).

Anachrony is brilliant because of the way players must manage their resources, workers, and time. Progress too quickly and you will overwork your crew, losing morale (victory points). Progress too slowly and you’ll miss out on building opportunities (more victory points). Every action you take is important; if you don’t plan, you can bet the following round you will be one Energy Core short of powering up an Exosuit needed to take a Capital action.

As wonderful as this game is, Anachrony is difficult to jump in to initially. The number of components and rulebook pages, the setup time, and the table presence all felt very overwhelming. My first round, I stared at the board completely unsure of where to begin, but after a few turns, I was completely engaged. The slow, rough start? Well, it no longer mattered. 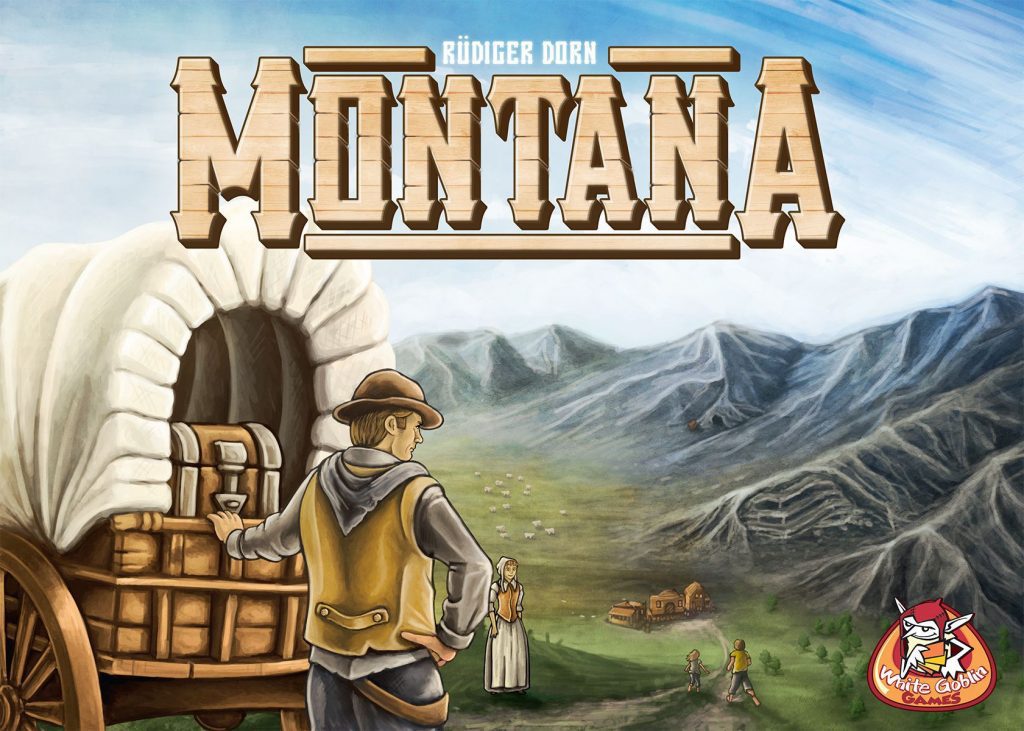 Rüdiger Dorn is a guy that consistently puts out games that really appeal to me; from more obscure titles like Goa and Arkadia to his more well known games like Istanbul and Las Vegas. It’s hard to describe his style because his games are all over the map and vary greatly in theme and complexity. But they’re always intriguing. That is why I was excited when I saw Montana: Heritage Edition pop up on Kickstarter late last year. Here was an interesting looking game from a designer that I trust and illustrated by none other than the inestimable Klemens Franz. Backing the project was a no-brainer. And then the wait began.

The wait came to an end last week when Montana: HE arrived on my front porch. I eagerly tore into it and got everything punched and sorted. Not too long after, my wife and I started playing. In Montana, you’re racing your opponents to be the first person to construct all of your towns. The gameplay area, which I assume represents the state of Montana, is comprised of randomly selected and placed hexagonal tiles which are, in turn, broken up into smaller hexes. Each hex shows the resources needed to build on that hex. These resources are gathered by sending your workers to town and these workers are gathered by spinning a dial to determine which workers you will receive. This is important because each town action requires a specific worker type to perform the action.

In a way, Montana kind of pits you against yourself as you’re forced to choose between collecting more workers or hoarding resources in an effort to build as much as you can as fast as you can. In our two player game, there wasn’t a lot of player interaction between my wife and I. There were a few times that I could have built a town or two, but looking at the resources she’d gathered, I realized that building in those locations would open opportunities which she could capitalize upon, so I opted to not build as much as I could. In the end, this turned out to be the right strategy because I won the game.

While not as deep and complex as a lot of the games I enjoy playing, Montana was still pretty solid and offered opportunities for long-term strategy. It also had the benefit of playing pretty quickly. Our first game only lasted maybe 30 minutes and that was with teaching. I really enjoyed it and look forward to playing it again soon. 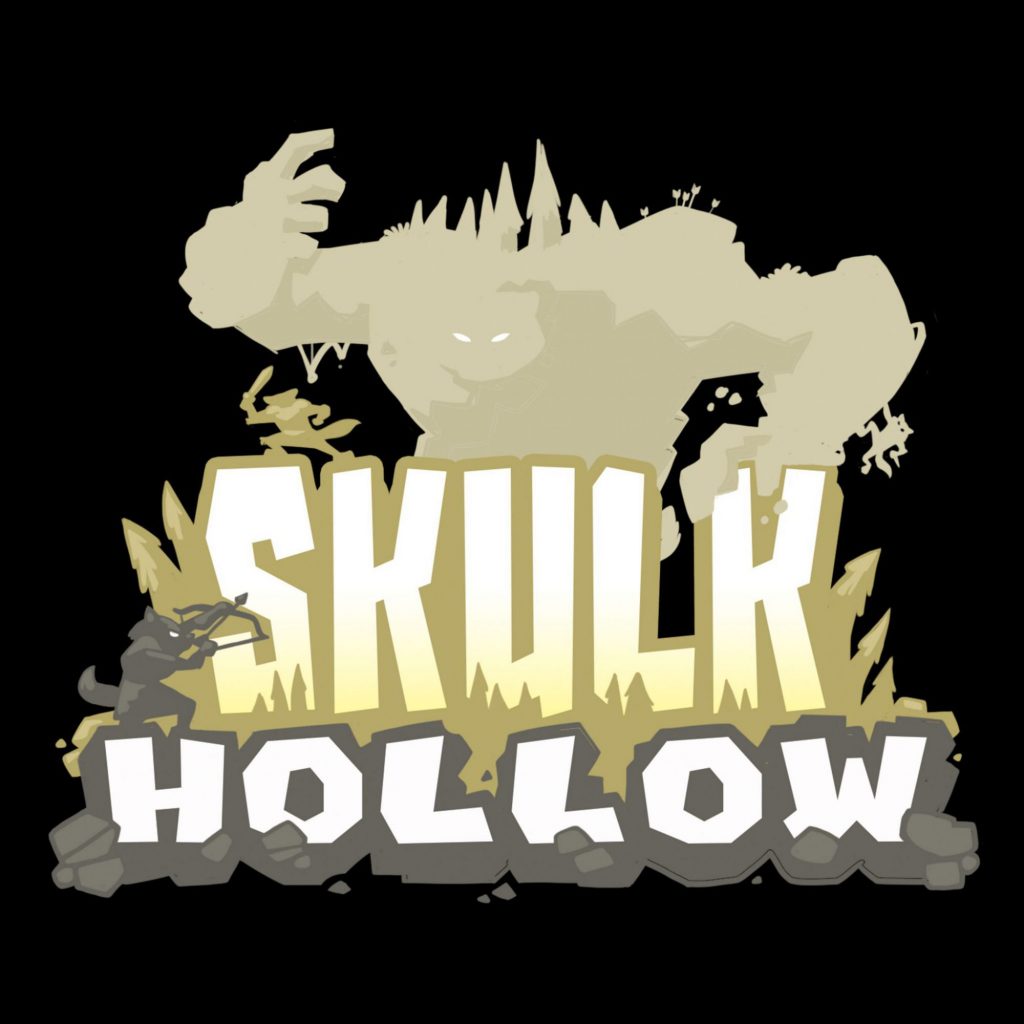 If you ever wanted to play a board game adaptation of the old classic Playstation game “Shadows of Colossus” then look no further than Skulk Hollow.  Skulk Hollow is a game about opposites. A singular, giant monster against a small horde of foxen. A tough, devastating foe and small soft targets that must chip away at their larger adversary in small bits.

Skulk Hollow is produced by Pencil First Games who brought you stellar titles like Sunset Over Water and Herbaceous. This newest title continues their tradition of delivering great content in a relatively small box. Skulk Hollow plays quickly over a series of rounds going back and forth between the Foxen and the Guardian until one side achieves victory.

Skulk Hollow combines some hand management and board positioning to create a very intense struggle on both sides. While this game says ages 8 and up this is definitely not a child’s game.   The decisions you make matter and if you choose poorly you will suffer for it.

Where Skulk hollow shines the most though is the uniqueness of its table presence.  There is a secondary board for the monster that the Foxen heros must “leap” to in order to traverse its massive body and deal damage to key areas if they wish to take the enemy down. This creates a really interesting puzzle as you must manage what is happening on two boards simultaneously.

Skulk Hollow is a beautiful game, and while it appears soft and lighthearted, the gameplay is much more punishing and tactical.  There is a small learning curve on the cards and what actions are best in which situations but with several Foxen leaders and guardians to choose from this game offers amazing replayability.  All this and it plays in about 30 minutes gives Skulk Hollow a very welcome spot in my must have collection. 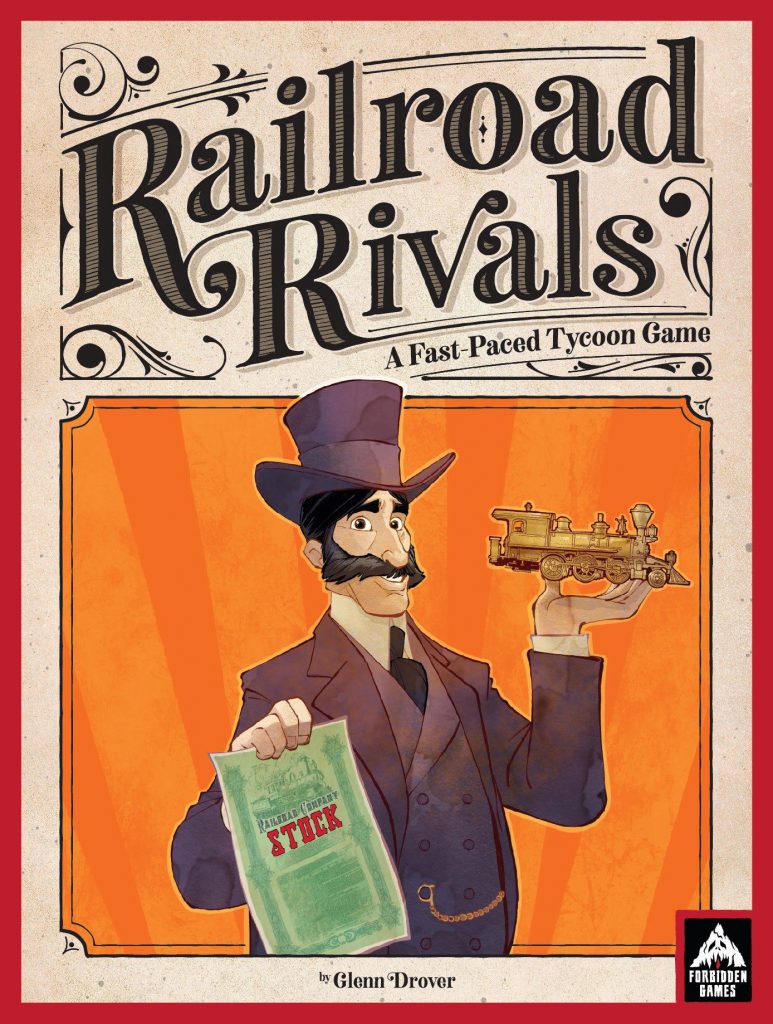 Train games are “a thing” in the gaming world, a big one in fact. Yet most people’s experience with train games stops at Mexican Train Dominoes, or perhaps Ticket to Ride. Railroad Rivals was created by Glenn Drover, who designed one of the most well known and popular train games Railways of the World (also called Railroad Tycoon).

Railroad Rivals is a “fast paced tycoon game” in which players build railroad connections between cities, collect stock in one of a dozen railroad companies, and finally ship goods using those railroad connections. It plays 1 – 5 people in 30-60 minutes (although our time for for a 5 player game was definitely longer than 60 minutes). I first heard about this game when it debuted on Kickstarter last year. Billing itself as a “fast-play tile drafting and laying game” it immediately drew my attention. After our first play, I knew this is one I’d want to get to the table again.

Railroad Rivals is a solidly put together game with thick cardboard city and stock tiles, chunky wooden train pieces, an embroidered resource bag, and great character illustrations. The game itself is a really interested balance of knowing when to take stock tiles (so that you can earn more points), and when to take city tiles so that you can try to set yourself up for shipping goods later in the round. It reminds me a bit of one of my personal favorite train games, Mini Rails. It’s a very clever combination of mechanisms and it works really well. If you get a chance to play Railroad Rivals, I’d definitely suggest doing so…but perhaps shoot for 3-4 players instead of 5.