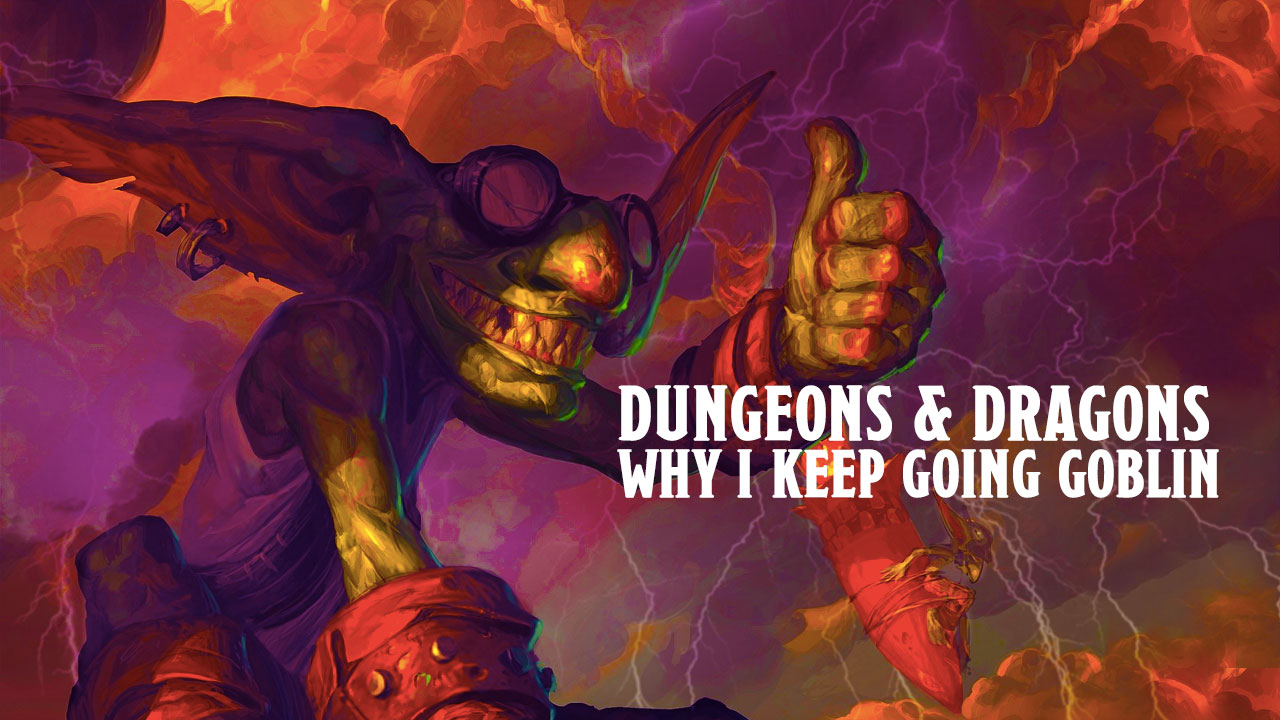 I’ve been playing Dungeons & Dragons for 20+ years, and in that time I’ve managed to create and play three goblins out of my last five characters. If you’ve played D&D for any length of time, you can probably imagine that few groups appreciate the dude that keeps showing up with goblins when the rest of the party are elves, humans, and dwarves.

In fact, the first time I introduced a goblin to the party, I had taken a turn at being the DM. I did a double no-no on that adventure – introducing the goblin while setting them up in a dream adventure. I had my reasons; I wanted to throw in a lot of puzzles and other weird stuff into a world our regular DM was running without messing anything up. The moment the players realized that it was a dream, they groaned, so… damage done. I still introduced my new player character, a goblin named Glink. Not only was he a goblin, but he was a thieving rogue goblin. Having killed nine goblins earlier on in the same adventure, the other players lacked much trust in goblins and kept Glink bound up and weaponless for quite some time. I found the experience to be an exciting and welcome change from my ho hum quiet monk.

Moreover, it gave me a safe environment to explore an uncomfortable topic: race relations. Growing up, some might call me mixed, or black and white. My life has been quite different than most in America. Make no mistake – despite some of the undesirable run-ins I’ve had, I am happy to be different. The benefits have outweighed the disadvantages..

In Dungeons & Dragons, while humanity didn’t have ethnic racism, it still set up biologically diverse fantasy races, each with their own preconceived prejudices and interactions. Gnomes hate goblins, dwarves sneer at elves, and of course elves look down at everyone else. No one likes orcs, yet we have half-orcs and half-elves and all that can entail. Goblins, orcs, and various other “monster” races have always been inherently evil by default. In a lot of ways I feel that our fantasy follows the world’s example: humans are usually the growing European colonizers while elves, dwarves, etc represent the other types of cultures in our world. I’m not the first to examine this as Paul Sturtevant explores in Race: The Original Sin of the Fantasy Genre. A lot of this comes through Tolkien.

Of course, it goes deeper than Tolkien and that era. Dungeons & Dragons is storytelling entertainment and conflict is what most of our stories are about. In addition, our species tends to group things to make life easier, and “us vs them” makes life a whole lot easier to navigate, despite the evil it may perpetuate. This mentality gives us enemies that are tactically challenging to face while easy to attack without questioning the morality of our characters.  Monsters provide conflict without true consequences.

Whether it’s biological necessity or my personality, I find it easy to challenge the status quo of “us vs them” and to try to see things from the perspective of the other sides. When I see a group of goblins in a game, I don’t just dismiss them as cannon fodder. I know it could be different, that goblins could act differently. For me it was intriguing to see how other characters would overcome their natural expectations of goblin behavior.

So next chance I got, I played a goblin cleric. My dungeon master and I were co-designing a world and I had some freedom with back story. So I implicitly made goblin society a bit more civilized. In addition to not being inherently evil or chaotic, they had typical inheritance rules for the chief of their tribes. My character was no longer rebelling against his people, but was fulfilling the bargain his parents made to the god of war. He was sent to be raised by the church to become a cleric. As a faithful servant to the god of war, my goblin was a mercenary for hire. As it turned out, most of the characters were weird. I was just another part of the crew.

As our society has changed in how it discusses things such as race, gender, etc; so has role-playing interactions. Players are less enthusiastic about treating goblin player characters with such little initial respect even in a typical D&D world. In a campaign where the goblins have not been specifically addressed, I brought a goblin pretending to be a gnome into a party of dwarves and fae kind. His backstory is that he went out into the world and became disgruntled with his treatment by gnomes and set out to embarrass their entire race. During the 4th or 5th session of the campaign, my disguise was blown away – figuratively and literally – by a backfiring pistol due to a bad roll. Ultimately, my party decided to just go on with business as usual. I had helped them so far and I had given them no other cause to doubt me.

As L.E.H. Light notes in her article, Why I Didn’t Play Dungeons and Dragons and Why I Started, standard D&D worlds still consider goblins and various other races to be inherently evil. It’s a good article that I recommend reading. I’m hoping to change the story about how the whole world treats and imagines goblins, and I’ll probably keep playing this race until we all change how we interact with “them.”

Paizo, the company behind Pathfinder, encourages players to explore goblins even if they aren’t normally appropriate for their Pathfinder Society adventures. They have goblins featured as player characters in free modules that they release as part of Free RPG Day. This year was their 6th goblin featured module since 2011. Perhaps you’ll want to join me in going goblin!

Is It Time to Abandon Battlestar Galactica (The Board Game)?

Chinatown Review – I’ll Give You $5 to Read This Review

Gartenbau Review: How Does Your Garden Grow?