From time to time there is a discussion around whether or not something is a game or an activity – Apples to Apples comes to mind. These are games which have minimal depth of strategy and derive their enjoyment more from the social interaction than the rules and gameplay. Recently, Spiel de Jahres nominee The Mind has renewed this debate amongst board gamers. Read on to find out if it might be a game for you. 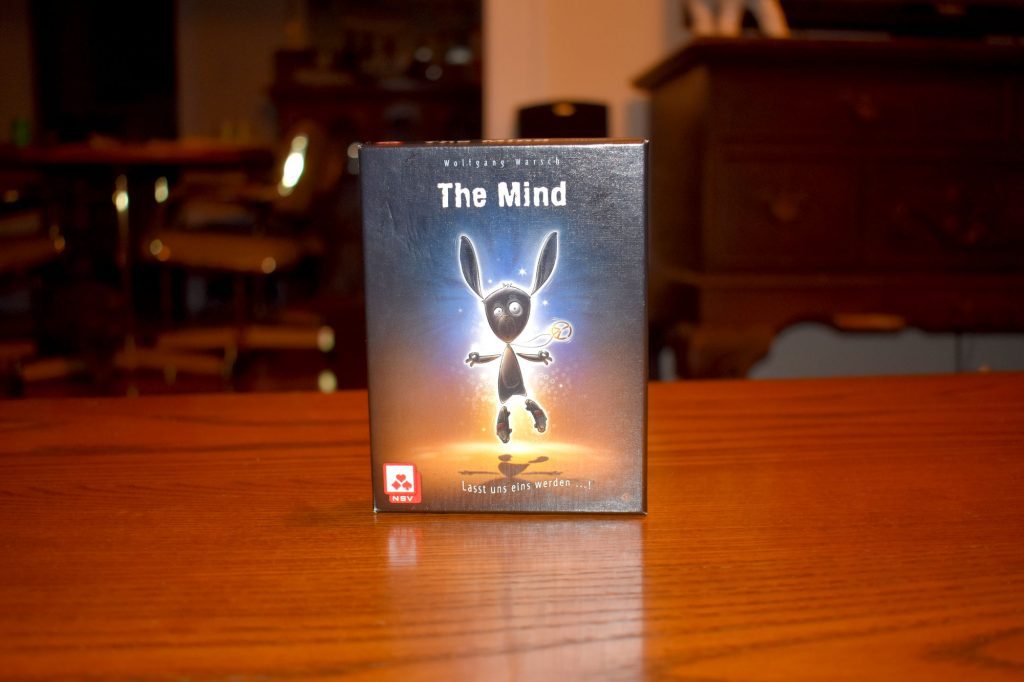 The rules of The Mind are simple: starting from a uniquely numbered deck (from 1 to 100), players are each dealt cards equal to the current level (1 card per player in level one, 2 cards per player in level two, etc). Then as a group the players must play all of their cards in order from smallest to largest.

The trick? Players can’t talk; they have to read each other’s’ minds (hence the name) to know when to play the cards. The players play for 12, 10, or 8 rounds for 2, 3, or 4 players and if they don’t run out of lives by the end, they win the game.

The debate surrounding The Mind revolves around the structure of the game and the forced constraints put on the players. Clearly, if players could talk, the exercise of playing all of your cards in order would be a trivial one. Since players can’t communicate, they have to understand the cues their teammates are providing in order to know when to play. This isn’t dissimilar to Magic Maze where players are trying to move pawns out of a building and players are constrained about how they are allowed to move pieces. In Magic Maze players are also not allowed to talk.

I really enjoy The Mind. There are two things that really stand out about the game to me. First, the gameplay taps into something more primal and instinctual than other games. So many modern games revolve around mechanisms like set collection, resource management, worker placement, and deck building. Though I enjoy many games with each of these mechanisms, they feel contrived, like they were invented by the board gaming hobby. The Mind focuses entirely on a more instinctual, gameplay centered around observation instead of what you plan. This notion of relying on more primal mechanisms is present in negotiation games like Chinatown and Sidereal Confluence and drives much of my excitement for those games.

The second aspect of The Mind that really stands out is how the game is nearly entirely based on the meta experience of the group . As you’re playing, you’ll quickly learn what cues to focus on in your teammates and how to read their body language. This degree of meta is only really present in games that are entirely auction driven like Modern Art and Neue Heimat, but in those games the meta is contingent on the game and not the people around you as it is in The Mind.

The two reasons that I cherish my copy of The Mind may be exactly why many critics write it off as an activity and not a game. I can’t blame them for not enjoying a game that is more driven by the experience of the game than the decisions you’re making. I can also certainly see where they are coming from; if The Mind took two hours to play, I would probably agree with them. In my experience though, the groups I’ve played with usually succeed or fail within 15-20 minutes.

Knowing how divisive The Mind has been in the board gaming community, I can’t recommend it to everyone, but I can definitively say I’ve enjoyed it. Fortunately, at the price point, or Print n’ Play-ability of the game, I can say it is something you should seek out if this sounds enticing at all to you.