Ganz schön clever Review – Clever is as Clever Does

If you follow along with board gaming news, you might have been scratching your head at the announcement of the “roll and write” game Ganz schön clever being nominated for the “gamers game” award, the Kennerspiel des Jahres. “They nominated a game like Yahtzee?” you might ask. But you’d be selling this game short. 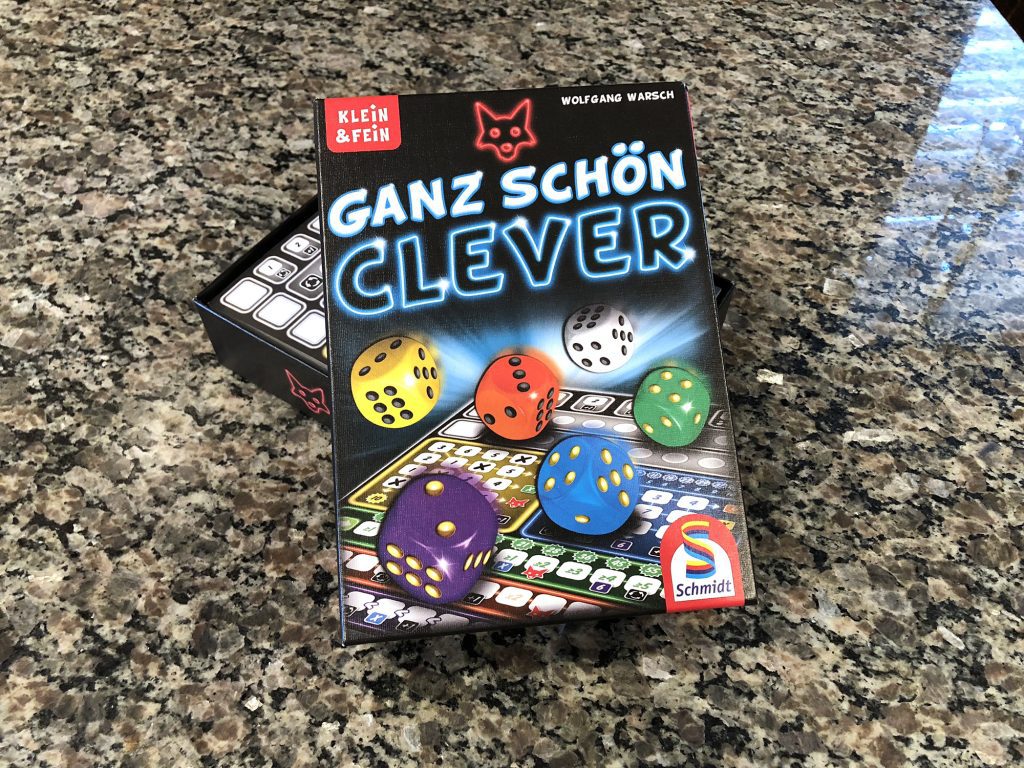 Let’s dive in and see if this Kennerspiel nominee deserves its place in the spotlight. But before we do, it’s worth mentioning that the designer of this game, Wolfgang Warsch, is nominated for two awards this year. He’s also the designer of the Spiel des Jahres nominated card game The Mind. Check out our review of The Mind for more details.

And now on to the main event.

Ganz schön clever takes place over a number of rounds in which each player gets up to 3 rolls of the dice. After each roll, the active player selects one of the dice to place on their scoring sheet taking the action associated with that dice. Any dice which are lower in value than the chosen one are placed onto a faux silver tray printed on the game’s insert. The player then rolls again, and will again make the same choice. When there are either no more dice left to roll, or the player has rolled 3 times, their turn is over. Then each other player is allowed to select one of the dice from the silver tray and score it according to its color. Play rotates to the next player until the game is complete. Total up the scores of each player and the one with the most points is the winner. 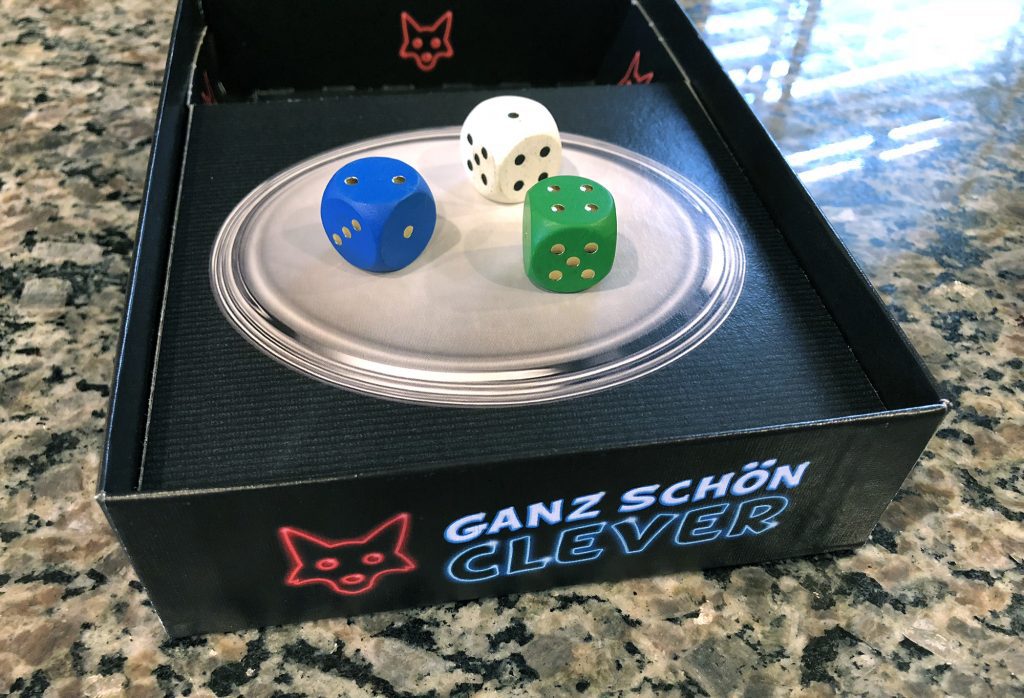 It’s not often that you can explain how to play a game in a single paragraph, but this is the meat of the game. The observant among you might ask “but what about scoring?”, so let’s quickly cover that. Ganz schön clever’s scoring sheet is broken down into 5 scoring sections, each related to a die of the matching color. Note that there’s no white scoring section; instead the white die can be used as any other color. 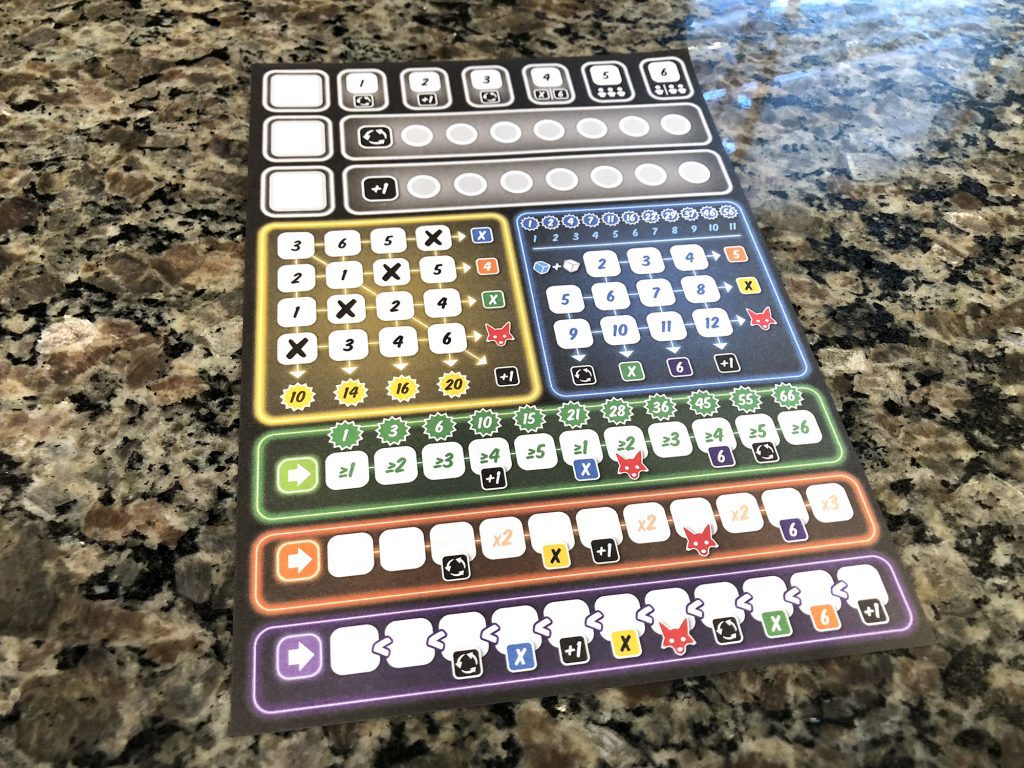 Yellow – The player writes an X on a space matching the die value. Players receive points for completing columns.

Blue – Tally the current value of the blue and white dice, write an X in the matching square. Players receive points based on the total number of squares marked off in the blue section.

Green – Write an X into the leftmost section if the selected die meets the criteria of the space. For instance, to write an X into the first green space you must have selected a green 1 or higher. Players receive the point value above the furthest space with an X.

Orange – Write in the pip value of any chosen dice. If the space has a multiple (x2) on it, write in the result instead. Players receive points equal to the sum of all orange spaces.

If the game had remained at this level it would likely have been relegated to the bargain bin. But instead Wolfgang Warsch included a number of bonuses sprinkled throughout the game. These bonuses act as force multipliers giving the clever player the ability to mark an additional X or number into a given scoring section. In fact, if players plan previous turns well, they can chain together multiple combos and truly maximize their scores.

At the end of the game, the value of a fox is equal to the value of the lowest scored section on a player’s sheet. If the yellow section is the lowest with a score of 14 then each fox would be worth 14 points. So if foxes are part of your scoring plan, then you’ll need to make sure to get at least some points in every section to maximize your end game score.

There’s been an absolute explosion of roll and write games over the past 5-10 years. At current count somewhere over 100 games could be grouped into that category (with more being added monthly), from themeless games like Yahtzee, to country themed roll and writes like Rolling America. Train themed games like Steamrollers, farming games like Harvest Dice, and dice versions of euro classics like The Castles of Burgundy (the dice game).

No one really knows why this craze is going so strong, but I like to think that it’s fueled in part by designers intentionally limiting themselves; striving to distill the essence of a game into the barest of essentials…a handful of components and a distinct and interesting ruleset. Ganz schön clever has accomplished this in spades.

The game starts slowly; the first few rolls won’t net you any points. In fact you’d be lucky to have any points by the end of the first complete round. But if you make good tactical decisions you can really reap the benefits of your planning in later turns. Do you ignore some of the more difficult to build on sections like purple or orange in favor of easy to grab greens, yellows, and blues? Take care not to let any single one of the sections languish or you’ll be hard pressed to catch up when you inevitably land some of the fox bonuses.

In your first few games try to branch out and focus on different sections first to see which ones allow you to most easily gain traction. Yellow is easy, but doesn’t offer as many bonuses as a hard to score purple. But don’t let purple get away from you because once you get past the second space every subsequent space has a bonus. Make sure you take time to examine the board before applying any of your bonuses so that you can take advantage of potential combos.

My only complaint about the game is the layout of the scoring sheet. It’s double sided, with the final tally showing up on the back side. This means that in the scoring phase you’re constantly flipping back and forth. Not a huge deal, but I wish they would have been able to fit it onto the front side and put the actual scoring part on both sides. As it is there’s about 100 sheets in the pad, and the publisher has made a high res version available for free on their website. Users on BoardGameGeek have also made alternate scoring sheets, and this one from Caleb Sohigian is of the best, as it manages to fit everything on a single side. Good work Caleb. 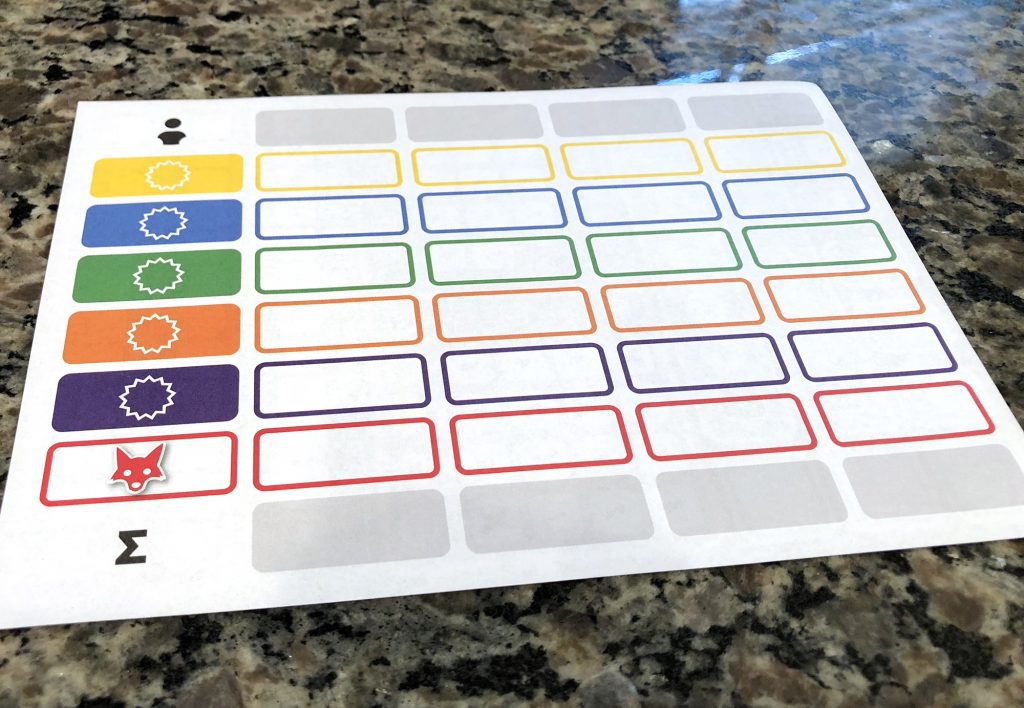 At the time of this review Ganz schön clever isn’t available in the US en masse. You might get lucky and find it through a specialty retailer, or you can do what I did and purchase it directly through Amazon.de. If you have Amazon Prime shipping is “free”, but Amazon will levy a small international fee to your order. I purchased 4 games as part of my order and the fee was about $9.

Ganz schön clever doesn’t have much in the way of components: 6 colored wooden dice, 4 markers, and a score sheet butWolfgang Warsch and Schmidt Spiele have truly outdone themselves with a wonderful take on roll and write. I can see why it’s gotten so popular in Europe as it feels like a typical euro game in dice form.

If you have the chance to play this one, give it a shot. Ganz schön clever won’t let you down!